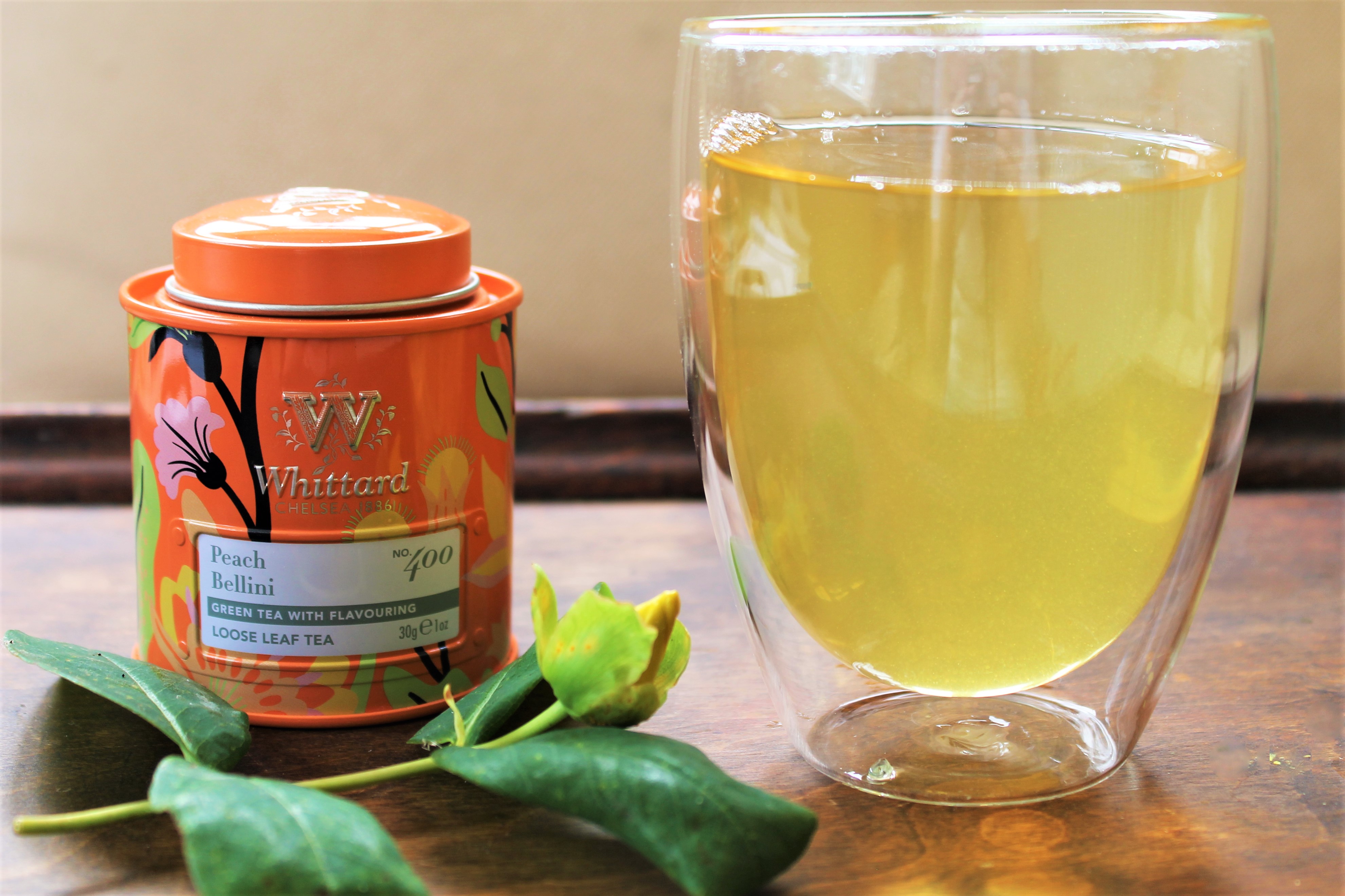 Eating peach slices straight out of a tin is one of my guilty pleasures. I love fruit, especially when it’s soaked in sweet syrup. When a peach flavoured green tea gets on my radar, I have to try it.

I was especially excited because it’s from Whittard, one of my favourite tea brands. Their Jasmine Green Tea is one of the best and I know they generally get their flavoured teas just spot on for my tastes.

I’ve got the Peach Bellini mini caddy edition, which is a peachy tin with tropical illustrations on. I love collecting these tins, I already have several from the Christmas 2018 collection. If you’re like me and want to collect the tin, you’d best order it soon! Otherwise, you can find the loose leaf for this tea in plain packaging on Whittard’s website (at the time of writing).

Peach Green Tea at a Glance

This is a good tea, but it’s not winning any awards.

The peach flavour is tasty but quite obviously fake and the sencha tea quickly overpowers it. A nice-tasting tea, but I know Whittard can do better. 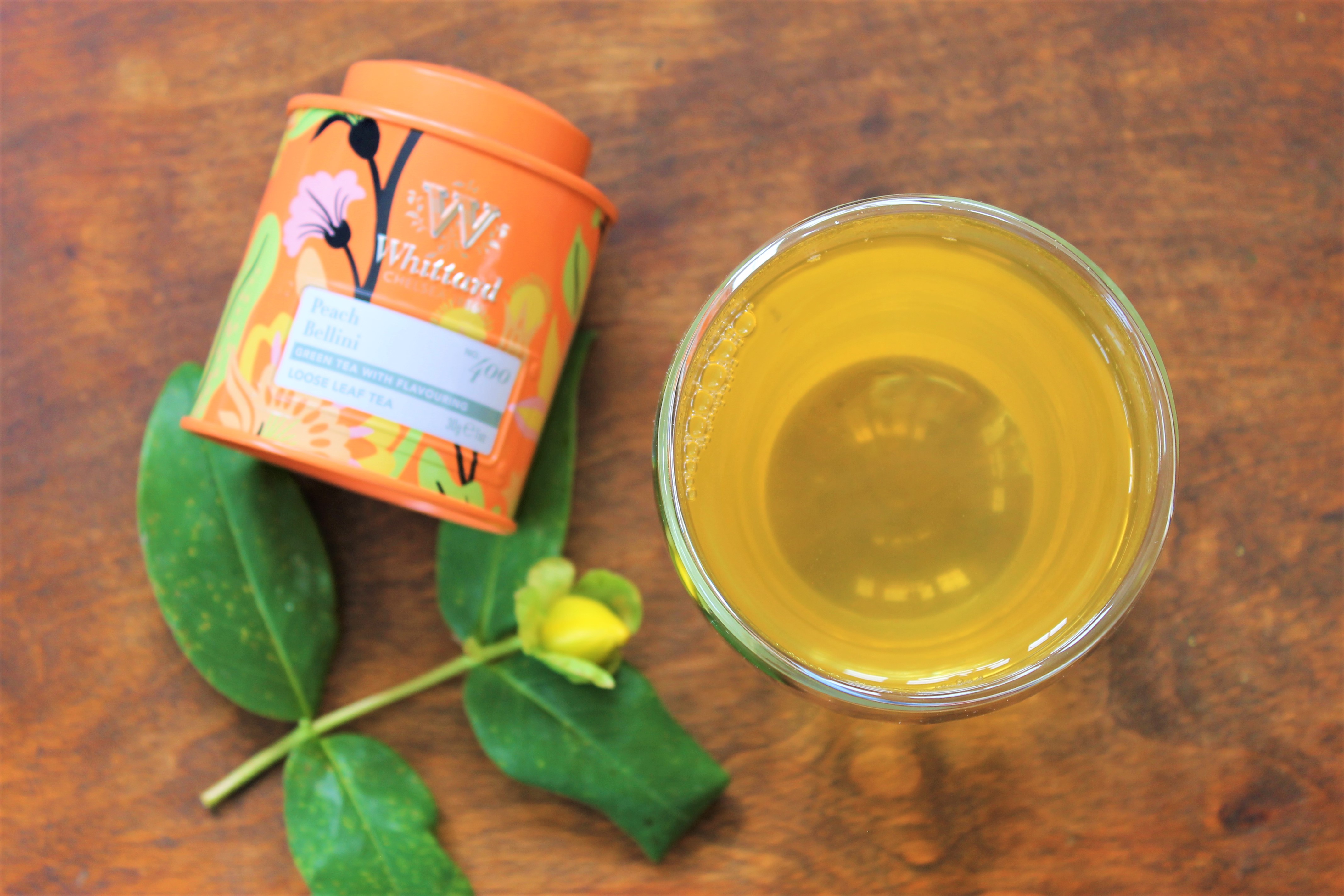 Opening the tea caddy (it has a double lid to keep it airtight) you’re hit with super astringent green tea. It’s very a very fresh aroma, like the smell of freshly cut grass – but less sweet and more bitter. The peach is there but it’s quite tangy and artificial.

I always prefer natural flavourings if the tea maker absolutely can’t use dried fruit pieces, but artificial doesn’t always equal bad tasting. I’m reminded of peach flavoured iced tea from Lipton – it’s fake but still very refreshing. That’s what I wanted from this tea, as it’s a summer blend designed for both hot and cold brewing.

It brews up into a light yellow-lemon liquor with a hint of green. It’s not quite clear but it’s not bitty or dusty either. The Peach Bellini tea aroma is of warm peaches (real, not fake) and slightly bitter green tea.

My first sip is predominantly sencha green tea. It’s astringent, but it feels natural – I’m confident it’s not from over-brewing or scorching the leaves. The peach is sweet and subtle, following the astringent sencha.

It has a slightly sweet aftertaste that lingers in your mouth. At first, the tea is hydrating and fills your mouth with moisture, but after a few seconds it dies down and leaves you with a slightly drying sensation. It’s refreshing and has you constantly reaching for another sip.

How to Brew Green Tea with Peach

I brewed 1 generous teaspoon of Peach Bellini green tea for 3 minutes in 80°C water. This is exactly the method printed on the bottom of the tea tin and I’m impressed that for once it’s spot on.

I also cold brewed the Peach Bellini tea (cold water + 2 teaspoons + 24 hours in the fridge), which resulted in a very similar flavour with a few key differences:

I’d easily drink this tea with a meal or just to sip while I’m in the car, or in the hammock or just while I’m working. It doesn’t scream a particular time of day to me, except I’d probably avoid it first thing in the morning as the astringency could upset your stomach.

A good dose of honey will bring out the peach more and relieve the green tea bitterness.

Why Whittard of Chelsea?

This is one of 3 new summer loose leaf tea blends available. It’s something they do quite regularly now. There were 3 mini caddies for the Chinese New Year and Christmas 2018. I’m sure there will be more throughout the year too.

These tiny caddies hold enough to last me a few months, which is ideal because they’re quite distinctly flavoured. I don’t want to still be drinking summer peach tea in December, so it suits me fine.

One thing I will note about the caddies is that they’re super awkward to store. They look like they’ll stack one on top of another, but they don’t. Instead, they sit awkwardly on the kitchen shelf and take up more space than you’d imagine, as you can’t stack anything on top of them.

It’s good but it’s not great. The sencha is chopped into chunky flakes, with many tiny flakes and specs that linger in the bottom of the caddy. There’s also the problem of artificial flavours and the marigold petals. I’ve had marigold flavoured teas before and they’re lovely – but quite distinct. This is how I know that the marigold petals in the Peach Bellini tea blend are just for aesthetics. You can’t taste their flavour at all.

This is a nice tea, it’s easy to drink and the flavour combination is simple yet well-thought-out. I won’t have any trouble finishing the tea caddy and I’d recommend it to anyone who likes peaches and astringent, refreshing sencha.

The only problem is, it’s just not quite good enough to be called a great tea. If the sencha was smoother, the peaches were juicier and the quality was higher, then maybe I’d up the score.

From peaches and green tea to strawberries and cream, I’ve tried a whole range of herbal and fruit tisanes over the past year. You can search for tea reviews using the tags below, or check out my Tea Review Index where all my reviews are categorised. From acerola and acai to turmeric and vanilla, searching for teas through ingredients is a great way to find something new.