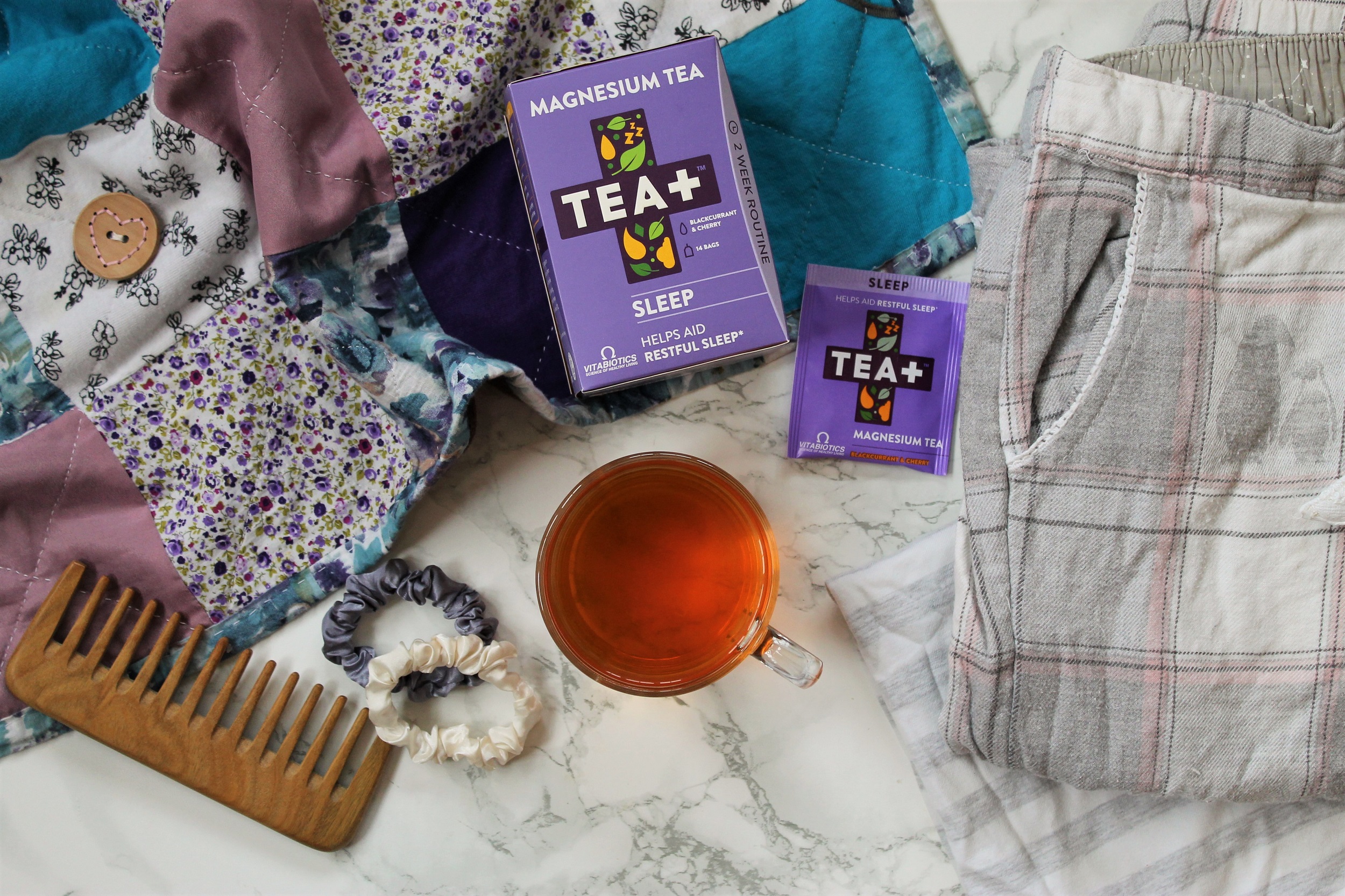 I am a very lucky person! Two weeks in a row I’ve had the pleasure of reviewing teas that have been gifted to me. This week, Tea+ Sleep tea is on the agenda. This is a soothing sleep aid (you can read all the reviews tagged ‘sleep aid’ by going to my Tea Review Index in the menu) that contains a range of herbal ingredients on a rooibos base.

This tea also contains a significant dose of magnesium citrate, which I will explain in more detail below.

Needless to say, this tea is designed to help you fall asleep and have a very restful, peaceful night. I’ve sipped it during the day to note down the flavour profile, and a few nights during the week to see if it really does impact how I sleep.

Tea+ Sleep Tea at a Glance

This tea is really subtle and gentle in flavour, which adds to the calming and soothing properties of this sleep aid. Enriched with magnesium, this rooibos blend is quite charming. 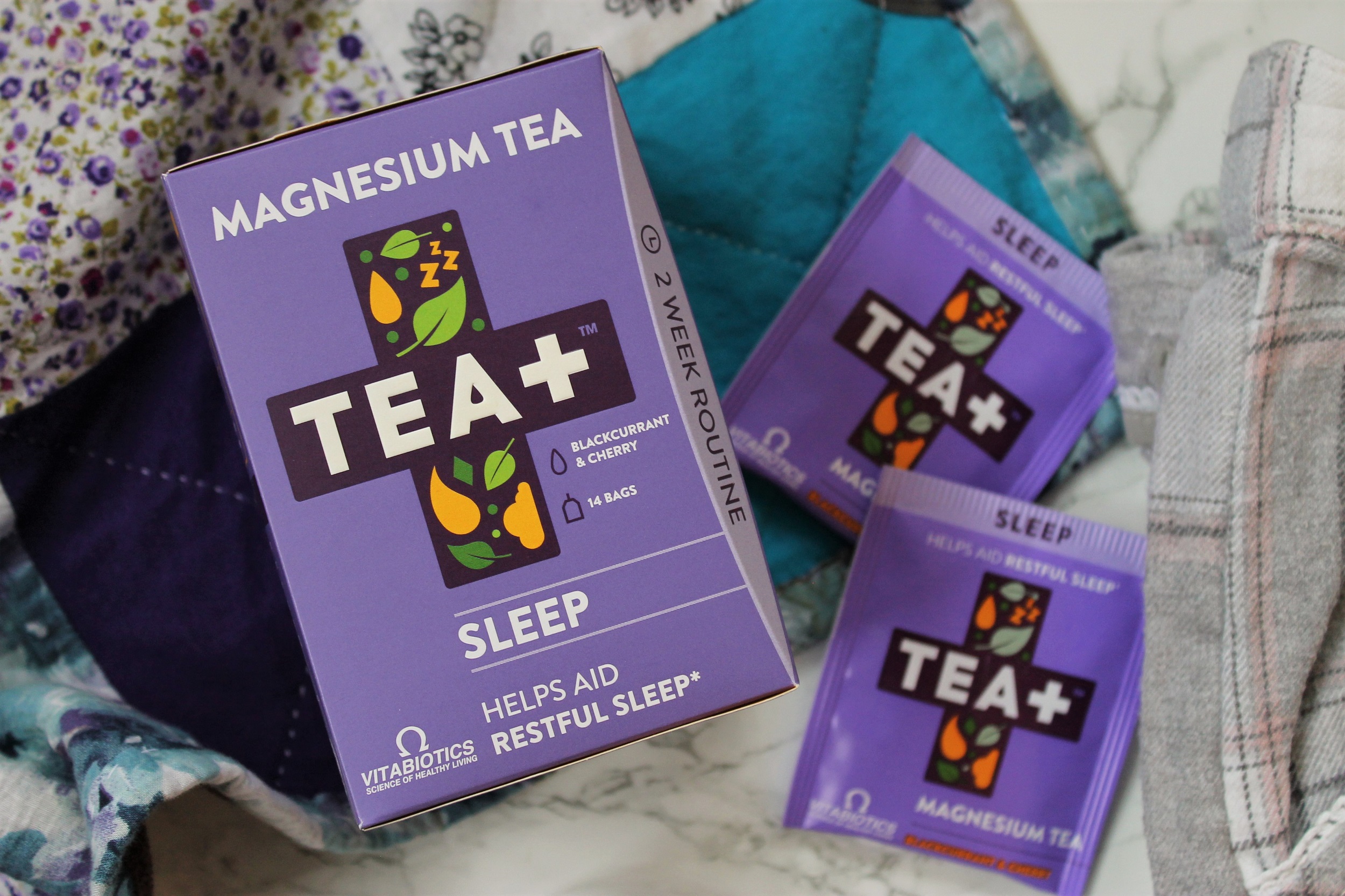 Blackcurrant is not my favourite flavour. I really enjoy eating natural blackcurrants, especially in a summer fruits type dessert, but I’m not keen on that artificial super-sweet Ribena flavour. When you open up your first Tea+ Sleep teabag, you’re met with a subtle but still sweet blackcurrant aroma. It’s slightly medicinal, which is actually a common trait of rooibos tea, so nothing surprising here.

The teabag brews into a light and bright honey orange-amber colour. I also find that the process of brewing a cuppa is really soothing, which gets me in the mood for sleep.

Once brewed, the tea aroma reminds me of hot blackcurrant squash with a generous teaspoon of honey. It’s a childhood memory in a cup, for sure.

I love the flavour of this tea even more than the aroma, however. It’s smooth, subtle and soothing. You’d think that blackcurrant and cherry would create a very strong and sweet flavour, but it’s actually mild and mellow. The chamomile and rooibos give the tea a warm glow and gentleness that’s exactly what you need late at night when you cannot get to sleep.

I tried this tea a few nights in a row and continue to use it when I’m struggling to get to sleep. I have found that it’s quite effective. It won’t make me sleepy if I’m not in the mood for sleep – it’s not a sedative, after all – but it does help me drift off quicker than usual. I’ve also found that it lets me sleep deeper with fewer dreams, and I wake up feeling much more refreshed. 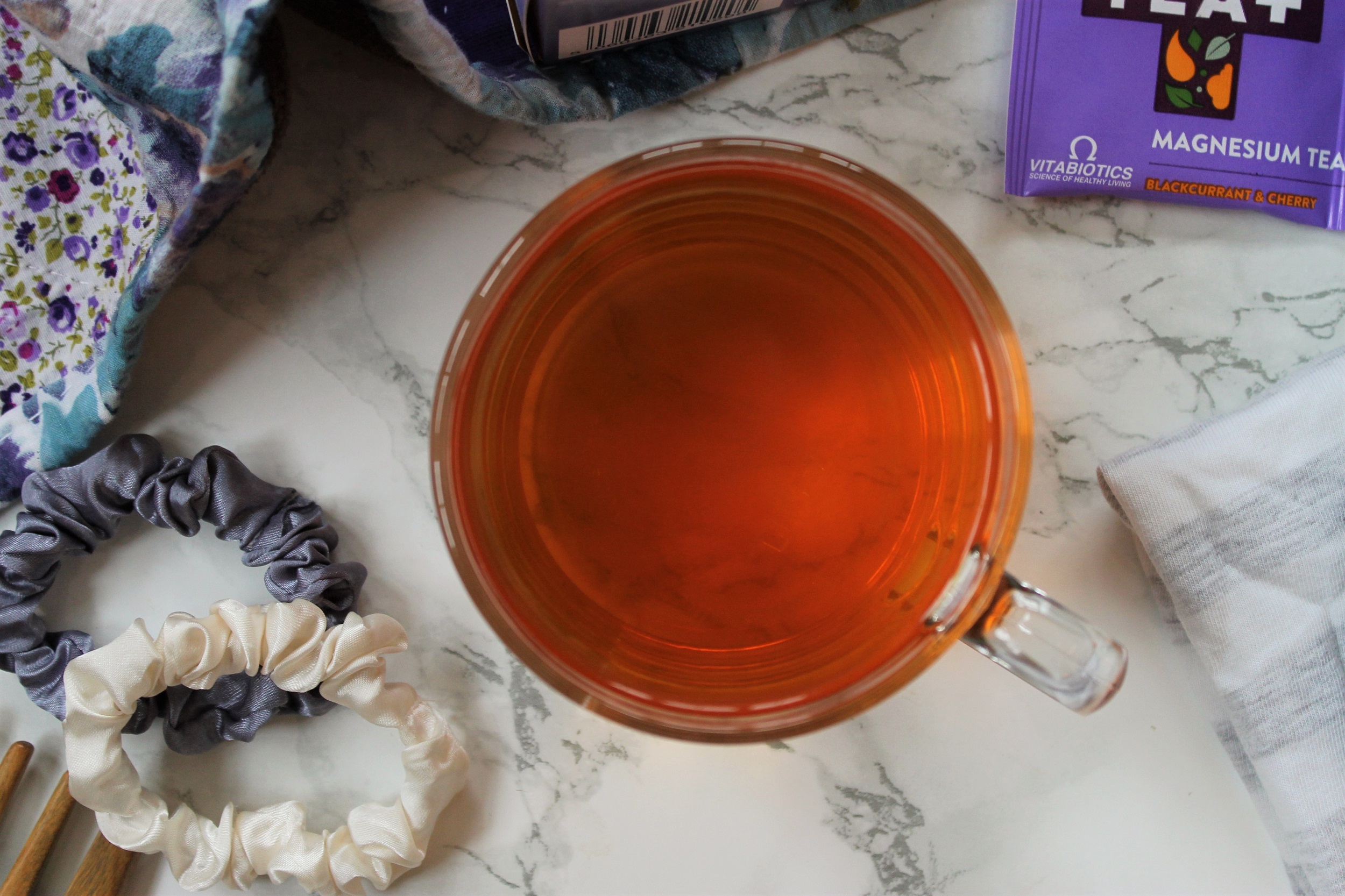 How to Brew Sleepy Tea by Tea Plus

To ensure that the magnesium infuses into the water, you need to brew this tea for at least 3 minutes. I stick to that 3-minute rule, using 100°C water in a 250ml mug. The resulting tea is quite light and mellow, so if you want a stronger flavour then by all means, brew for a full 5 minutes.

Adding a teaspoon of honey can be soothing and definitely goes well with the flavour profile of this tea, but don’t go overboard. A sugar rush late at night is not going to help you sleep.

Tea Plus sell this tea in boxes of 14 teabags, so you have a 2-week routine per box. If you only rarely have sleep troubles, then you can just brew a cup when needed – I still found it to be effective, even when not consumed regularly.

Why Tea Plus Sleep Tea?

I really like that this tea provides vitamins and minerals as well as traditional herbal remedies that can aid sleep. When brewed in 200ml of water, each teabag provides: 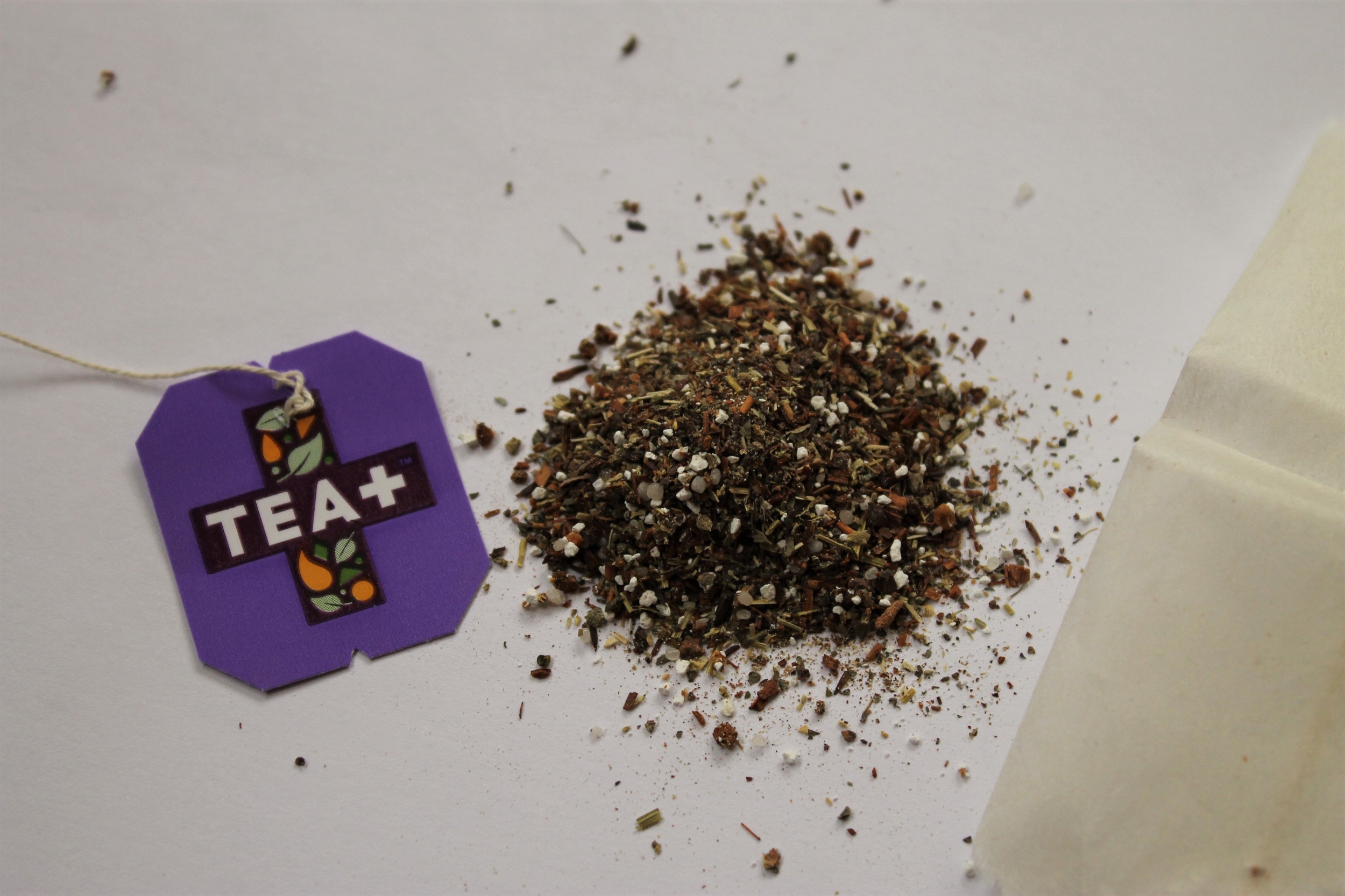 Magnesium is closely linked to sleep. Besides calming the nervous system and assisting overall organ function, it also stimulates GABA receptors and regulates melatonin (the hormone that controls your natural sleep/wake cycle). Healthline has a great summary of all the benefits and the scientific studies backing them up.

As for Tea+, they are a British company that creates botanical and health-focused tea blends with natural ingredients. You might even have seen the company on Dragon’s Den in 2018.

If you struggle with sleep or want to create a healthy sleep routine, then this is the perfect tea and I highly recommend you give it a try. I found it to be effective and the flavour is really nice too. Even if it doesn’t work for you, I can almost guarantee that you’ll end up brewing all the teabags anyway. It’s genuinely tasty!

You can buy it from Tea+’s official website using the button below or find it on Amazon UK using the link above.

Buy This Tea from Tea+ 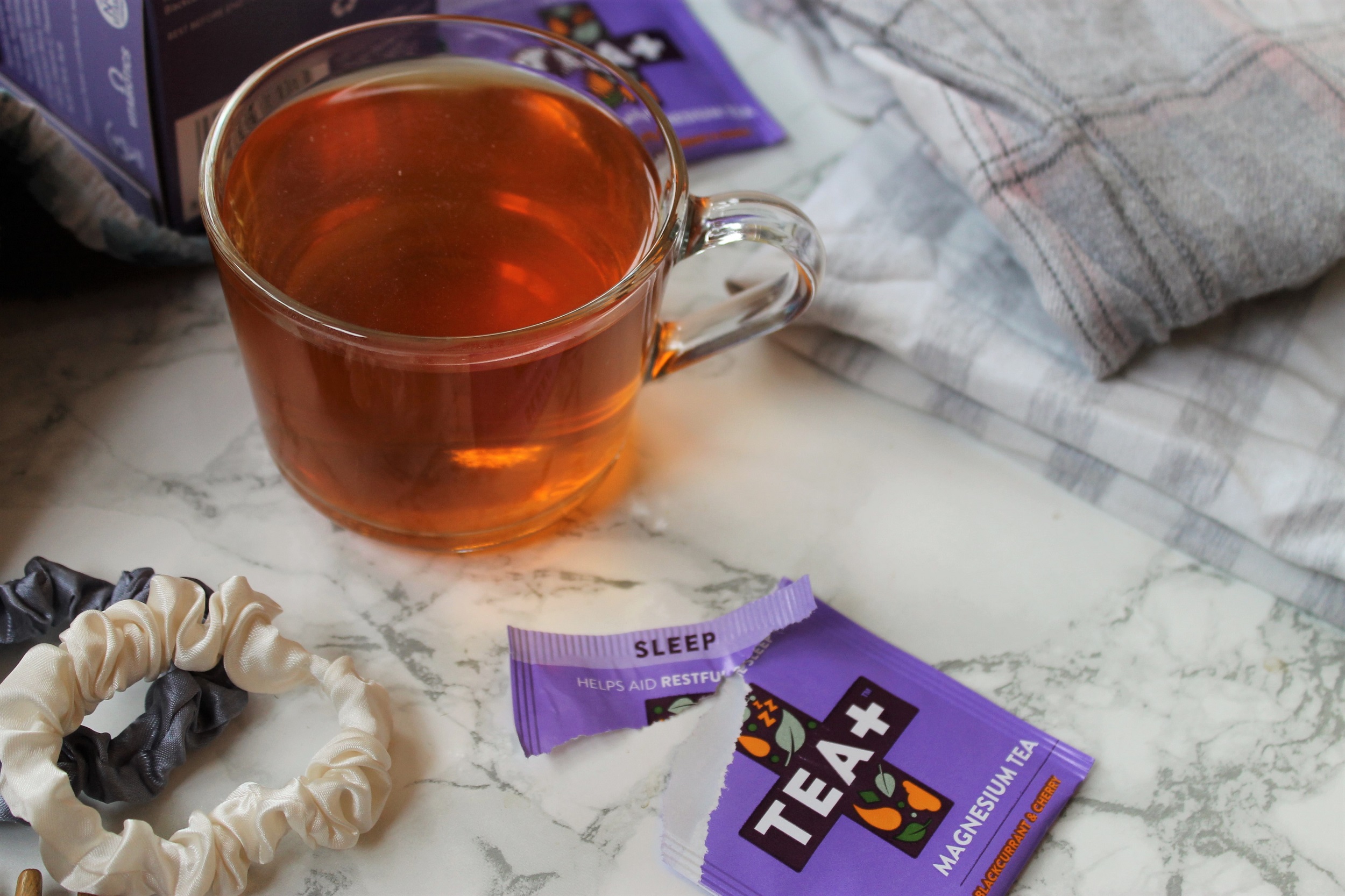 Chamomile is one of my go-to herbal teas when I need to relax. It’s great for anxiety as well as sleep. One of the best pure chamomile teas I’ve had the pleasure of trying was by Whittard of Chelsea. Read that full chamomile tea review next.