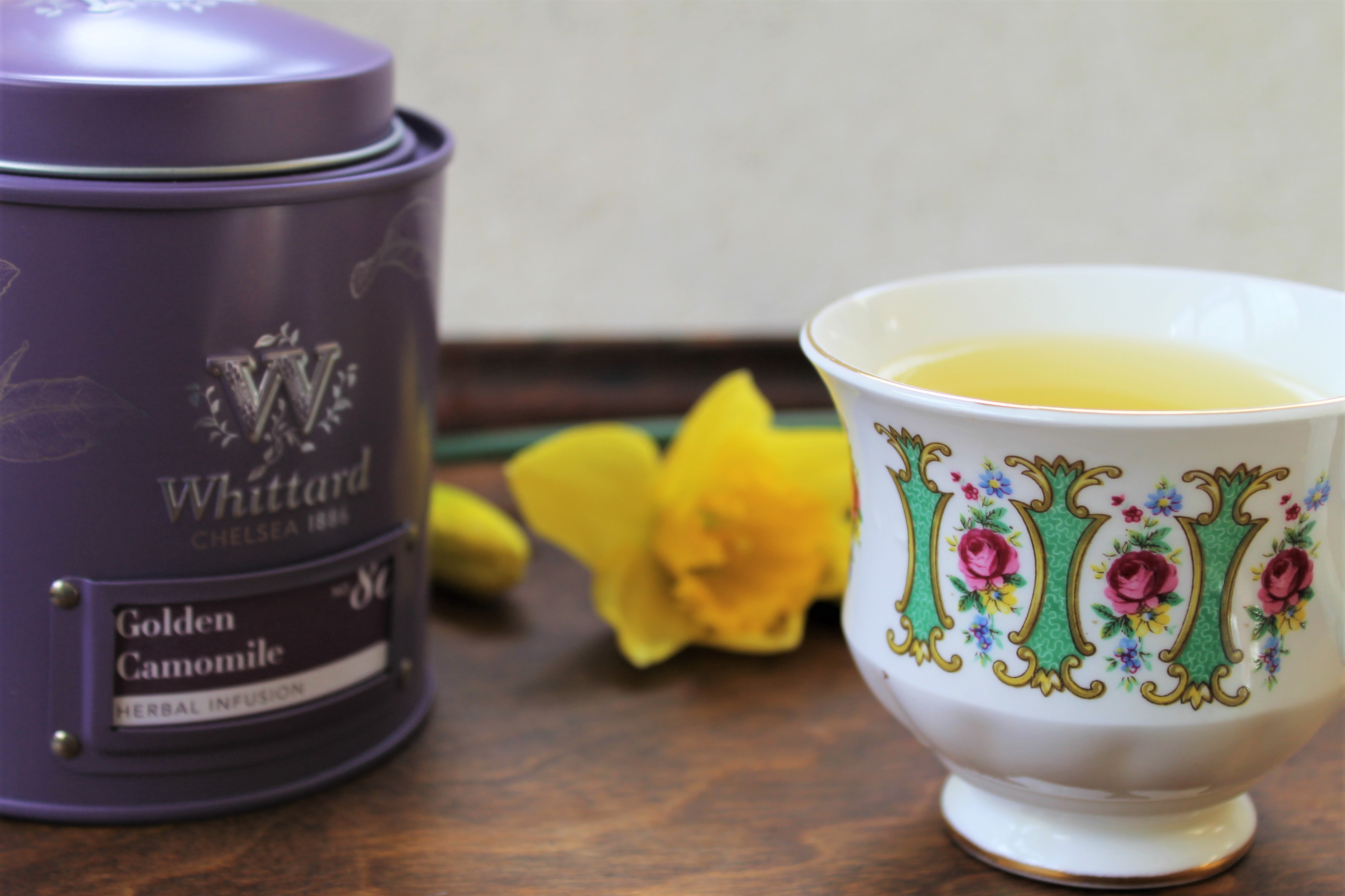 Reading this blog, you might imagine that my life is a breeze, with days spent drinking cups of tea under the sun. Unfortunately, just like everyone else, life catches up with me. Not every day is a good day.

My go-to tea when things get a bit too much is chamomile. The trick is to turn off everything (including your phone), get comfortable, and take a sip of this herbal brew.

On a side note, this herbal tea goes remarkably well with custard cream biscuits. Give it a try!

Whittard of Chelsea Chamomile Infusion at a Glance

A very soothing, calming tea that’s delicious in the evenings. I highly recommend trying it if you like mellow, sweet flavours. 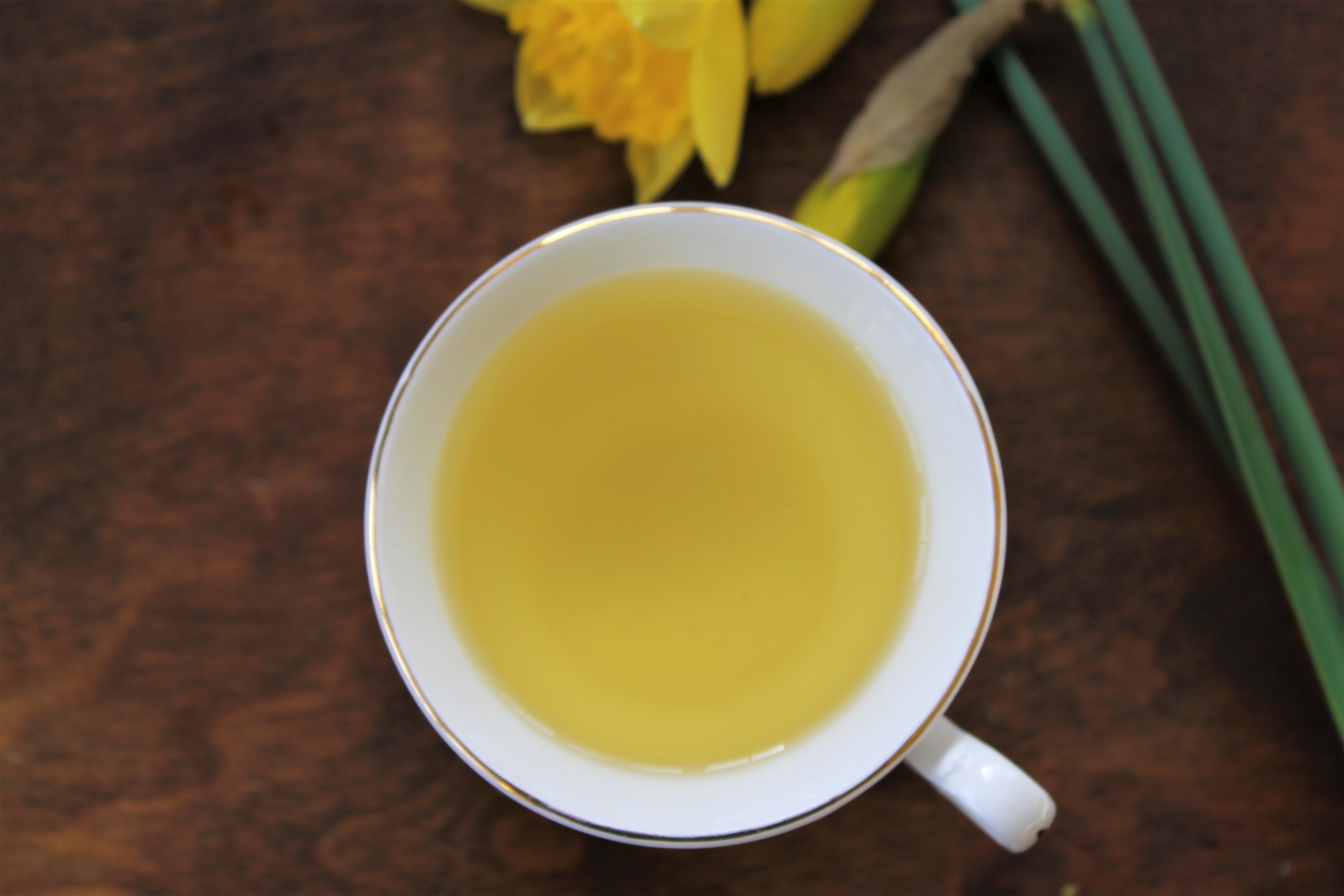 Opening the tea caddy, I get a wave of aroma. The chamomile flowers have a very fresh smell that I can only describe as fresh hay doused in honey. It’s naturally sweet and fragrant – but when dry, not overly floral.

I boil my water, pour into my cup and wait until it’s 75°C. Whittard recommend 80°C for all their herbal teas, but from my research I’ve found that 70°C is usually the best for chamomile infusions. I decided to go in between.

I brewed 1 heaped teaspoon of the Whittard chamomile flowers for 2 minutes and 30 seconds. At first the tea had a very bright, almost glowing, lemon yellow shade. The longer it brewed, the warmer it got until it was a beautiful gold.

The aroma of the brewed chamomile infusion is much sweeter than the dry flowers. There’s no hint of fresh hay, instead there’s a floral lightness coming through.

The first sip is sweet on my tongue. The flavour is mellow, honey-like, floral and slightly musty.

It reminds me of a beautiful meadow on a hot day. It makes me feel lazy and relaxed, as if I’m laying back on a blanket enjoying the hot sun, smelling the flowers, and watching the clouds float by. My eyes are starting to close already.

Tea That Helps You Sleep

The health benefits of drinking chamomile tea are varied, if you believe everything you read online. Everything from curing acne to soothing anxiety are listed – few health benefits are backed up by good scientific studies though.

Personally, I feel calm after drinking Whittard chamomile tea – whether that’s due to the delicious flavour that I stop and relax to enjoy, or some medicinal property, I’m unsure.

The first time I drank chamomile tea (Clippers, not Whittard chamomile) was in the early morning. I’d never drank it before and had no idea about the supposed medicinal properties, so any placebo effect is out of the equation. About 30 minutes after finishing the cup I felt extremely drowsy.

With that in mind, I definitely believe that chamomile has some kind of anti-anxiety, sleep inducing properties. I still drink it when I’m having trouble sleeping!

This is the first herbal tea from Whittard that I’ve tried, up until this point I’ve only enjoyed their classic blends and a few seasonal blends I’m gifted throughout the year.

As you can see in my picture and from the ingredients list, this tea is 100% chamomile. It’s literally just a tin full of dried flowers. 98% of those flowers are in good (not perfect) condition. Some are a little brown, either from the drying process or they were just too old and shouldn’t have been picked. They don’t seem to affect the flavour of the infusion, so I’m not too fussed.

Compared to Teapigs chamomile infusion, Whittard chamomile tea seems to be lacking petals. The individual Teapigs tea sachets protect the flowers in transit, so they look whole when it comes to brewing them. Most of Whittard’s chamomile flowers have lost their petals.

Regardless, it brews a delicious chamomile tisane (herbal tea) and I’m very happy with the end result.

Overall, I would highly recommend this tea. The mellow flavour of chamomile is so easy to drink, everyone I’ve met whose tried it has liked it!

I ordered the caddy (tin) of chamomile flowers, which is £11.50 for just 30g of flowers! That’s pretty expensive, but I was swayed by the fact that you can buy pouches of the tea to refill. At £6 per 30g, that puts the price per cup at around 40p. Certainly not a high-street price but not overly expensive either. Whittard of Chelsea is firmly in the middle of the market, offering a good quality tea for a moderate price.

Currently, Whittard sell this tea both on their website (they ship internationally) and on Amazon.

Buy This Tea from Whittard

When I’m not drinking tea and chilling out, I’m writing and writing and writing away. You can find all my tea reviews here on this blog: Twining’s Raspberry and Dragon Fruit is a good place to start. There’s also a growing number of travel articles, museum guides, video game reviews and more to read while you’re sipping away.

Not Sure About Chamomile?

Chamomile isn’t the only herbal tea that can help you get a good night’s sleep. Lavender, valerian and a range of anise-flavoured ingredients are all good sleeping aids. I write about these herbal ingredients (and how to brew them fresh) in my book, The English Tea Book. Subscribe for an email alert when it’s ready to buy!