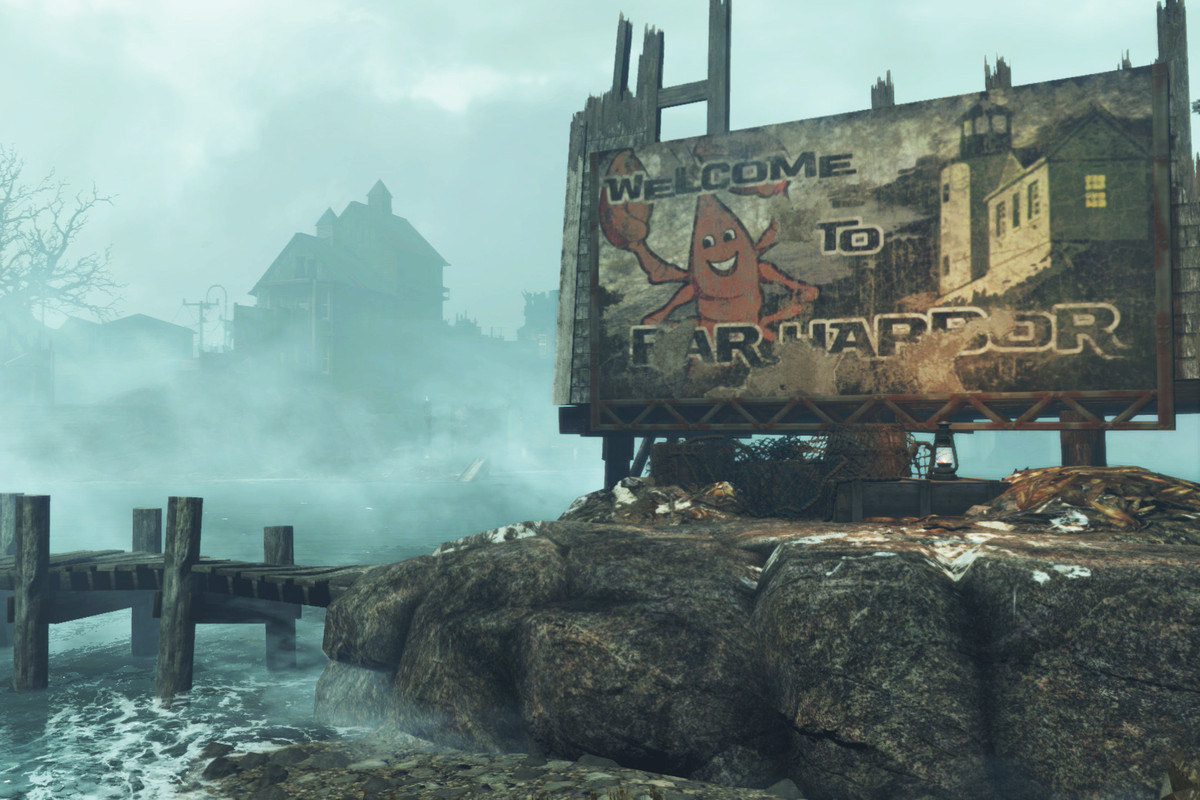 Fresh from completing Automatron and not wanting to delay a growing pile of games that I want to get round to, I downloaded Far Harbor, which is another DLC for Fallout 4. I am one of those gamers that likes to put a game to bed before moving on.

Far Harbor is an add on that comes with a lot of positive reviews, so going in I am quietly optimistic but without much of an idea about what is in the DLC except I am off to find a girl who has gone missing.

From here on out, SPOILERS.

I am yet to play Nuka World and will be playing it, but from the online Fallout 4 community, Far Harbor is the DLC worth having. Automatron felt like it was an afterthought (read more about that in my Automatron review), so my expectations of Far Harbor, a DLC that Bethesda claim is their largest ever, are hopeful for a more immersive experience.

Was it worthy of the hype? Kind of, but probably only because Automatron was so limited and I sense from Nuka World reviews (which are a mixed bag) that Nuka World may also be limited. Far Harbor has enough scope to be a standalone game and had it of not been related to the Fallout franchise it is easily long enough and varied enough to be a game in its own right. I have played many games shorter than Far Harbor.

I am not going to say it is entirely worthy of the hype though, because there are a few little things that the main game and Automatron did better.

Far Harbor near enough takes the main story of Fallout 4 and reimagines it onto a smaller, more intimate and more clear-cut setting. The end of Far Harbor is near enough a mirror of the main Fallout 4 game whereby you decide the fate of the island and the residents of Far Harbor.

The story telling is tighter in Far Harbor and the story is better as a result. It is more enjoyable more of the time which is great for people who like to get stuck into an adventure. I was half tempted to write my review when I was the good side of the mystery rather than out the other side of completion, but I decided that wouldn’t be a fair reflection.

Although Far Harbor does better at telling its story and is far more consistent than Fallout 4, I wasn’t as in awe of the world I found myself in and the story of Far Harbor doesn’t quite have the same intrigue or grip that Fallout 4 has in its early stages. It does however do a much better job of wrapping things up and allows a faction storyline if you’re that way inclined which again is all plus points.

Where Automatron was an afterthought with what I imagine developers to be brainstorming things that they should have included in the main game but forgot to, Far Harbor is more a game in its own right.

Comparing Automatron and Far Harbor is for the most part apples and pears, with Automatron really serving as a simple quest add on to allow players to create robots. In nearly every single aspect Far Harbor is a hundred times better, except it is too easy.

This really does grate on me, as Automatron although flawed was a challenge. Far Harbor was back to the comfortable walk in the park and there wasn’t much to do in terms of combat. You simply went on an adventure, travelling across Far Harbor to new locations and killing a few things along the way.

While this style of gameplay is excellent for exploration and storytelling, it would have been nice to have some intense battles here and there.

Far Harbor as an Open World

Far Harbor is a bit lost in what it is trying to achieve and I feel that a bit more care was needed when working on the game. First and foremost, the world is exactly as you would imagine a Fallout 4 world to be and there are no surprises really in the setting/design. But; the world was more rushed than the Commonwealth of Fallout 4.

Building designs and layouts were simpler and there were a few times along the way where things were inaccessible because of poor design and places where the player can get trapped and need to reload into the game to escape. Most notable of these were stairs leading to attics but beams being too low to go up them and fallen roof areas that lead to sealed (no doors exit) rooms that the player can’t then jump back up from.

Made all the more frustrating as in most cases there were collectibles like trunks or ammo boxes in those locations. When progressing through “dungeon” style areas and levels the whole rushed thing was even more apparent, gone are the long well thought out dungeons and instead you’re lucky to have three or four rooms. I am not sure if the development team were rushed to meet a deadline, but it feels that way.

Far Harbor suffers from a poor synopsis and the game is so much more than finding a missing girl. This should have been more carefully thought out and then their might have been more players that are keen to buy it. Instead, only around 4% of Fallout 4 gamers have completed Far Harbor according to my Xbox stats which is a real shame that 96 in every 100 Fallout 4 players are missing out on it.

There were a few plot devices that didn’t quite work with Far Harbor, I don’t think I would be the only one to say that by the second of five or so big quests that I already knew how I was going to sort out the island and which people needed to be taken care of.

The charm of Far Harbor and the interesting characters kept it going in spite of this and it is for this reason that the game feels more intimate than the main Fallout game. It is also for this reason that it is more enjoyable to take your time and explore it all thoroughly without feeling pushed to get to the “big conclusion”.

In this respect, both story-writing teams could learn a lot from each other and collaborate for Fallout 5 to strike the perfect balance. It is my understanding that Far Harbor was a first time for a promising director and as a first outing it is something to truly be proud of.

There are a few really cool parts to Far Harbor that are nods to pop culture etc. Like the drive-in theatre full of zombies (ghouls) or the Agatha Christie style robobrain murder side quest. These little creative flourishes were understated but fit in well to the DLC and made for a very fun aside to break up the main quest.

I am sure I will find a few more side quests (at least I hope I do) and I do like that about Fallout 4 in general that it genuinely rewards exploration and players that take that extra bit of time to talk to someone that is easy enough to miss and a whole avenue is opened up in gameplay.

Far Harbor is caped in fog when you first land on the island. It is dark, visibility is low and there is real menace when people start running to defend their pier from whatever lurks in the dark mist.

Then after that first mission the fog is nothing more than a plot point and gameplay wise it all but dissipates. The fog may as well be the mist you get when you spray window cleaner or a fragrance. It is not frightening or foreboding and the developers really missed a trick here because they could of substituted the lack of difficulty of the enemies with blind fear and panic.

Far Harbor is well worth every penny and will be a great add on that will keep you playing for at least 15 hours (if you rush). If you take your time, explore and savour the experience it will last much longer and is a great bit of DLC.

Much better than Automatron, just too easy and a bit too similar to Fallout 4’s main quest for my liking. But, most of us liked Fallout 4’s main quest so Far Harbor is a great way of playing with a different spin. It is also rewarding and there are some great bits of loot and treasure along the way. Well worth a download!