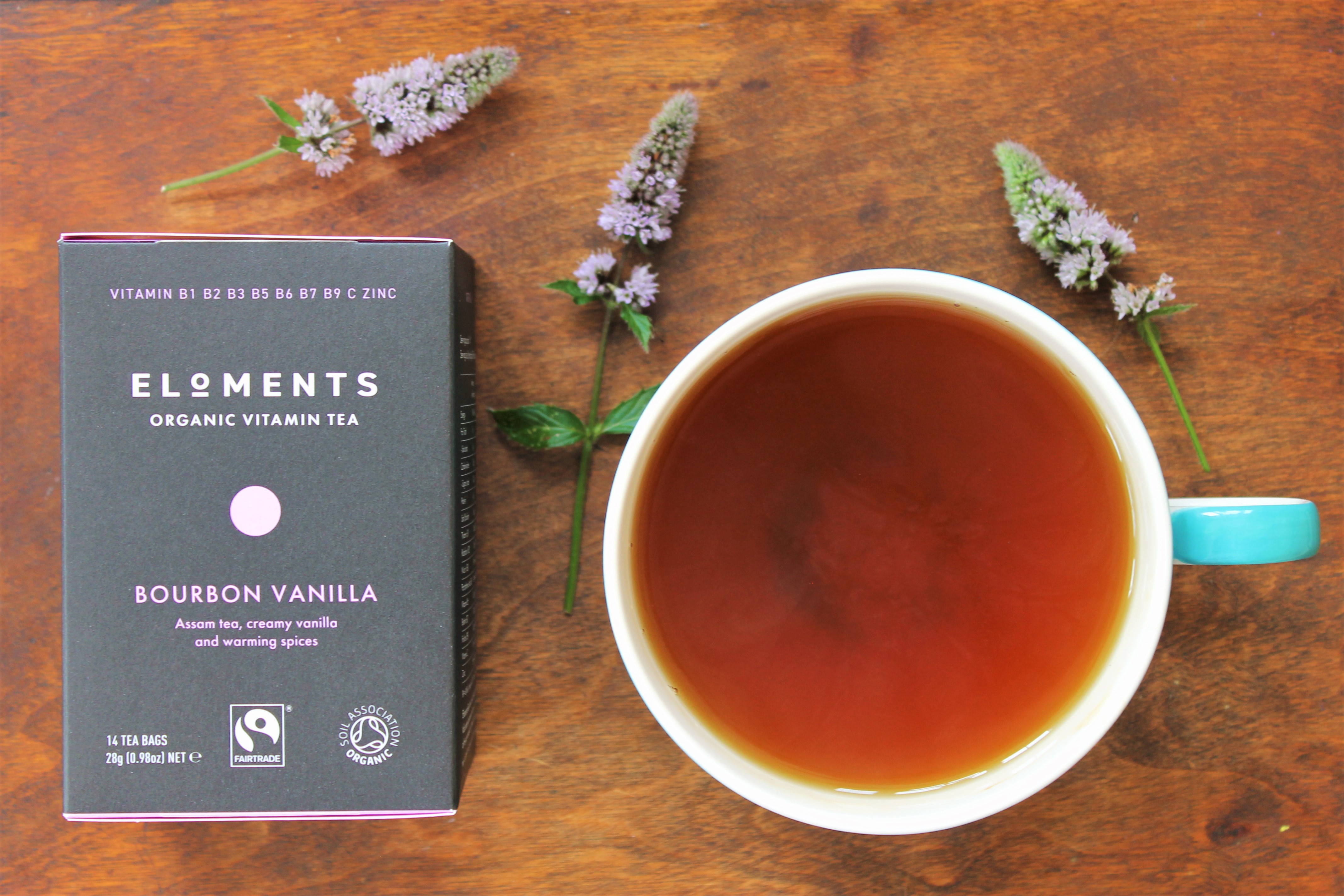 I stumbled across Eloments tea a while ago and was instantly hooked. A modern tea for a modern lifestyle from a modern women-owned company… but with classic tea flavours that I trust. This one instantly caught my eye when my samples from Eloments arrived (thank you Julie!) as the name alone had me salivating.

What makes Eloments stand out, besides the edgy matte black boxes, is the vitamins. One cup of Eloments Bourbon Vanilla tea contains over 40% of your daily intake of vitamin B1, B2, B3, B5, B7, B9, C and zinc. There’s more on that below, but first let’s delve into the tasting notes.

Find it on Amazon…

A very tasty tea. The bourbon and vanilla flavours are true but quite gentle. It’s not too rich or overpowering. You’ll find this very easy to drink. 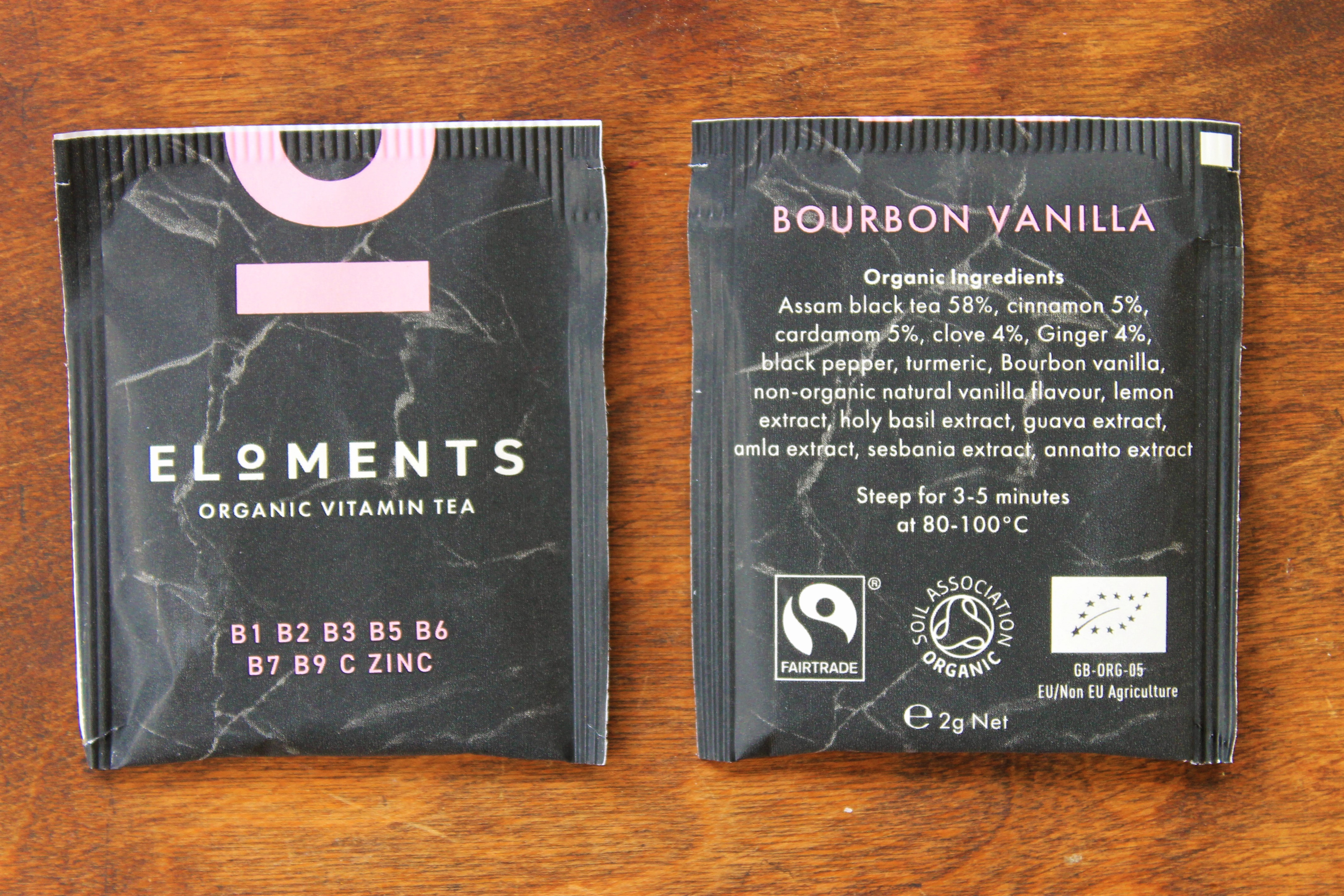 The initial aroma after I impatiently ripped open the single serve paper wrapper was instantly followed with a giant sneeze. It’s quite dusty in there! Once the dust settled, I got this nice chocolatey note (even though there’s no chocolate in it) and vanilla aroma. It’s sweet and pleasant but there’s an herby note coming through too. It’s not unpleasant but it wasn’t expected! First impressions are that this is an herbal chocolate and vanilla tea, rather than a malty Assam with vanilla and bourbon.

I gave the tea bag a good shake before brewing it nicely into a deep chocolatey brown. It’s cloudy rather than clear.

The wet aroma brings the black tea to the forefront. Malty Assam with vanilla notes. It’s musty and rich with chocolate hints settling into the background. If you’re not salivating by now, I must be explaining it wrong. It smells delicious.

The flavour builds slowly. The first sip is quite watery and herbaceous, but as it lingers on your tongue the malty Assam and vanilla sweetness pull through with notes of warm spices. Sip again and it gets better and better and better.

It’s very easy to drink, although nowhere near as rich and enticing as the aroma. It has a very light body with no richness or fullness that you’d expect from the ingredient list. The spicy hints are complex and well-balanced with the sweetness.

Overall, it was a big hit. It just wasn’t what I expected. By the time this review goes live I’ll have finished half the box.

How to Brew Vitamin Enriched Tea

I experimented with it in 3 ways:

Those last 2 were identical and tasted great. For small teacups, brew for 3 minutes. For mugs, brew for 4 minutes.

I see this as an after-lunch drink when I need something sweet to stop myself heading for the biscuit tin.

Putting aside the vitamins, Eloments are an exceptional tea brand. They use natural and organic produce wherever possible and have the hard-to-get Soil Association certification, which I wrote an article about recently.

74% of ingredients are Fairtrade certified. 100% of ingredients are natural and organic. The vitamins are from various extracts (lemon, holy basil, guava, amla, sesbania and annatto) rather than chemicals added to the tea. This is what gives it that herbaceous note. That’s the pay off.

It’s something I’ve noticed with many teas of this kind. Zest Tea, for example, adds extra caffeine to their tea. The pay off is a bitter note no matter how lightly you brew it. For Eloments, the extra vitamin pay off is an herby flavour.

You can’t avoid noticing it, but it kind of works? It doesn’t clash with the tea flavours, anyway. I liked it.

As mentioned earlier, this tea is really dusty.

When I think about vitamins and supplements, I always think of Sheldon from The Big Bang Theory reprimanding Penny for buying vitamins.

“Well, there’s some value to taking a multivitamin, but the human body can only absorb so much, what you’re buying here are the ingredients for very expensive urine.”

The real value to Eloments tea, in my opinion, is topping up on vitamins that you might be deficient in or not have enough of in your diet.

I really like the idea, especially for when I’m feeling too ill to eat solid food. Getting some extra vitamins is never a bad thing, even if your body doesn’t need it. Unlike Penny’s vitamins, this tea tastes so good and hydrates your body too. And let’s not forget about the natural health benefits of black tea.

I’d say this was a far better alternative to multivitamins.

The whole vitamin tea concept is really promising. Did you know that black tea interferes with how your body absorbs iron after a meal? My anaemic tea-loving friends are all too aware. The idea of a black tea that doesn’t interfere with iron intake or boosts iron levels to the point that it doesn’t matter, is something I’d be interested in, if Eloments ever went down that route.

Eloments explain the science on their website. It’s well worth a read.

It’s a good tea with a great idea behind it. 3 stars is one of the highest I’ve given for a tea bag. The flavour was easy to drink and the fact that the vitamins are natural, plus the organic and Fairtrade efforts made, have really impressed me.

The only room for improvements would be to somehow curb the herby note a little and offer a loose leaf version (I imagine that would help the natural Assam tea flavours pull through more). Check out Eloments Bourbon Vanilla tea for yourself!

Izzy’s Corner is a tea blog where any and all tea types are reviewed. Whatever I can get my hands on will end up on the blog! Subscribe for more Eloments tea reviews to come, or use my Tea Review Index to find other tea reviews to read.