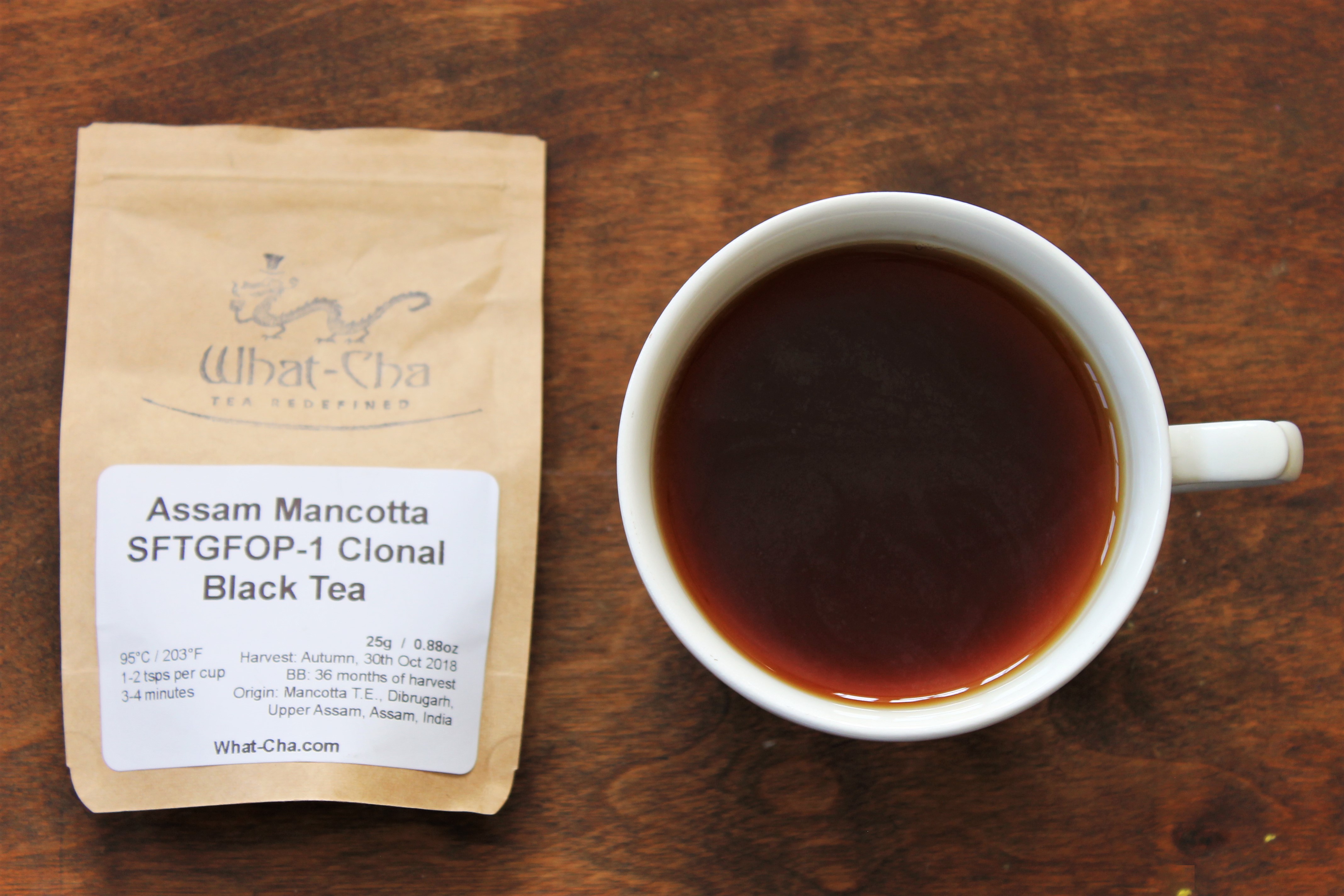 This is my first tea order from What-Cha, a UK based tea company that was highly recommended to me. I’d been searching for a better Assam tea after my mediocre Twinings Assam tea review. So, I ordered 3 Assam samples from What-Cha and this was the first I tried.

If you’re familiar with What-Cha, loose leaf Assam or premium loose-leaf teas, head straight down to my tasting notes. If, like me, you’re at the beginning of your tea journey, there are a few things you should know:

I am going to try my best to give this tea the justice it deserves in this tea review.

This is a beautiful Assam, lighter and more complex than I’m used to. The bready and fruity notes are subtle at first but last well into the aftertaste. Even if you aren’t keen on rich black teas, I’d still recommend trying this one as it’s relatively light, sweet and pleasant. 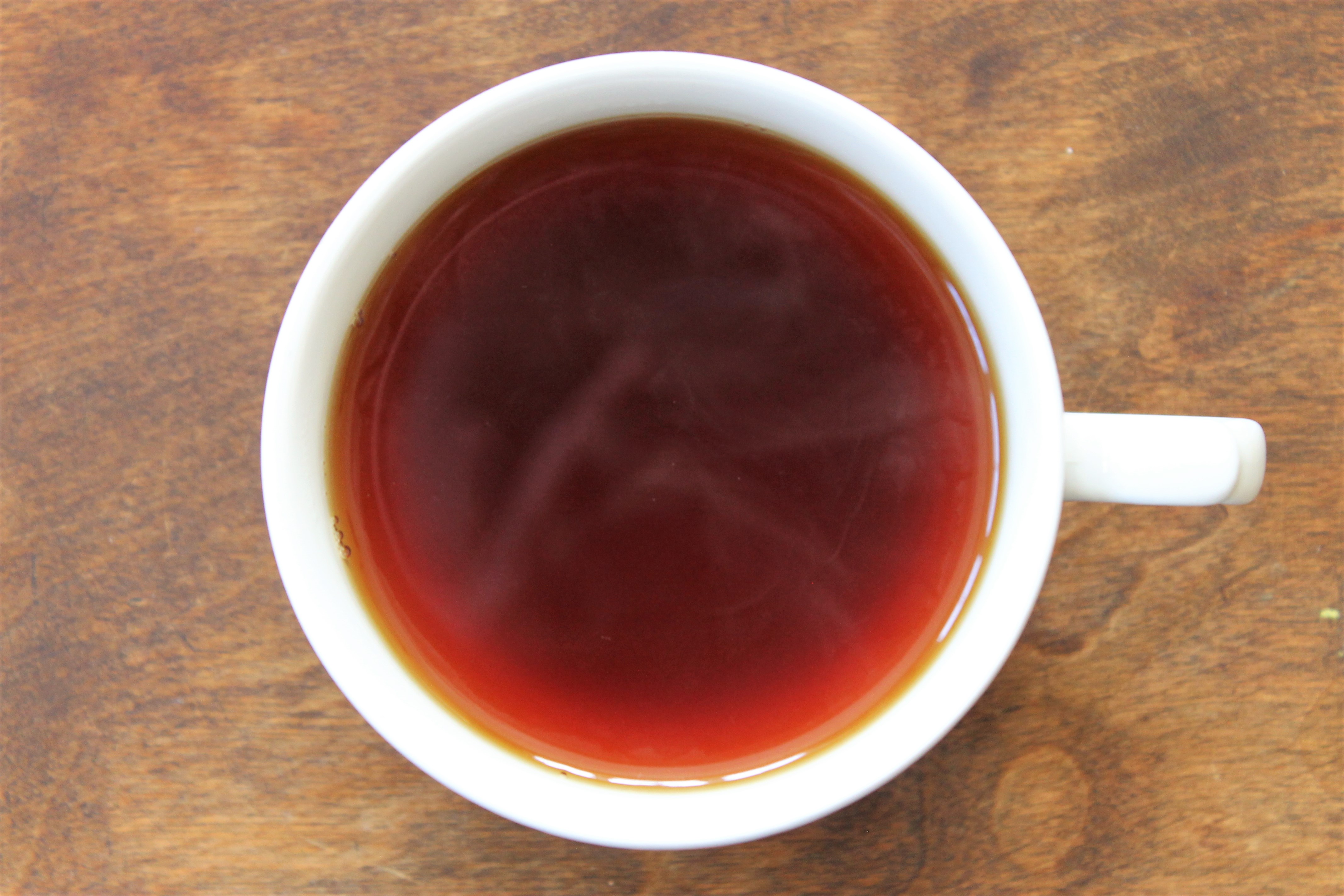 This tea smells so great, very fresh. Actually, I’d even describe it as refreshing which I usually reserve for describing green teas. Dry, the leaves have a light malty aroma that’s bright and warm. They’re tiny golden curls, much smaller than I was expecting.

Once brewed, the tea liquor colour is a dark red velvet shade with an orange/brown tint. It’s rich, red and dark. The wet aroma is sweeter and richer, with more complexity from the maltiness.

That first cup is delicious. It’s sweet but not sickly sweet, rich but not too much. It’s warming and filling with a smooth body that just glides over my palate. First, I’m getting the classic Assam maltiness but with a sweet bready flavour (like a hot cross bun). As I swallow and the tea moves over my tongue, there’s an undeniable raspberry jam flavour. It sounds a little unusual but stick with me here.

With each sip the sweetness develops a little and becomes fruity like a sultana and the raspberry jam note grows in the aftertaste.

The second cup from my tea pot is richer still, losing some of the lightness but still smooth and sweet with bready jam notes. Cup 3 and suddenly bitterness has crept into the flavour – adding a drop of milk saves it.

How to Brew Loose Leaf Assam

I let it brew for 4 minutes and 30 seconds so the first cup would be rich and with fully developed flavours. The first time I drank this tea I only let it brew for 3 minutes – it was very light, sweet and slightly malty but none of the complexity of bread and jam notes were present.

If you’re anything like me, you’re having a hard time being generous with a tea that costs more than you’re used to. But let me share a lesson I learnt here. Being frugal with this high-quality tea because you don’t want to waste it… is actually going to waste it more. Too little leaf and you won’t get the full flavour profile. Don’t waste the tea by using small teaspoons and drinking sub-par cups, it’s better to use a good amount of leaf and enjoy the flavours well… even if that means you won’t get as many cups out of it.

And you can use the same leaves twice with this tea. The second steep is lighter but still nice. The third steep isn’t worth it.

I ordered a 25g sample which arrived in an air-tight resealable packet, with a hand-signed note and 2 free tea samples. Above and beyond what I was expecting. You can also see on the website that What-Cha source it directly from the tea estate and 25%+ of the price goes back to the farmer.

The quality of this Assam tea speaks for itself and that clearly translates into the flavour. There’s not much to say here, it’s just a good tea with no faults that I can pick at.

I’ll be ordering from What-Cha again, for sure.

Overall, I seriously enjoyed this tea. Cup after cup, even when I got the brew time wrong and it was too light or too bitter, it was so easy to drink. The raspberry jam flavour is surprising but so good. A fantastic first experience with loose leaf Assam from What-Cha!

I’m not a pro at this, I’m just passionate. My love for Assam tea is deep rooted but even with this bias I don’t think anyone could deny that this was an excellent tea. Make sure you check out the rest of my blog for more tea reviews like this.

Taylors of Harrogate Sweet Rhubarb Tea Review (an herbal alternative if you want sweet, fruity and autumnal without the caffeine)