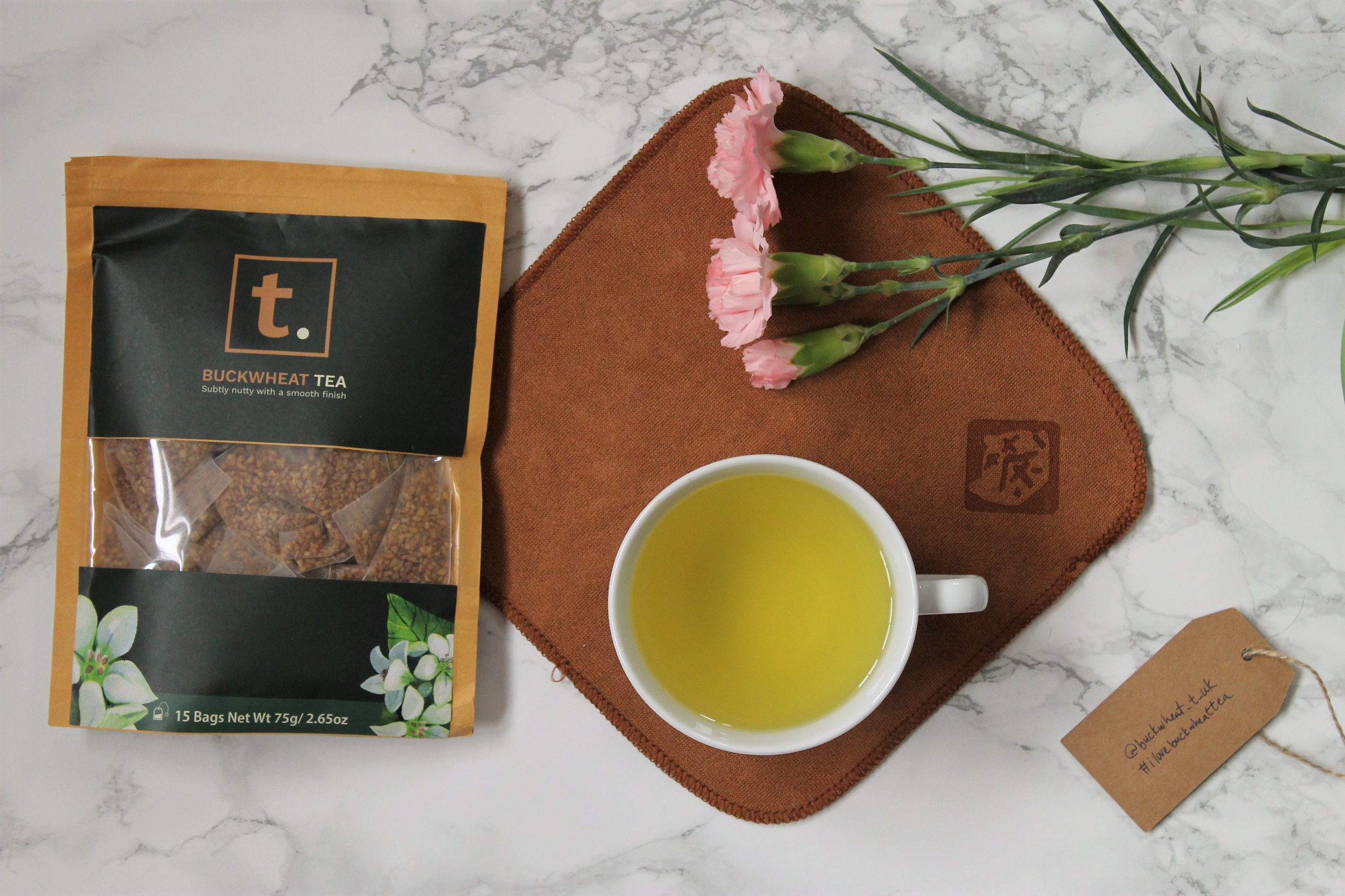 Buckwheat tea is completely new to me, but I’m so eager to jump right in thanks to t.! This new brand has sent me a generous package of their 100% natural and plant-based buckwheat tea.

Tea made from grains is less common in the West, but pretty popular in several Asian countries. You may have heard of genmaicha, which is a Japanese blend of green tea and toasted rice kernels (delicious) but other rice, barley, and grain-based teas do exist in numerous other countries.

Find out what buckwheat tea is all about in my review below, including what it tastes like, how to brew it, and where to buy it.

t. Buckwheat Tea at a Glance

This is a unique and delicious tea that I’m so glad I tried. The aroma is as rich as caramel and the flavour is a smooth as butter. It’s so delicious and I urge you to try it! 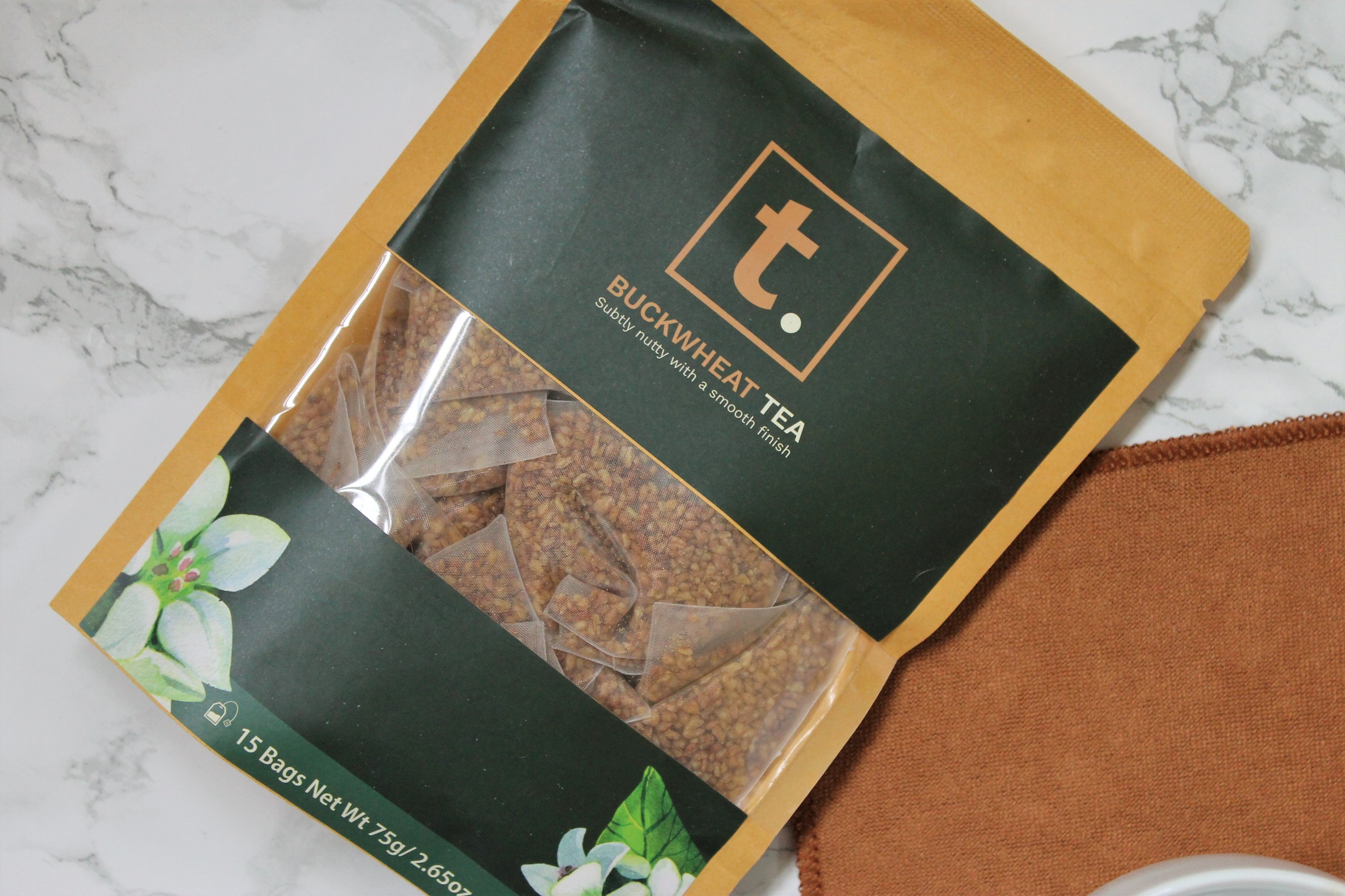 The buckwheat tea is packaged in a resealable pouch, for freshness, and the second you open it up you are hit with the most enticing aroma. Yes, it does smell of wheat, but it’s more complex than that. It’s bready and moist, like cinnamon rolls, with a gooey sweetness that reminds me of toffee or Cadbury’s caramel. Yum!

It brews into a bright daffodil yellow tea colour – very clear and smooth.

I love the aroma of the brewed tea even more. It’s like toast or cookies with notes of roasted grains – if you eat bulgur wheat regularly, you’ll find it very similar.

As for the flavour, it’s deceptively subtle after such a powerful aroma. Toasted corn kernels create a mellow and toasty flavour with warming nutty tones throughout. It’s incredibly nice and very soothing. 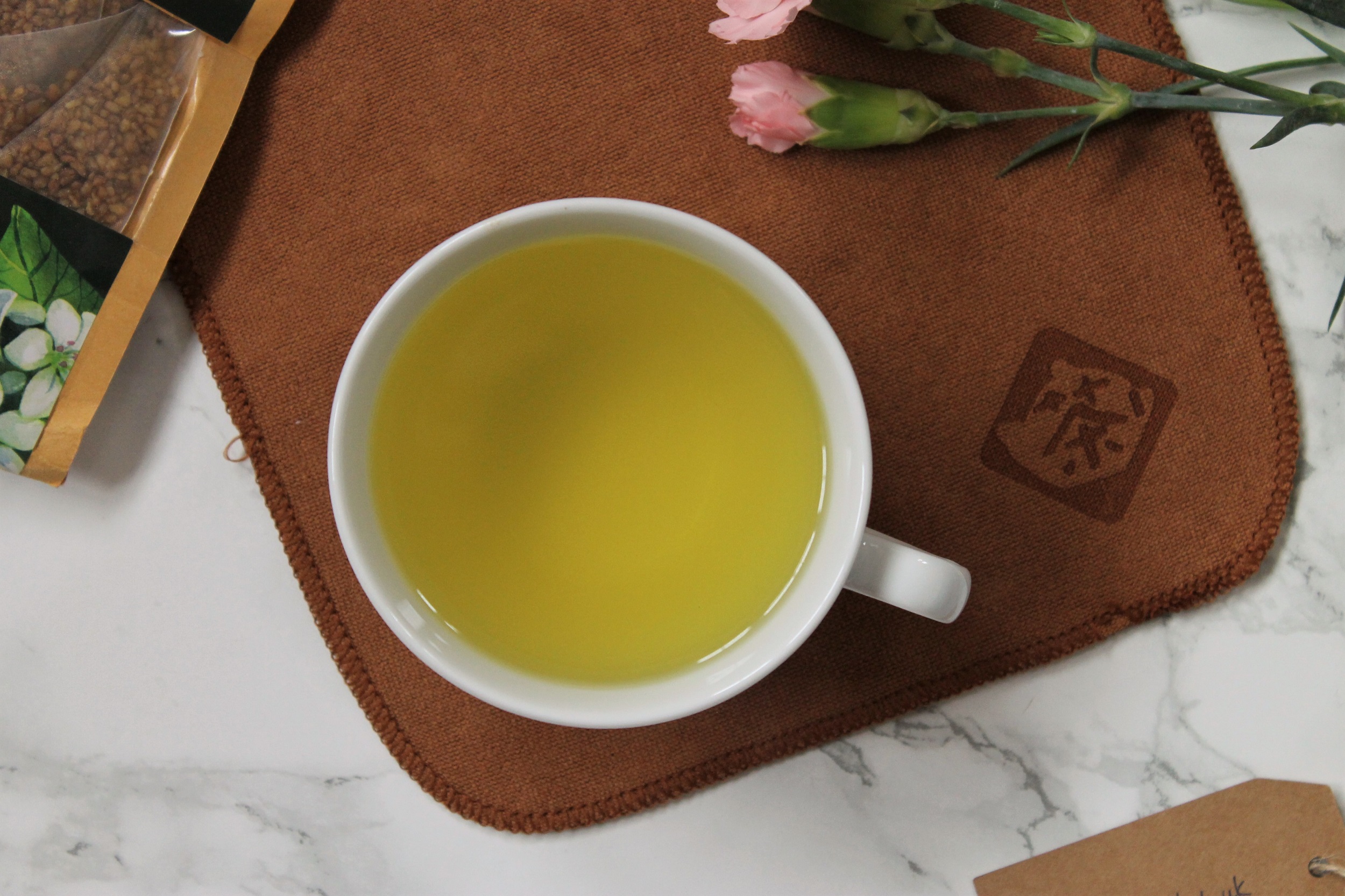 How to Brew Buckwheat Tea

There is no complex method to brewing buckwheat tea, it’s very similar to most herbal teas available, just with a short brewing time.

Pop a single 5g pyramid into a mug, pour over freshly boiled water from the kettle, and let it steep for 2-3 minutes. I used 250ml of water and a 3-minute steep to get a good strength tea. I would certainly recommend brewing it for longer if you like your tea strong.

t. recommend reusing each tea sachet up to 3 times and suggest trying it iced as well as hot. I’m not sure if the warm and nutty flavours would work well iced, but you never know. Coffee tastes great iced, after all.

I found this tea to already be sweet enough, so don’t add any honey or sugar until you taste that first sip.

t. approached me on Instagram about reviewing this tea, and I gladly obliged. Their tea is gluten-free, naturally caffeine-free, anti-inflammatory, high in antioxidants and vitamins, and comes with some health benefits including improving digestion.

I can’t vouch for the digestion benefits, but I can confirm that it is very calming. A cup of this tea in the evenings really settles my mind and I highly recommend taking small sips while you read a good book. Perfect for unwinding. 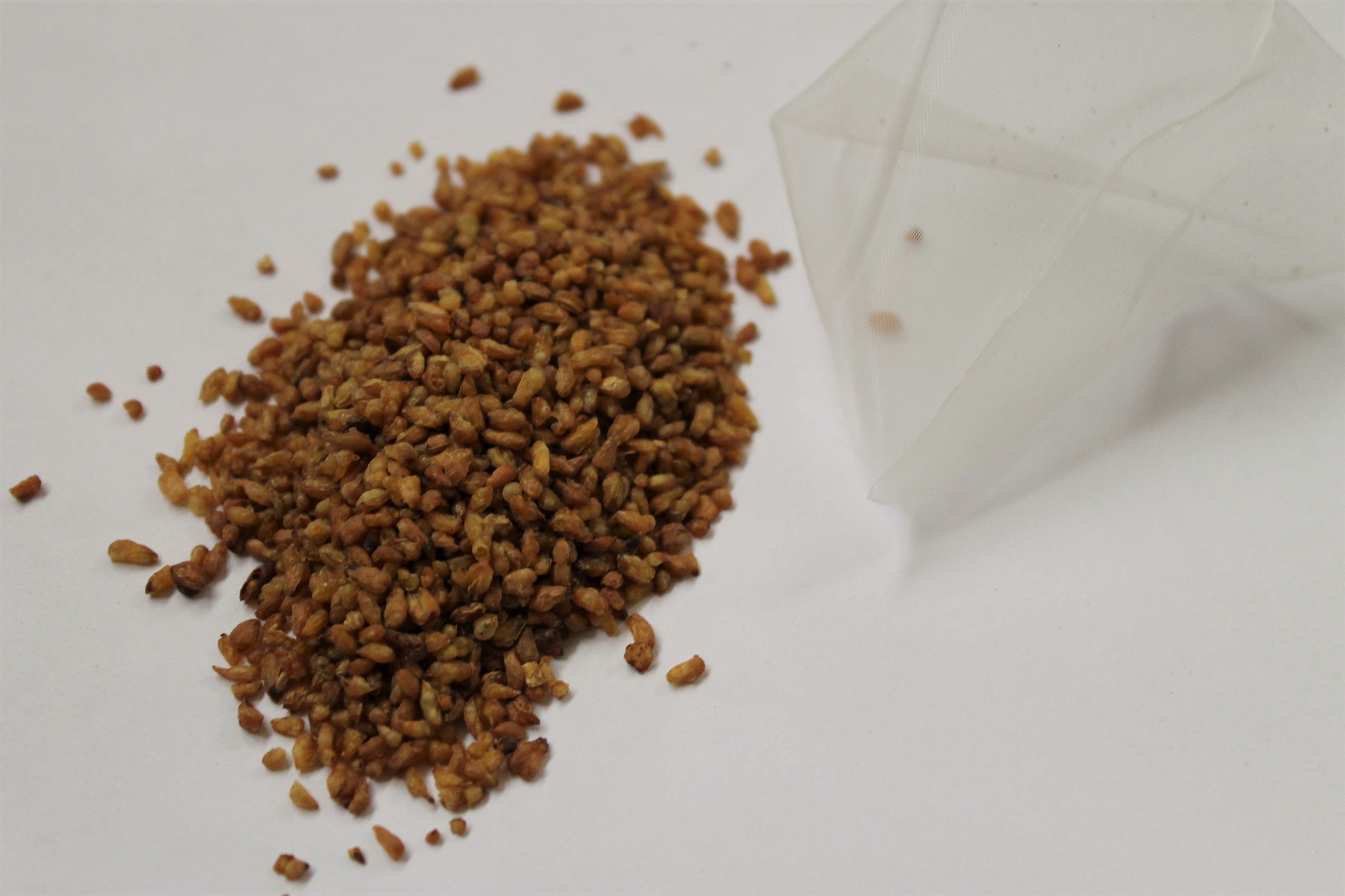 The quality of the tea looks great – you can see that it’s made from 100% roasted buckwheat kernels that are left whole inside the pyramid sachet.

Lovina, the owner of the brand, grew up drinking sobacha (buckwheat tea) in Japan and wants to introduce us to this wonderful and powerful tea. You can learn more about Lovina and her journey.

I highly recommend trying this tea. The flavour and aroma are superb. You’ll also be supporting a London-based mum of two and doing wonders for your health. At the time of writing, the best and only place to buy this buckwheat tea is from the t. official website (link below).

Buy This Tea from t. 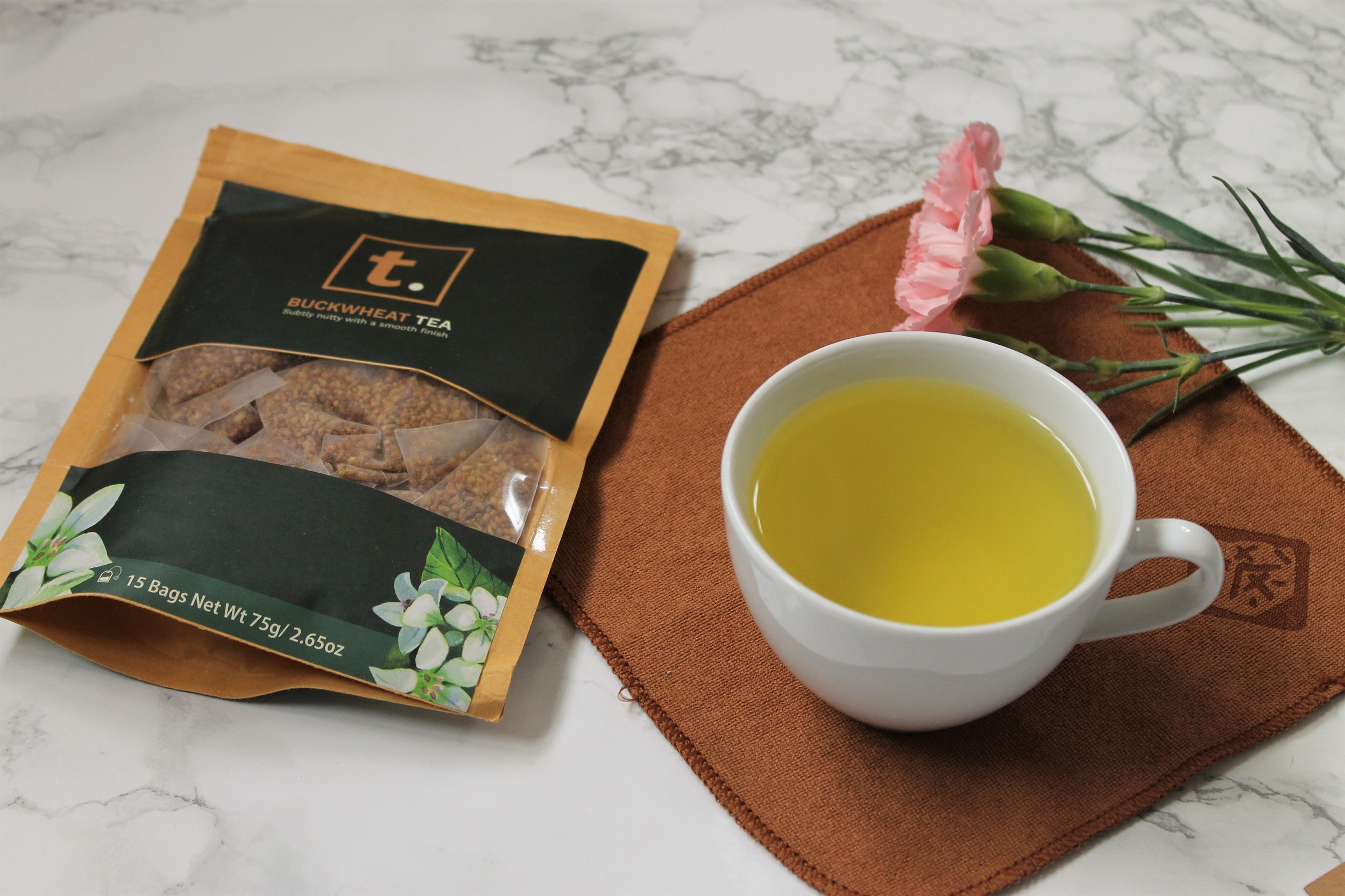 I can already tell that this is going to be a staple in the summertime, but if you like a caffeinated tea during the day then it doesn’t quite hit the spot. Read my review of Ahmad Tea Peach and Passionfruit next, for a fruity black tea that’s wonderful hot or iced.