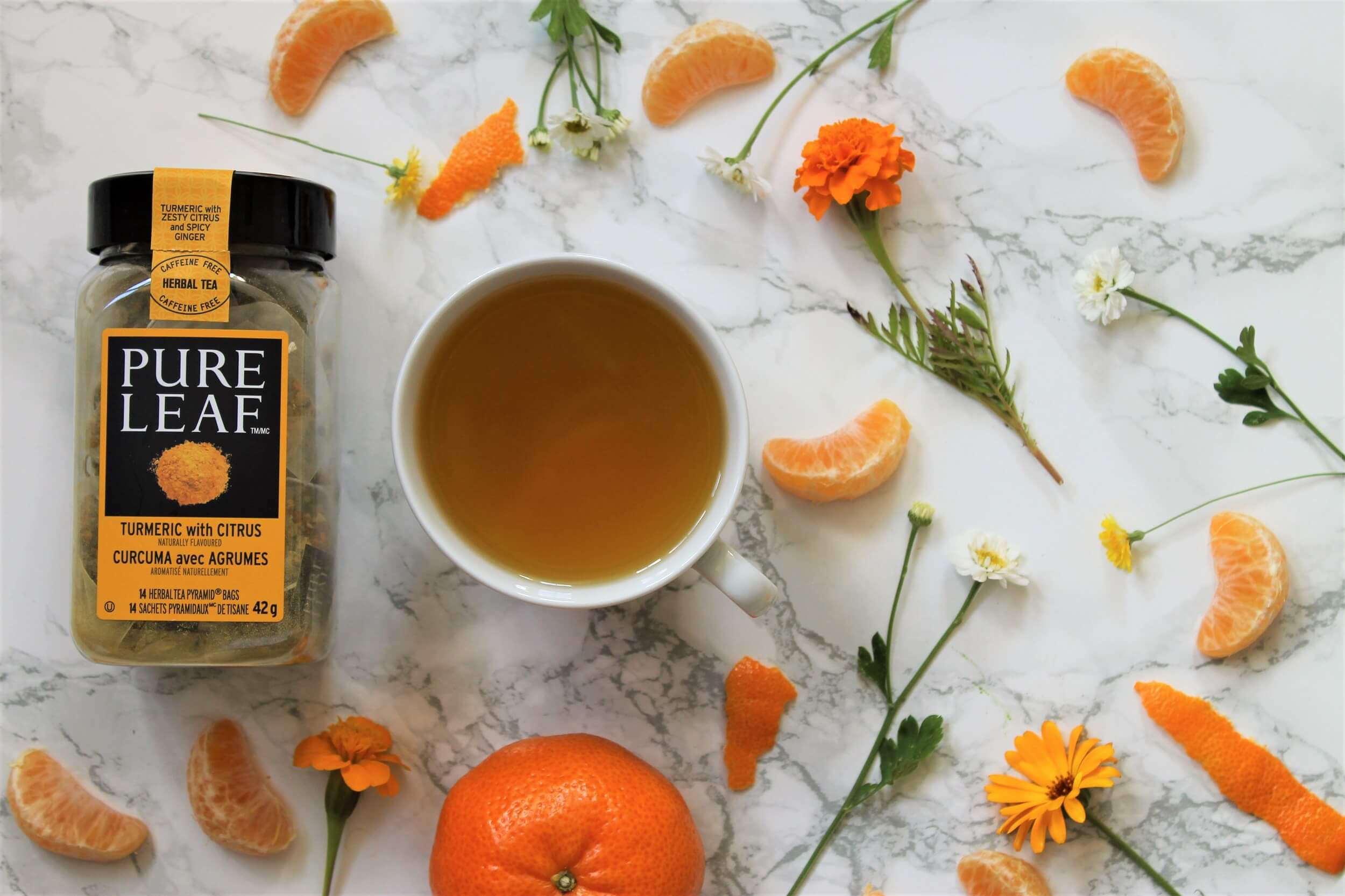 My love for turmeric is slowly growing. First, I loved just a dash in homemade paella, then I discovered I could make Bombay aloo myself with a medley of turmeric and spices. But turmeric in drinks is my newest fascination.

This tea by Pure Leaf is primarily available in Canada, so if you get your hands on it in the US or UK, consider yourself lucky!

Here’s my full review, including tasting notes and some tips on how best to brew it. Turmeric tea has some great health benefits too, so I’ve outlined those below as well. Enjoy!

A nice way to enjoy the flavour of turmeric with gentle spices and orange zest notes. Don’t hesitate to add some extra orange juice or peel, as I felt this tea was missing something. The turmeric overtook everything. 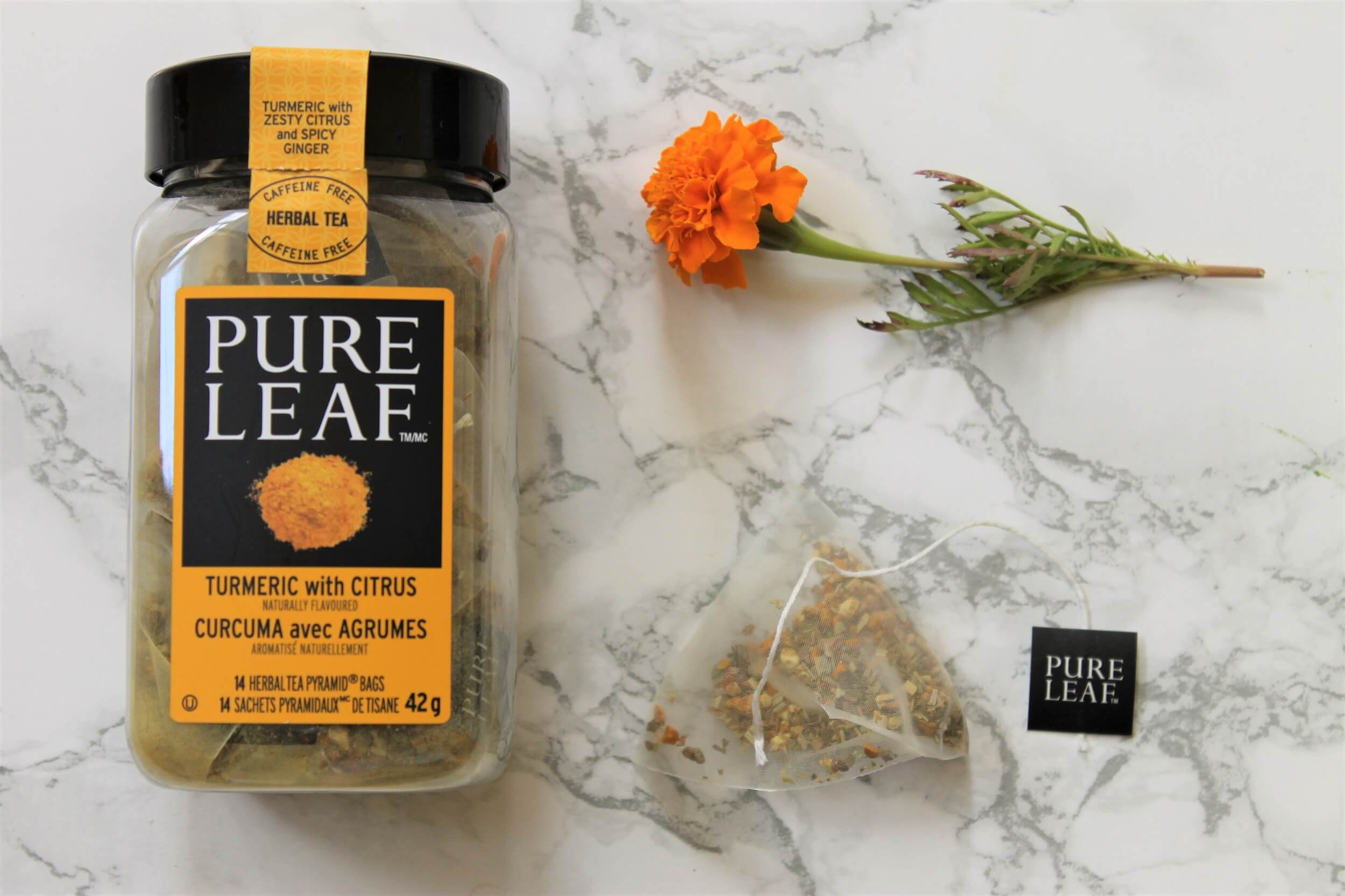 That woody, earthy, and slightly musty aroma of turmeric powder instantly permeates the room when you open the jar of tea sachets. A good sign for freshness! It’s slightly more complex than simple turmeric powder from the spice cupboard – there’s a note of ginger spice to it.

It brews into a murky yet bright clementine colour. The turmeric “clumps” in the tea sachet tend to dissolve a bit, so you really can’t avoid a little turmeric dust collecting in the bottom of your cup.

The ginger spice enhances once brewed, giving it some delicious autumn vibes. The flavour is woody and musty with dominant notes of turmeric and ginger. It’s spicy, but not too fiery. I would describe it as warming rather than hot. 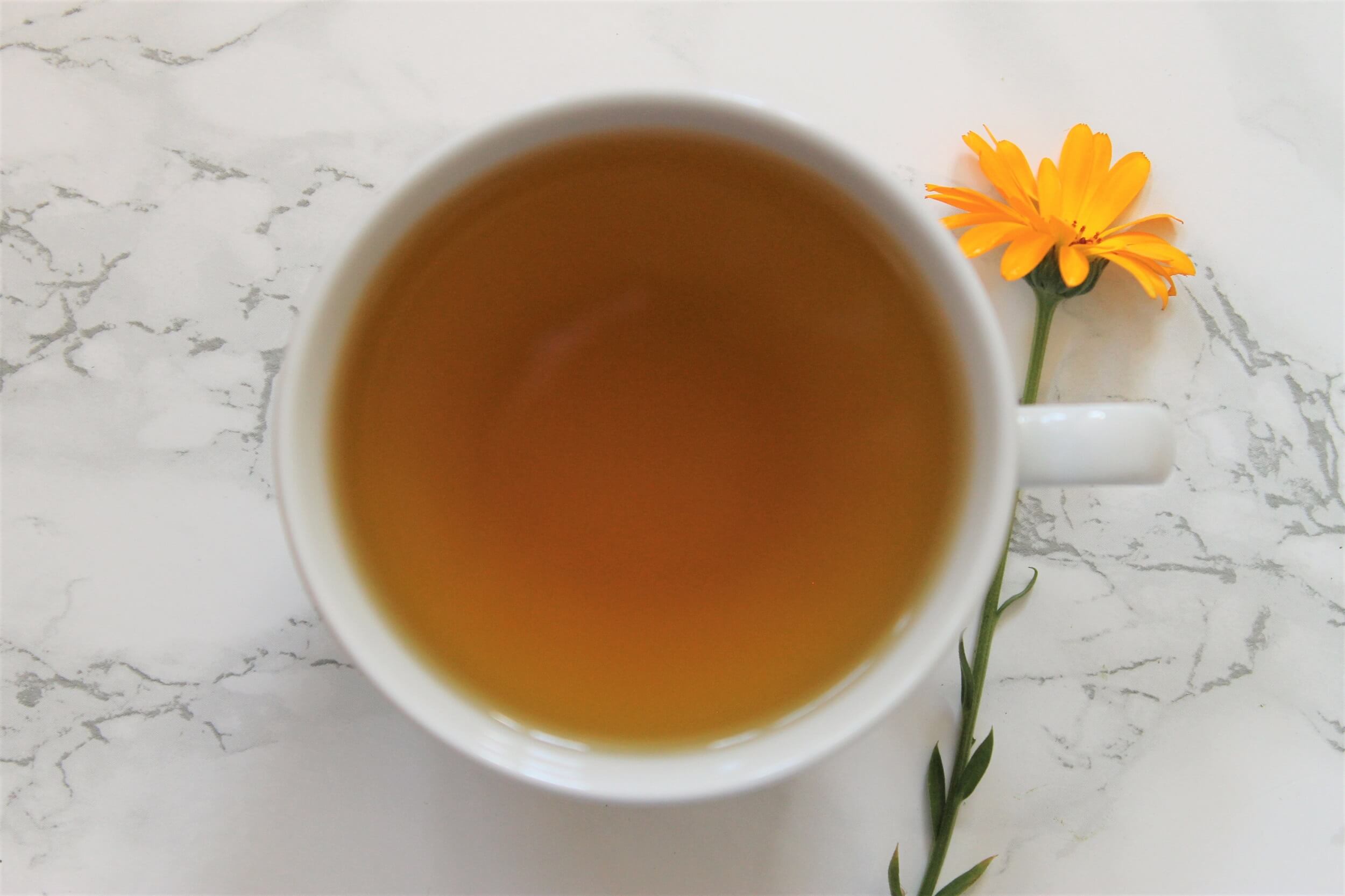 How to Brew Turmeric Tea

I brewed for 4 minutes in 100°C water. It’s a herbal tea so don’t worry about using slightly cooler water like you would with green tea. The ginger isn’t overly strong so don’t hesitate to brew for longer than 4 minutes if you prefer a bold cuppa.

As for what to drink it with, I find it too distinctly flavoured to have with food. Perhaps a ginger nut biscuit? Or ginger snaps. Yum.

Drink at any time of day – there’s no caffeine to keep you up at night.

I like the quality of Pure Leaf tea – you can usually see the separate ingredients within the tea sachet. It’s just nice to know what you’re brewing, compared to the very dusty and finely chopped contents of some herbal tea bags. 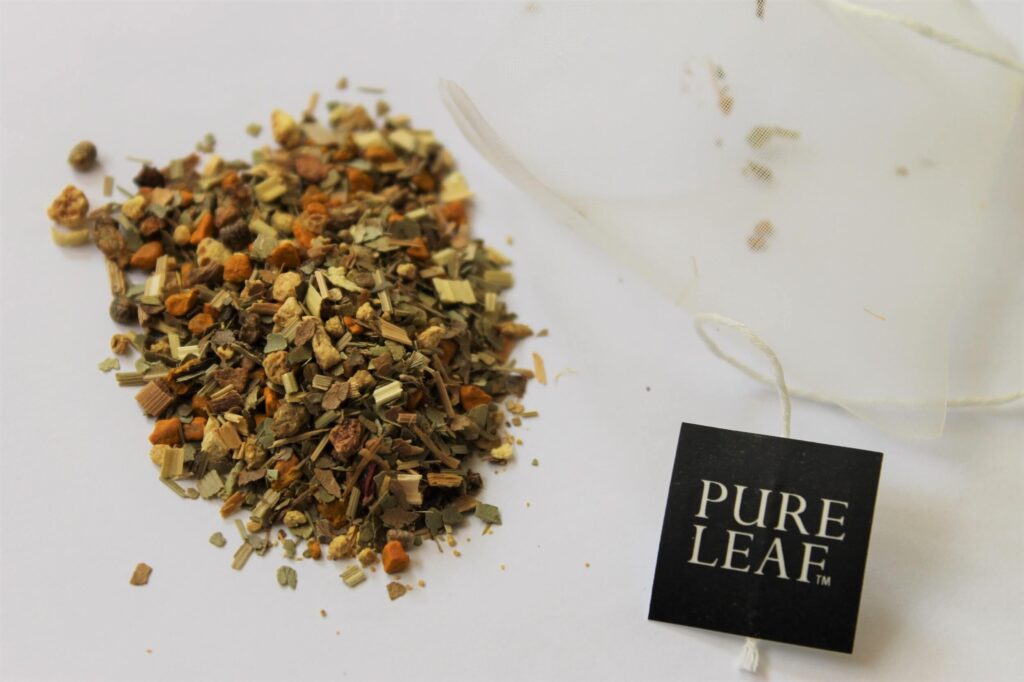 Despite the plastic jar (boo, plastic) I’m pretty happy with the natural ingredients and eco-friendly efforts of Pure Leaf. The flavouring added to this tea blend is natural flavouring, rather than artificial.

The key benefit of turmeric is its anti-inflammatory properties. With a single cup of tea, you’re unlikely to “cure” any ailments, but regularly consuming it could make a difference to health problems such as:

There’s also evidence that antioxidants from turmeric can counteract carcinogens and have anti-cancer effects.

Just remember to take this with a pinch of salt. Your cup of Pure Leaf Turmeric Citrus tea isn’t going to turn you into a superhero.

Overall, this is a very pleasant tea. I enjoyed drinking it for my review and I’ll definitely finish the jar of Pure Leaf Turmeric Citrus tea rather than gifting it away. You can search Pure Leaf teas on Amazon using the button below to see if you’re lucky enough to have it available in your country. 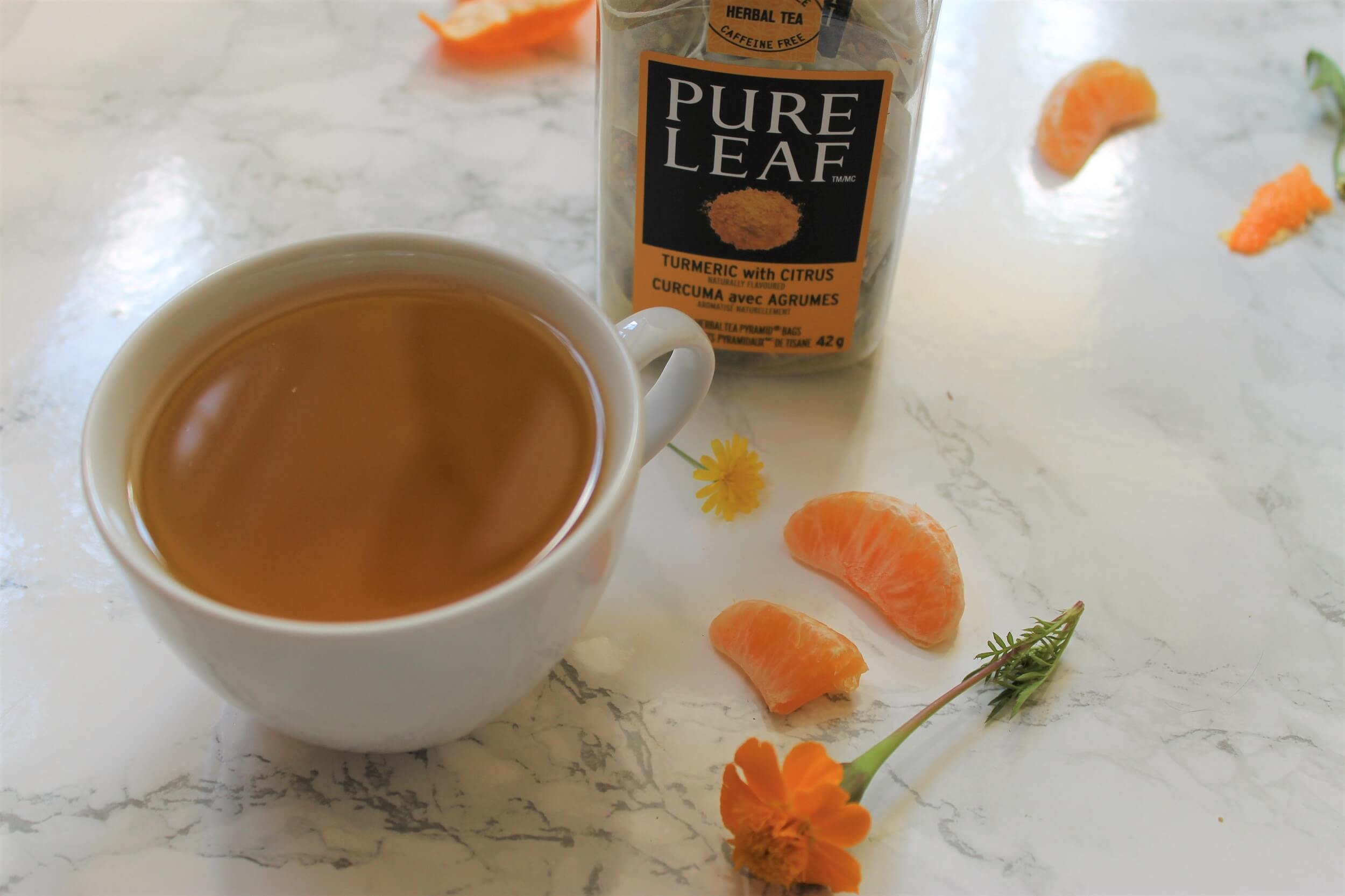 The one thing I felt was missing from this tea was some extra orange zest to play up the citrus aspect of the blend. So it seems fitting that I recommend an orangey tea for you to try next! Read my review of Twinings St Clements for a classic and sweet orange tea.