I reviewed Life is Strange One on here so if you want to check out my thoughts on the first in the series have a look. Also, the Subtext also did a Life is Strange: Before the Storm review which he loved so check out what he had to say about that in his video.

Now, onto the tough second act.

Whenever a game has break out success, actually scrap that, whenever anything has a high level of success, it often becomes an impossible act to follow on. I remember the Eminem lyric that went along the lines of “let’s stop with the fables, I not going to able to top my name is..” – but Eminem sang that lyric on his follow up album to his first successful album. And like the Marshall Mathers LP, Life is Strange Two has done something that is ultra rare, it has surpassed its successful predecessor.

I realise a lot of gamers have an affinity to Max and Chloe but hear me out before hunting me down with pitchforks.

Life is Strange Two is a Different Animal

We often hear that when reading or watching reviews, but it is so true of Life is Strange Two. Where one had a charm and almost innocence about it that was reminiscent of a by gone time in our lives; Life is Strange Two is a lot more serious, a lot more grown up and I suspect, hits much closer to home.

Life is Strange enchanted us, allowing us to view adolescence through rose tinted glasses and when Max and Chloe were lingering in moments watching the world pass by and trying to understand their place in it, we felt that, because we have all been in those quiet moments, whether in our minds or in the real world. But, crucially, Life is Strange placed us in a removed world where ultimately our decisions weren’t taken seriously. After all, how many of us saved Chloe only to allow a mass genocide in Arcadia Bay?

It was whimsical and although it made us feel something, Life is Strange didn’t teach us anything.

Life is Strange Two doesn’t play the choices for effect. Each choice, each careful deliberation has a long-lasting effect. I reached an ending that largely hinged on what seemed like an innocuous decision in act one… but it wasn’t. Life is Strange really taught us that each decision has consequences.

The Characters of Life is Strange Two

I will be the first to admit that Sean and Daniel aren’t instantly as memorable as Max and Chloe. Often this is because early on in the game the player is forced into picking lots of best of bad choices. Choices that force us down the telling of the story but don’t really allow us to sympathise with the characters.

In other words, because we are forced into making choices that are dumb by any stretch of the imagination it is hard for us (intelligent players (ego)) to feel an affinity with a character that is just making dumb choices. It took me a while to bond with Sean (well into the second or third act) and unlike Chloe, Daniel is constantly put in an adversarial role and it is only through Sean that we can even remotely like Daniel. In the final moments of the game (no spoilers) I finally found my love for Daniel, realising how vulnerable he truly was.

Sean though, man, I love Sean much more than Max and Chloe combined. That burden that he carried and how in the final moments it all came to one decision… something resonated with me about Sean that Max and Chloe don’t even scratch the surface of.

Is Sean as memorable as Max or Chloe? Nope. Is he more human, broken and ultimately endearing than Max and Chloe – yes, in a heartbeat. 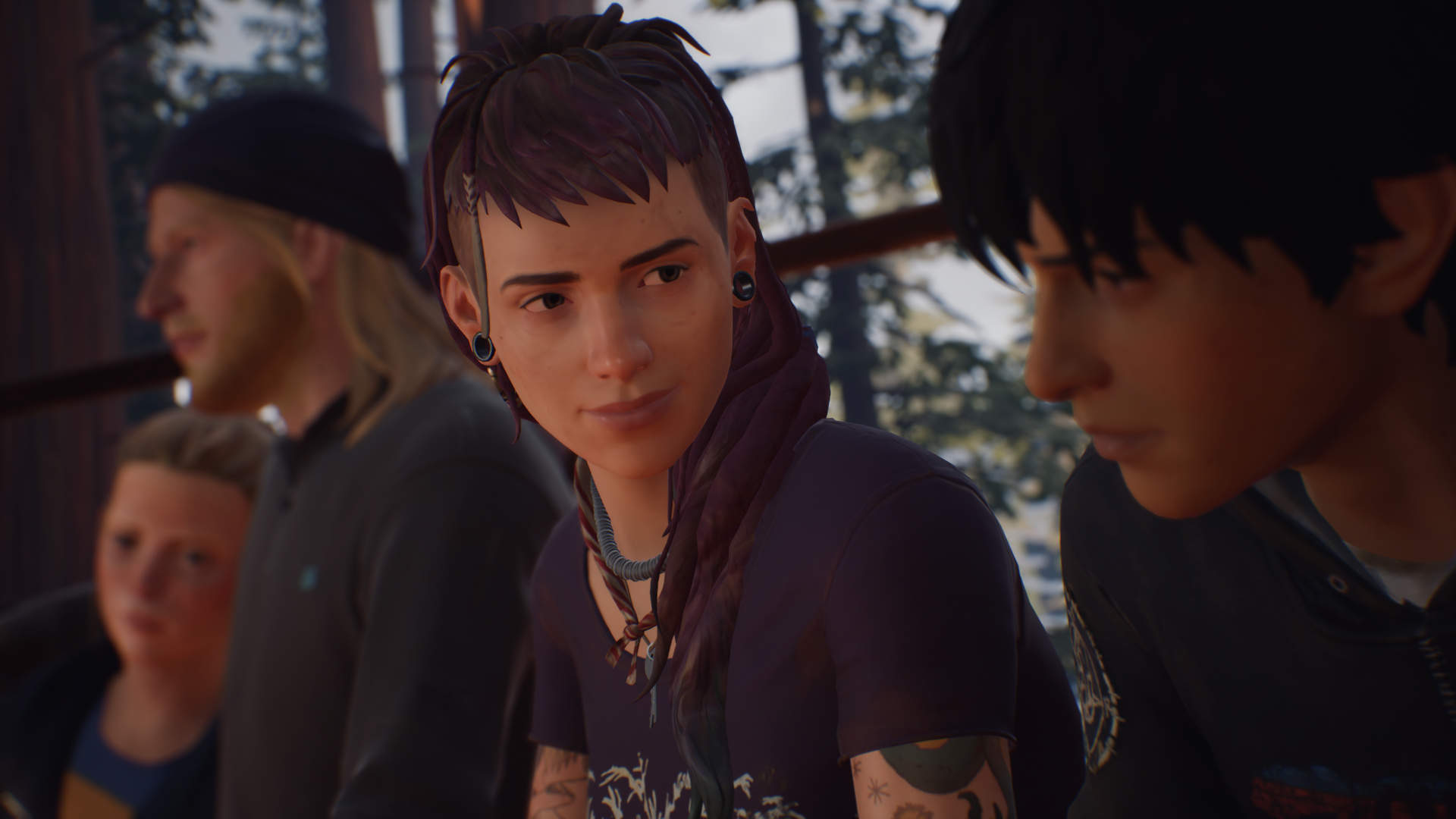 The first thing that Life is Strange 2 got wrong I touched upon earlier. For Life is Strange 2 to work, the player must relinquish control and accept that the story wouldn’t actually make sense in the real world. And after all, the game is based on a character having a “superpower”, but we often get so wrapped up in the game that we forget it is fiction. There are points in the game where you will be thinking – “this would never happen in real life” forgetting completely that it is a story with other much harder to believe things going on.

That is a testament to how well the story is told overall, but when the illusion is broken every now and then by silly things not making sense, you do suspect that they could have tidied up the narrative a bit better.

Secondly, the graphics are, like the first game, a bit hit and miss. Sometimes you feel immersed while others it looks very cartoony. I understand that the series has its own style, but that style can be represented through a high-quality graphics system. Not one that drops in and out and at times looks as poor as bad last gen console games.

The gameplay is basic in Life is Strange 2, and aside from a couple of difficult to find items it really isn’t much of a challenge. This is mainly because the game itself wants to facilitate the journey of the story, but there could be better use of the actual gaming aspect. It could be either more challenging or it could have more things to do while in control of the characters that has an overall effect on the game. Largely the game centres around object interactions, which can be boring for the millionth time picking up or examining another useless object.

On the subject of objects, games that let the players read into an object’s significance are much better than games where the character narrates some memory and tells you about an object. An example of this would be where Sean looks at a photo and says something along the lines of; “I remember this, dad did this and Daniel did this”. I mean great, but you have taken an object that could be poignant to some players and made it ordinary by over explaining it – let the players place importance on an object.

The last thing I really disliked about Life is Strange 2 is that it fell into the same trap as the first game, the story was only going to end in a finite amount of ways, but you knew that there were things the developers weren’t going to do so you could make choices without being concerned about a worst case scenario. For example, anything life threatening to either main character in act 1,2,3 or 4 was always going to have the safety net of not actually killing the player. Life is Strange need to either build in a feature whereby players can die by bad choices or not bother putting in faux perilous situations altogether because they lose any meaning if they can’t harm the player.

There are a few not so positive reviews about Life is Strange 2. This is in part because the developers allowed players more freedom and the amount of endings went from a binary choice (Kill Chloe or Arcadia Bay) to players having one of, I think, seven possible outcomes depending on how the player has played throughout the game that culminates in that final choice for the second game.

This freedom comes at a price as some players will ultimately make the easy decisions, especially if they truly grasp the moral question the game is actually asking. I don’t want to really go much further into the ending I got or how I got it, but, I will say I put Daniel’s ultimate wellbeing at the heart of choice.

It was a fucking hard choice to make as well. I sat on that decision screen knowing which button I wanted with all my heart to push but knew that the other option was the one that probably held the best outcome for Daniel, at whatever other cost. Gone was the save Chloe or Arcadia Bay question that had you primed to pick one outcome because let’s face it the first game steered us that way – and in its place was a monster of a question – do you pick freedom or redemption?

As the end unfolded and I watched in horror and joy at just how much my choice had impacted the lives of my characters I couldn’t help but feel overwhelmed with emotion that hit me like a ton of bricks. I have watched countless videos of gamers playing that end moment and there are always different reactions depending on the choice and outcome. One thing most had in common, it was not a quick decision and most people spent a while debating which to pick.

For those that picked my ending, there were tears, there was joy, there was a human connection that you don’t often get with games. I say don’t often, I mean there are maybe two or three that I can think of where the game actually taps into who you are as a person.

When all is said and done, how you play Life is Strange 2 is going to alter how you feel about it. But, if you want a game that is confident in what it is trying to achieve, isn’t afraid to challenge your moral compass and actually teaches you something about yourself, then Life is Strange 2 is the game for you. It isn’t as quaint as the original, but frankly I am glad, Life is Strange 2 has taken all it did well in the first game, built on it and grown up along the way.

Life is Strange 2 is the best game I have played all year which if you look through the reviews of games I have played this year, it is in with some huge names. You can’t beat a game, film, TV show or book that speaks to you on so many levels, and Life is Strange 2 did just that. It is bittersweet like a lost love – it broke my heart, but I wouldn’t change a single moment of the experience.

Find Life is Strange 2 on Amazon

All images belong to Life is Strange 2.