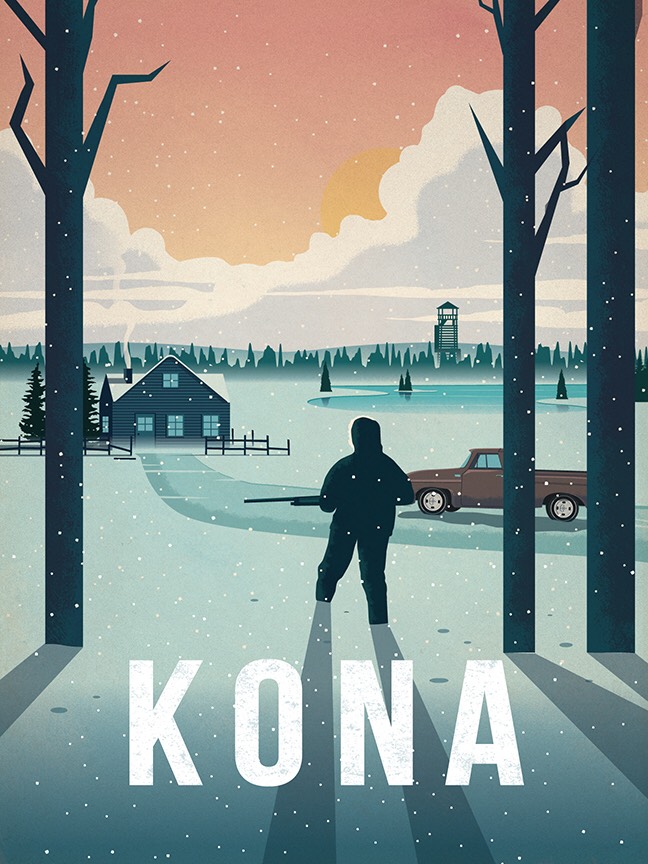 Welcome to The Subtext – I’m Dan and this is my third game review that ties in with my YouTube channel!

The two games we’ve looked at so far, Detention and Knock Knock, have been a bit on the unconventional side, excelling in terms of narrative and concept but falling a little short in other areas. Why break the habit of a lifetime? This week we’re looking at a bit of an unsung gem in the Switch’s library – Kona.

Kona was developed by Parabole and is set in rural Northern Quebec in 1970 – unlike Detention the setting simply serves as an interesting backdrop to events – it’s more like fancy window-dressing than anything of real importance to the game’s story. The game actually has a bit of a timeless feel – if it was set today, there’s the sense that everything would look exactly the same – like one of those small towns where, despite the passage of time, nothing really changes.

It begins in similar fashion to Stanley Kubrick’s The Shining or Shinji Mikami’s Resident Evil 4 – with a long car journey through the countryside – and what exactly does this tell us? It tells us we are cut off, and a long way from home. It’s an effective way to disempower the player – all good horror starts by stripping away the things that make us feel safe.

Kona is not strictly speaking a pure horror title – it contains elements of many different genres – but horror is present throughout and it ramps up the further into the game you get.

Kona – The Nuances of the Gameplay

If you spend too long out in the cold you will die – to avoid this, you must periodically warm yourself by a fire; and with snow comes poor visibility, meaning you can only ever see a few metres in front of you. Moreover, about halfway through the game night falls on the valley – visibility is reduced even further and there’s a lingering sense that you’re not alone. Like the thick sheet of fog in Silent Hill, this really makes you feel disoriented. Driving at night can be eerily realistic as you constantly check the darkness with your headlights – and when you step out in the dark on foot; it’s even worse.

There is combat in the game – you have a small arsenal of guns and melee weapons at your disposal, to take care of the few packs of wolves you’ll encounter – but the combat is nothing to write home about. It is cumbersome at best and at worst it seems like another pointless implementation of combat for combat’s sake. So, you’ll want to avoid enemies at all costs – not out of fear, but out of sheer annoyance. Though to be fair, the thought of bumping into wolves does just about enough to keep you on edge.

Towards the end of the game the horror really amps up. Unfortunately, the eeriness present in the early game is lost, and the attempt at more traditional horror is blundering. I won’t spoil the climax, but suffice it to say that it undermines all the atmospheric build that’s gone before. It’s always difficult to get horror endings right and I can count the number of satisfying horror endings I’ve seen on one hand.

The Atmosphere of Kona

Atmosphere is where the game really shines. It takes a little while to get its hooks in you, but once it gets going, atmosphere is piled on in spades and for a while the game is utterly compelling – until the poorly judged ending, that is. I don’t think we talk about atmosphere in video games enough and I want to take some time to break down the key components of Kona’s rich atmosphere.

The first is location – a deep, impenetrable, snowy forest stretching as far as the eye can see. It’s a welcome break from the endless stream of haunted houses and schools, which can get a little tiring. Of course, forests are also well trodden territory in horror, but here it feels more novel. Just being outside and not funnelled through myriad gloomy corridors is liberating – not many games of this ilk afford you quite so much freedom.

The second is situation – Kona seems to take inspiration from so called walking simulators: the player character arrives on scene in the aftermath of a cataclysmic event – typically the area is abandoned and the player must piece together clues to find out what happened.

In Kona you’re a Private Investigator, trying to solve the mystery of a community-torn-apart. Doing so mainly involves you ransacking homes left abandoned, which also happens to be a lot of fun. Kona isn’t just about looting though; you can drive; you can fight; you can even ride a snowmobile. Ultimately the emphasis is on narrative over gameplay, but the variety does help to immerse you more in the game world – and I did enjoy cruising around in my truck.

A world devoid of characters is in stark contrast to what we’ve come to expect and it can be a powerful tool to build atmosphere.

The third is style – throughout the adventure commentary is provided by a French-Canadian narrator – it’s quite a pleasant addition, setting the game apart stylistically from its horror contemporaries. It’s sort of reminiscent of those wisecracking narrators from classic 90s adventure games and brings some much-needed levity.

And why’s atmosphere important? Because there’s no horror without atmosphere.

Kona and the Nintendo Switch

How does it fare on Switch? Actually, it stacks up against other versions rather well. It’s not really a looker mind you – textures are repeated a little too often and tend to be on the blurry side. You’ll also notice a couple of visual glitches here and there. The framerate dips whenever things start to heat up, particularly towards the end of the game, and in general it never feels especially responsive – but it’s certainly functional. I feel like the dialogue recording quality could be a bit better, but the music sounds great and the controls are serviceable. Ultimately this version has reasonable parity with other versions, and any issues seem to be inherent to the game itself. It’s another nice addition to the Switch library, and as always, portable is the way to play.

Once again what we’re left with is an interesting game that doesn’t quite deliver. During exploration, when you’re soaking in its atmosphere, it feels a little like Fargo – and the more you explore, the more story titbits you’ll find. On the other hand, it’s very slow paced, visually it looks a generation behind, and it offers little in the way of challenge – not to mention that dud-ending. Should you play it? If you like immersive games with a slow build, I’d recommend it.

But it’s about time to wrap things up. Next time we’ll be looking at Syberia 3 for the Switch, so join us again for more capers. And don’t forget to like, subscribe to my YouTube channel and comment – importantly; what did you think of Kona?

And for another week, this has been The Subtext, I have been Dan and until next time!