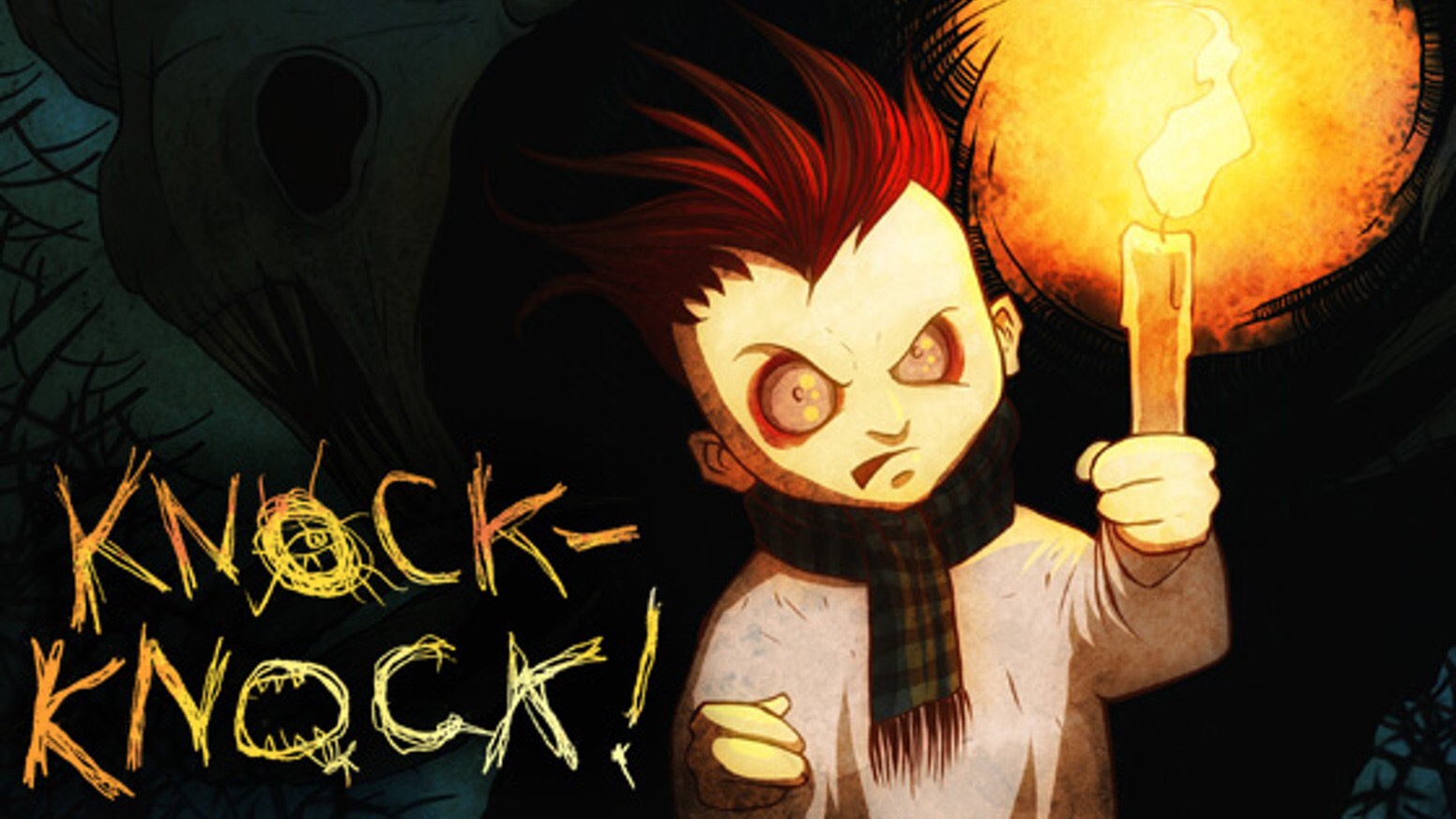 Welcome to The Subtext – I’m Dan and this is my second blog post (after Detention) and links to my second episode on my growing YouTube channel! This week we’re continuing our deep-dive into video game horror – and today’s subject is Knock Knock for the Nintendo Switch.

Knock Knock was developed by Ice-Pick Lodge – the same developer behind cult classic Pathologic – a relentlessly bleak survival horror game released in 2005 – and a game I’d like to cover at some point.

With its minimalistic approach and take-no-prisoners attitude, Knock Knock is not an easy game to pin down – after a brief cutscene you’re thrown in at the deep end, with no real explanation of what to do – for me, it wasn’t until the second half of the game that anything started making sense.

This obtuseness is probably both a blessing and a curse – as you play there is an unrelenting intensity, made more potent by the fact that most of the time you feel completely lost – when the timer runs down, the sun rises and for a split-second, you’re out of harm’s way – but what you do until then is up to you.

There’s a random element to the way the game works – every time the night resets, things are slightly different. This keeps you on your toes and prevents you from getting into a rhythm – and, as we touched on last time, rhythm is the antithesis to fear.

The moment the dealer reveals his hand is the moment the illusion vanishes – fear soon dissipates once you understand the game’s internal logic – a jump scare is never as scary the second time, or the ninth time, or the hundredth time – think back to the original Resident Evil and that moment when the dog jumps through the window – it’s never as scary when you know it’s coming.

And it’s the same with enemies – they’re much easier to deal with once you understand the way they behave – it’s no longer a matter of fear when you know that an enemy will stop giving chase as soon as you leave the room – it’s about how quickly you can react.

Knock Knock manages to avoid this trap for the most part – its horror is in short enough doses that you only ever get a basic understanding of how things work. Each night begins with you checking the house for intruders, but as the timer counts down and the house becomes more hostile, the protagonist gets increasingly agitated – encountering enemies can stall or even reset your progress, and in those final moments before sunrise, it often makes more sense to find a quiet spot and just wait it out.

The peril in these moments comes from fear of having to redo the entire section and not from horror present in the game – fear of fail states can be a powerful thing – just look at Dark Souls. The experience can be unpleasant, and the way in which things randomly unfold prevents you from ever feeling like you’re in control, but it’s more intense than frightening – the game excels at making you feel anxious, but maybe that’s the point.

You feel the anxiety the protagonist feels – an anxiety that seems to stem from mental illness. The protagonist is known only as The Lodger, and enemies are known as Guests – it is implied that Guests only exist in The Lodger’s mind – summoned into being by an onset of paranoia. And You, the player, feed that paranoia by blindly following his instructions over and over – double-checking rooms, lights and doors – indulging his dark fantasies – and soon the player begins to see the things The Lodger has been seeing. And as his madness intensifies so does yours and you encounter enemies more frequently – as the saying goes: “If the blind lead the blind, both will fall into a pit.”

The Lodger’s speech is incomprehensible, probably due to the madness that’s taken hold – it’s only by reading accompanying text that we can actually understand him – other voices in the game are in clear English – these voices seem to come from The Lodger’s own mind and it feels like they’re talking directly to the player. It’s actually one of the creepiest aspects of Knock Knock as it breaks the fourth wall and the safety barrier that exists between player and game.

The Art of Knock Knock

The artwork is slightly exaggerated to great effect – The Lodger’s design personifies his mental state – his hair is dishevelled and there is a manic look in his sleepless eyes – he looks just as hostile as the house itself. The colourful art style belies the game’s dark tone – it’s an effective juxtaposition that suits the game well.

Let’s discuss horror game pacing – why is it important? Think of horror as a scale from naught to one hundred – naught is catatonic – one hundred is all-out frenzy. When a game stays at one hundred for too long it can be overwhelming – at least until you adjust. And by throwing everything at you the game’s got nowhere left to go. Good horror knows when to lay it on thick and when to pull it back, and that means making use of the whole scale.

The Pacing of Knock Knock

Knock Knock’s pacing is only moderately successful – there are nightmare stages where the tension really mounts, and awake stages in between for you to catch your breath – there’s a nice contrast between the two stage types but the game doesn’t really do enough to keep things fresh, and that’s a real shame.

The Nintendo Switch version is solid, without any major shortcomings. The visuals are sharp and nicely detailed and the bold colours really pop, especially if you’re playing in portable mode. The controls are generally competent, although I found the directional buttons to be a bit more responsive than the analogue stick, and sometimes you need to hit a button a couple of times for it to register. Performance is steady throughout and audio is high quality, particularly if you’re using a good pair of headphones. I use, and highly recommend, House of Marley Liberate XLBT headphones for gaming.

My recommended way to play is in portable mode, using headphones as it makes for a more immersive experience, although it is worth noting that text can be difficult to read on the small screen. The Switch version is the ideal way to play on a cold, winter night.

The name Knock Knock is a little cliched – it was probably chosen in an effort to broaden the game’s appeal, particularly around Halloween. The horror is a bit of a mixed bag – what’s here is unlikely to play on your mind. But it is an inventive and fascinating little game, both thematically and mechanically, though not necessarily enjoyable – but can horror ever be described as fun?

The Appeal of Horror Games

It all makes me wonder why we actually chase fear – maybe because it’s an opportunity to look death in the face which, ironically, makes us feel more alive. Fear brings us closer to our base instincts, and perhaps there’s a sort of comfort to be found in that – it is familiar, yet unknown and unknowable.

But that brings us to the end of today’s game review – join me again for more horror capers.

This has been The Subtext and I have been Dan. Don’t forget to make your way to my YouTube channel “TheSubtext” and hit that subscribe button!