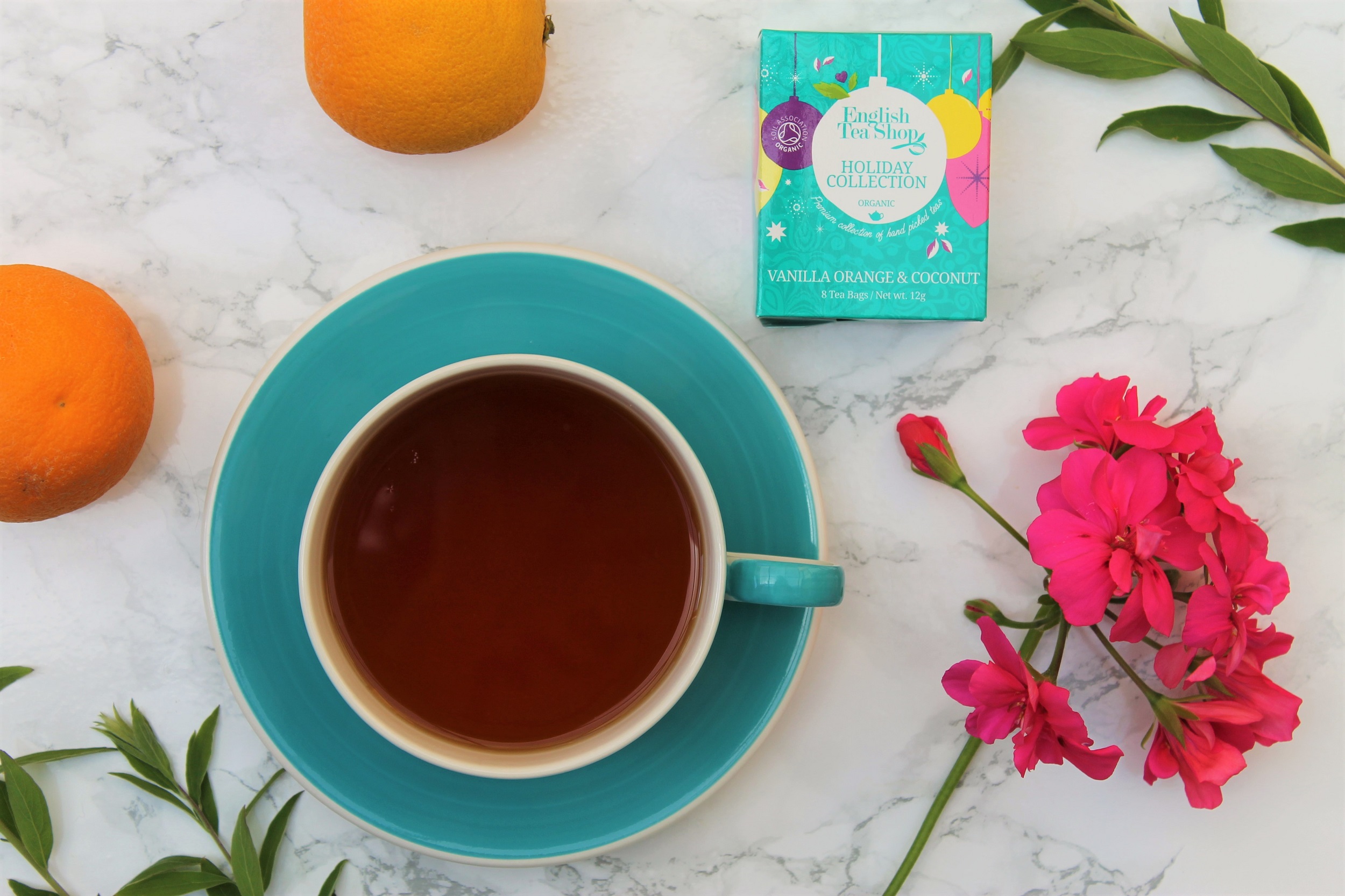 I’ve been steadily working my way through the holiday collection box, which contains English Tea Shop Vanilla Orange and Coconut Tea, throughout the year. Today, I’m finally delving into this interesting combination of ingredients!

With a rooibos base, plus three ingredients that are all quite sweet in distinctive ways, this will certainly be an interesting experience.

In my review below, read my first thoughts when I tried this tea, some tips on brewing it, and a link for you to buy it and give it a try for yourself.

This tea is quite pleasant, thanks to the naturally honey-sweet and nutty rooibos base. However, besides the orange peel and spices, there isn’t much flavour to be found. 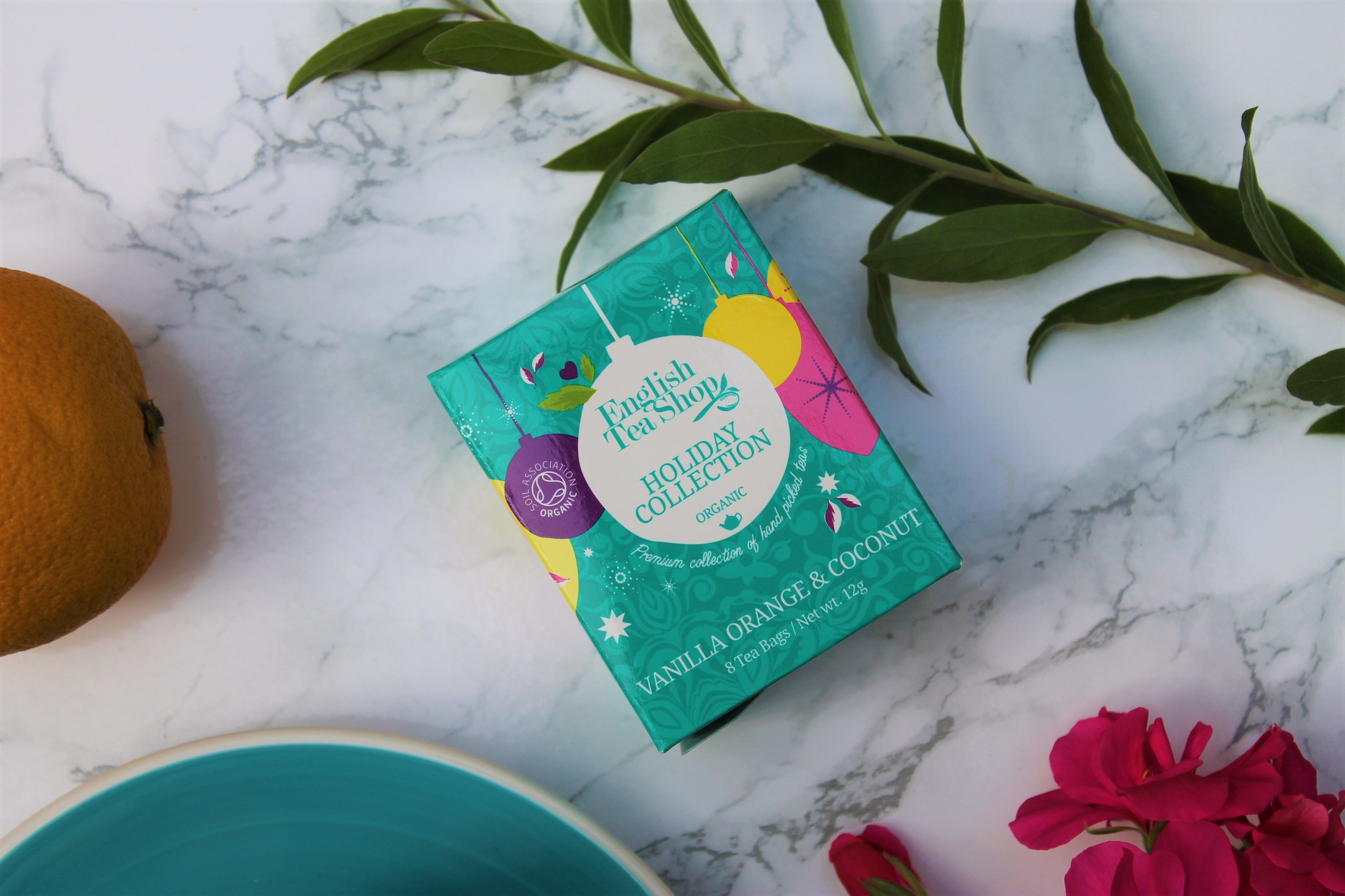 The plastic that wraps around each teabag is wasteful, but it works well at sealing in the aroma and keeping this tea fresh. I liked the initial aroma I got from opening this teabag – the rooibos is dominant, with those honey and nut notes that you expect, but there’s also a tinge of orange, cloves, and other spices that tingle your nose.

This tea brews into a dark caramel tea colour (I found that it favours long brew times when I reviewed English Tea Shop Vanilla Orange and Coconut) that’s quite clear and free of dust.

As for the aroma of the brewed tea, it’s significantly more tropical with juicy orange notes, rooibos, and a hint of vanilla. The flavour matches that aroma, with rooibos being the biggest and boldest flavour in this tea.

The orange hints are slightly bitter, like orange peel, and the cloves create a slightly spicy effect. This orange, nuts, honey and cloves combination is incredibly Christmassy, and the smooth, slick and hydrating mouthfeel is lovely too.

But wait. What about the coconut and vanilla?

Unfortunately, I couldn’t really detect these flavours in the tea at all, whether I brewed it lightly or strongly. 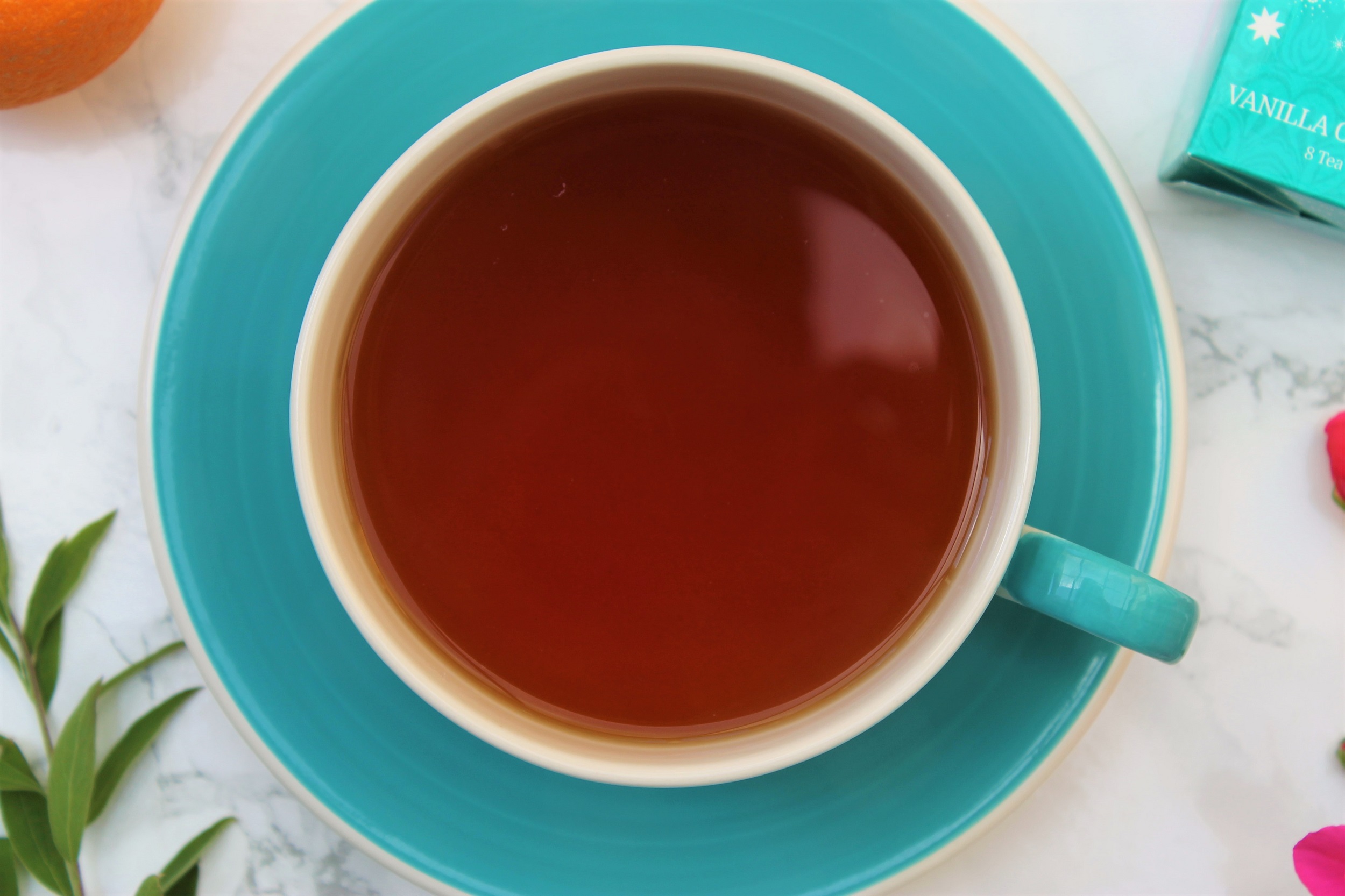 How to Brew Flavoured Rooibos Tea

Use boiling water fresh from the kettle and pour it over this tea bag. Let it steep for at least 5 minutes, stirring occasionally. I use 1 teabag per 200ml teacup, so if you’re brewing a large mug (closer to 500ml) then brew 2 teabags at once.

It’s okay to pour in the water and then get distracted with something else. The tea can handle being left alone, so there’s no need to panic if you over-steep it.

I found that a nice squeeze of honey is pleasant in this tea, but you could try lemon instead if you want a fresh flavour. Some people like to add milk to rooibos tea, but I’m not convinced that it will work with the orange pith notes in this rooibos blend.

There are some really nice things about this tea: it’s Soil Association Certified Organic, which means that even the natural flavourings that create the coconut element are good for you and the planet. I also like the idea of this tea – it’s an unusual flavour combination, but in my head, imagining it kinda works! If all the flavours were actually present, I imagine it would work nicely. 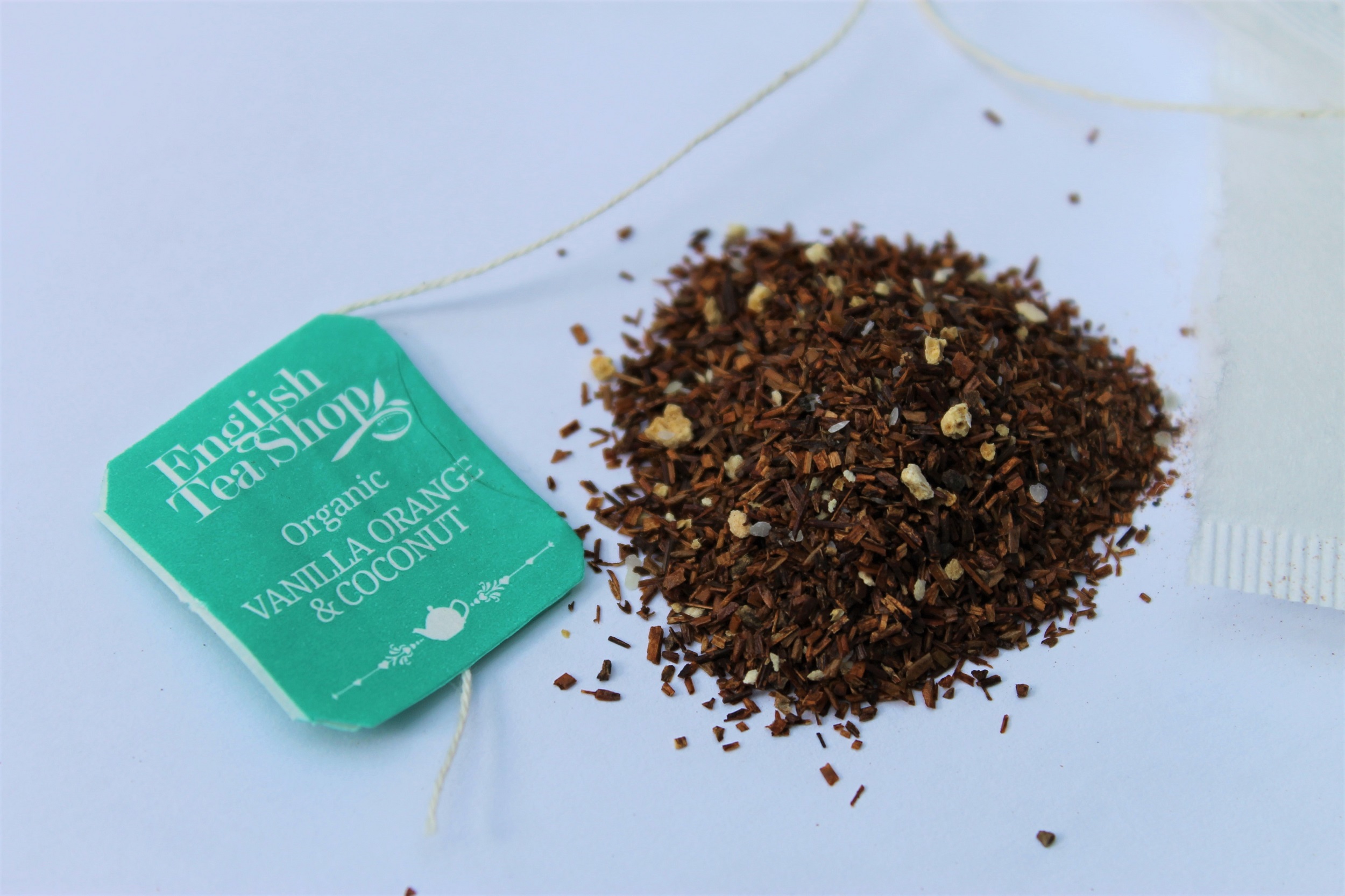 What I dislike, however, is the packaging and delivery of this tea. There is a lot of plastic used to wrap each individual tea bag. Furthermore, each tea bag only contains 1.5g of tea. That’s a small amount – the standard for a decent tea bag is 2g. The premium tea pyramids can sometimes contain up to 5g. You really notice this small portion size in the final cup of English Tea Shop Vanilla Orange and Coconut Tea.

I do recommend trying this tea as the flavour is pleasant, even though it’s not as advertised. With many of the ingredients being organic too, this is a great tea for the planet as well as your health. I’ve found it available in the red Holiday Collection box by English Tea Shop, so that’s the best way to try Vanilla Orange and Coconut tea. 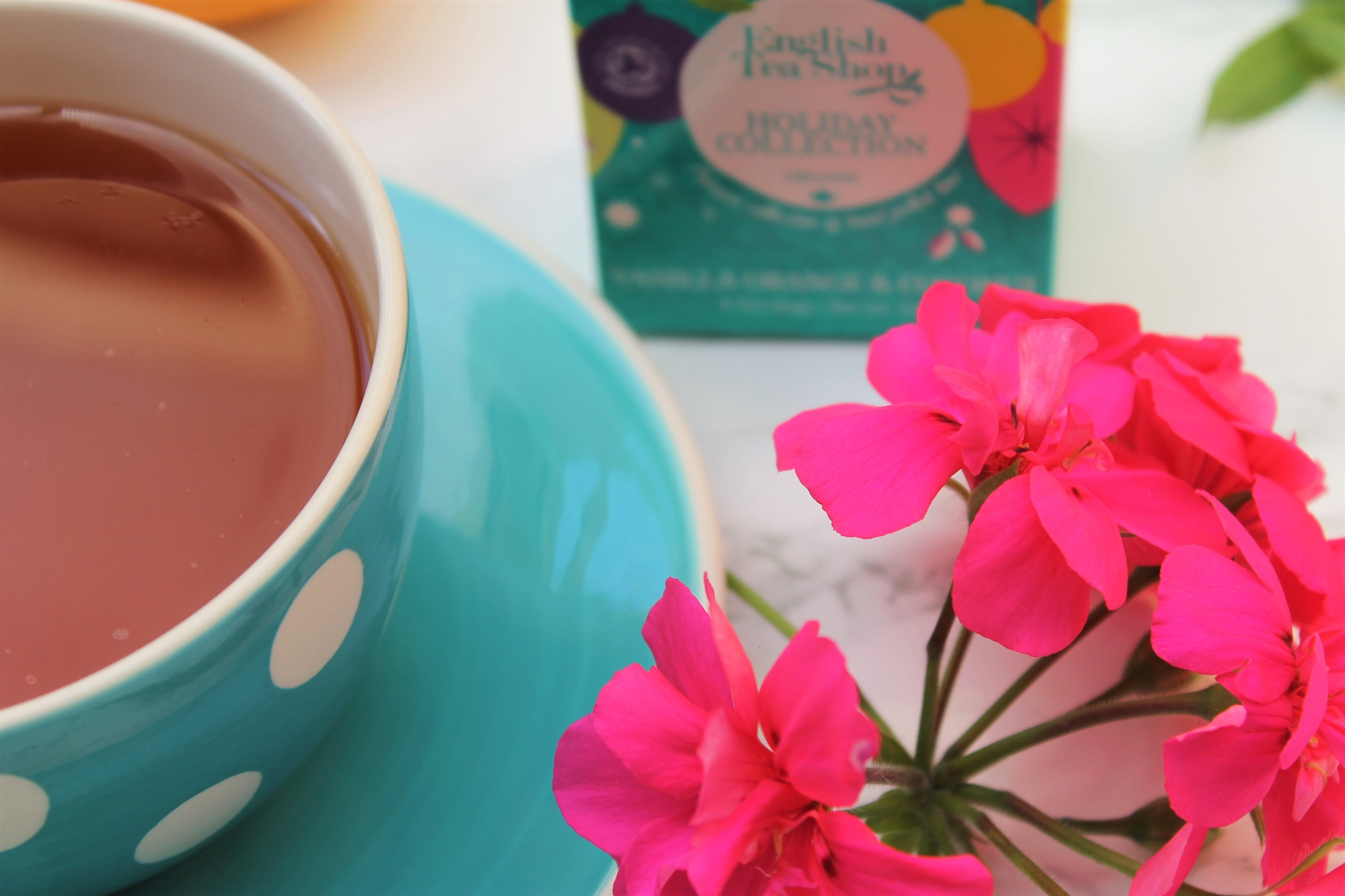 I haven’t reviewed many coconut teas, but you can still find a few unusual coconut tea blends on my blog. To find all my tea reviews and navigate them by flavour, brand, or type, check out my Tea Review Index. You can also send me requests for tea reviews directly by finding me on Instagram via @izzysden!