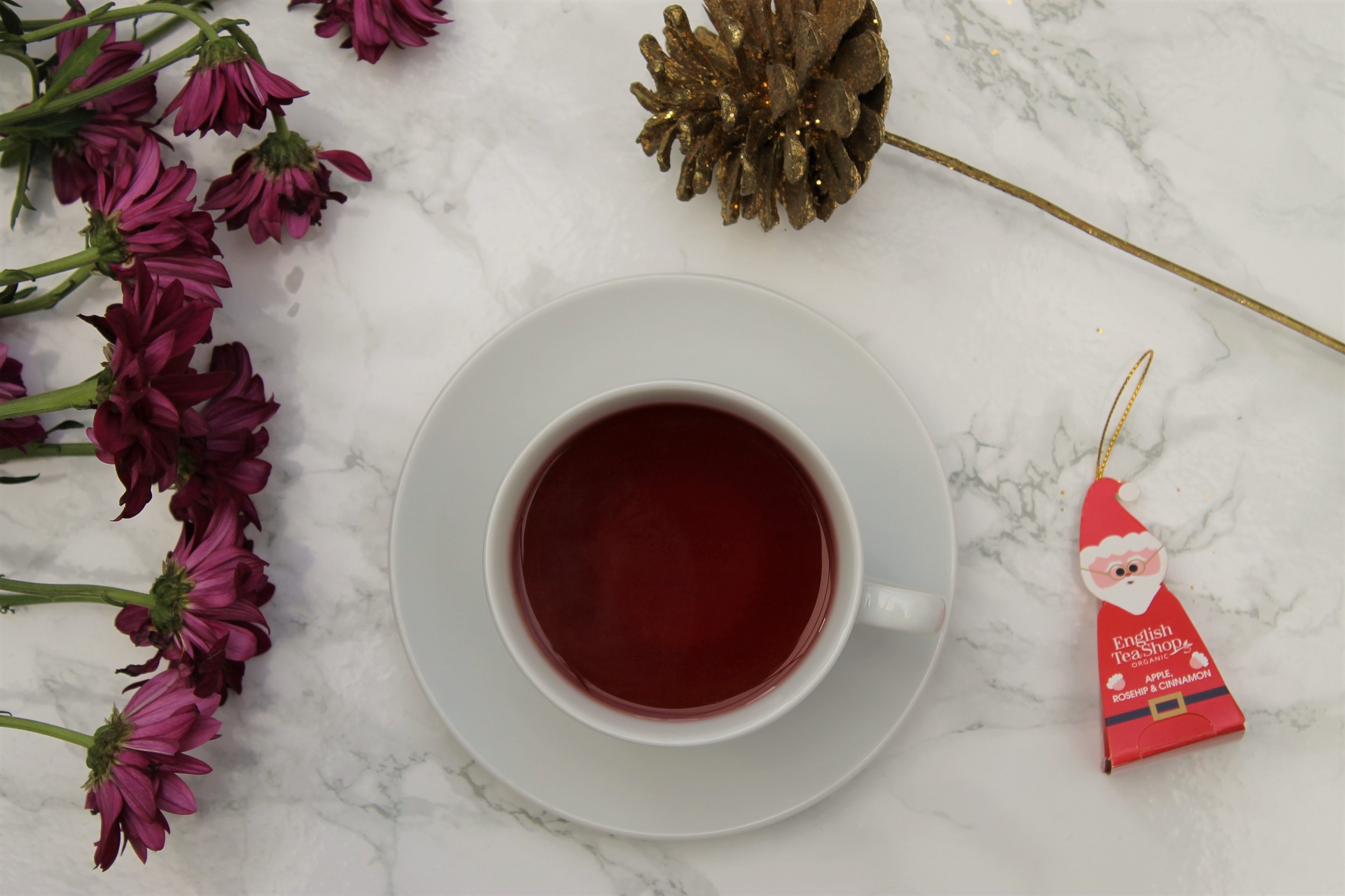 Ah, another Christmas tea before we’ve even got to Halloween. Well, I’ll definitely be prepared for the festive season! This week I’m reviewing the English Tea Shop Apple Rosehip Cinnamon blend, which is actually a hibiscus dominated fruit tea.

Yep, hibiscus is the main star. If you know you don’t like hibiscus, then save your time and find another of my tea reviews to read. This is a heavy hibiscus blend, and you really can’t avoid the tart, fruity flavour.

If hibiscus is your jam (like it is mine) then keep on reading to find out what this tea tastes like, how to brew it, and what other ingredients are included in the mix.

Example Tea at a Glance

This is a fantastic fruit tea. The hibiscus delivers the biggest punch, but the apple and rosehip bring it down a notch. Cinnamon and subtle berry notes add depth too. It’s a lovely blend! 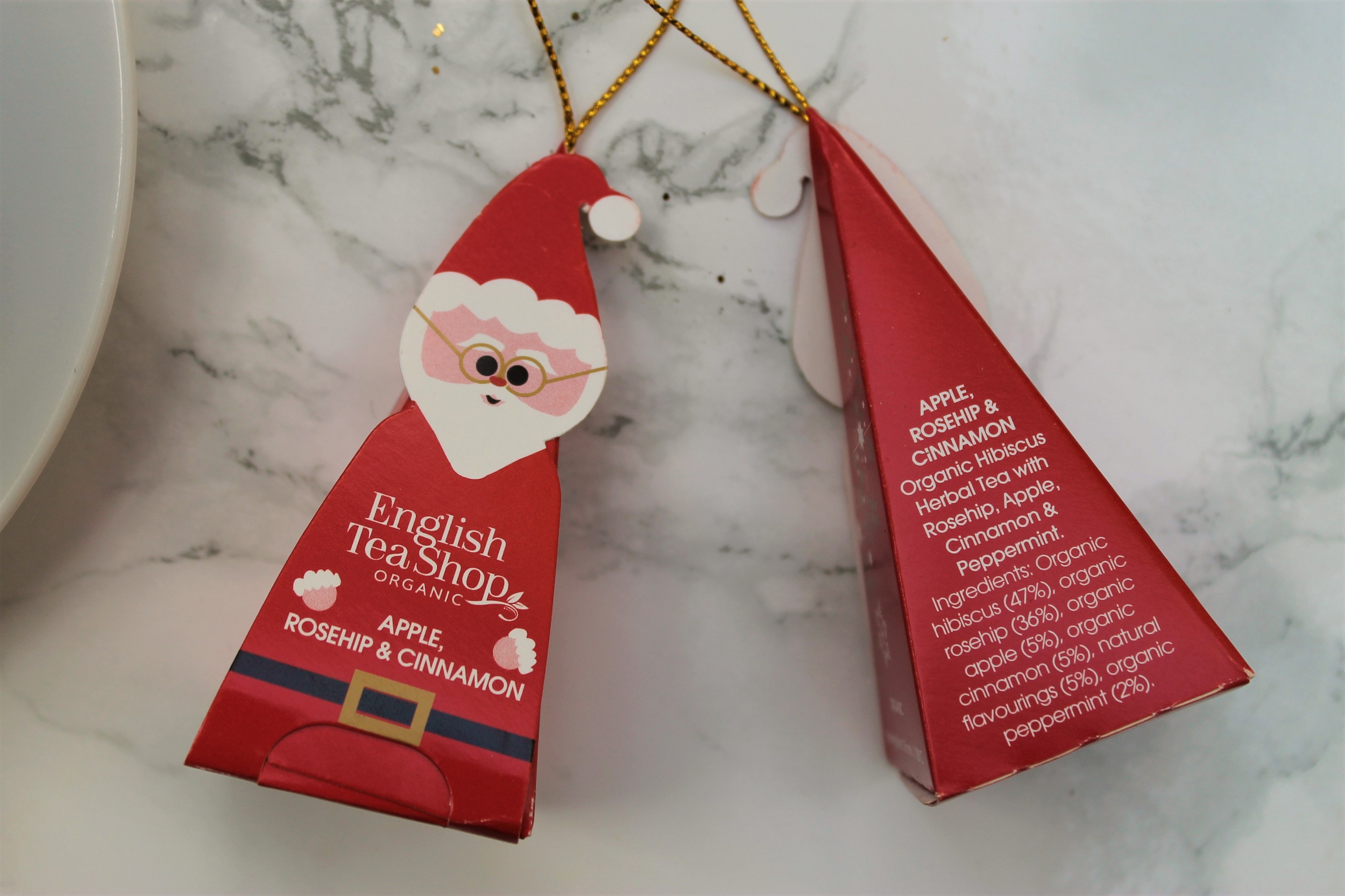 From the second you open the little Christmas tree decoration box (that gold loop is so you can hang it) you’re hit the unmistakable scent of Christmas. Dried cranberries, apple and Christmas spices assault your senses. All that’s missing is a little orange and cocoa to really hit that festive note. Delicious!

It brews into an intense ruby-magenta tea colour that’s typical of any hibiscus tea blend. You really can’t stop it! The tea gets dark quickly, so watch it carefully unless you like very intense, deep, and strong tart flavours.

The aroma from the brewed tea reminds me of the red jelly layer of a trifle. We always have trifle at Christmas rather than a pudding – it’s lighter, which leaves more room for turkey. There’s also a note of red currants that’s truly mouth-watering.

The flavour follows suit. Each mouthful contains a mix of berry notes. I detect cranberries, red currants, blackberries, raspberries, and strawberries with added tartness from the hibiscus. It’s a drying tea at first, but then a rush of moisture floods in after each sip. It’s lovely.

The rosehip and apple notes are subtle, but they add some lightness to this tea. There’s a hint of cinnamon too, but that’s mostly in the aroma.

You can find fruit teas like these all over the market. With the rosehip and cinnamon being quite subtle, this tea doesn’t stand out much. Nonetheless, it’s a tried and tested classic fruit tea flavour that always has a place in my tea cupboard. 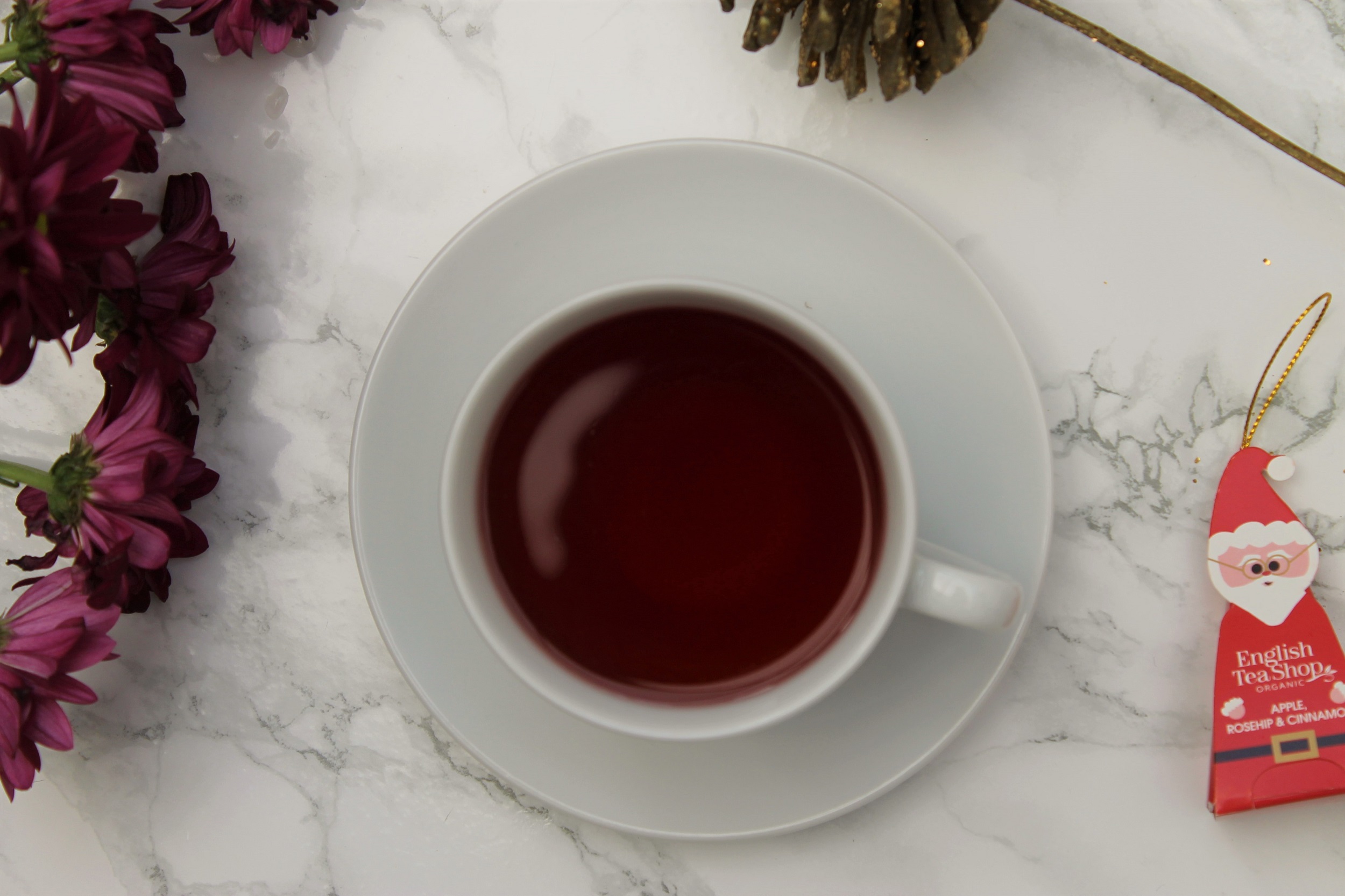 This tea only contains fruit and herb pieces. There’s no leaf from the Camellia sinensis plant in it. As such, feel free to use boiling hot water and let it steep for as long as you like. You won’t get any caffeine from it either way.

I brewed my 2g tea pyramid in 250ml of water for 4 minutes. This hit the spot perfectly for me. If you’re less keen on hibiscus, brew for 2 minutes and take a sip. Brew for a minute more if needed.

To me, this tea is perfectly balanced between sweet and tart. If you have a particularly sweet tooth, add a teaspoon of honey to it.

I always have a pack of English Tea Shop teas around Christmas time because they always do amazing festive blends. Some are traditional and some take you by surprise. ETS Apple Rosehip Cinnamon definitely falls in the former category. A red berry tea is a classic at Christmas time. Actually, it’s pretty great all year around. 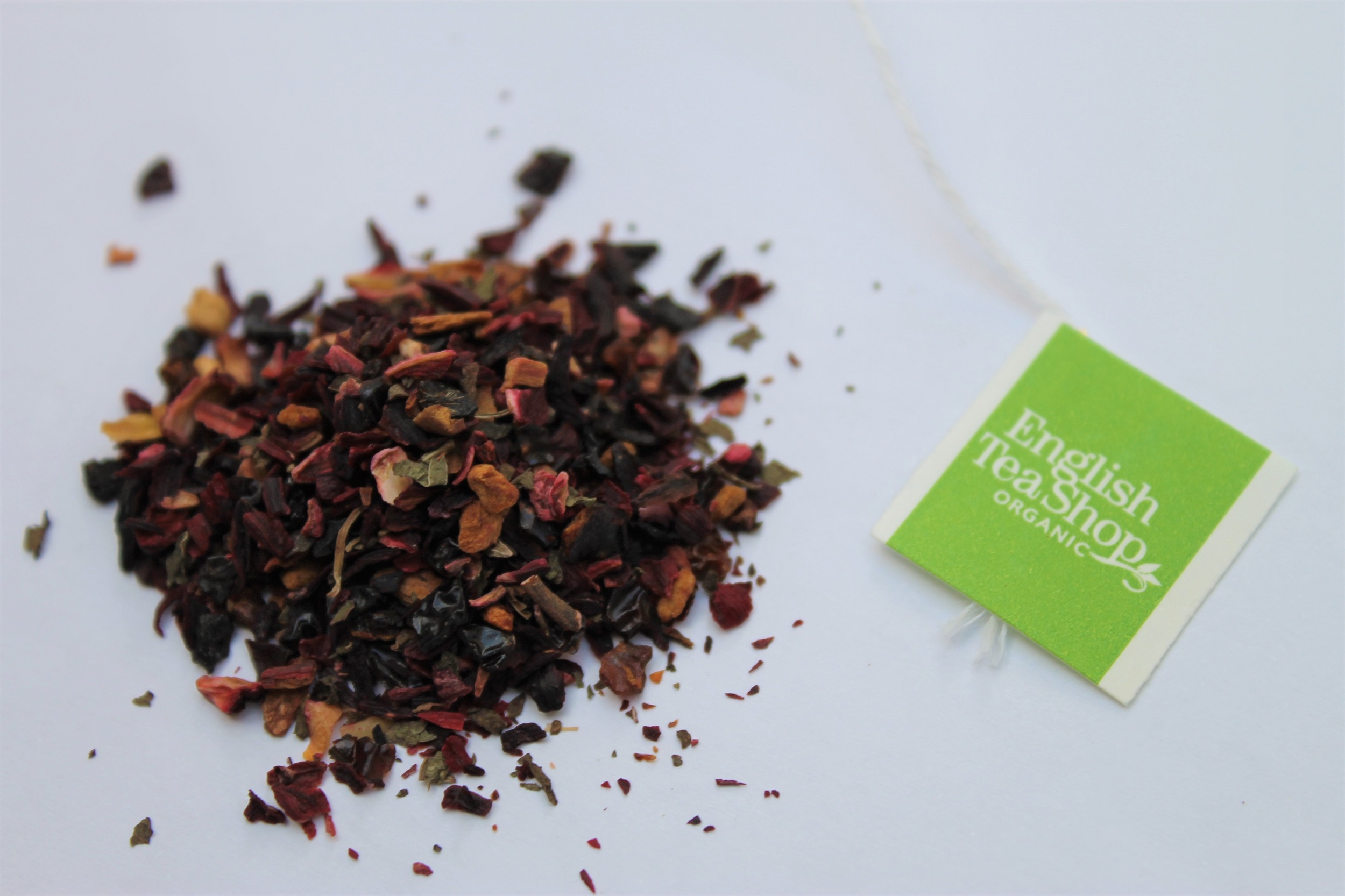 You can see from my photo that the fruit pieces are in small chunks. This is fine for a tisane. Furthermore, all the ingredients are marked as organic and have the Soil Association seal on them. This blend does contain flavourings, but they are all natural. No colourings or sweeteners are added.

Cinnamon and hibiscus are both great ingredients for your immune system. Rosehips are a great source of vitamin C too, although boiling water does tend to eradicate the vitamin C molecules.

I highly recommend checking out this tea and the whole Christmas Tree Collection box that it’s a part of. You may be able to find this tea on Amazon, but if not, head to your nearest T K Maxx in the UK. On a blue moon, you can find it there too. 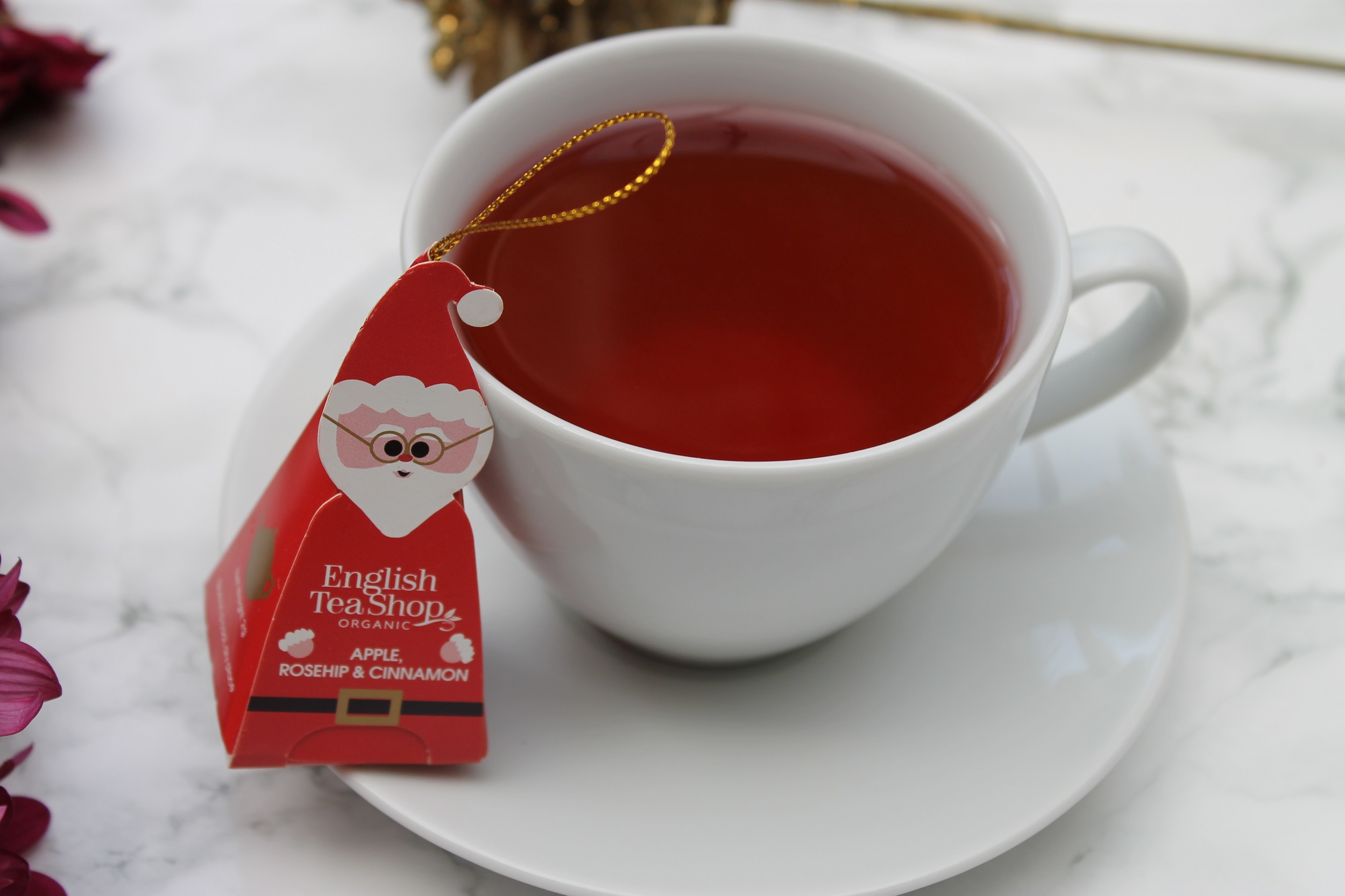 If you want a good hibiscus tea, then I have a guide that’s written just for you. Check out The 10 Best Hibiscus Teas for Hibi-Lovers. It contains some of the best hibiscus blends (and pure hibiscus) teas that you can find in the UK, from British tea companies.