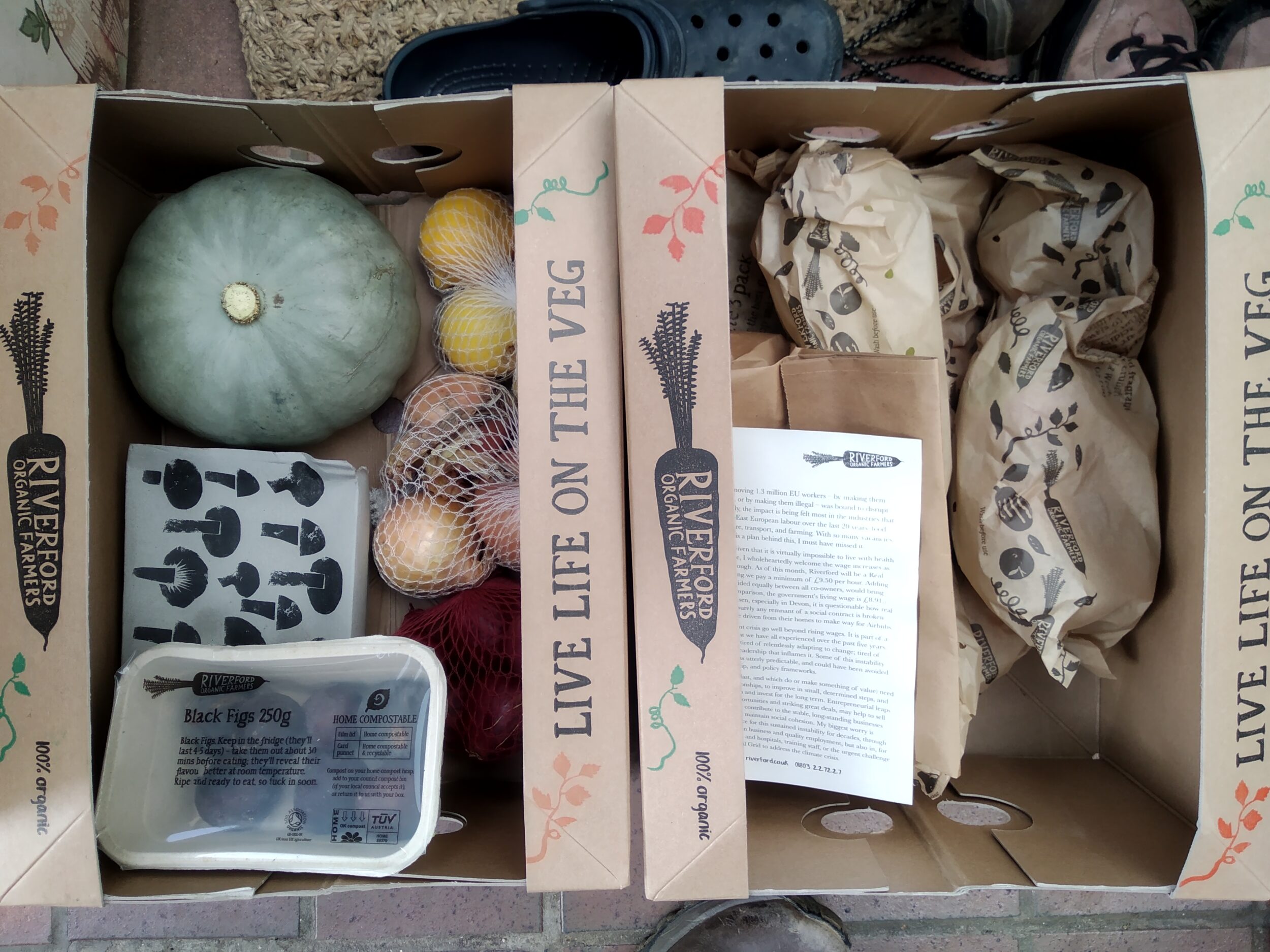 For over a year now we’ve been receiving a weekly fruit and veg box from Riverford. Before that, we subscribed to a local grocery box that was set up during the first phase of the COVID pandemic, when no one wanted to visit the supermarket.

But are they worth the money, or are you better off picking up your veg the old fashioned way? I’ll explain my opinion plus the pros and cons of veg subscription boxes below.

They aren’t for everyone, especially if you are on a budget.

The Pros of a Veg Box

Sometimes there are items in the veg box that you’d never normally order that end up being a real treat. For us it has been black figs, pomegranate, and whole corn on the cob. They allow us to try new recipes and keep things fresh in the kitchen.

It’s organic and good for the planet

Many, if not all, grocery box subscriptions have an eco-friendly edge. In the case of Riverford, all the food is organic and delivered in entirely biodegradable packaging. This is great for the planet and it makes you feel good too. Furthermore, there’s something a bit special about opening a box to find whole carrots, with greens attached and dirt still clinging to them.

You’re part of an exclusive club… Sort of

This one doesn’t really count for anything but buying a veg box gives you a feeling of community. With Riverford (yes, they’re my go-to example) you get a weekly leaflet with a little article written about what’s happening in the farming world right now. Sometimes it’s pretty interesting. Other times it gets very political, which is annoying but not a dealbreaker.

The Cons of a Veg Box

You can’t always pick and choose

A veg box can be seriously limiting. Even when you can customise the box, there’s rarely as much choice as you’d find at the supermarket.

One week we received this odd-looking vegetable. After working out what it is, we attempted to find a recipe for it. Unfortunately, no matter how you cook a kohlrabi, I still strongly dislike it. And that’s saying a lot, because I am actually a veggie lover.

Then the next week, we received another. And then the same happened the next week. After yet another disastrous kohlrabi coleslaw, we threw them away. And this leads me onto the next point.

One of the things about veg boxes that I liked (initially) is that they often deliver you in-season foods. This encourages you to use British grown veg rather than importing strawberries from Spain because it’s October, for example.

But when it’s kohlrabi season (or whatever your vegetable Achilles heel), you’re screwed. This was something I really didn’t like about the veg boxes I’ve tried. I feel like they pressure you to cook the same “British” meals over and over, or risk going to the supermarket… which leaves you feeling un-eco-friendly.

P.S. in the end, we figured out how to adjust the box so we never receive another kohlrabi. But the memory lingers.

Wonky veg? Bring it on. A little mould on my courgette? I’ll just chop that bit off. These things happen when you’re buying organic, natural vegetables and I’m totally fine with that.

But there are times when it puts you at a real disadvantage. Like the box of figs where most were seriously overripe, and the other two were seriously underripe. We had another month where all the lemons we received went mouldy in days, which was just weird as usually lemons last ages in our fridge.

If we had shopped at a supermarket, or even shopped at an eco-friendly green grocers or loose food shop, we would have spotted these issues and picked better produce. But with a veg box, you’re trusting someone else to select your food for you.

This is a huge problem for me, for a few reasons:

At first, I was very happy to pay a higher price for organic veg that saved me the hassle of shopping at the supermarket. But now, I’m not so sure. Given the extra waste it creates, plus the fact that I still end up going to the supermarket when the box falls short, makes me wonder if it’s worth it at all.

Conclusion – Should You Get a Veg Box?

You should try a delivery veg box if you fit these criteria:

For now, I will continue to use the Riverford food box service. Most of the time, it’s pretty good. But as soon as a loose food shop opens in my area, I will definitely switch to buying veg in-person. I don’t want to use a supermarket, but for now, Morrisons continues to fill the gap the veg box leaves.

What are your thoughts? Let me know through Instagram @izzysden to chat.