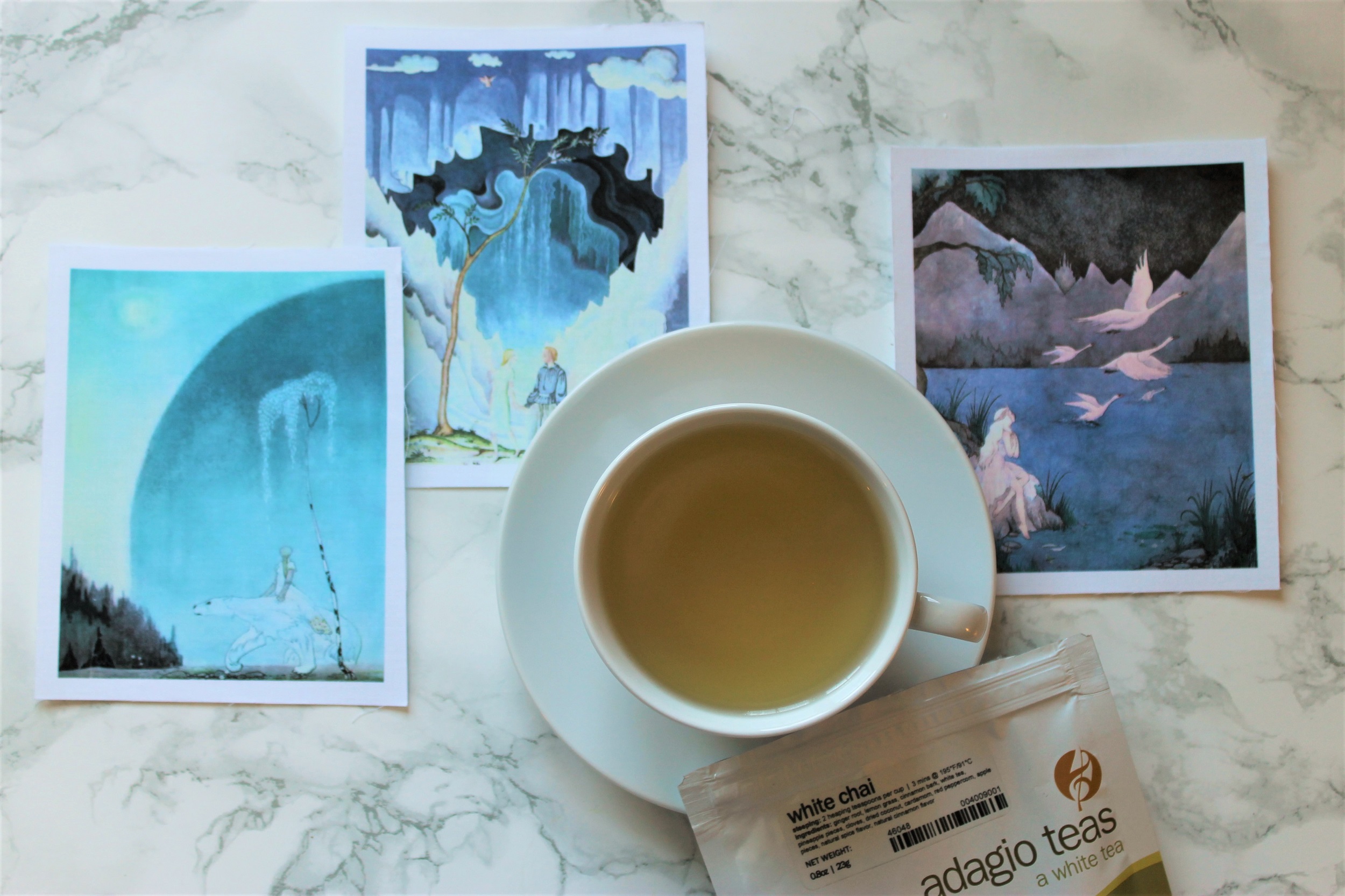 It’s almost that time of year and I’m sitting by the window, watching the dismally mild weather drip down the glass. I’m dreaming, hopelessly, of a white Christmas. And this is the tea I’ve chosen to fit the mood – Adagio White Chai.

Adagio has a whole host of different chais to select from this year in the run-up to Christmas. This one is an unusual blend of exotic fruity flavours and the classic chai spices you’d expect. I’ve tested it out thoroughly to find out if it’s a harmonious blend or a storm in a teacup.

From the ingredients list, it looks like an odd tea but actually, it really works. Pineapple adds a gentle sweetness to the white tea while the classic chai spices add warmth. 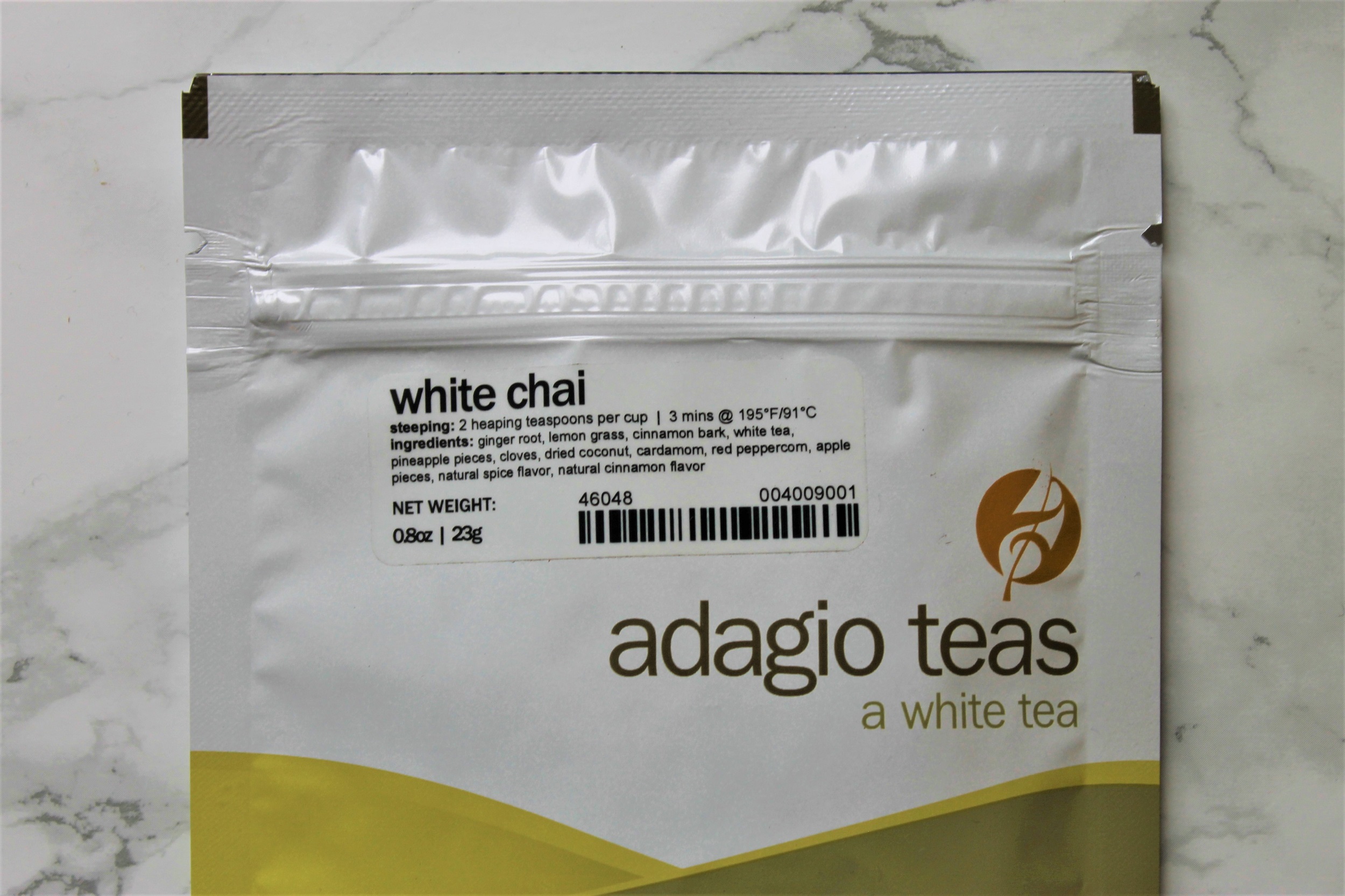 Ripping open the packet, the lemongrass is the first aroma to tingle in your nose. It’s sweet and lemony with notes of cloves and cinnamon. There’s also a sticky sweet undertone that reminds me of stewed apple.

It brews into a pale yellow tea – almost identical to the light cloudy colour of pineapple juice from the tin of pineapple chunks.

The aroma has definitely left the exotic behind and headed into chai territory once it has brewed. Quite like Novus White Mulled Wine Tea, this one reminds of spiced white wine – sweet, sharp and spiced.

The flavour is subtle with the naturally sweet white tea at the heart. Soft spice notes catch in your throat and warm your mouth nicely thanks to the ginger. Hints of citrusy lemongrass and sweet pineapple are super subtle and linger into the aftertaste. 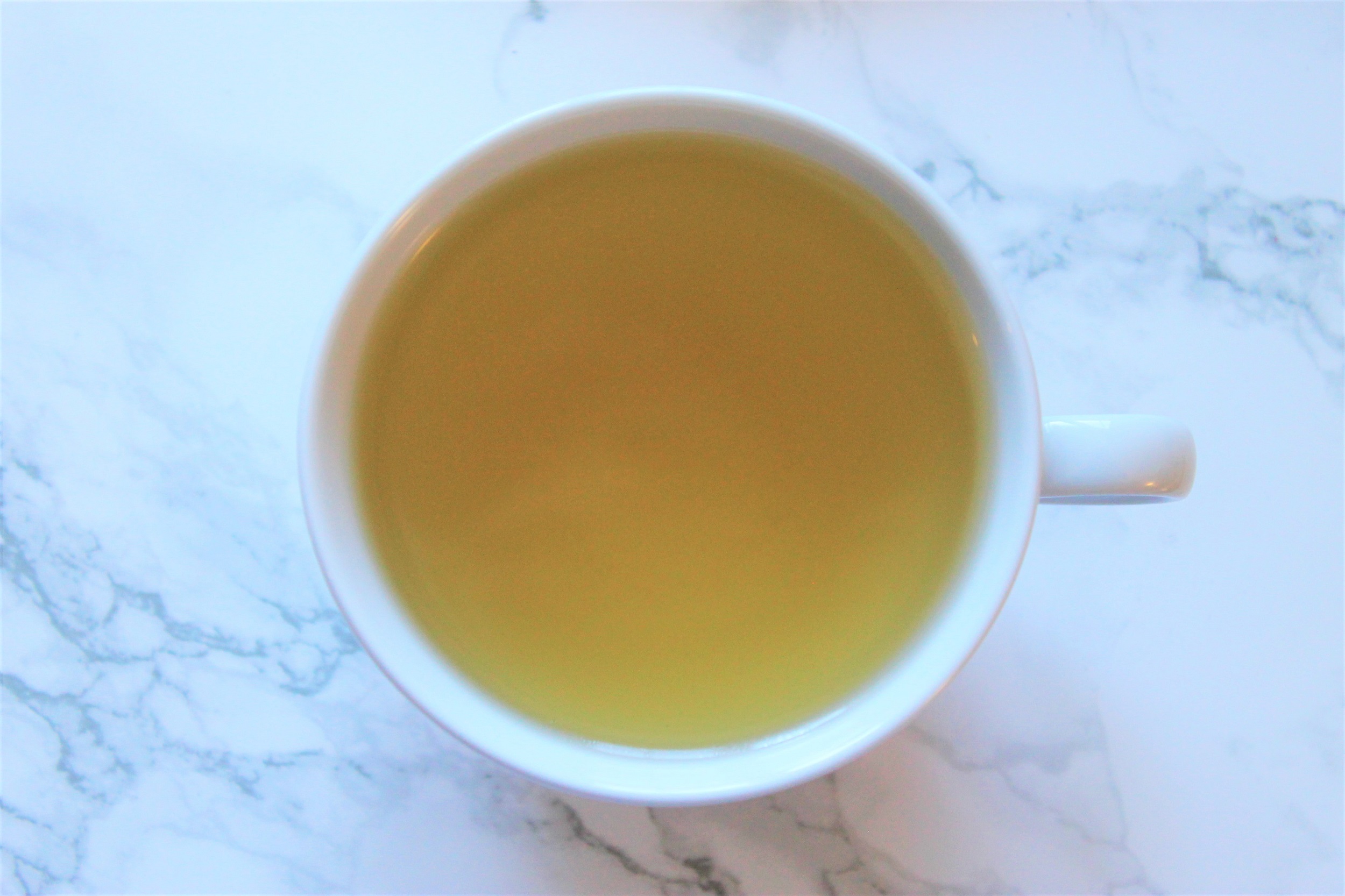 How to Brew White Chai

I followed the instructions, brewing for 3 minutes at 90°C. This was pretty much perfect for me, but if you like your tea strong you’ll want to brew for a minute or two more.

No milk or sugar needed – it has a smooth natural sweetness.

As for when to drink it, you could down a cuppa whenever you feel like it. Adagio label this tea as low caffeine, so you can enjoy a few sips in the evening no trouble.

Even though they use flavouring in their teas besides the natural ingredients, I really love the line of Adagio chais. They don’t seem to use flavouring to cover up natural flavours or create the base of the tea, instead the natural cinnamon and spice flavours in Adagio White Chai add subtle notes that make the tea a tad more complex. 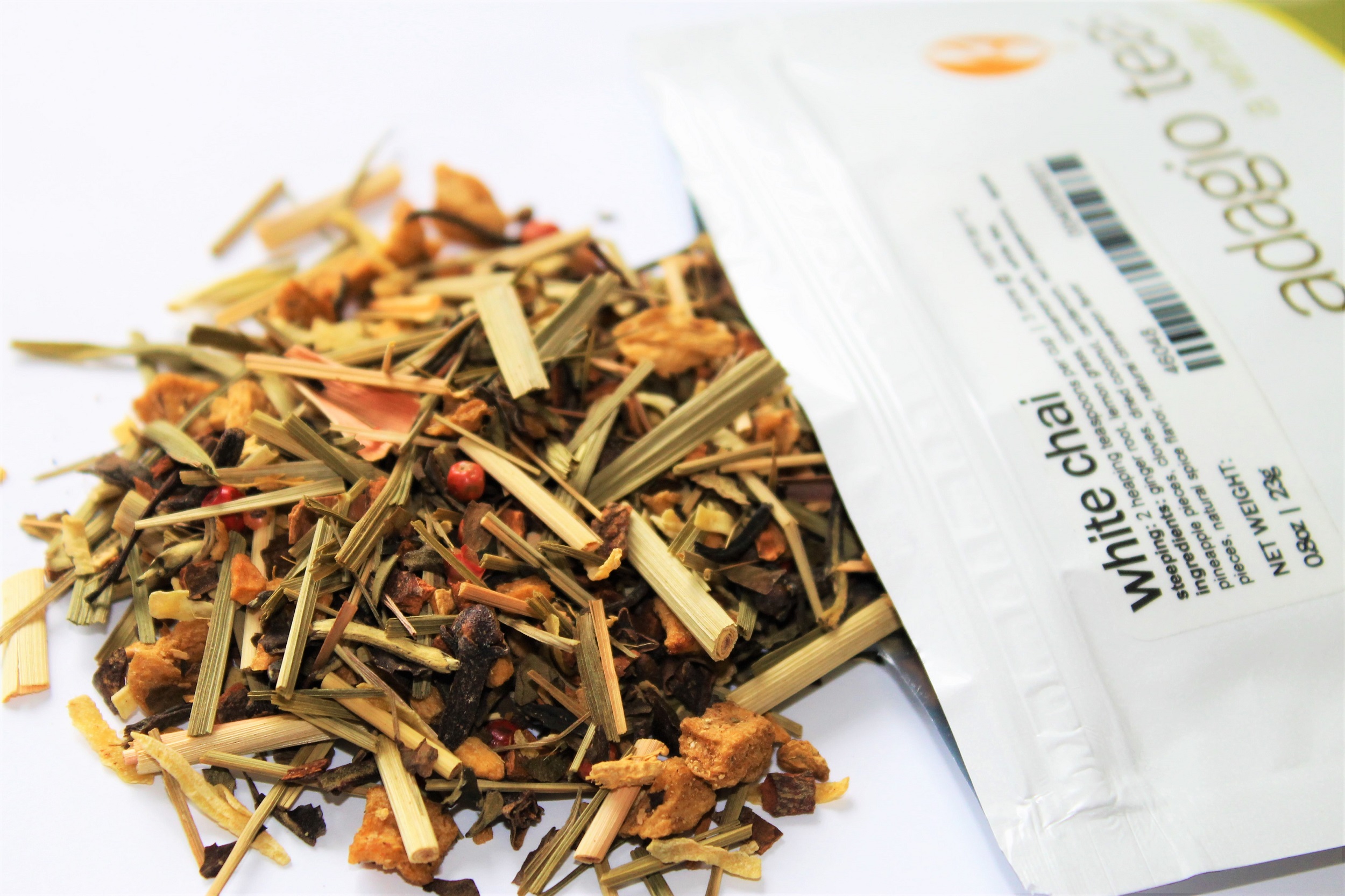 It’s also a visual treat. Just look at the colours and vibrancy of the ingredients included here and the size of the lemongrass shards. The quality of the white tea might not be stellar, but the herbal ingredients added are whole and bursting with flavour.

I would recommend this tea in a heartbeat. It’s a sweet, light chai that warms you with comfortingly familiar spices and excites you with new sweet pineapple notes. Check it out for yourself by buying a sample pack at Adagio. They have a UK and a USA site. 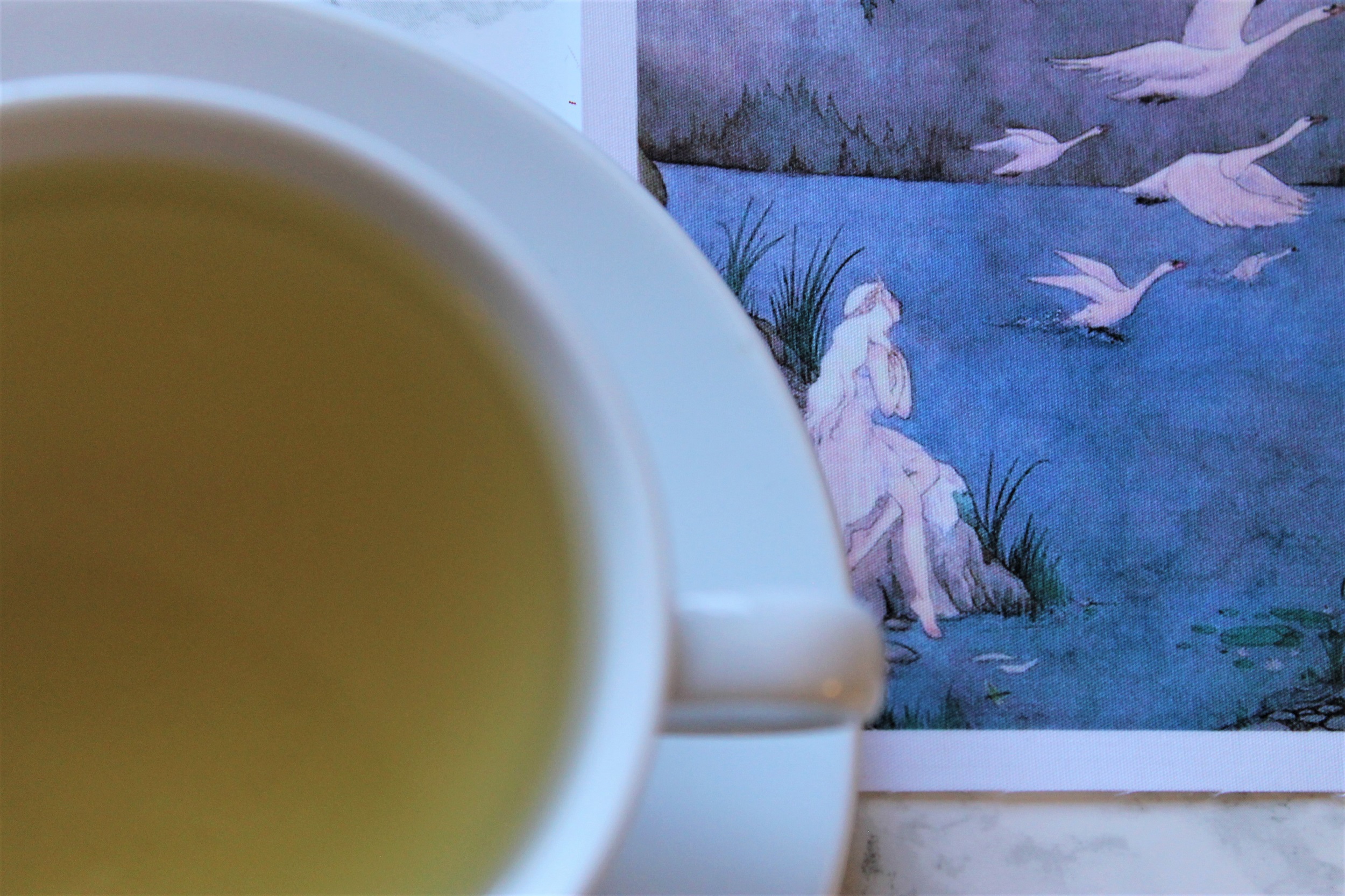 Looking for more Adagio Teas chai? Head straight to my Adagio Thai Chai review for more lemongrass and spice goodness. This one has a touch of coconut too. You’ll love it or you’ll hate it.