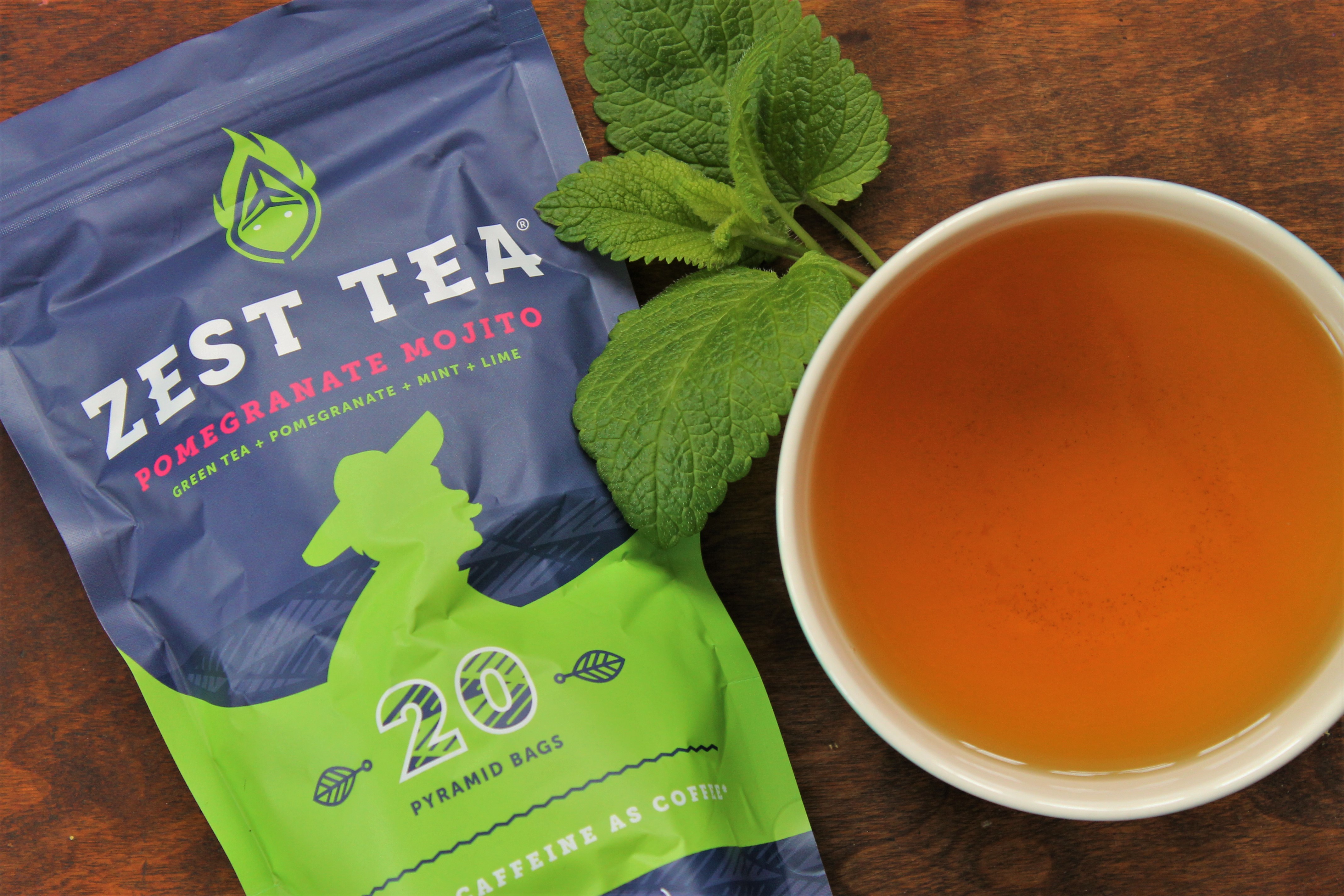 Like a real mojito, this tea turned into a drink that I dared not have too much of. It’s strong, minty and very refreshing. The perfect drink for summer – if summer ever arrives in the UK. Dreaming of warmer days where I can relax in the sun, I wrote this Zest Tea Pomegranate Mojito Tea Review to share with you all what Zest has in store for us.

Although all Zest Teas are designed as high energy, performance teas with high levels of caffeine, this tea was oddly relaxing.

Pomegranate Mojito at a Glance

An intense cup with bright menthol minty-ness and warm green tea base. Unfortunately, there’s really not as much pomegranate flavour present as the name would suggest! Still a good cup, very refreshing and ideal for iced tea. 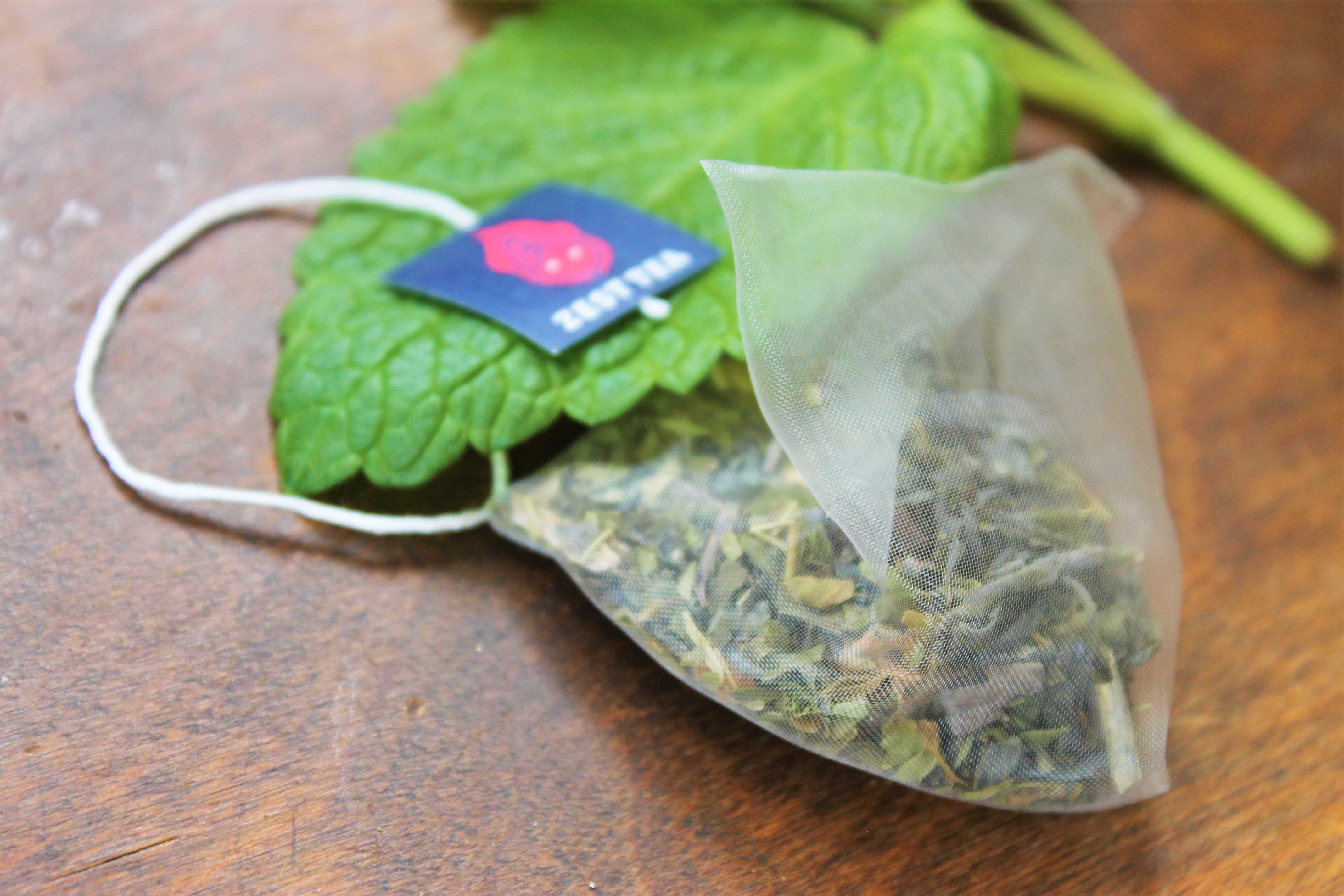 I have a full pouch of this tea with an airtight seal – I love the way the aroma always slaps me in the face when I open it. The loose leaf is excellent too.

The initial aroma I’m getting is fruity pomegranate swirled with bitter and intense mint. The menthol is cooling on my nose and in my throat. I would say this is garden mint rather than peppermint though, as it’s slightly sweet and warm. Spearmint.

Once brewed, you lose all of that subtlety and it becomes a mint-dominated green tea. Simple but intense. The flavour reflects that. Each mouthful delivers a slightly sweet mint flavour with warm, golden Chinese green tea base. The menthol only makes an appearance in the aftertaste.

It’s strong and any hope of tasting the pomegranate flavouring is lost on me. Although I enjoyed the green tea and mint flavours, they were too intense for me to finish the whole cup.

How to Brew Green Mint Tea

I left my water to cool to exactly 80°C before dunking in the tea sachet. I let it sit there for 3 minutes until I had a slightly murky green-yellow tea liquor. There’s a hint of light golden orange too. The murkiness slowly settled as it cooled to drinking temperature, leaving a few small particles in the bottom of my cup.

I did enjoy this cup of tea, but it’s kind of like brushing your teeth. It’s great for refreshing and cleansing your palate after eating something heavy (a sticky chocolate brownie for example), but you don’t want to waste too much time doing it. It’s intense. Like toothpaste, you don’t want it lingering around for too long.

Next time I drink this, I’ll brew it into an espresso cup. It would be good as a green tea shot!

Each cup of Zest Tea Pomegranate Mojito contains about 135mg of caffeine. Usually a green tea contains 30mg per average, black tea is about 50mg and drip coffee is about 90mg. So, you can see it’s a lot and if I’d finished the cup I’m sure I would have felt the difference too.

The tea in the sachet was broken but not tea fannings, just broken leaf and a little dust that made its way to my cup. Mediocre quality. It’s also worth noting that although the mint is real, the pomegranate is an added flavouring rather than dried pieces of fruit.

Brewing Zest Teas gently is the cure to the bitterness that the tea extract adds. With this one, brewing at 80°C was imperative. Don’t mash the sachet against the side of the cup either.

This is a good mint tea, very refreshing and definitely something I’ll drink again. But be warned, it is intense! And there’s not much pomegranate going on here. If you like refreshing teas and mint teas for the summer months (I can definitely see this being used in cocktail recipes with alcohol) then it’s definitely worth a try.

Spearmint was always growing in our garden as I grew up – but we rarely made it into tea. Nowadays, I’m loving the minty vibes in my tea. It works particularly well with the warmth of Chinese green teas. If you liked the sound of Zest Tea Pomegranate Mojito, you’ll also like my reviews of: