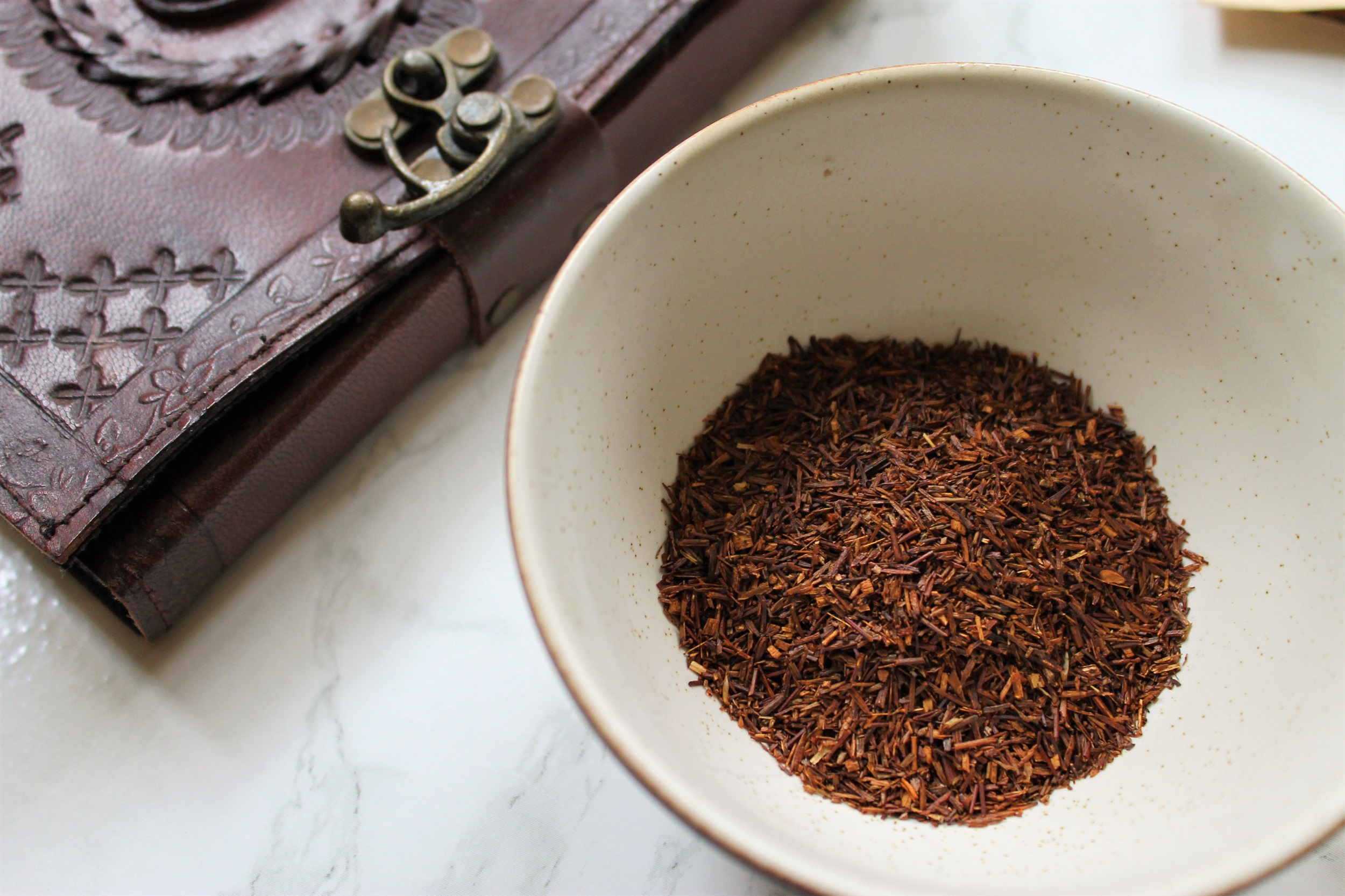 Red bush tea was one of those uncommon tea types that I was a little nervous to try at first, but once I’d had my first cup, I loved it. So, if you’re worried or just curious about red bush tea, you’ve got some great surprises in store.

Overall, red bush is a forgiving tea to brew and there are plenty of blends made with it, to add additional flavours. My advice? Take the plunge and try red bush tea. Even if you don’t like it, red bush isn’t a super strong or repugnant flavour. It’s gentle and delicious.

Anyway, let’s get on with my guide!

Red bush is an herbal tea from South Africa, also commonly known as rooibos. It looks like small red pine needles and it’s available as both loose leaf and teabags around the UK. It has a smooth, rich and nutty flavour that’s a great caffeine-free substitute for black tea.

All About Rooibos Tea

If you’re hungry for more about the origins of rooibos tea, I recommend reading ‘Steeped in History’ by Sarah Fleming Ives. It’s not light reading, but it is really important. South African rooibos is a delicious, valuable and indigenous plant, but its history is full of struggles, from politics to racism.

It’s really worth a read and it puts into perspective why responsibly and ethically sourcing red bush tea is so important.

But back to the biology of rooibos (pronounced like roy-boss).

It’s a plant from the legume family, but it’s the leaves that are used to make tea. It grows in South Africa where it’s been consumed as tea for generations, and it’s been popular in Europe for the past 20 years.

It doesn’t contain caffeine, but it still has an earthy, tea-like flavour, so it’s really popular as a caffeine-free tea with people who don’t like herby teas. I personally like to drink it in the evenings when I’m craving a hearty black tea, but it’s too close to bed-time to consume caffeine.

Wikipedia describes it as earthy and close to yerba mate or tobacco. But in my experience, it’s nutty and sweet. Sometimes there’s even a hint of malt about it. I dislike earthy and mineral flavours, so I have no idea who edited the Wiki page to say that!

It’s lighter than black tea and sweeter. Sometimes there’s a slight medicinal note, but rarely. Technically, you could drink this tea with milk, but I don’t recommend it.

Anyway, red bush rooibos is an excellent base for tea blends.

Rooibos goes really well with sweet flavours, like vanilla and almond. But you can also freshen it up with mint and chocolate, for example. It’s quite versatile but most tea brands prefer to use it for dessert tea blends.

Adagio Rooibos Vanilla Chai – I reviewed this tea on the blog back in November 2019 and it’s worth revisiting. Honey, nuts and vanilla swirl into a really satisfying lightly spiced chai.

Teapro Lemon Rooibos – this is a really simple blend, lemon and rooibos. Like a lemon drizzle cake, it’s the simplicity that makes it taste so good. You can recreate this at home by buying Teapro rooibos and adding a squeeze of lemon.

Whittard Blueberry Rooibos – the combination of blueberries and rooibos tastes almost exactly like freshly baked blueberry muffins. This is a really clever blend that adds fruit to the already-sweet rooibos without making it overpowering. Check it out on Whittard’s official website.

Twinings Golden Caramel Rooibos – just the name of this tea indicates at what a real treat this is. I haven’t tried it myself yet, but it’s high on my wish list. You can find it directly on Twinings’ official website.

TEA REX Fresh Rooibos and Blood Orange Infusion – I love that these ingredients are ethically sourced, and this is a new business that I’m supporting. TEA REX are selling this citrusy sweet rooibos infusion through their store on Not On The High Street.

Most of the time, a specific extract from the tea or a very highly concentrated version of it produces the best results. Drinking a few cups of it from day to day is less likely to result in miraculous health benefits.

So, my advice? Just enjoy rooibos tea (red bush) for what it is. Don’t worry about the rest.

This benefit stems from a commercial trial, not a scientific study, so that does call the results into question a bit. But nonetheless, some participants in this trail found that rooibos resulted in better hair textures and reduced hair loss. Of course, the most effective way to get this benefit is to apply rooibos topically to your hair, rather than drinking it as tea.

According to Cape Peninsula University of Technology, the antioxidants in rooibos tea could do more than just help your cardiovascular health. They believe that rooibos may be the key to improving liver function as well. Good news!

The Rooibos Council (so maybe they’re a little biased) have found that rooibos tea could control and treat type 2 diabetes when it’s consumed with a healthy diet and active lifestyle. Furthermore, they believe that drinking a cosy cup of red bush could reduce the risk of experiencing the side-effects that often come with traditional pharmacological treatments.

Too busy to read my full guide? No problem. Check out these frequently asked questions about red bush rooibos tea types.

What is red bush tea good for?

Drinking! As for health benefits, red bush tea is great for your heart health and reducing inflammation.

Do you drink red bush tea with milk?

You can, but it’s not my preference. Rooibos has quite a sweet, soft flavour that I prefer to drink without anything added.

What can you mix with rooibos tea?

No, red bush tea doesn’t come from the Camellia sinensis plant and doesn’t contain any caffeine. It’s classed as an herbal tea.

How much rooibos tea should I drink a day?

However much you like. I recommend 2 to 3 cups of tea per day, a mix of caffeinated and herbal teas. Rooibos is a caffeine-free tea, so you don’t need to worry about consuming too much caffeine from it.

Does rooibos tea make you sleepy?

No, not in my experience. But it won’t keep you awake either, as there’s no caffeine contained in it.