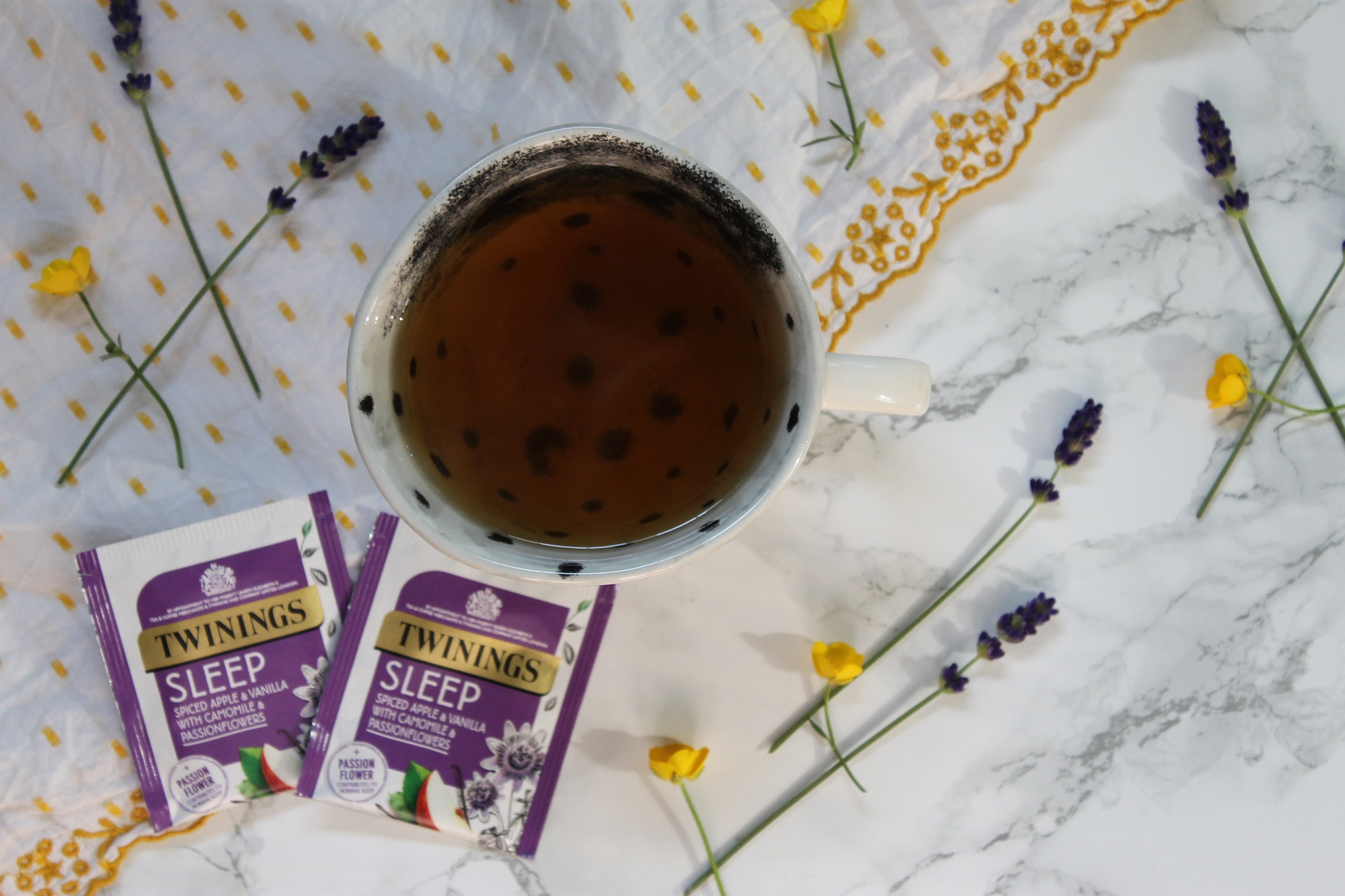 This simple sleep aid, Twinings Sleep Tea, promises to deliver a smooth and gentle drift off to sleep, all you’ve got to do is ‘enjoy this sleep blend as a delicious part of your bedtime routine.’

I’ve tried numerous sleep teas in the past, several of which have been reviewed at Immortal Wordsmith (check the sleep aid tag) and I know that they can be really hit and miss. Like many teas, this one focuses ingredients around chamomile and passionflower, two ingredients that have been scientifically proven to aid sleep in some way.

But does it taste good? And does it actually work? Find out in my Twinings Sleep Tea review below.

Twinings Sleep Tea at a Glance

The aroma of this tea is fantastic and incredibly sweet, like an apple turnover. But when you take a sip, it’s smooth and mellow with a gentle chamomile caress. It’s perfect for settling down in the evening. 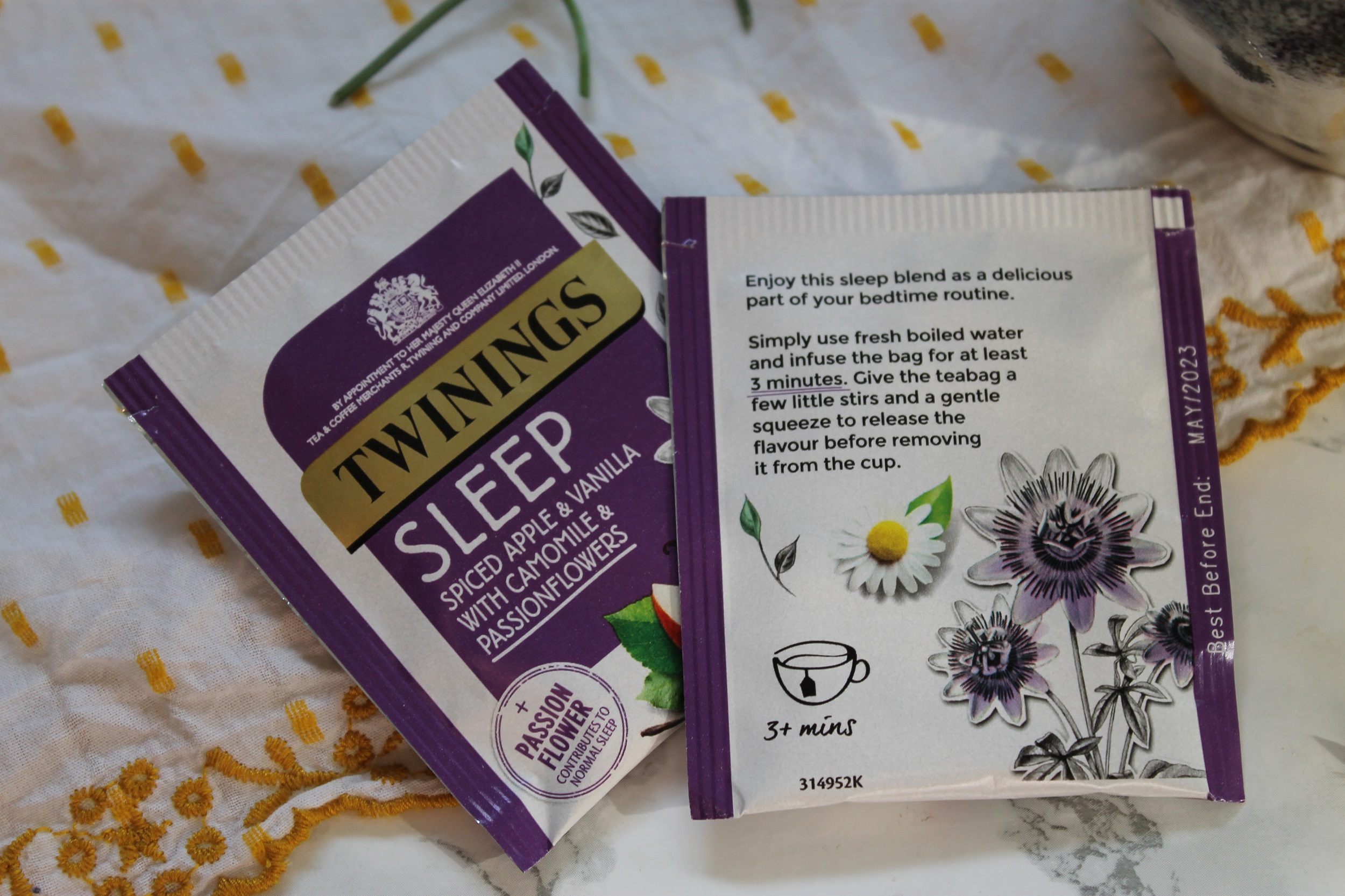 This tea is unusual! Usually, you expect a mellow and smooth aroma from the start, but actually, the aroma from this dried tea is intense. It reminds me of Christmas spiced apple juice, or mulled cider, with notes of cloves and cinnamon with strong apple sweetness.

Twinings Sleep Tea brews into a dark burnt chamomile yellow colour, with a sweeter aroma. It’s incredibly sweet! The apple loses any hint of tartness and the chamomile finally makes an appearance with rich, buttery hay notes. Together, it reminds me of an apple turnover.

Surprise! The flavour is completely different. Rather than tasting like strong apple juice, it has a softer and mellow flavour. It’s like tasting the tougher part of the apple core and the chamomile creates a blanket that wraps around it – think of eating apples in a flower-filled meadow under the warm spring sun.

I really enjoyed how mellow this tea was in the end. It’s sweet but not at all overpowering, which is exactly what you want before you go to bed. The spices develop towards the end of the cup, lingering in the aftertaste. 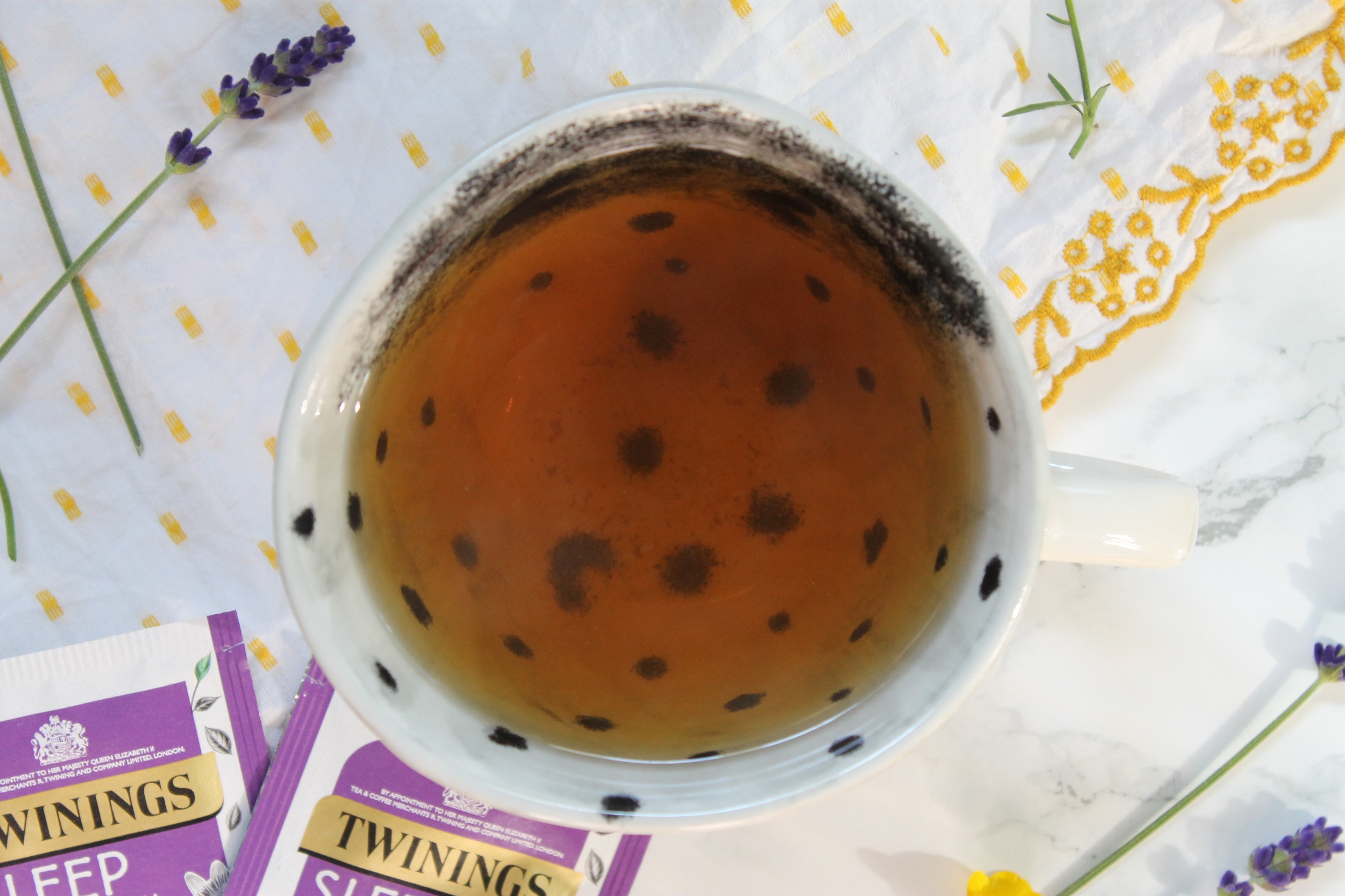 How to Brew Twinings Sleep Teabags

Twinings Sleep Tea instructions are simple – pop the teabag in a mug and pour over freshly boiled water. Let it brew for 3 minutes, then stir and squeeze the teabag gently to ease out any water soaked into it.

Now, usually you’d want to avoid squeezing teabags. Although I’ve not seen a specific study or science-based evidence, it’s commonly known in the tea community that squeezing teabags at the end (also known as mashing) releases too many tannins and makes the tea bitter.

Of course, for reviewing purposes I timed my cup to 3 minutes exactly. The flavour was mild, which is perfect for a sleep tea in my opinion.

Twinings make decent teabags, although they’re not exactly amazing. I’d say they’re a step above supermarket own brand, but not as good as more loose leaf focused brands, e.g., Whittard of Chelsea or BRUU.

The ingredients in this tea are good, although there’s also a lot of flavouring in this tea. The main ingredients are apple, chamomile, and passionflower. Apple doesn’t have many links to improved sleep, however chamomile is traditionally used to reduce anxiety and induce sleep – it has sedative properties. 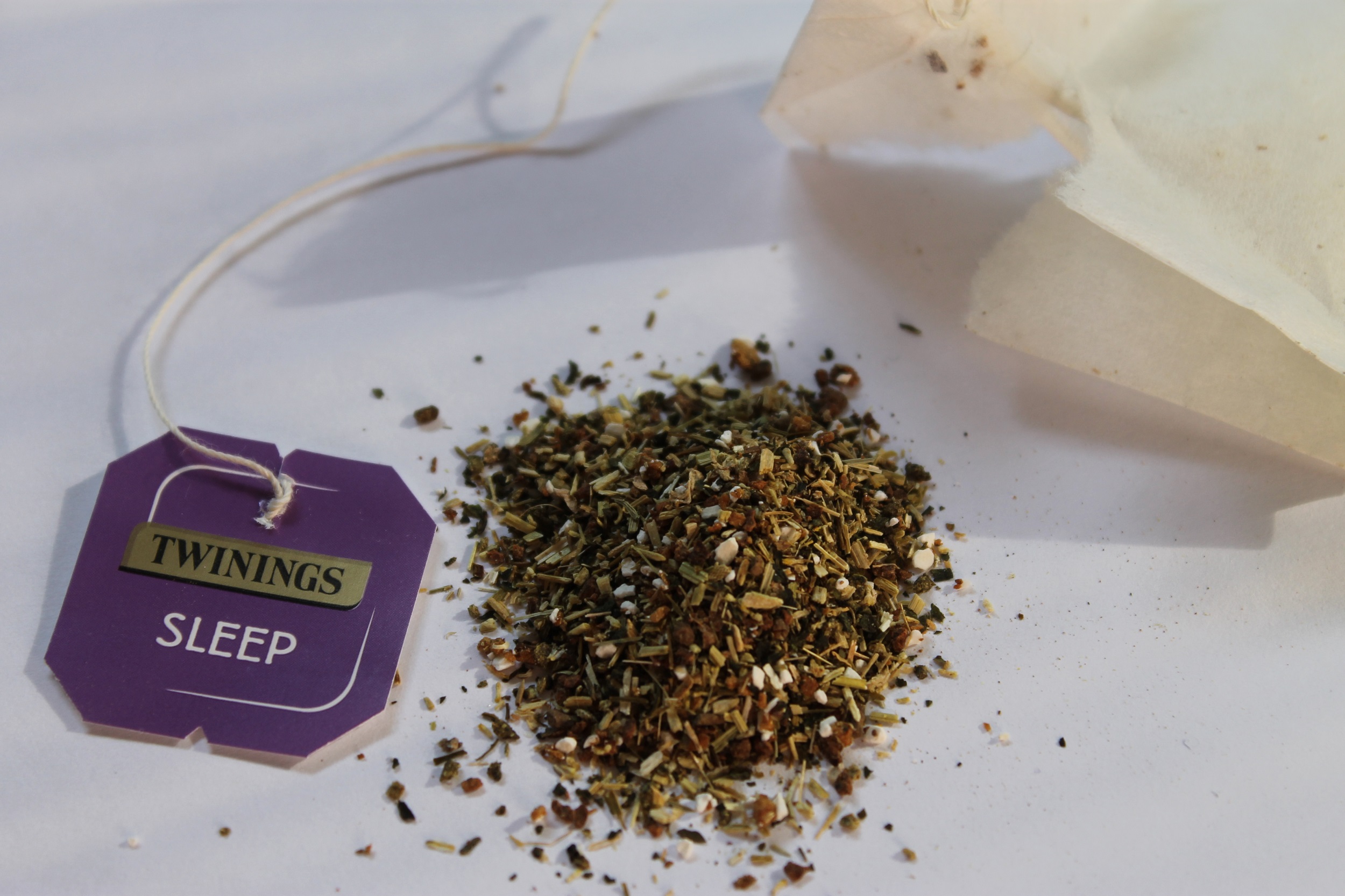 Passionflower is also a great ingredient for a sleep tea. It is linked to improved sleep quality (although subjective) in some placebo-controlled investigations.

Overall, the quality is good and the ingredients are proven to help you sleep.

This is a decent sleep tea with a great sweet flavour and ingredients that are designed to improve sleep quality as well as induce sleep. Twinings is also pretty affordable and is in-line with Pukka, although you can brew this one in 3 minutes rather than 15!

If you’re in the UK, you can buy this tea directly from Twinings. For international buyers, you might find a better shipping option from Amazon (see the link above).

Buy This Tea from Twinings 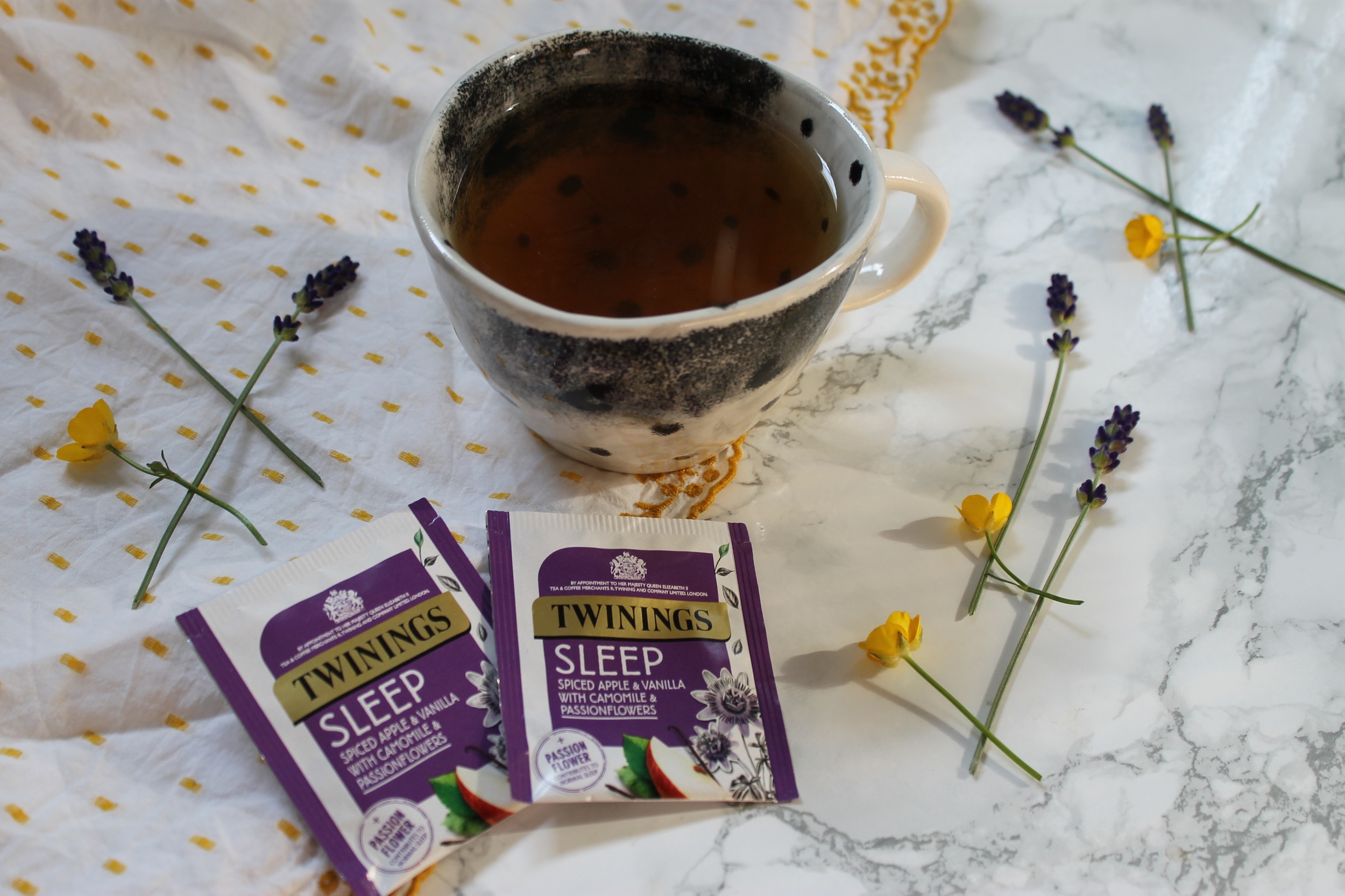 If you want a sweet and fruity tea but with more of a caffeine hit, then you can find plenty of teas that I’ve reviewed at Immortal Wordsmith. Today, I’m recommending you check out Pure Leaf Black Tea with Berries. It’s one of the few fruit-flavoured teas that actually tastes quite nice with a splash of milk!