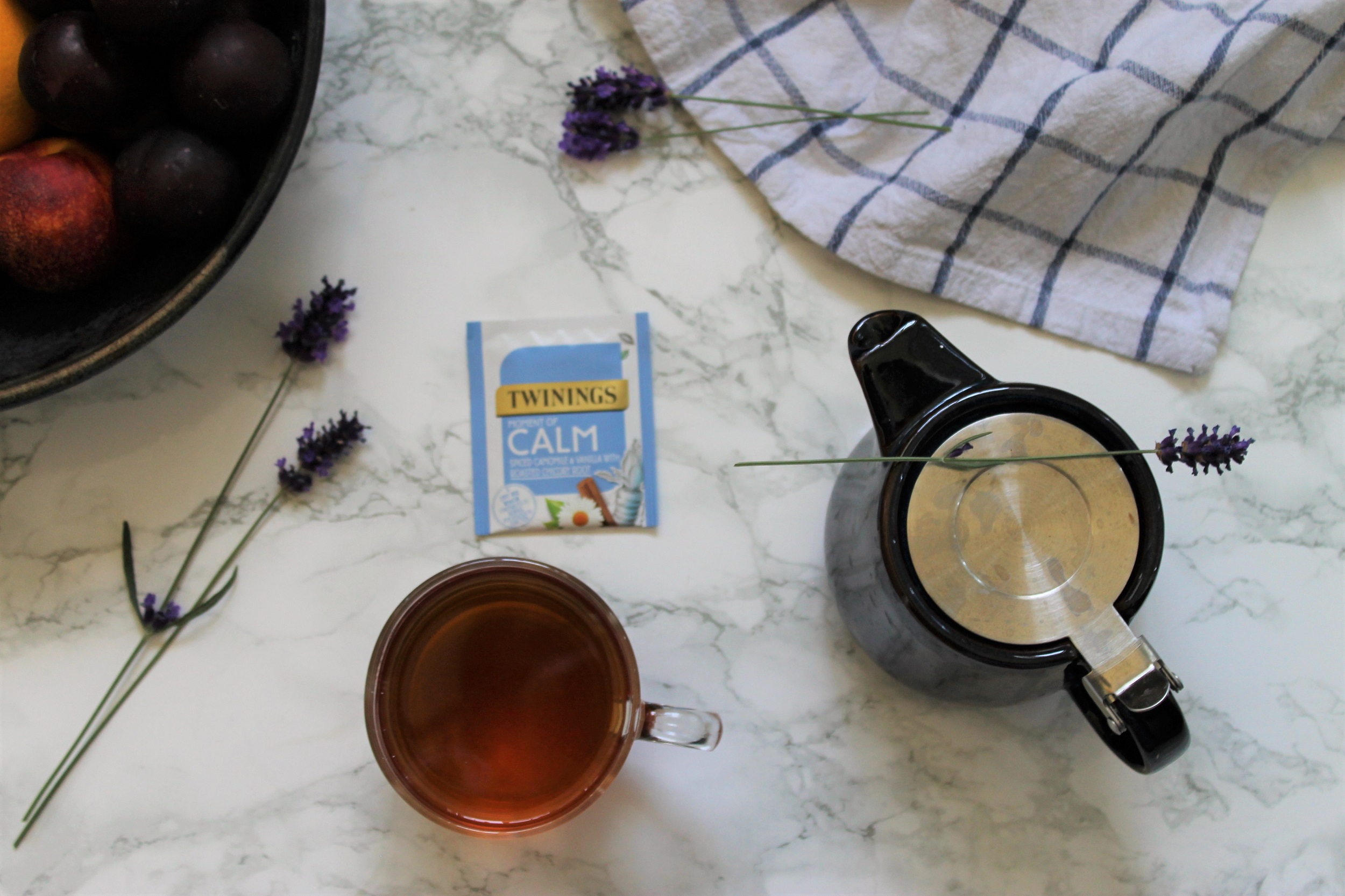 They reckon that tomorrow will be the hottest day of the year, and yet here I am, drinking a hot cup of Twinings Moment of Calm. This is possibly the worst tea to drink at this time of year – and you’ll need to read my full review below to find out why.

I received this simple single-wrapped teabag earlier in the year and have been eager to try it out. I do get the occasional bout of anxiety, so I was really hoping that drinking this tea (and the ritual of making it) would be a calming experience.

But it didn’t quite go to plan.

Twinings Superblends Moment of Calm Tea at a Glance

The richness of the chicory is hard to ignore – that’s why roasted chicory root is a brilliant coffee alternative. However, with the sweetness of the chamomile/apple and the cinnamon, this because almost like an herbal chai. It’s pleasant, but not at all “calming” like the name suggests. Worse still, it is only appetising from October through February! 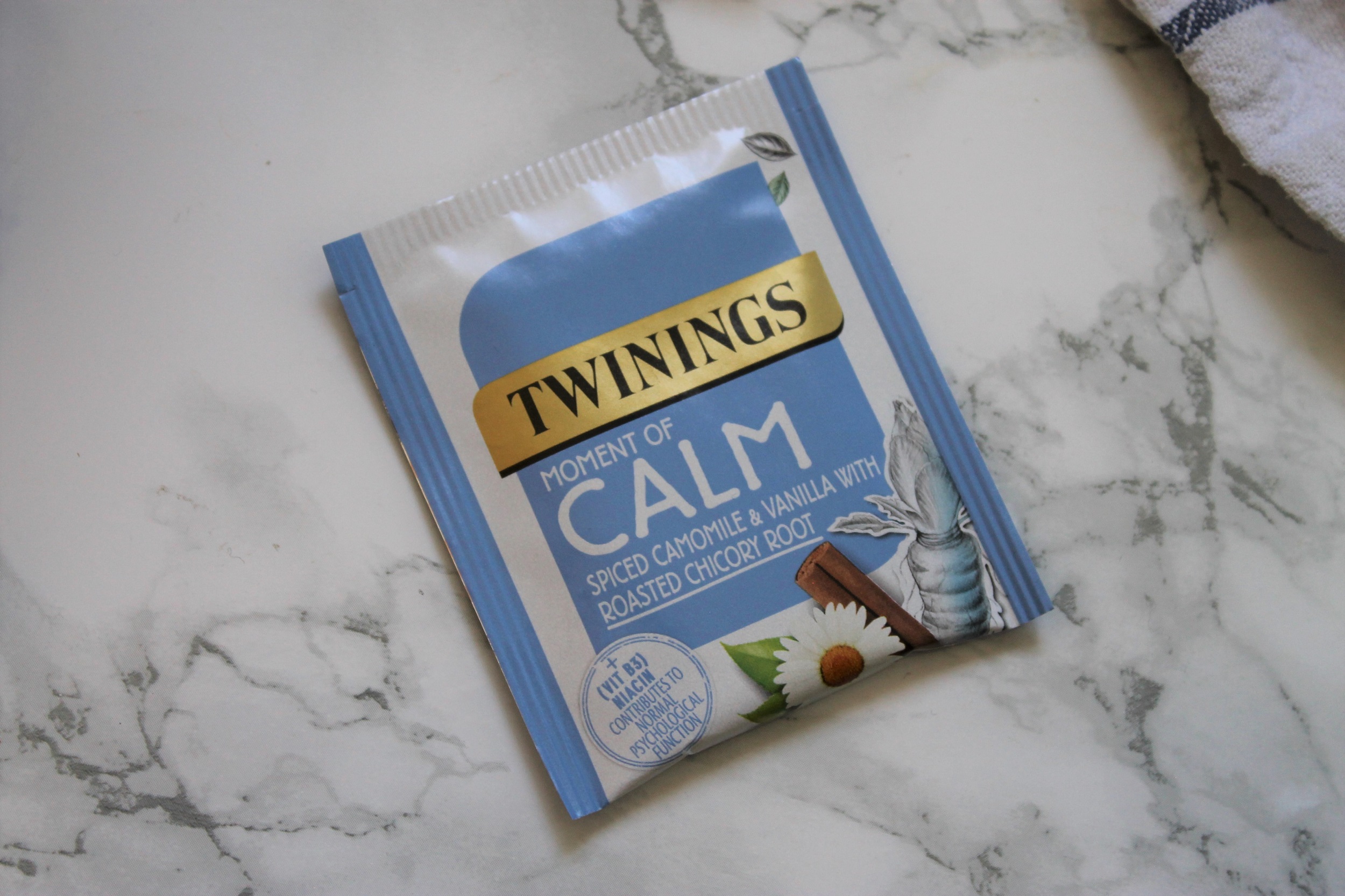 The aroma coming from the dried teabag is super intense. It’s sweet, like a mix of stone fruits, chamomile and apple, but there’s also something earthy about it. The chicory adds an element that’s almost like raw cacao. The spices are hard to ignore too – cinnamon always makes it feel like Christmas.

Once brewed, it develops into a dusty dark apple juice colour. The aroma is thickly spiced with sweet apple and chamomile. So far, it’s not at all calming. It’s certainly cosy and vibrant, but I don’t feel soothed in the slightest.

The flavour is just what you’d expect. It’s a lightly spiced chamomile tea with generic herby notes and a touch of sweetness.

Don’t get me wrong, it’s a nice flavour. Just not calming. It would be perfect to sip on Christmas eve to compliment that excited festive feeling. I could brew a flask to take with me for gift shopping.

I suppose it could be interpreted as calming in the winter months. But for mid-July, it’s just wrong and I think that’s a huge oversight from Twinings. 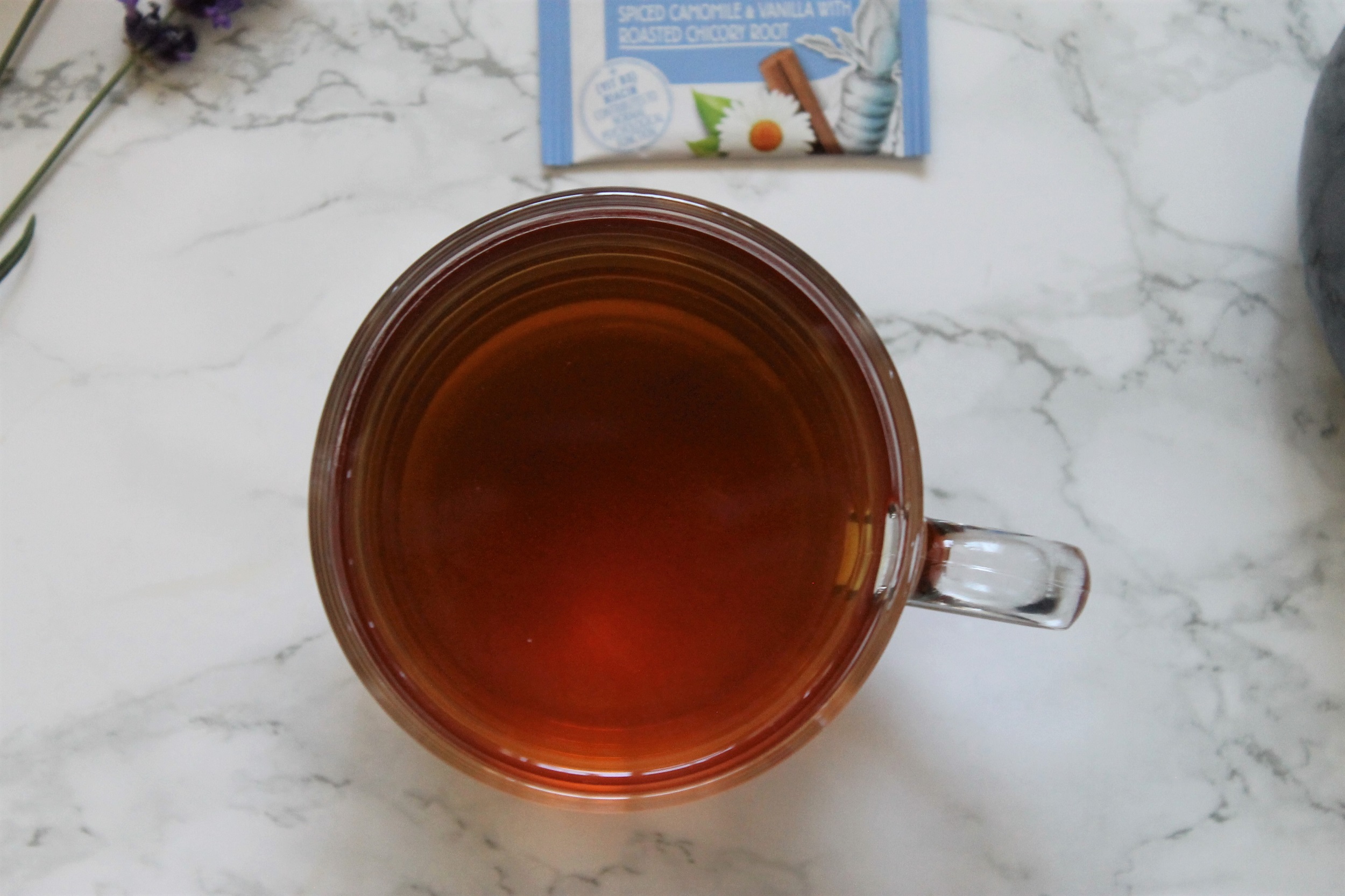 How to Brew Twinings Not-So-Calming Tea

This is an herbal blend, so go ahead and use boiling water. Pour the water directly over your teabag into the mug and let it steep for 3 minutes. You can brew for up to 5 minutes if you want a stronger flavour – the aroma leads you to believe that this tea will be very strong, but it’s actually fairly mild.

One teabag is just right for 250ml or a normal sized mug. Use more if you’re brewing a whole pot.

This tea is sweet enough without additional sweetener, but I think the richness of honey will go nicely if you really crave that sugar hit. The blend as a whole is well-rounded and doesn’t need to be accompanied by additional flavours or foods to satisfy you.

I enjoy some of Twinings’ blends immensely, especially their herbal range. I like that they use natural flavourings but mostly stick to real dried ingredients. Of course, the quality isn’t amazing – they are primarily a supermarket brand, after all. You can see that the ingredients are quite finely chopped in my photos, and it has no organic or Fairtrade certifications. 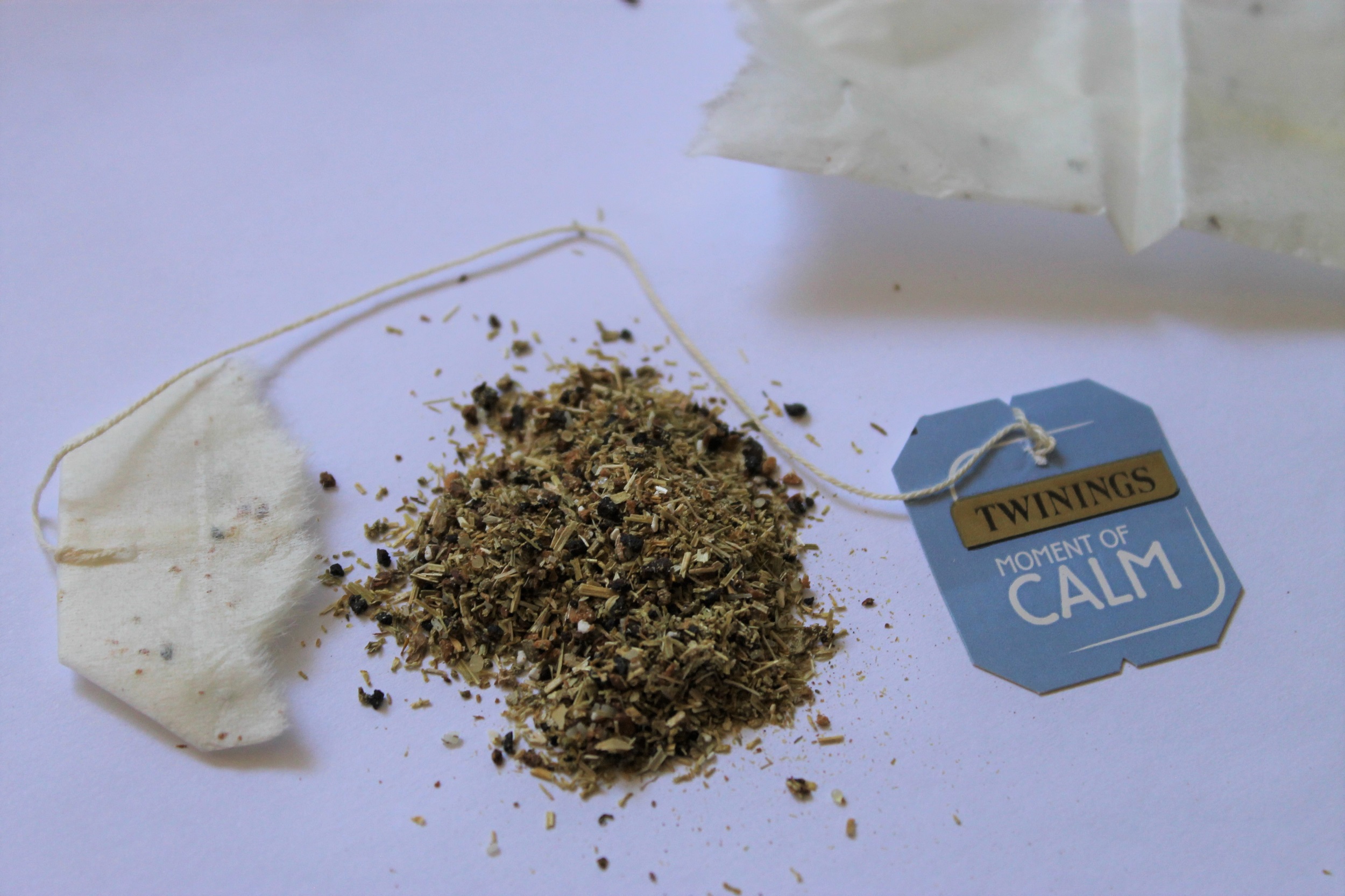 This blend was designed to calm you down. Despite some calming ingredients – namely chamomile which has known sedative properties – Twinings haven’t really added anything to reduce anxiety, stress, or excess energy.

Valerian, mint, lemon… these are the ingredients I usually associate with calmness. Cinnamon, cardamom and chicory root are more often used in indulgent sweet teas.

Nonetheless, there is a small amount of niacin in this tea which contributes vitamin B3. This vitamin is great for maintaining normal psychological function, but not necessarily calmness. In fact, it’s more often used in beauty supplements as it’s supposedly great for your skin.

Overall, the ingredients make me feel cosy (in the winter), rather than calm in all seasons.

Overall, this tea was a good drinking experience, and I wouldn’t say no to it on a cold November evening. But it’s not a suitable calming or anti-anxiety tea overall because the ingredients are just far too festive.

Of course, this does come down to my personal tastes and preferences… so why not try this tea for yourself? Buy it directly from Twinings or find it on Amazon UK with the link above.

Buy This Tea from Twinings 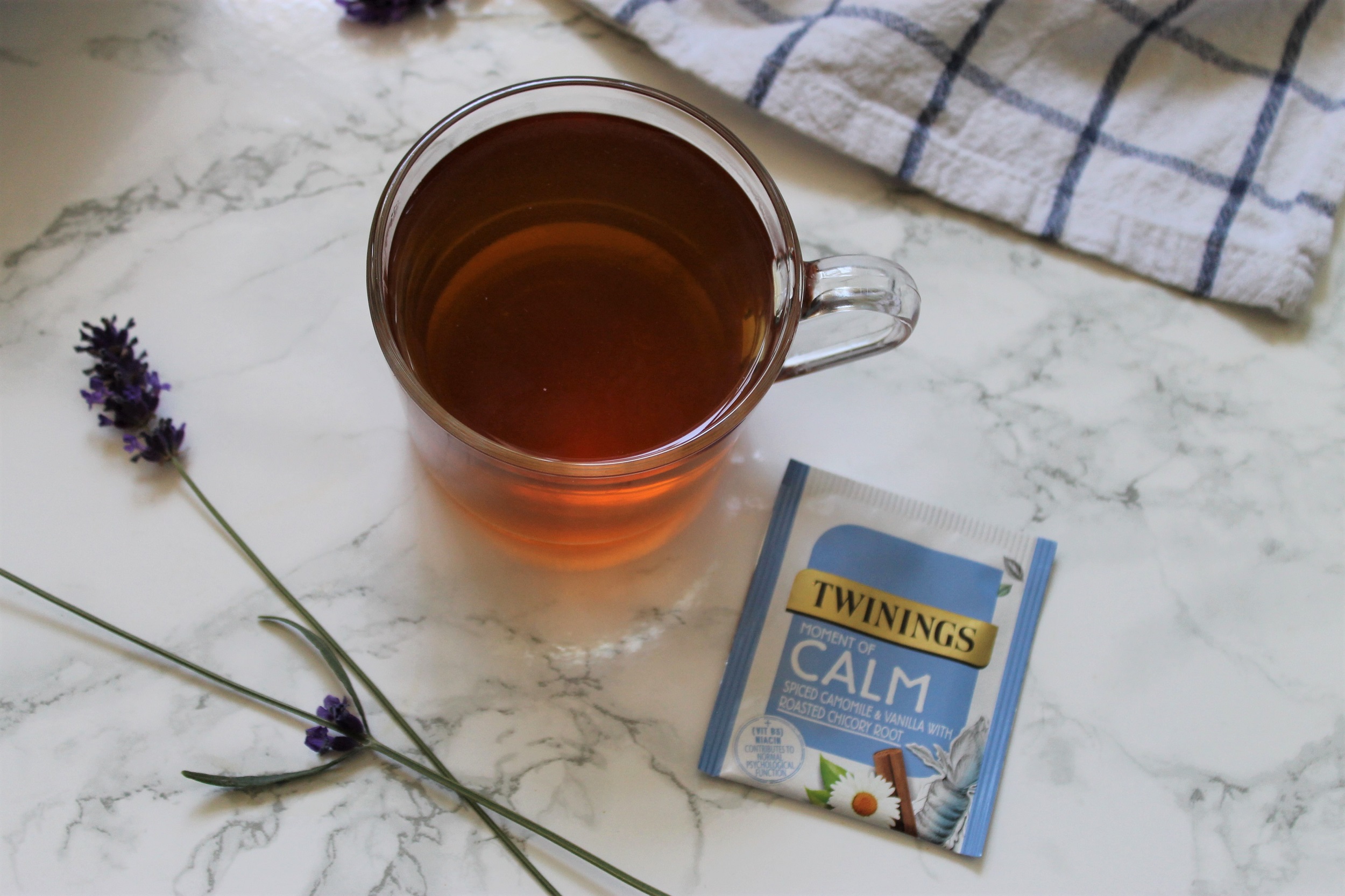 Whenever I sip a really cosy tea like Twinings Moment of Calm, I love using these cute emoji face cat mugs. They’re so adorable! We currently have them in stock in the Immortal Wordsmith shop, with free delivery across the UK.