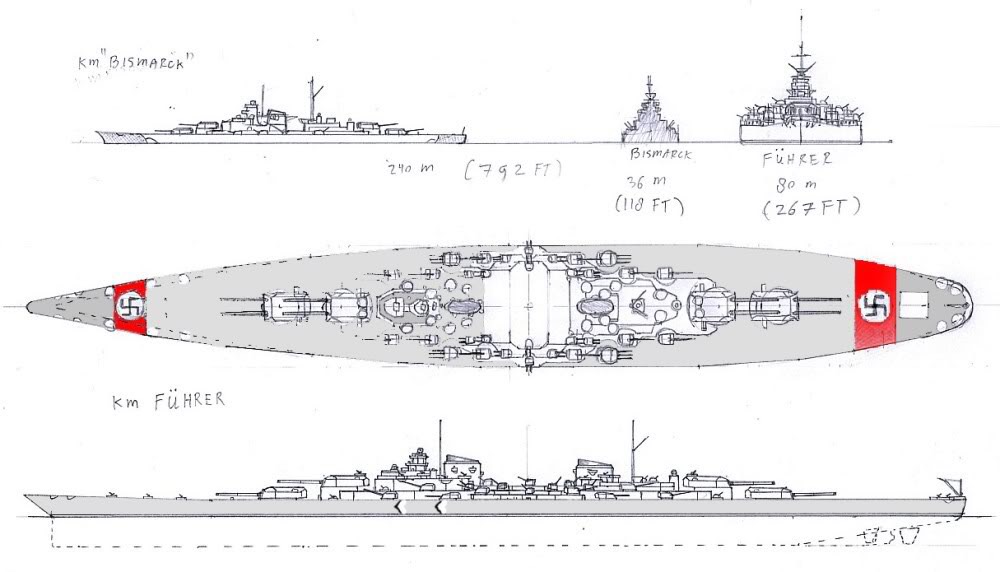 Some ships never make it further than the drawing board, sometimes a design is drawn and then ultimately the plan is shelved due to political manoeuvring or cost considerations. Some of these ships are cutting edge on paper but the entire design unrealised.

Here are my top 5 vessels which never were, as well as a little bit of insight into whether (or not) they would have changed the course of history if they had gone beyond the planning phase.

Following on from the abandoned 1975 Soviet project 1153 Orel, the Ulyanovsk was to be a slightly larger design that encompassed all the key elements of operational American carriers we see today. Although the Ulyanovsk was to be slightly smaller than their American counterparts, they could have been every part as formidable. This would have been the first Soviet carrier to have catapults and arresting wires, something only two nations operate today (France and the United States). I highly recommend checking out this book about the influence of aircraft carriers on world events, if you’re interested in the history!

Ulyanovsk’s hull shape would have been a hybrid of what we see in today’s carriers combined with the front end of the Admiral Kuznetsov. Her upward ski jump facing forward and two catapults on the angled deck. Ulyanovsk was a missed opportunity, with two ships planned, both designed to be nuclear powered rather than being powered by oil fired boilers like the ship that replaced her.

Ulyanovsk’s undoing was she came too late and in 1991 the Soviet Union collapsed with all funding cancelled. Her unfinished hulk was cut up for scrap (she was 20% complete at the time of the Soviet Union collapse), and she could have propelled Soviet naval power in a new direction, unfortunately this is something we will never know. Curiously her design has not gone away and is now a concept known as Project 23000E Shtorm, this though is another carrier I personally think wont make it off the drawing board.

Fun Fact: Although there are quite a few Soviet plans for aircraft carriers the reality is the Soviet/Russian navy does not see a major requirement for them, and thus for political reasons they are deemed TAKR which means heavy aviation cruisers. In terms of weapons carried without factoring in the airwing, the Admiral Kuznetsov is the most weapon powerful “aircraft carrier” in the world due to her Anti ship missiles.

Designed in the 1960’s to replace the venerable Ark Royal and other large carriers of the fleet. The CVA-01 would have been a very large vessel indeed, at 282 meters long and 56 meters wide and 63,000 tons they would have been second in size only to the American Super Carriers (at that time under construction).

The carriers were designed to operate a mixture of helicopters and fixed wing fast jets such as the legendary F4 phantom as well as the highly successful strike fighter the Buccaneer. For this the carrier would require catapults and initially the designs called for four to be placed on the ship, though, further into development this was reduced to two because it reduced costs to £53 million per ship.

The CVA-01 would have been the largest vessel ever built by the Royal Navy and would have maintained their standing in Europe, however with the winding down of the British economy a defence white paper issued in 1966 cancelled the entire project, along with the proposed type 82 destroyers (HMS Bristol was the only one built and remains in Portsmouth).

In the end, amid naval budget cuts, the Ark Royal and Eagle would be left to soldier on. In 1979 Ark Royal, the final large carrier of the fleet would be decommissioned. The motto of the Ark Royal rang true “Desire does not rest like a phoenix” when her name would re-appear six years later. The 22,000-ton Invincible class would not be armed with catapults and arresting gear but a ski-jump for the new Harrier jump jets and the last of the trio would be named Ark Royal.

Although the “Harrier Carriers” as they were dubbed would provide sterling service during the Falklands war and the Gulf war, they lacked the capability and flexibility of the large super carriers. One officer who worked on the CVA-01 project stated that had the UK built two or three of these vessels they would now (in 1999) be seen as the bargain of the century.

The CVA-01 concept didn’t go away. As of the 28th August 2014, for the first time in nearly a century, the Royal Navy is without a ship that can handle fixed wing aircraft (although the Harrier was scrapped in 2010). Preparations are well under way for their replacement and a return to large carrier operations.

There is a now infamous story of what happened to the two legendary German battleships of World War Two Bismarck and Tirpitz; but what if I told you that these two monsters would pale in comparison to their planned future successors?

In design the H-44 was a monster that would outclass even the most heavily armed battleship built, the Yamato. She would have a displacement more than twice that of the earlier Bismarck and her guns would have been the largest ever fitted to any warship in the world (with the exception of the proposed Japanese A-150).

The H-44 would have been a ship of epic proportions at 345 meters long (3 metres longer than the USS Enterprise CVN-65) and displacing a staggering 131,000 tons (31,000 tons more than the current Nimitz class aircraft carriers).

These ships, if built, would have been a total game changer. There was nothing in the United States or Great Britain that could match or out class this design (even taking into consideration the cancelled Lion class). The mighty Iowas and the last battleship ever built, the Vanguard, would have been little more than bath toys in size comparison to the leviathan that would have been the H-44.

The H-44 would have been armed with eight 20 inch guns (the Yamato holds the world record for largest diameter gun barrels at 18.1 inch). That may not sound big, but this would have been a massive step up from the 2,000 lb 16 inch shells of the United States Navy and Royal Navy. A 20 inch shell could easily have weighed in excess of 3,000 lbs and would have likely hit high supersonic maybe almost hypersonic speeds.

Although never built they are an awe-inspiring vessel and a great exercise in understanding the ambition of Nazi Germany. It would most certainly have posed many questions of the allied forces. These questions (thankfully) will remain unanswered.

Fun Fact: In 1942, Albert Speer was put in charge of armaments and munitions for H-44. Upon looking at the project, he realised it was unworkable and re-assigned many of the staff to work on U-boats instead. The designs required a completely restructured build process from using traditional slip ways and would have cost an exorbitant amount of money.

Here is one concept ship that will completely blow your socks off, a vessel made of wood pulp and ice. Yep, you read that correctly, I did say ice!

Theorised by Geoffrey Pyke during World War II and using the building methods of north Canadian Inuit tribes, the idea was to create a large self propelled, naturally floating, mid Atlantic air strip. The concept wasn’t new; in fact, it was a German scientist in 1930, Dr Albert Gerke who first came up with the idea.

The idea was to close the mid Atlantic air gap that was plaguing the British Convoys due to the U-boat attacks there. The plan was greeted by the concerned parties of the admiralty as a joke although there is evidence that Churchill did take the proposal seriously.

“Pykrete” as it became known could be made from wood and ice, then cut into shapes much like steel. It would float longer than normal ice and critically take longer to melt.

Despite some initial problems, large scale models were tested in Lake Louise, Alberta, Canada  with models being kept in shape by a one horse power motor that chilled the ice. The largest model constructed was a 1,000 ton piece.

The Project was killed off by rapidly rising costs and the introduction of long-range patrol aircraft with escort carriers patrolling the air gap. The design was slated to be ready by 1944 but due to difficulties the war would ultimately be over before any vessel could be constructed.

These ships for me, like the Iowa class, are probably the best-looking battleships ever created. I am a big fan of the Iowas and should the Montanas have been built they would likely be a new favourite.

Originally five were planned and they were to be super versions of the now legendary Iowas; though designed to be slower than the Iowas, they would pack a bigger punch with an extra aft turret and 3 extra 16 inch guns.

At 921 feet long they were 34 feet longer than the Iowas and displacing an impressive 71,000 tons the Montana class would have been the largest battleships ever built in the Untied States Navy. They were authorised and orders were placed, but the ship’s construction was slowed to speed up the current in build Iowas and Essex class carriers. In an ironic twist, the aircraft carrier would eclipse the capital ship she was being built alongside.

In 1942, two key battles took place, the first at Coral sea and the second the Battle of Midway; these were the first true carrier vs carrier actions to take place. In these battles (predominantly Midway) neither side came into visual contact (ship to ship) and the entire battle was conducted by aircraft flying from aircraft carriers (and some from land bases also).

With the outcome of both battles being so decisive, it was decided to cancel the Montanas in favour of the now famous Essex class carriers. HMS Vanguard became the last battleship ever commissioned by a navy it was clear the day of the big gun battleship was over just as they had reached the zenith of their power.

Fun Fact: Montana is the only state of the then 48 states of America not to have a battleship with BB designation named in her honour. Today, the United States Navy has named one of its Virginia class submarines USS Montana SSN-794, presently under construction at the Newport News shipyard, due for commission in May 2020.

My Top 5 Pre-World War One Battleships