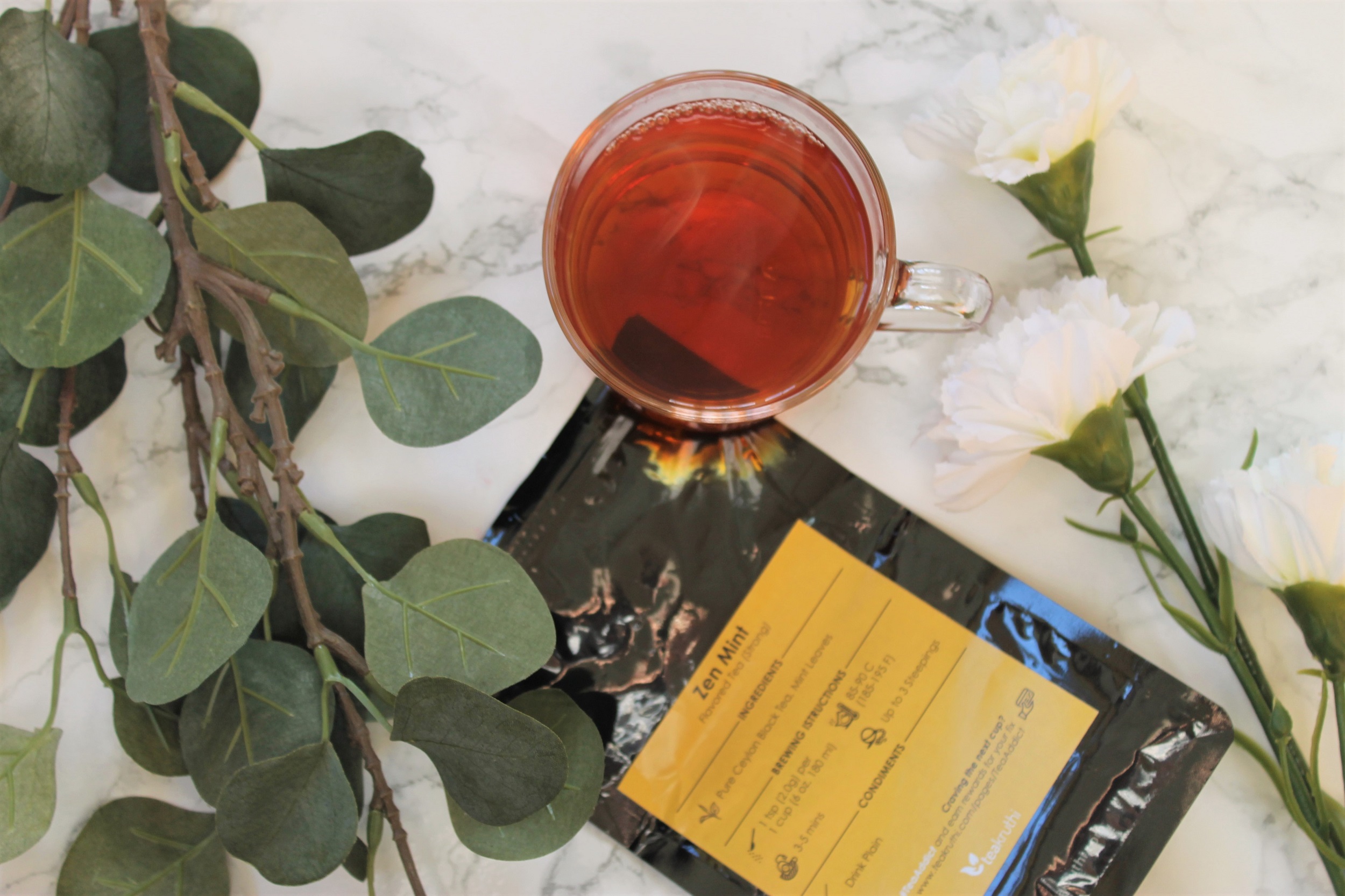 Mint black teas sometimes confuse me. The mint is ultra-refreshing and bright, while the black tea is hearty and warming. Yet together, they can work really well! Just think of After Eight chocolates, where the richness of the chocolate works so well with the sweetness of the mint.

Teakruthi Zen Mint is one of the best mint black teas I’ve ever tried. It’s so perfectly balanced. Find out exactly how it tastes, how best to brew it, and where you can buy it in my full tea review below.

Surprisingly low on menthol, this sweet black tea has lovely minty notes that swirl nicely amongst the malty fullness of the Ceylon tea base. 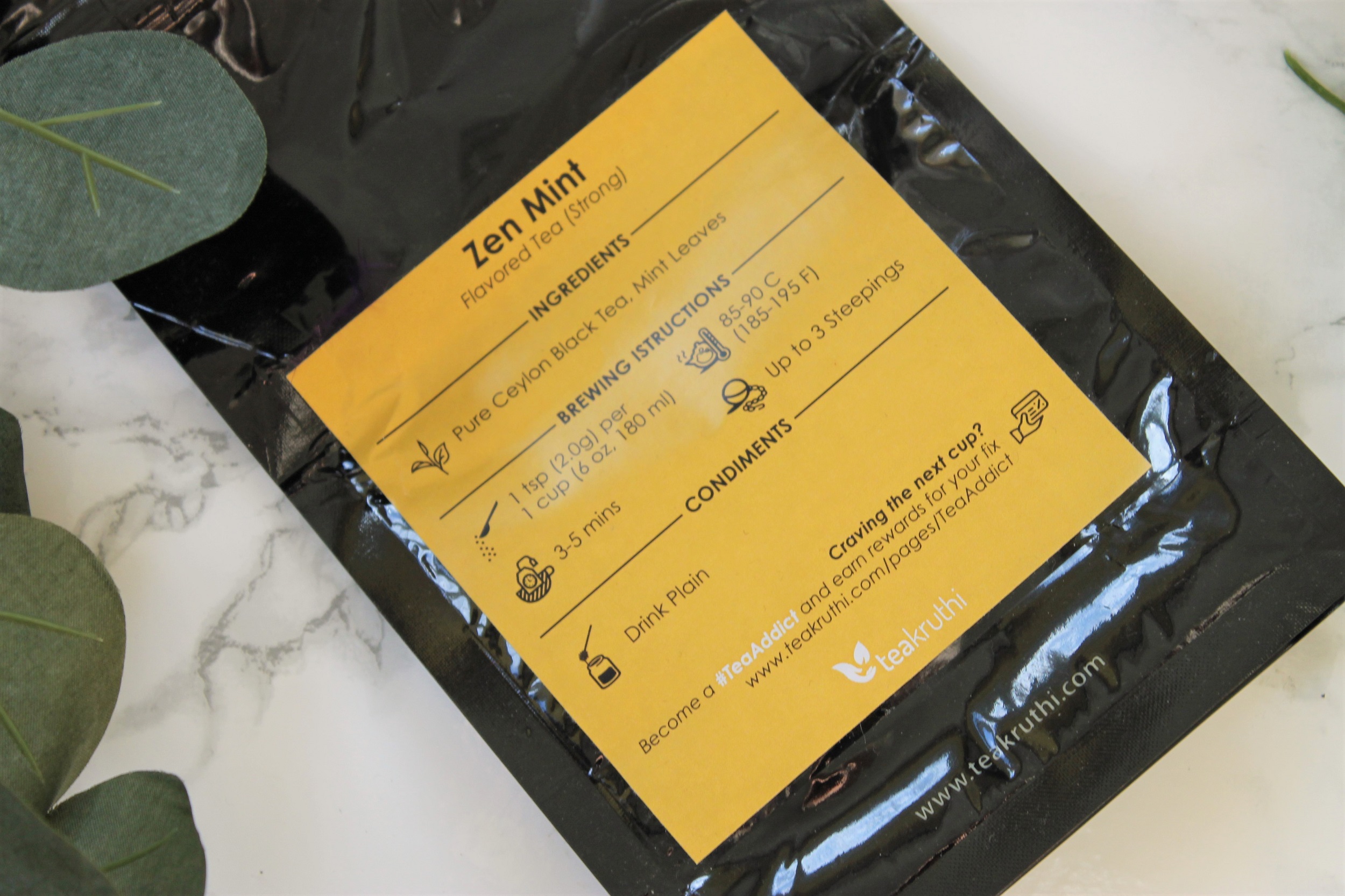 Opening the resealable packet, the mint is undeniable! It’s super sweet and sugary, just like a candy cane. I really like that flavour, but if you were after something natural and wholesome you might be disappointed at first. But hold on. We will get there.

It brews into a very light honey brown coloured tea. Don’t be tempted to brew for too long – it won’t get darker. This tea is designed to be consumed without milk.

Now the aroma is better balanced. The peppermint (which is fresher, rather than sweeter) goes well with the black tea base notes.

And the flavour matches. It’s very smooth and only slightly sweet, with maltiness from the black tea and a subtle minty note coming in at the end. The menthol is hardly noticeable, so you don’t get that cooling effect in your mouth, nose and throat. In fact, it’s actually quite silky and thick in texture rather than watery and cold.

Overall, it’s extremely pleasant and gentle rather than bright and minty. I like that. 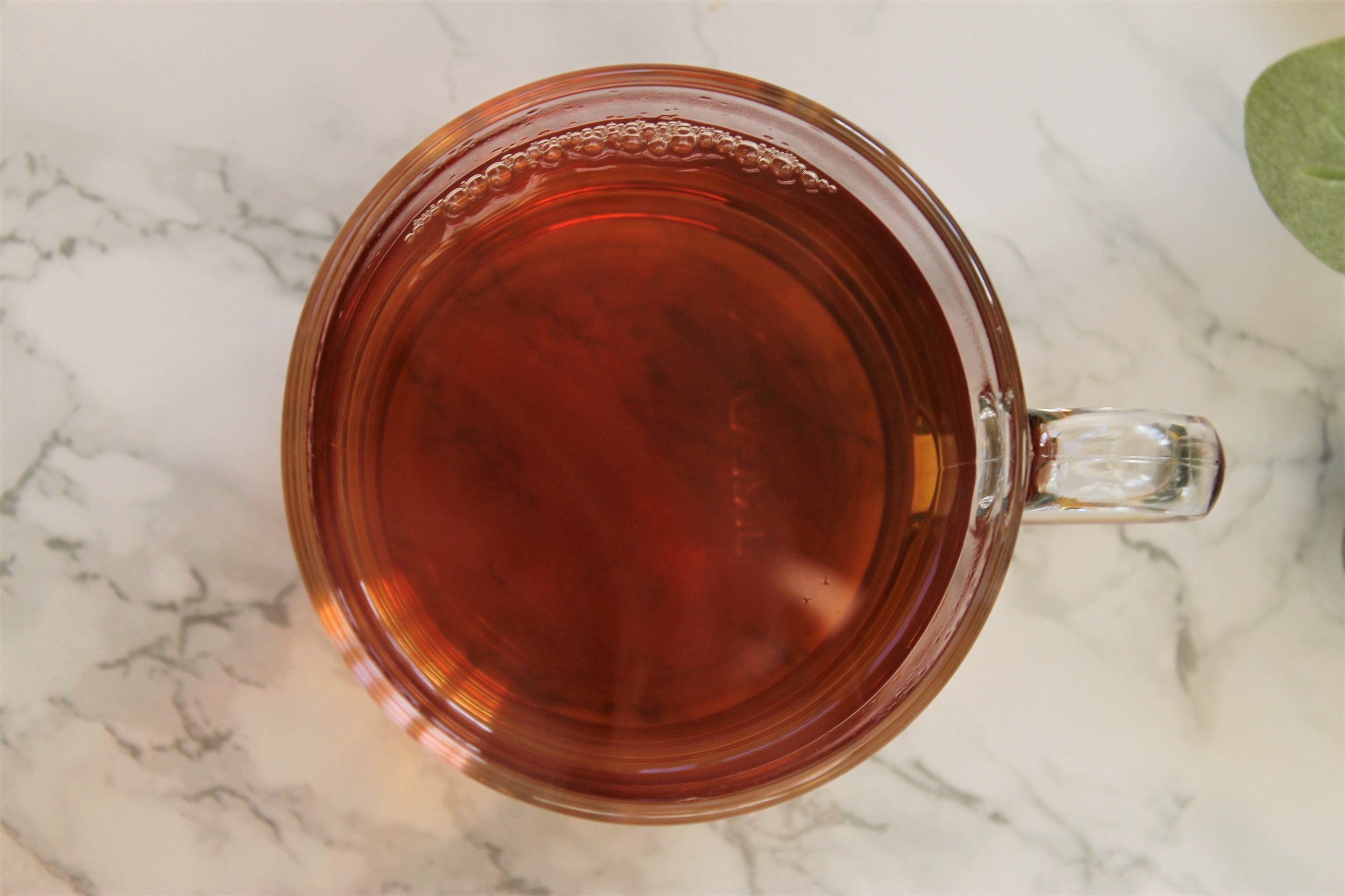 How to Brew Peppermint and Black Tea

Use very hot water for brewing this tea. I settled on 95°C rather than boiling, as I wanted to make the cup as smooth as possible. Use a generous teaspoon and let it brew for 3 minutes. Then take a sip and decide if it needs an extra minute.

You don’t need to add any sugar or sweetener to this tea unless you have an extremely sweet tooth. Don’t add any milk or creamer either.

If you don’t fancy this tea hot, try brewing 2 teaspoons in a cup of water in your fridge overnight. It’s wonderful cold brewed during the hot summer months, with a few sprigs of fresh mint and even a slice of lemon.

The leaf in this tea blend is OP1 quality and from the Kandy region of Sri Lanka. The peppermint leaves are from an unknown source and quite finely chopped, but at least it’s not artificial flavouring! It’s quite impressive that they created that candy cane aroma without any added sugar. 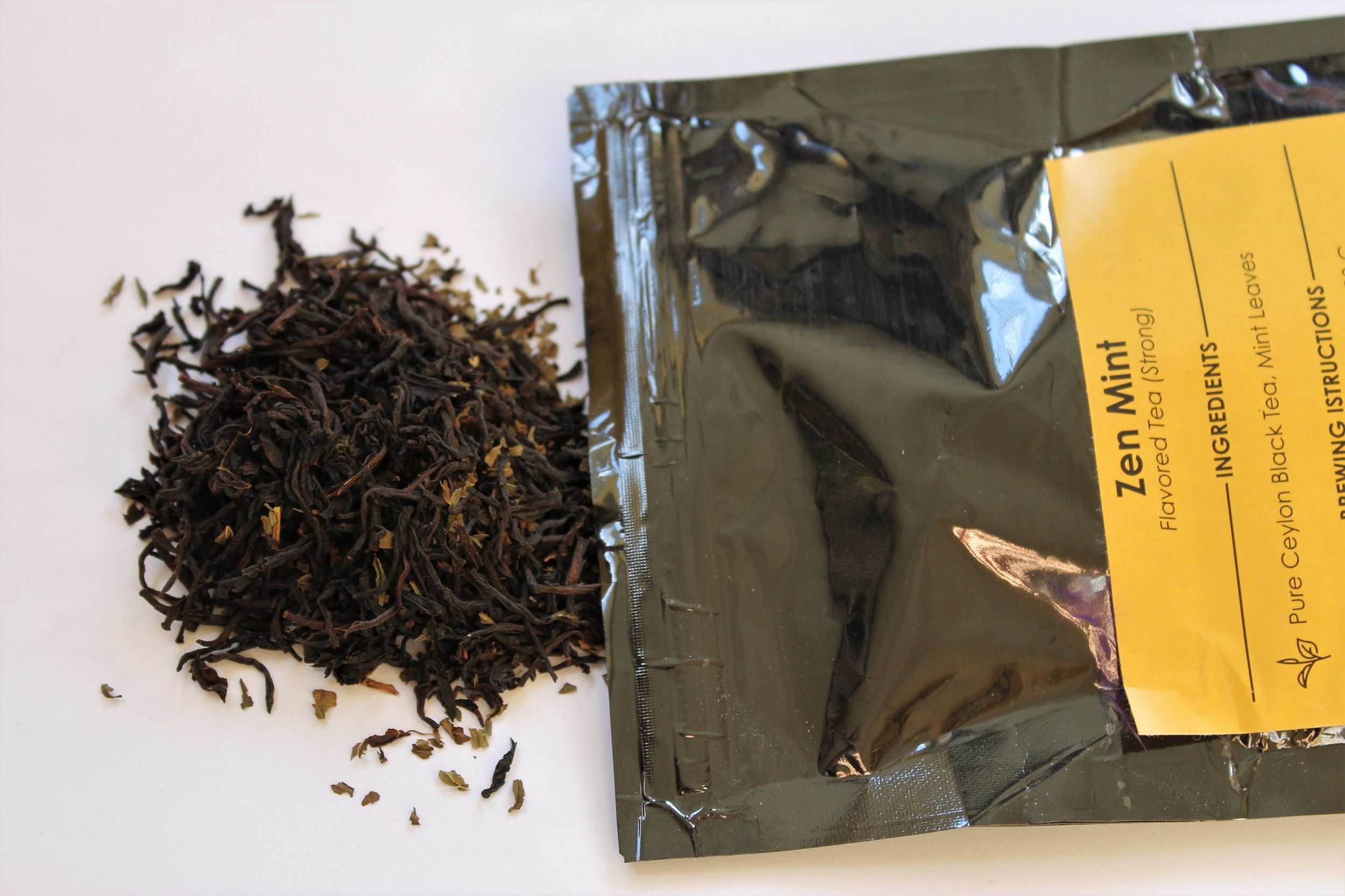 You can buy it in sample sizes to start with, but if you’re a huge fan of peppermint black tea then I suggest throwing caution to the wind. Check out the 160g bag size.

I highly recommend this tea, it’s definitely one of the best minty black teas I’ve reviewed for the blog – if not the ultimate best I’ve ever tried. The only place you can buy this tea is from Teakruthi’s official website, but don’t worry, they ship internationally and often run sales and discounts (it’s worth signing up to their email list).

Buy This Tea from Teakruthi 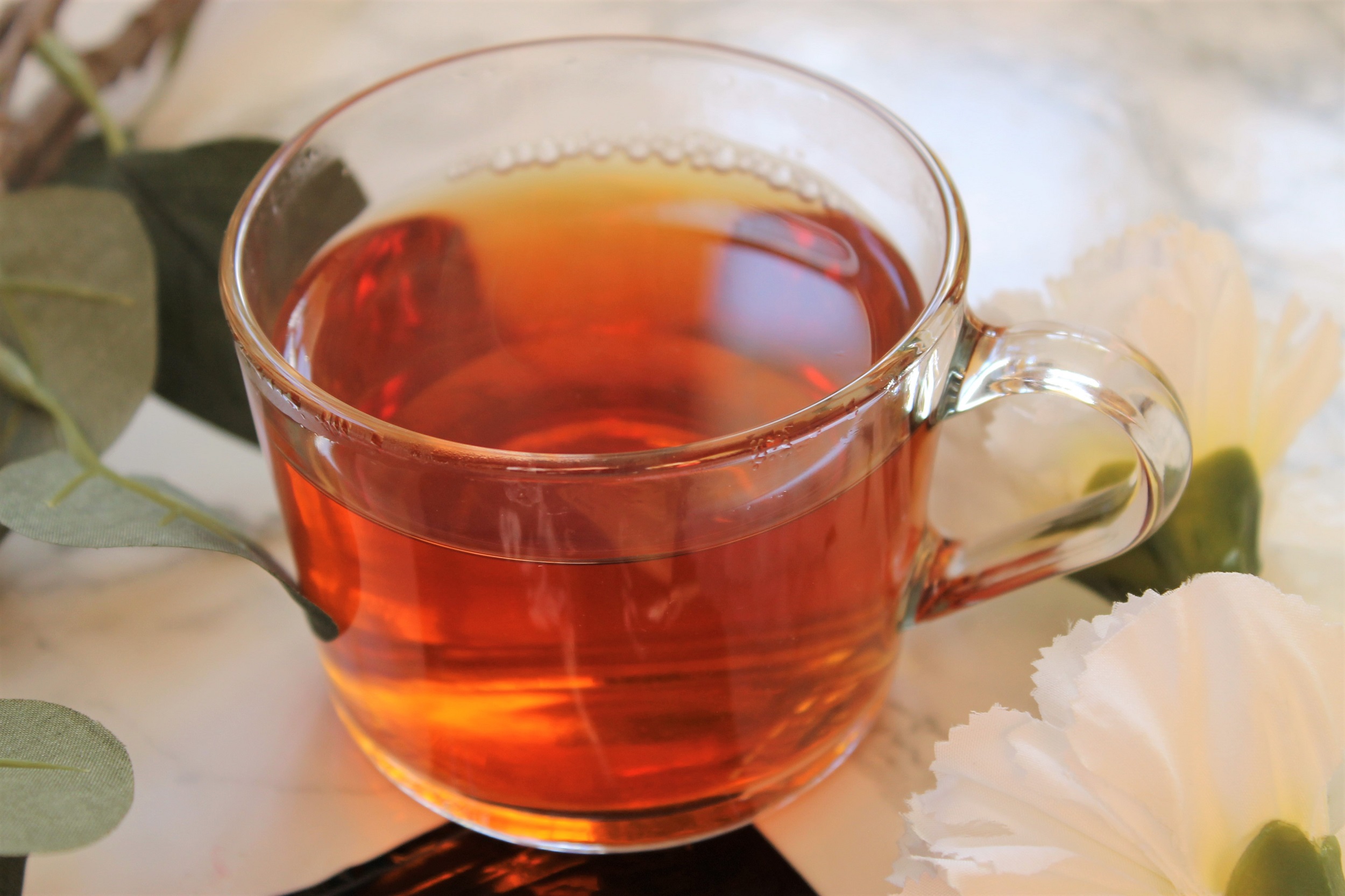 If you want to browse more teas from Teakruthi or find a new brand of tea to explore, use the tags at the very end of this article or check my Tea Review Index. This is where I’ve sorted and categorised the hundreds of tea reviews on my blog for easier navigation.