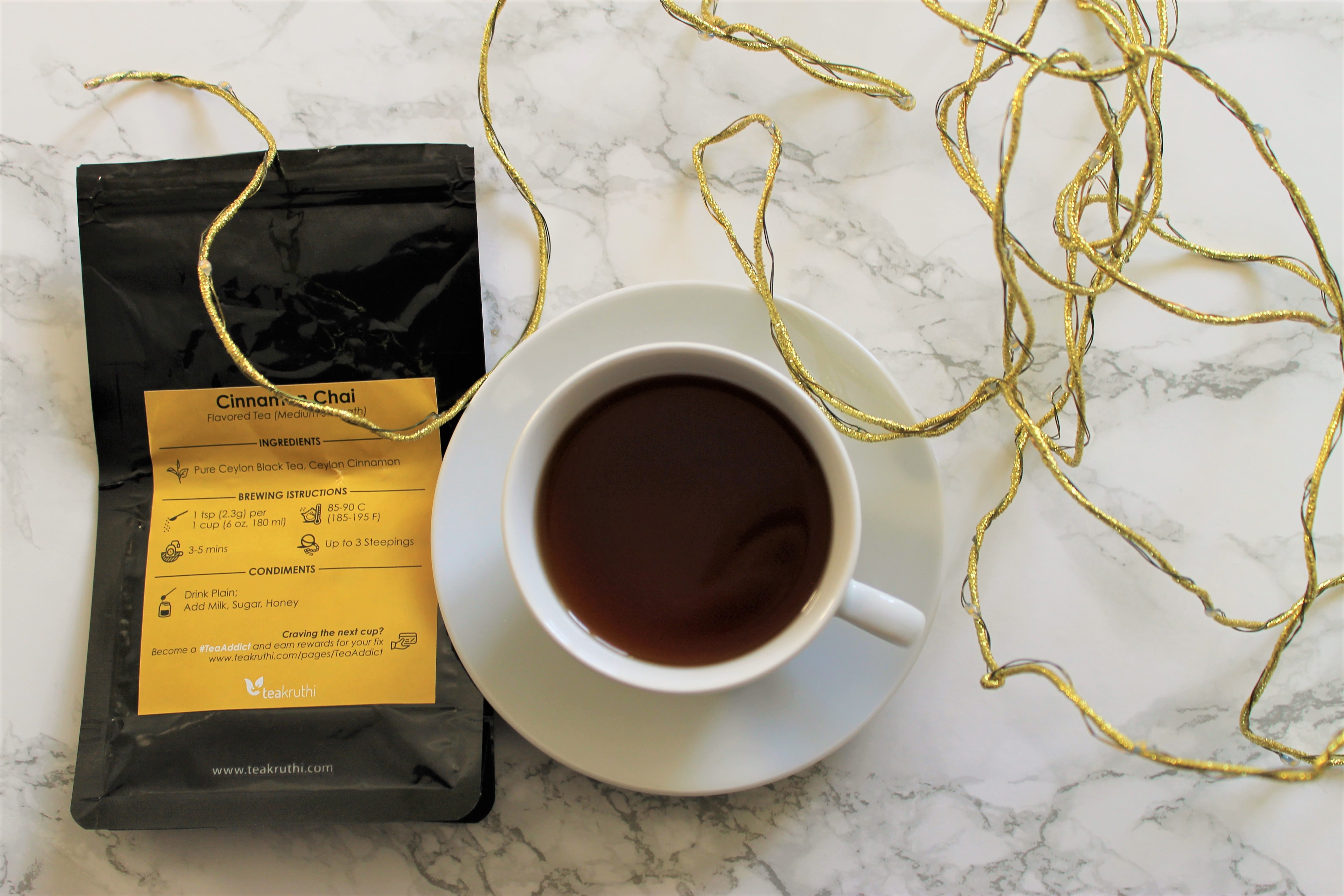 A chai a day is becoming the norm in my home right now. Today’s choice was Teakruthi Cinnamon Chai, a spiced black tea with fresh, high-quality ingredients from Sri Lanka.

I’ve tried several Teakruthi teas at the point I’m reviewing this one (use the tags at the bottom of the post to browse all of them) and I have to say, I was really looking forward to this one. I know that the black tea used by Teakruthi is good quality and I’d heard great things about Ceylon Cinnamon.

Teakruthi Cinnamon Chai at a Glance

A tea that could be great but is lacking a pleasant flavour. The black tea is quite bitter and the cinnamon is virtually non-existent. It’s not my cup of tea, but who knows – maybe I received a bad batch. 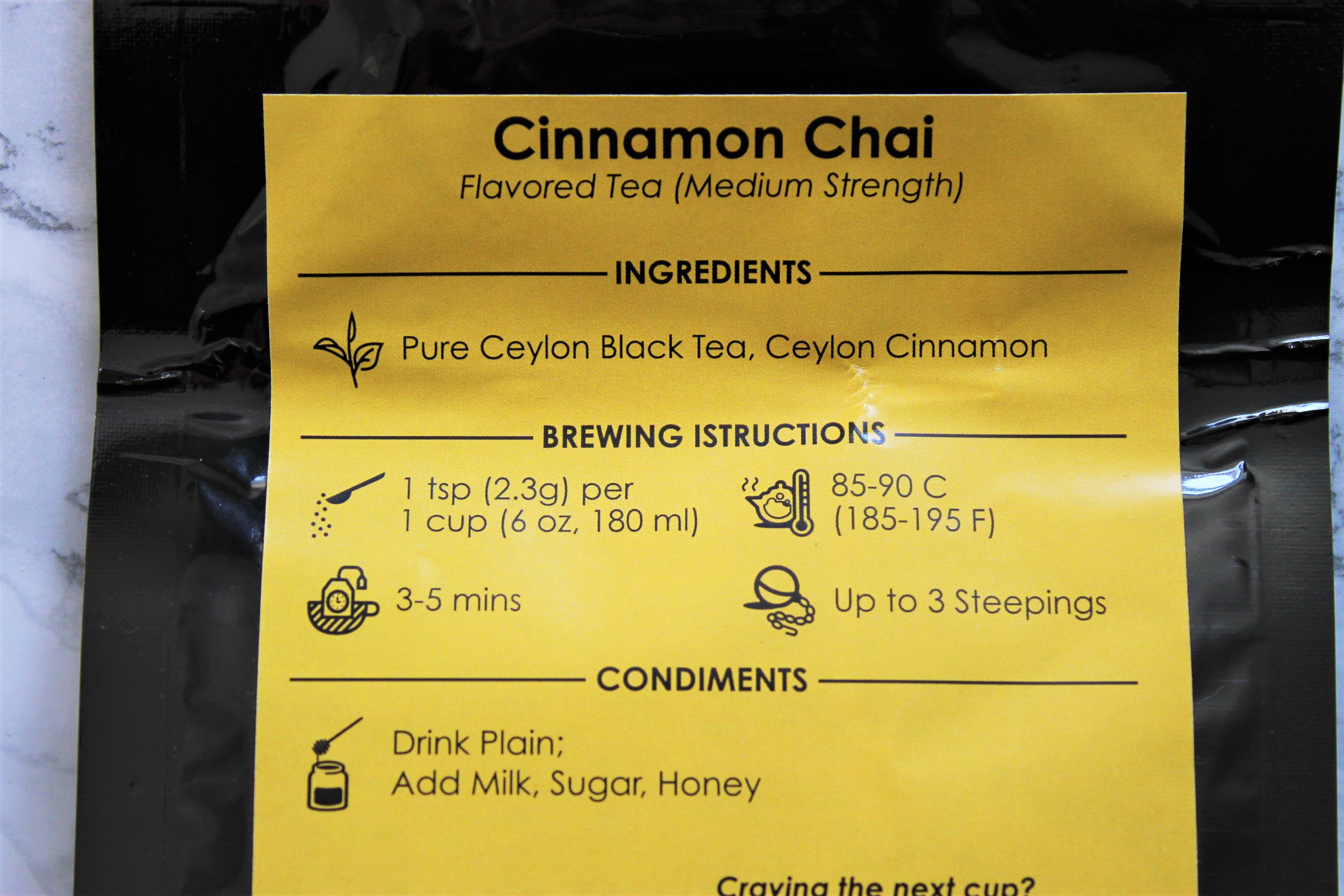 Opening the packet… there’s nothing. And I know it’s not my nose playing up because I checked other teas and they had the same aroma as usual. I tipped out some of the loose leaf and quite literally stuck my nose in it. There’s a faint hint of cinnamon and nothing else. The tea was sealed airtight and hadn’t been opened before, so I’m not sure where the aroma disappeared to.

It brews into a coppery brown colour, verging on cinnamon stick. The aroma is malty and sweet black tea, very appealing. But now the cinnamon has disappeared! What a strange tea.

The flavour, when I take a few tentative sips, is not good. It’s very bitter, despite brewing at the lower temperature recommended by Teakruthi. Mostly it’s just bitter black tea, but after a while I can pick out a certain spiciness that I assume is the cinnamon. The bitterness lingers on your tongue long into the aftertaste.

I didn’t finish the cup, it just wasn’t very appealing. I will use what’s left of my tea sample to mix with other ingredients, or maybe for baking. I definitely won’t be brewing up a cup to sip for pleasure, however. 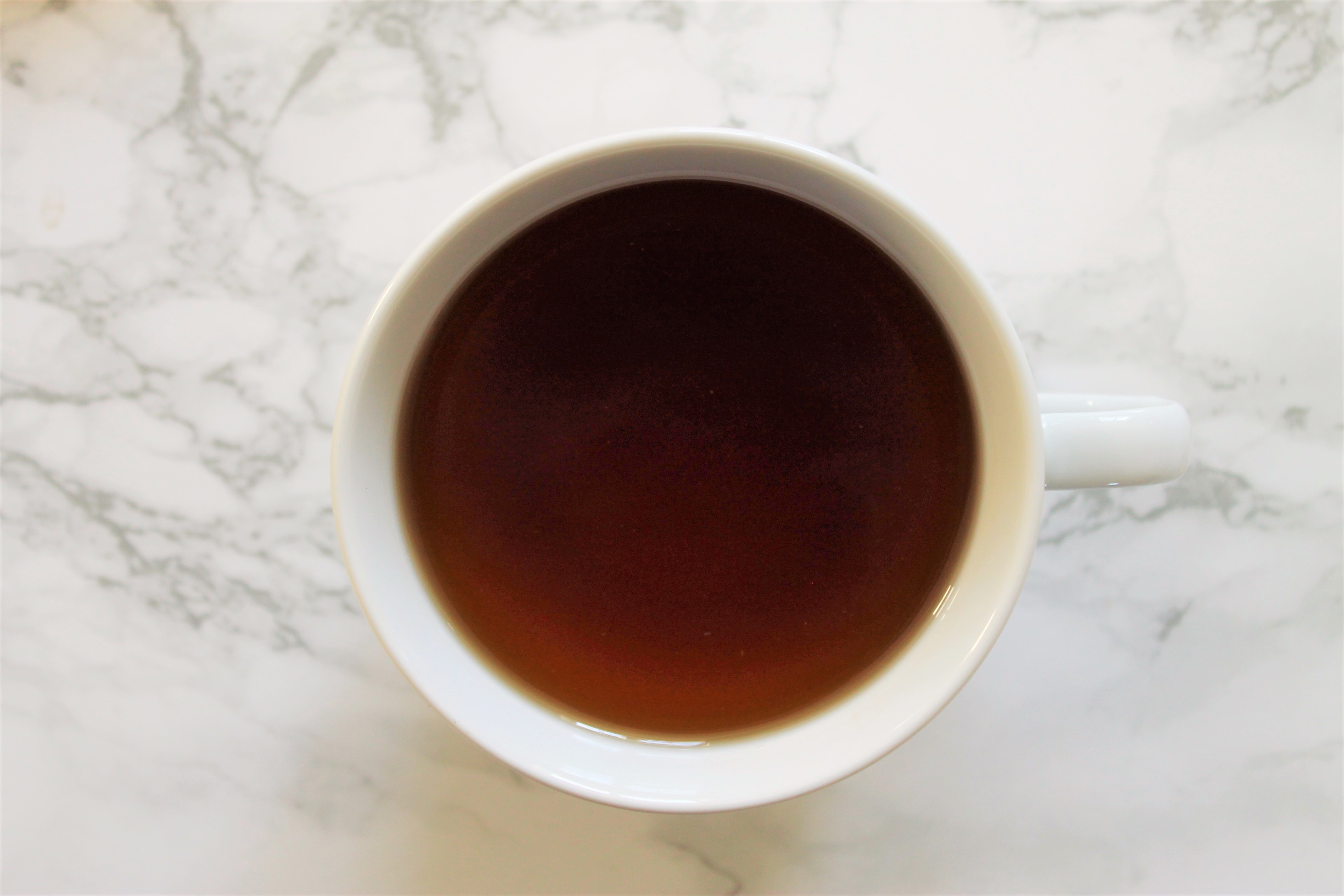 How to Brew Cinnamon Masala Chai

Teakruthi’s instructions for Cinnamon Chai is to use 1 teaspoon for 1 small teacup (180ml), brewed for 3 to 5 minutes. Online, Teakruthi recommends brewing between 95°C and 100°C. On the packet I received, the instructions are 85°C to 90°C. I settled on brewing at 95, as it’s a black tea.

The level of bitterness from this tea leads me to believe that even at lower temperatures, the natural bitterness of the tea and cinnamon will shine through.

Feel free to add a good splash of milk and something sweet to this tea, to improve the flavours. You could try adding syrups too, as the blend of black tea and cinnamon is quite simple. Orange syrup would be my choice, or perhaps vanilla.

Teakruthi offered to send me a large box of samples and I’ve been working my way through them one by one. I open each packet as I’m reviewing it, to keep the tea as fresh as possible. 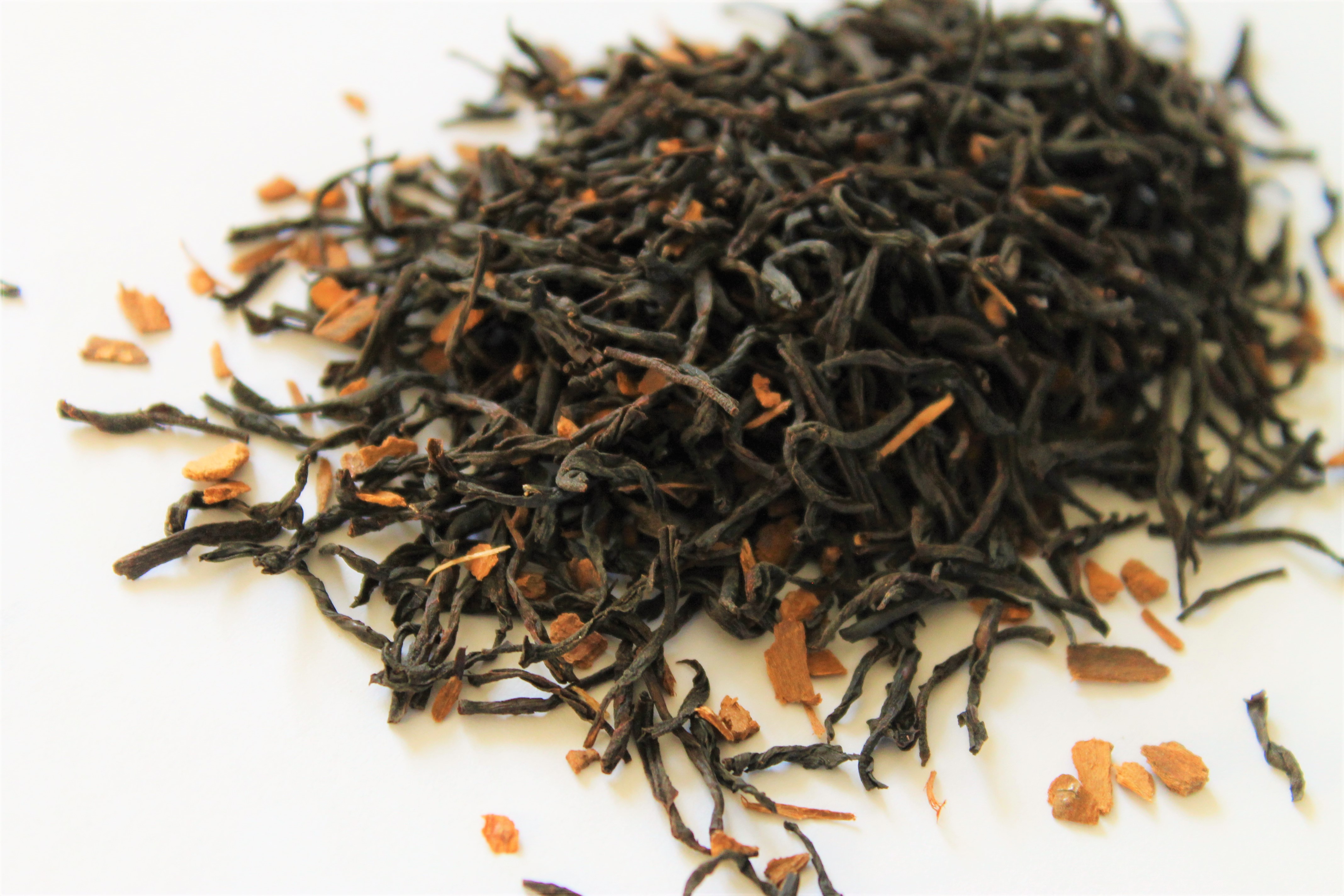 In terms of quality, this tea would appear to be quite good. The tea leaves are OP1 grade and the cinnamon is “pure” Ceylon cinnamon, which is not the same as the bog-standard cinnamon you pick up at the supermarket.

It’s just the flavour that I can’t get over. I’ve examined it all over and decided that there’s nothing wrong with this tea, it just doesn’t have the flavour I was looking for. It’s unpleasant to my palate.

This could be a good tea. There’s always the possibility that I received a bad batch! If you want to try this tea for yourself, or maybe try a small sample with a larger order of some of Teakruthi’s genuinely yummy teas, click the button to go straight there.

Find This Tea at Teakruthi 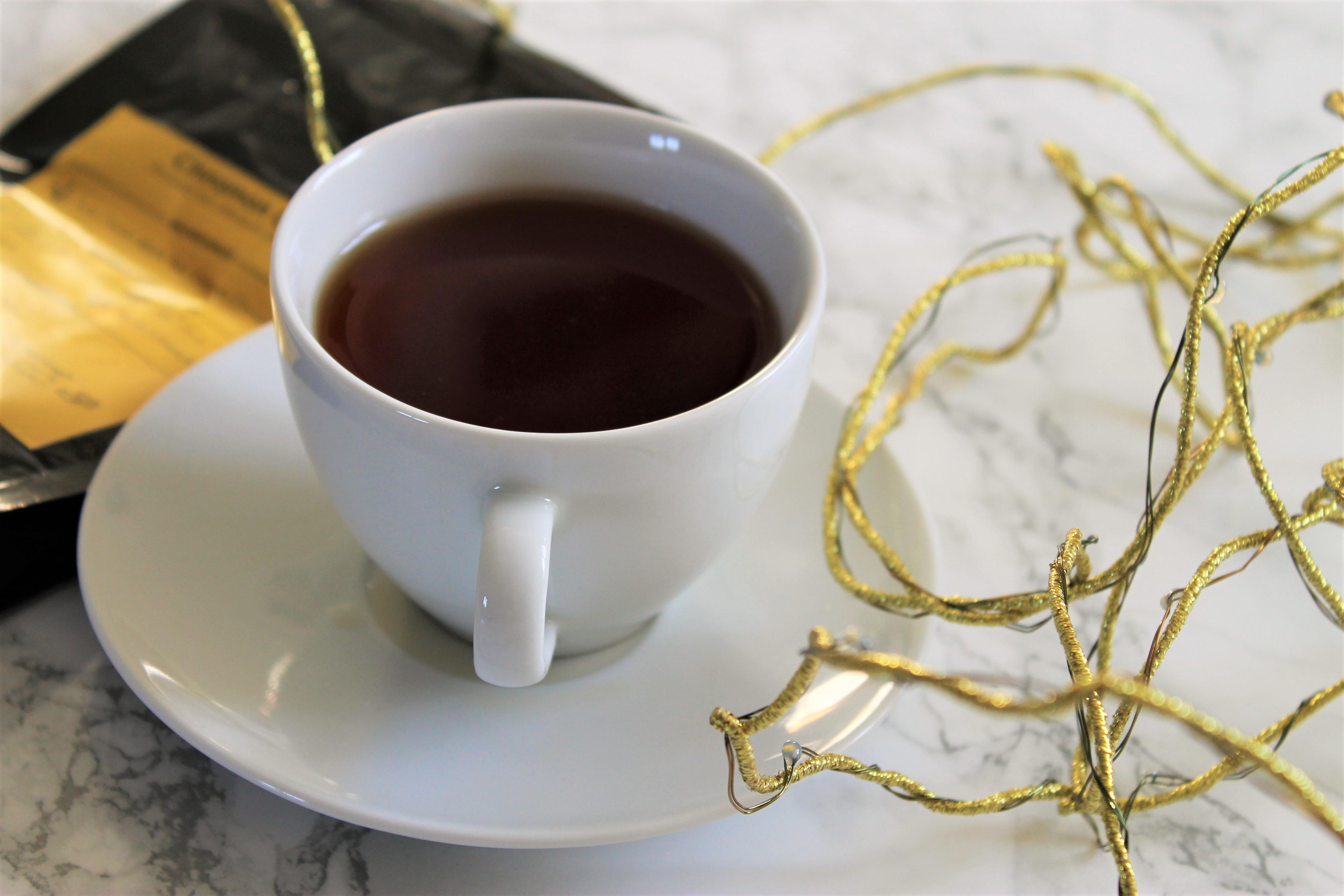 If cinnamon and black tea is your thing, I recommend taking a look at my review of Teakruthi Majestic Chai. This is a really nice chai with good spice from the cardamom pods scattered with the leaves. I had a much better experience with that one!