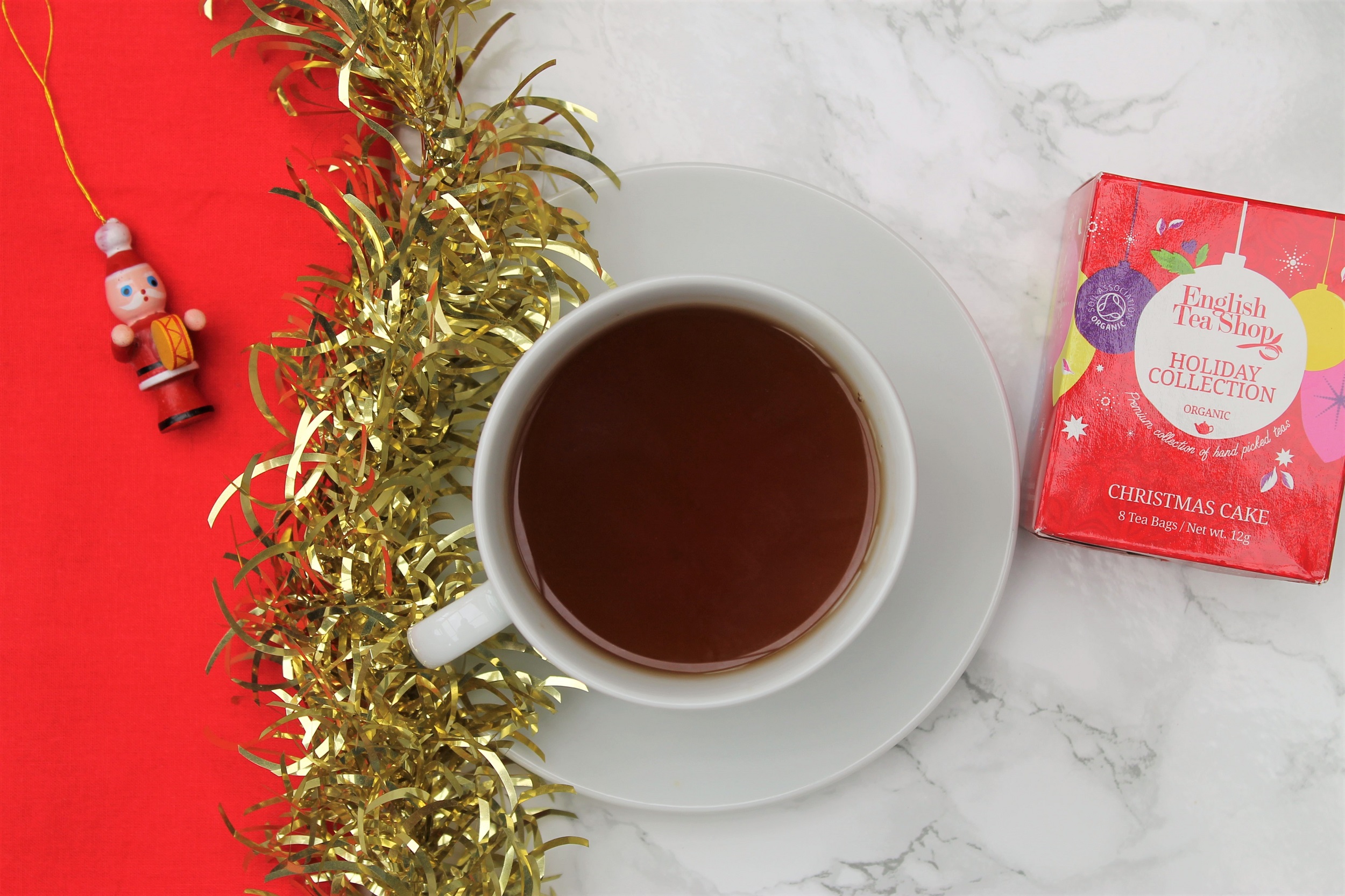 I usually have trifle after Christmas dinner. Is that weird? I often find that Christmas cake or Christmas pudding is just far too filling after I’ve stuffed myself with turkey and pigs in blankets.

That’s why this tea caught my eye. The idea of having a lovely spiced Christmas cake without getting full up is revolutionary. Unfortunately, I didn’t get to brew this tea on Christmas day, but I’ll be sure to save a teabag or two for next Christmas!

This is the full review of English Tea Shop Christmas Cake Tea, one of 12 teas in the ETS Christmas Tea Collection that you can buy all year round (yay).

They weren’t messing around when they named this tea. The aroma is exactly like Christmas cake fresh from the oven, yet the flavour is delightfully smooth and refreshing with subtle hints of cakey goodness. 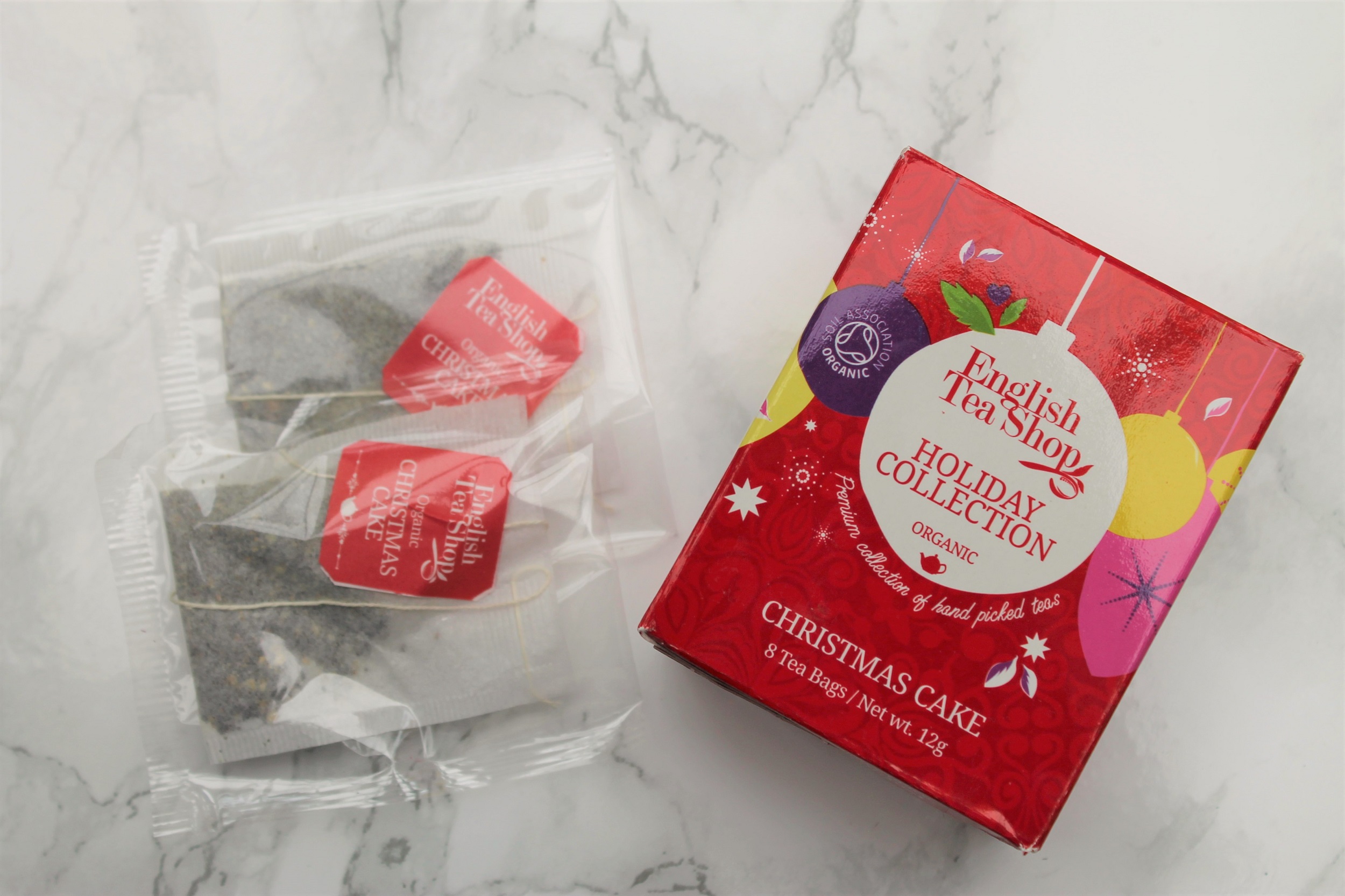 I was incredibly impressed with the oomph of the teabag! It has a very strong aroma that instantly reminds you of Christmas cake. Unlike some flavoured teas, you could do a blind sniff test with this one and immediately recognise what it was supposed to be. Notes of rich Disaronno almonds, malty black tea and sticky toffee pudding melt together to create a fruity, decadent Christmas cake aroma.

It brews into a muddy brown cake colour, but you’ll be far too excited to sip it to care that the colour is a little unappetising.

And when you do finally take a sip, there will be a moment of silence…

… because the flavour doesn’t live up to the aroma. Don’t get me wrong, it’s very pleasant. Light smooth notes of honey and malt twirl around with peaches and sultanas. But it’s not rich, thick and stodgy like a true Christmas cake. The black tea is very light indeed.

I finished the cup because it was pleasant to drink, but I just wish it was true to the initial aroma. 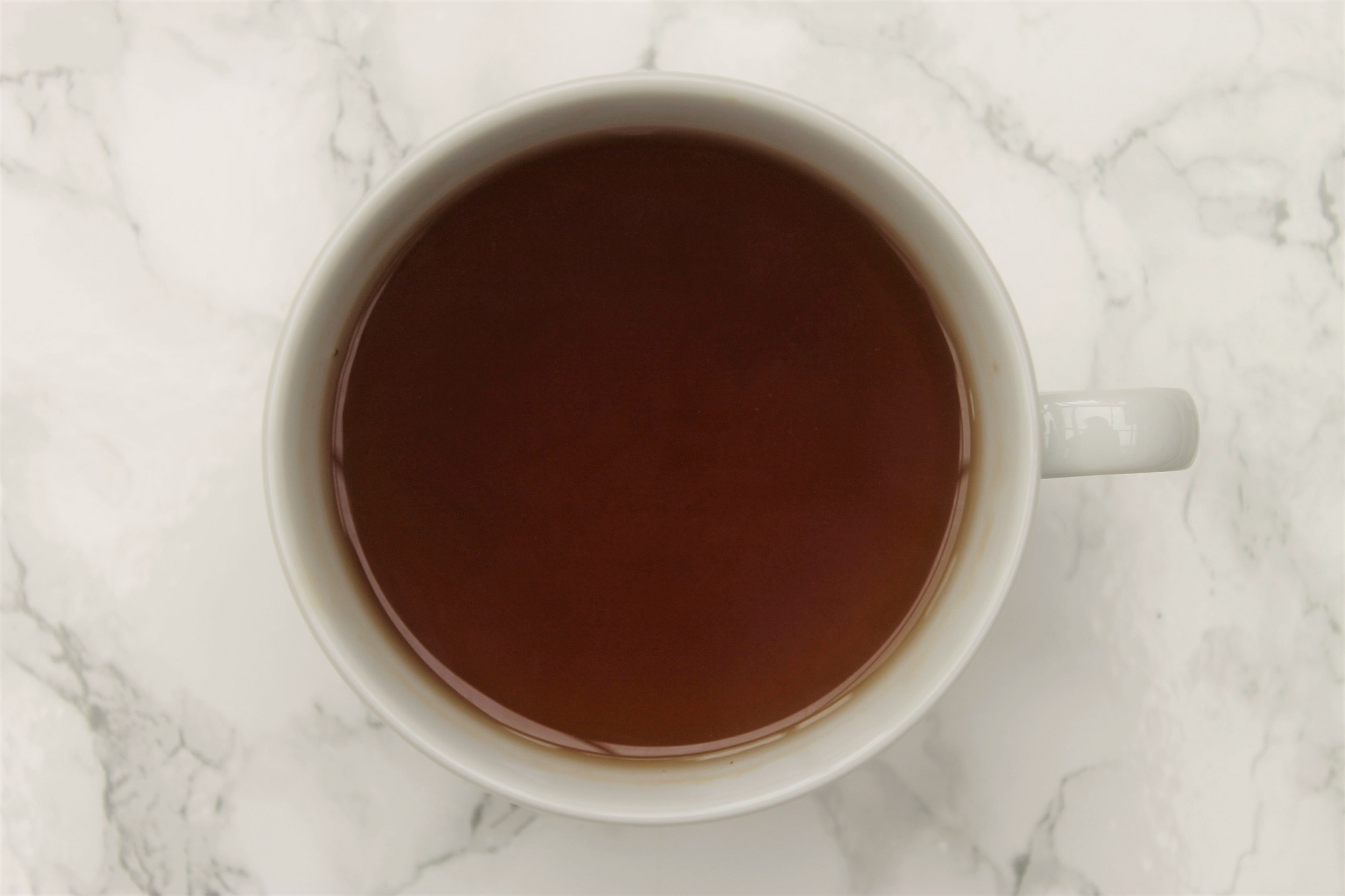 I brewed for 4 minutes, took a sip, then brewed for a further minute. 5 minutes of brewing in 100°C water did the trick for me, as I usually enjoy my teas quite light.

ETS recommends serving with lemon and/or a sweetener of your choice. I can’t see how lemon would be a good idea, but a generous teaspoon of honey would certainly be in the Christmas spirit.

This makes a nice dessert tea after a very heavy meal, but perhaps with a few biscuits as it’s nowhere near as rich and satisfying as true Christmas cake.

English Tea Shop is possibly the best tea brand around for Christmas teas. I’ve got the red bauble box of teas to share, which I’m keeping all to myself, naturally. This was the first tea I laid my eyes on… and the quality is not so good.

First, each teabag is wrapped individually in clear plastic. Why!? This is such a waste of plastic packaging and it isn’t needed. With only 5 teabags per mini box, it’s not like the tea will be stored in your cupboard for months at a time. They could have been wrapped together in one piece of plastic and that would have sufficed. 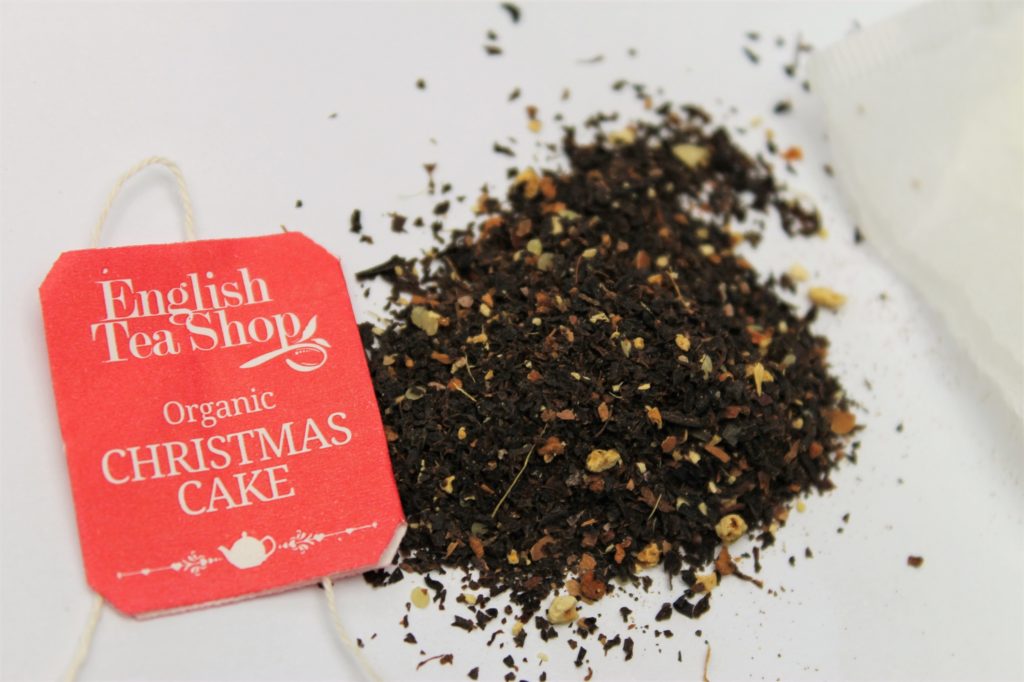 Furthermore, even though the tea is pure Ceylon tea, packaged in Sri Lanka where it was harvested, it is not good quality. The flecks are tiny and you can see that there’s added natural flavouring as well.

The only positive aspect to highlight is that this tea is certified organic by the Soil Association.

I do recommend this tea… as part of the collection. It’s a fantastic idea that hasn’t been executed as well as I’d like. Nonetheless, it’s very pleasant to sip and will add to your Christmas cheer. Make sure you buy the collection box using the button below to get enough tea to share with friends and family too. 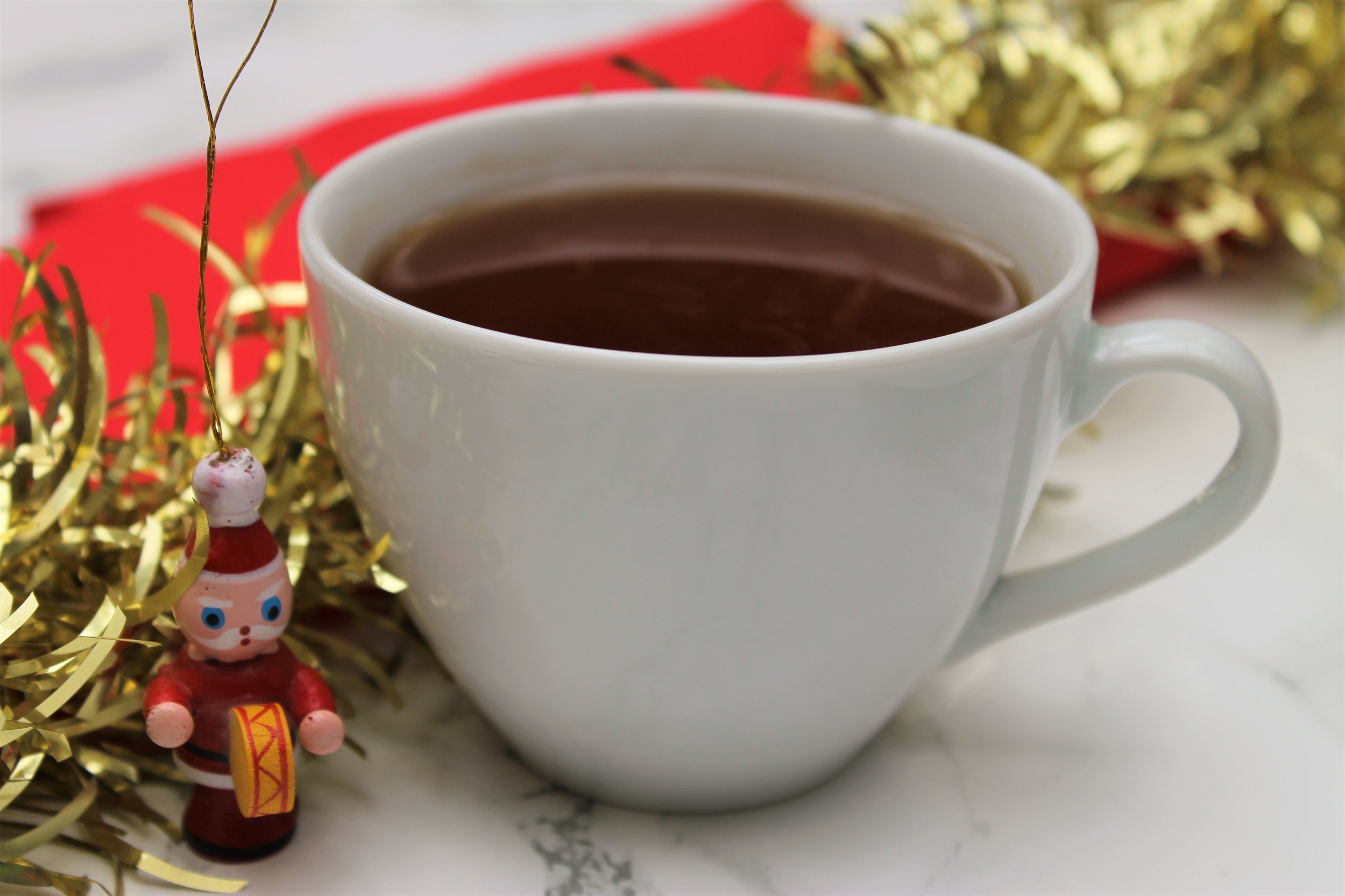 If you’re feeling super Christmassy, I highly recommend you check out my review of Whittard Christmas Tea! This is another Christmas tea with more of a spiced chai vibe, rather than a sweet and malty vibe. The 2 teas work so well together and are great for the festive season.