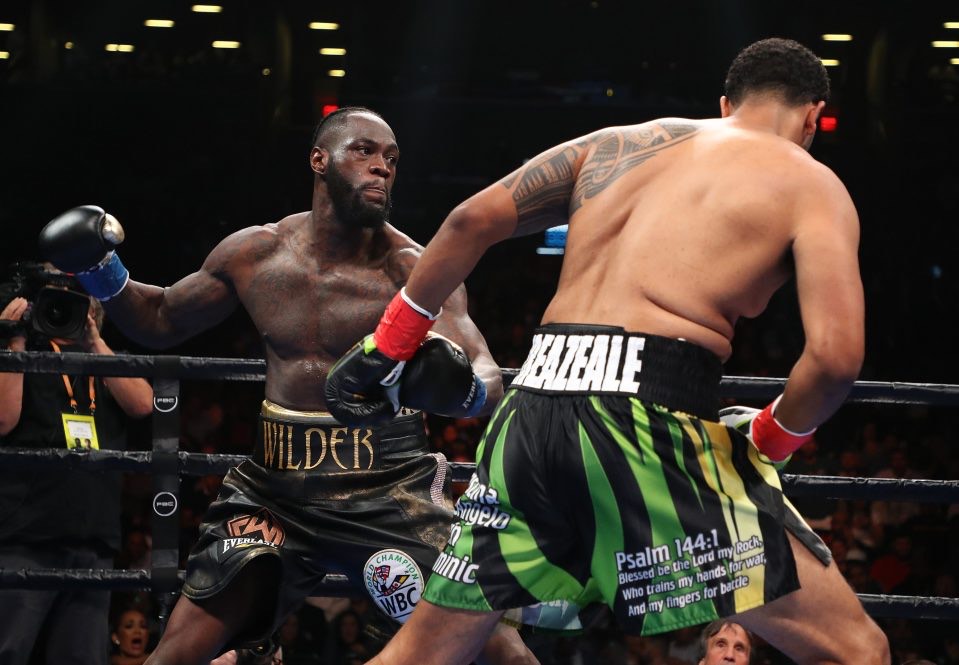 The heavyweight boxing division is set to end the year on a high, with Tyson Fury moonlighting in the WWE and Waterstones (he has an autobiography coming out), Anthony Joshua set to try and reclaim his belts from Andy Ruiz and Deontay Wilder taking on tough opposition in Luis Ortiz. There are even murmurings that Dillian Whyte may be on the AJ vs Ruiz undercard.

Either way the division is as people now say “lit”.

Which made me want to give you three reasons why Deontay Wilder deserves a bit more praise than he gets from the boxing fans.

Reason One – The Ducking Narrative

Everyone and their mother has an opinion on who is ducking who and because other sports (MMA) pit the best against the best with little regard for purses/records, boxing gets more scrutiny.

For a long time now there has been chatter from all sides about Deontay Wilder ducking AJ, AJ ducking Wilder, Fury ducking Wilder… honestly the list could go on forever.

All of this has put intense scrutiny on reigning champions and certainly AJ got a lot of bad coverage for his fight choices. Wilder though, has not had an easy time of it. While arguably you could make a case that he hasn’t got it on with Fury again or signed the dotted line on an AJ fight – you can’t make a case that he has taken an easy route.

First, he was humbled by Fury and that fight was a nightmare for him. Highlighting how woefully inadequate Wilder is as a boxer, but how awesome his right hand is. He also has a very good chin.

Then he faced off against Brazeale which of course was a mandatory fight. Wilder as we all know made light work of it and Brazeale went down like a sack of shit in round one. But don’t be fooled by how easy Wilder made it seem, Brazeale was credible opposition and had already given AJ a few questions in their fight.

Now he is set to take on Ortiz in a rematch. Which if you add in the Wilder fought Ortiz before Fury, it is already a good track record for the last year or so as the champion. Ortiz is a tricky southpaw boxer who is very technically gifted and hits hard. Wilder was already rocked badly by Ortiz in the first fight, it is going to be a tough second fight and one that a real ducker would have shied away from.

This means that in my opinion Wilder doesn’t deserve the ducking label and yes, he has beaten Ortiz before, but a second victory is far from guaranteed. Ortiz is one of the top 10 in the division. It will be a close scrap.

It does not matter who you put Deontay Wilder in the ring with. If he lands that right hand, it is going to cause tremendous problems. This makes all of Wilder’s fights incredibly exciting to watch as even though we come to expect him to be out-boxed in the purest sense, he won’t be outpunched.

Whether you’re an AJ fan or a Fury fan like myself, you must concede that Wilder has the potential to end any fight in a split second. With one punch. A punch that doesn’t need to land flush to get a KO.

That makes him a great draw as a champion and while people might not have taken too much notice before, I think after the Brazeale fight, many more will tune in to see Wilder for his next fight.

Reason Three – It’s About the Prestige and The Money

Tyson Fury makes out money is not a big deal and that his boxing is all about the prestige. This isn’t true and certainly the kind of shrewd money deals (and sell out deals) Fury has made certainly show him to be as much about the boxing business as he is about the heritage of the sport.

Deontay Wilder is about the money – or so he says. But, deep down, you can see he really cares about being the champion. He really likes representing the WBC and he really takes pride in being the heavyweight champion.

I am sure that had he have beaten Fury, he would have been shouting from the roof tops about being the Lineal champion as well. There is a suspicion that Wilder harbours a great love for boxing and what it means to him – not purely because of the money either.

In fact, if it was about paydays, Wilder has had every opportunity to cash out and fight AJ. But, it isn’t just about the money with him – at least I think so anyway.

These three reasons set Deontay Wilder up as a great champion, and win, lose or draw against Ortiz (or Fury in February). Wilder deserves his place at the table of all-time greats.

I shared my thoughts on who I thought were the Top 10 Biggest Punchers in Heavweight History. Do you agree?