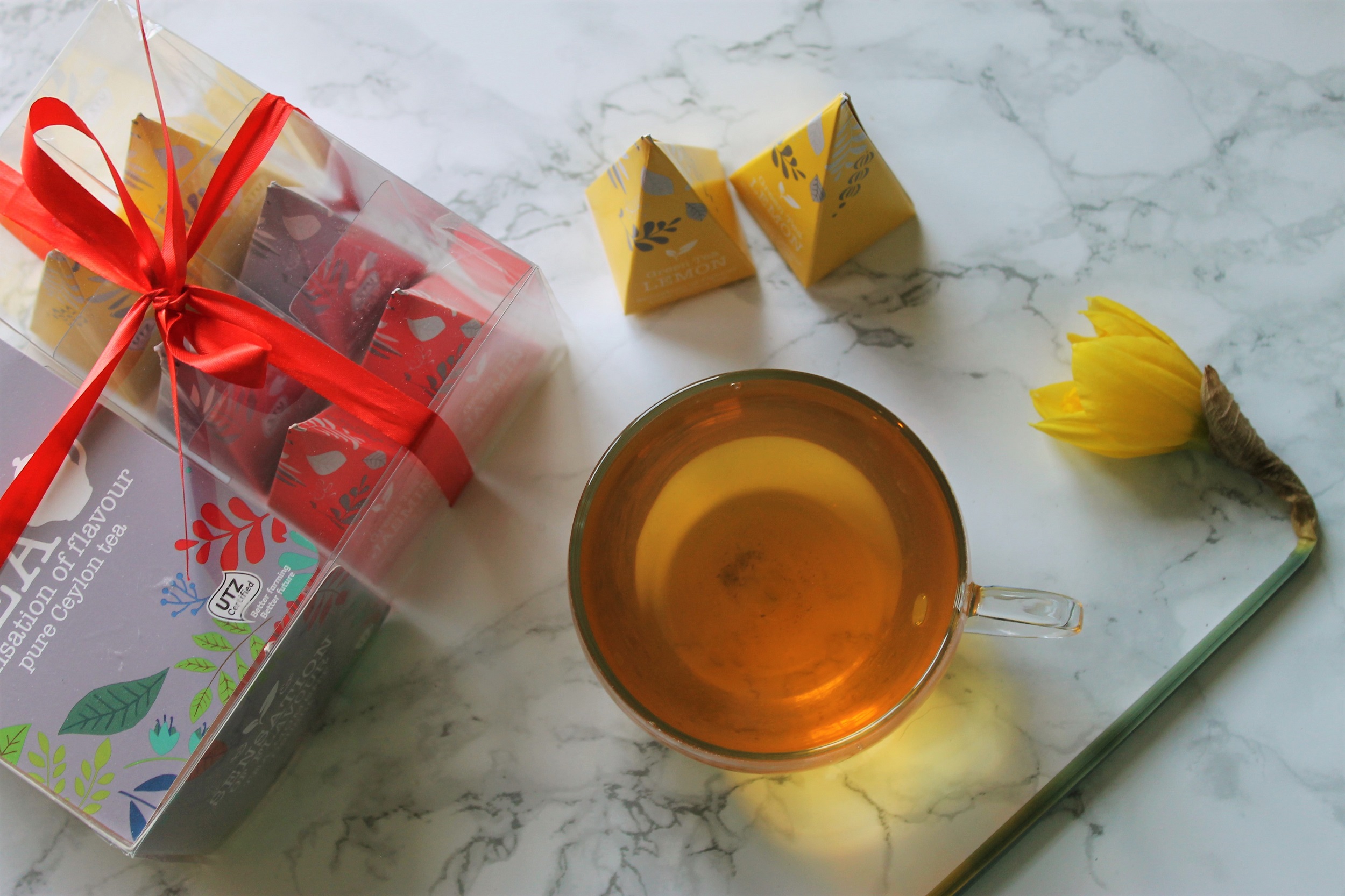 On a whimsical trip to TK Maxx, I stumbled upon this in the gift section. It winked at me with its sassy red ribbon and low price tag, so I snatched it up and took the Becky’s from Holland Tea Sensation gift set home with me.

I’ve reviewed 2 of the 3 teas already on the blog; Green Tea Jasmin and Earl Grey. Green Tea Lemon is the last, so keep an eye on the blog for an overall review of the set to find out if it’s worth buying.

For now, let’s delve into everything that’s wrong (or right) about Becky’s from Holland Green Tea Lemon.

Becky’s from Holland Lemon Green Tea at a Glance

Unfortunately, not a great cup of tea. Served with a generous squeeze of lemon juice, this is a pleasant cuppa to sip in the afternoons… but it’s not going to blow your socks off. 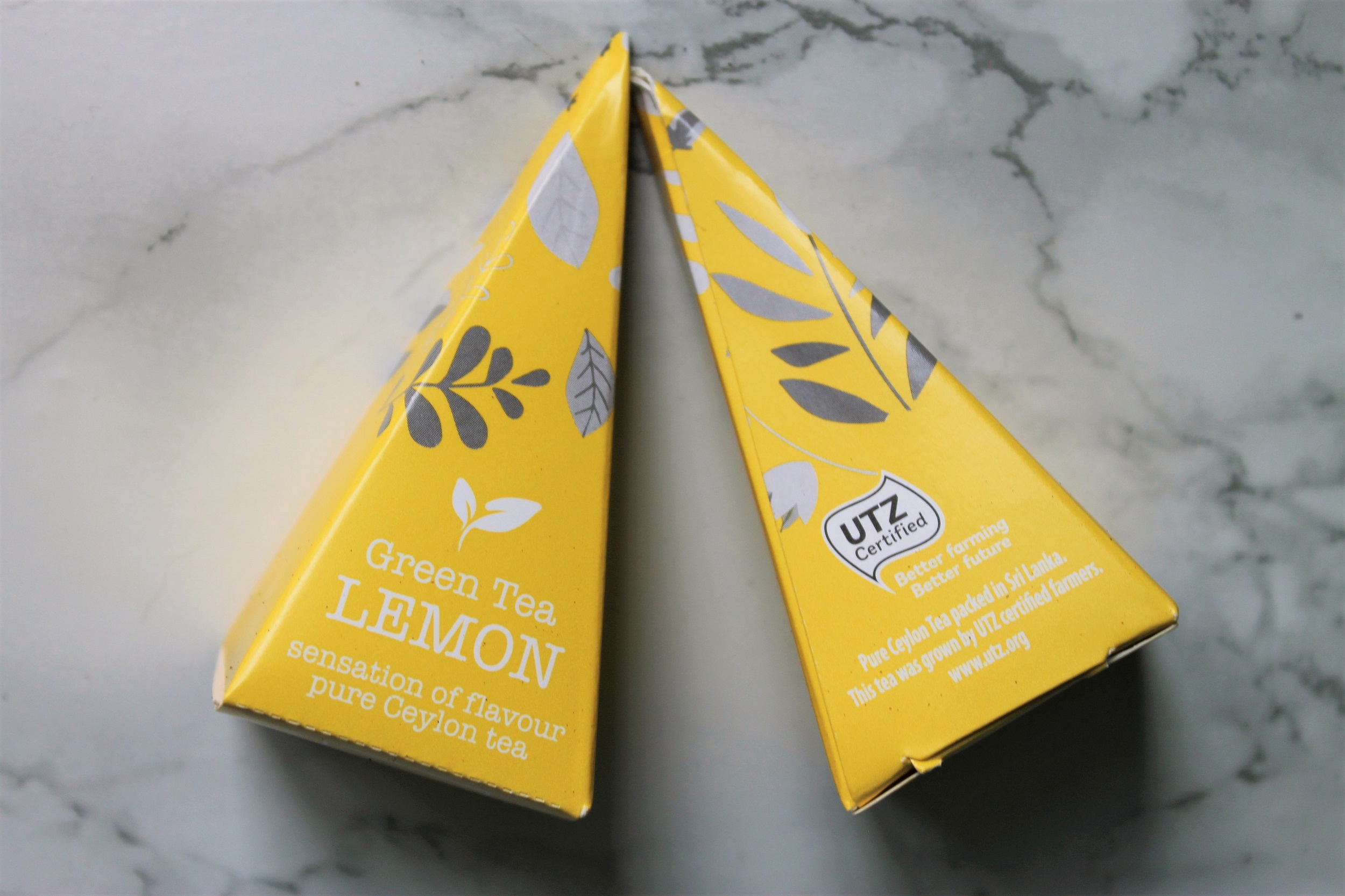 I’ll be honest, there’s not much to say about this tea but I’m dedicated to reviewing all teas fairly and thoroughly, so here goes.

Opening the card pyramid (I’ve stored the giftset airtight to preserve it) I get the faintest whiff of old green tea. It’s not mouldy and hasn’t oxidised over time, yet it lacks aroma. There’s no hint of lemon either.

I brew it according to instructions until the tea liquid is the colour of golden egg yolks, but perfectly clear in my glass teacup. The steam it gives off has a hint of sharp, sweet lemon and what I think is a hay-like green tea base – but it’s too faint to be certain.

After nearly dipping my nose into the tea to get a good idea of the aroma, I take a sip. I’m not disappointed when it tastes bland and weak, because the aroma already told me as much.

There’s a hint of lemon zest but it’s neither sweet nor sour. The only notable flavour is a strange bitterness that affected only the very tip of my tongue into the bland aftertaste.

Sorry, Becky, but this lemon green tea is a let-down. 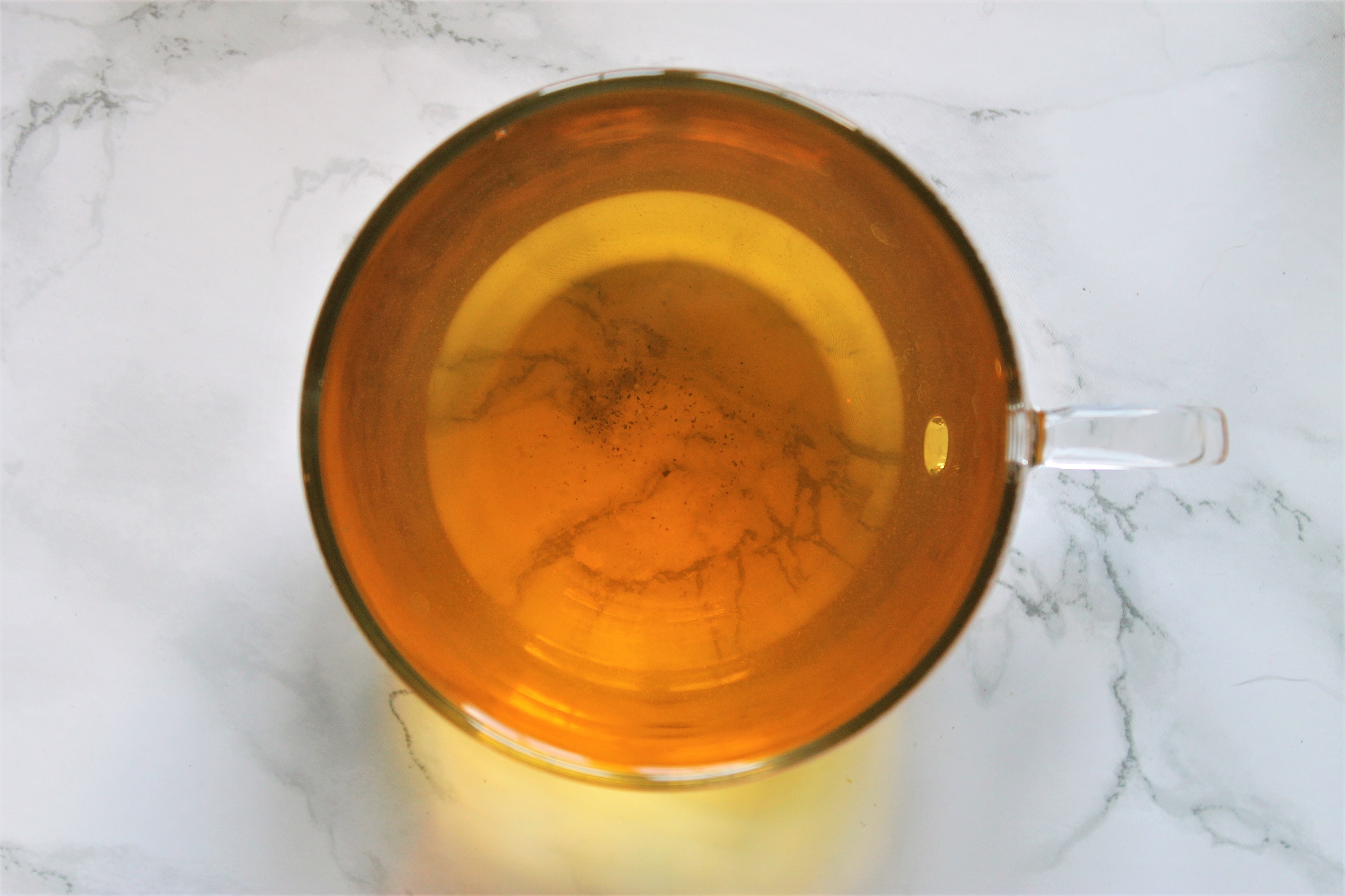 How to Brew Becky’s from Holland Green Tea with Lemon

There are blanket brewing instructions on the side of the box for all 3 teas including, directing you to use 80°C water and brew for 2 to 3 minutes. Given how stale the tea seemed, I brewed for the full 3 minutes. I wouldn’t recommend brewing for long as that seems to draw out the bitterness and masks what little flavour there is.

Drink it with a good squeeze of fresh lemon juice or try cold brewing this tea with a handful of fruit (I like strawberries with lemon green tea) to boost the flavour in the summer months.

Why Becky’s from Holland Sensation of Flavour?

I’ve gone over some of my main points about why I selected this tea and why you might do the same in my previous reviews, so don’t worry, I won’t repeat myself.

What I will point out, however, is the quality of this blend. There was 1 tiny 0.5cm piece of lemon peel in the tea sachet… and yet it was still a more dominant flavour than the teaspoon of broken green tea leaves. That tells you a lot. 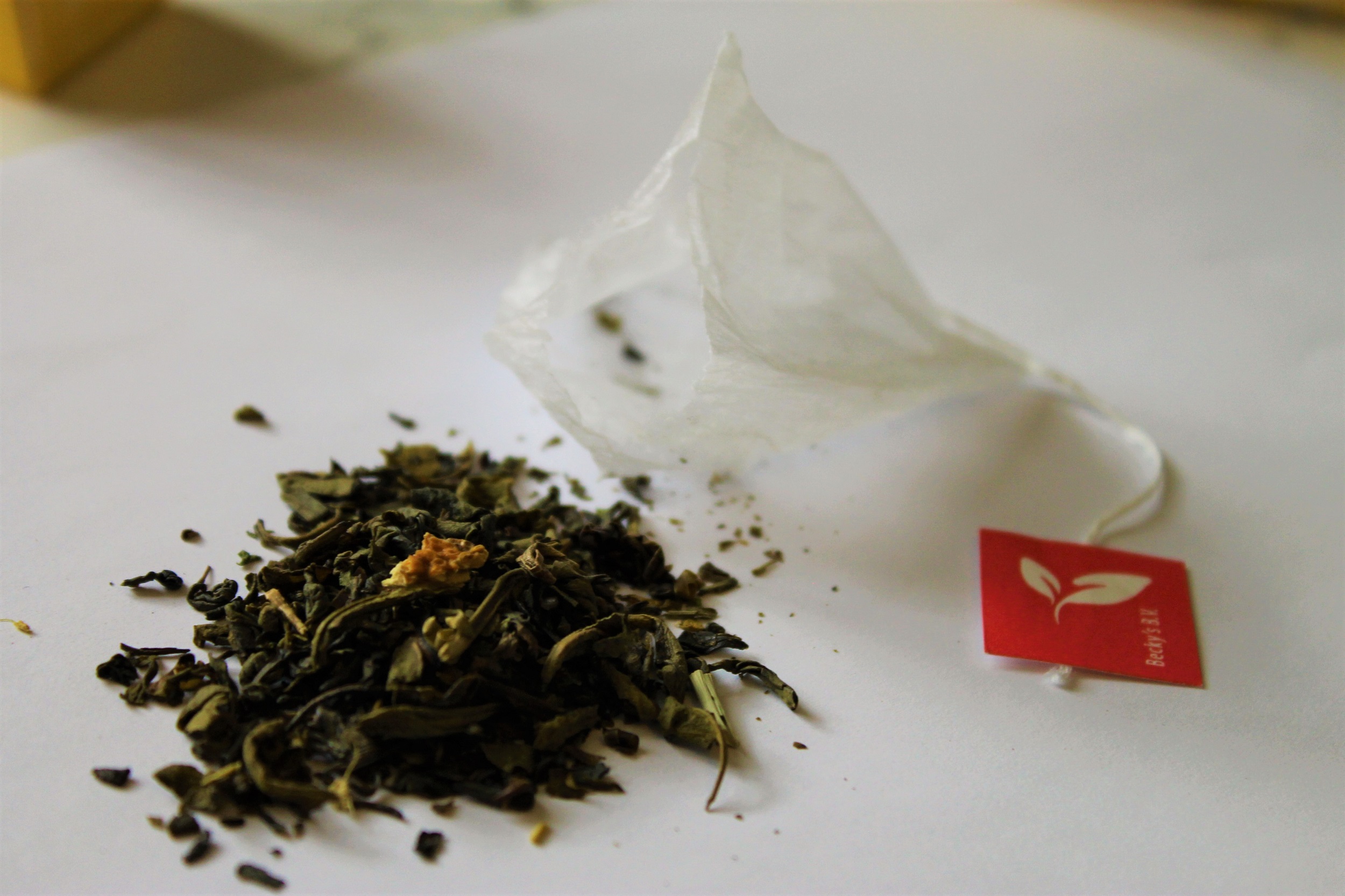 For someone who likes weak tea, who isn’t bothered by quality, this is a passable tea. You could buy it as a gift set for someone who doesn’t particularly like tea, and they’ll think it’s fine. But if you’re considering this tea set for a true tea lover, I urge you to reconsider. There is a tonne of more worthy teas that I’ve reviewed on my blog so check those out instead.

No, I don’t recommend this tea. I’ll drink the other 3 Becky’s from Holland Green Lemon tea bags because I don’t like to create waste, but don’t for a minute think that I’ll be enjoying every second.

Look at this tea on Amazon (it’s usually priced cheap) so you can decide for yourself if it’s worth the cost. 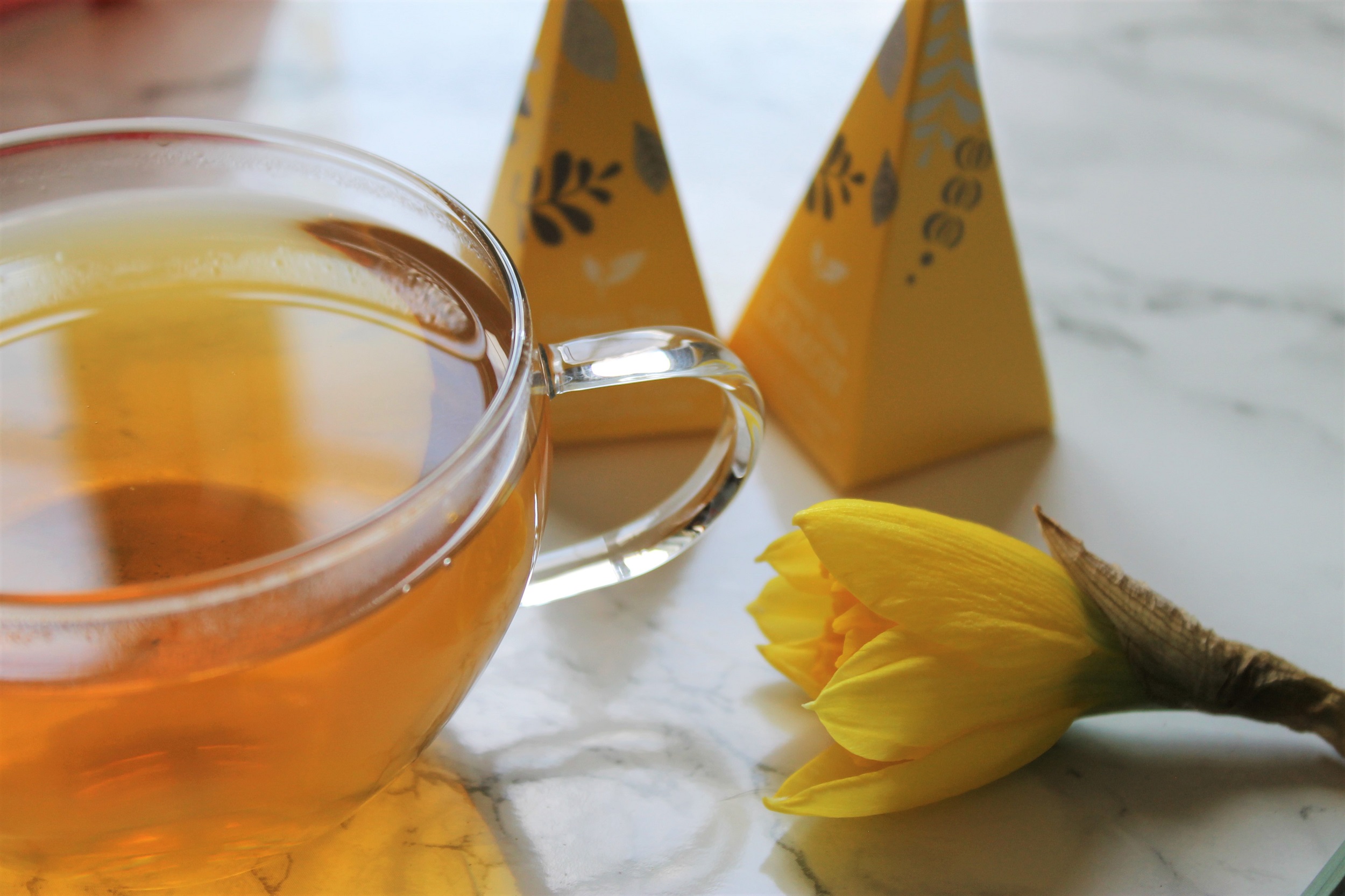 If you’re looking for a green tea that’s a little more exciting than the classic lemon green tea, I urge you to read my Whittard Silent Night tea review. Yes, it’s Christmas themed but this delicately spiced green tea is one of my favourites all year round.