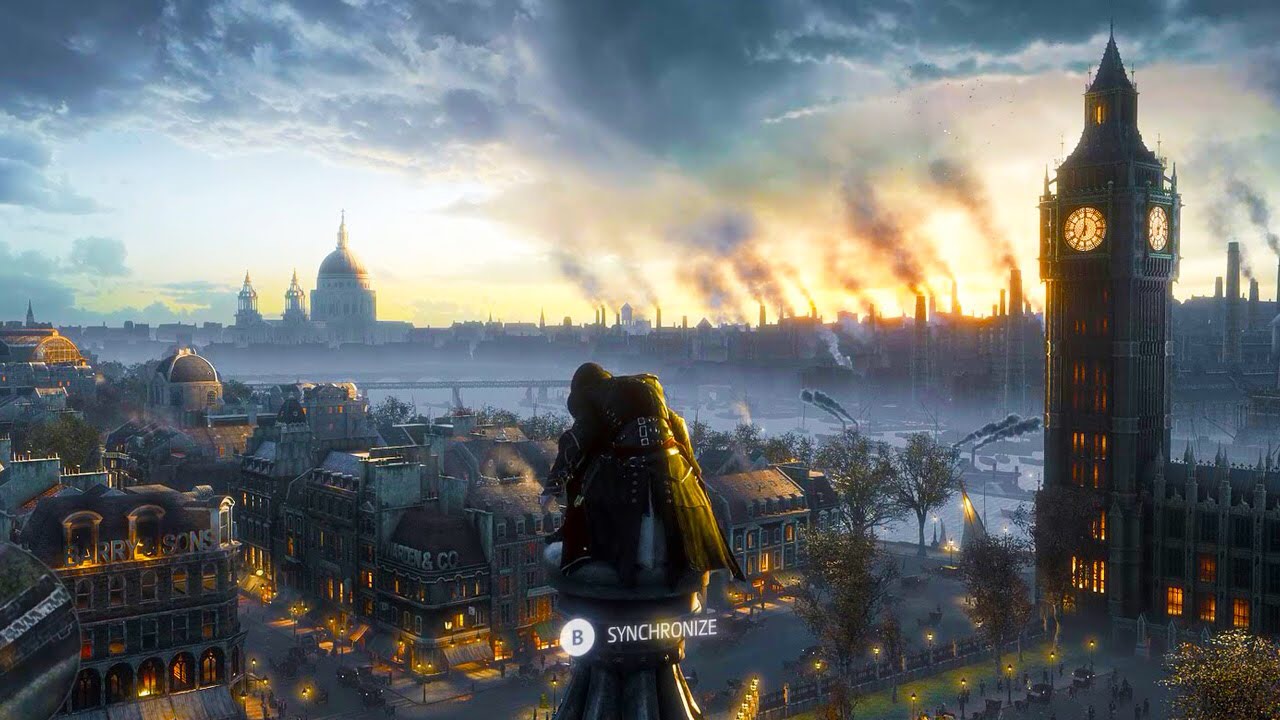 This review has been a long time in the making and I actually completed the game a while ago. I was going to wait until I had played the downloadable content before reviewing it. But I figure I will review that separately if I get around to playing it (more on that further down).

Assassin’s Creed Syndicate is the first Assassin’s Creed game that I have played in years. I originally started my Assassin’s Creed journey with the original game which was mostly spent collecting hundreds of flags with the occasional assassination. The game had a lot of promise – it looked good and if the mechanism for the assassinations was better (if you were actually able to do each one stealthily) then the sequel could have been immense.

Assassin’s Creed II was not immense though, a few missions in I stopped playing, it felt as though I had played the game before and there was nothing new on offer here.

Ubisoft have a horrible pattern of creating something promising and then recycling the formula over and over until it is dead. Rayman Raving Rabbids by way of an example.

It is for that reason that I dismissed any new Assassin’s Creed releases. The suspicion that Ubisoft were re-churning the same thing but in a different time frame or location was at the forefront of my mind. If anything, the trailer for each new release confirmed it.

Available on Amazon for both PS4 and Xbox One

I bought it hoping that it would do the era justice, but deep down I was certain I would be disappointed.

After buying it I put the disc in and played through the first level and I was immediately impressed. First off, the game play, movement and feel is very smooth. It isn’t seamless but it is a lot smoother than the clunky mechanics of Desmond all those years ago. More impressively, it was smoother than most other games I have played recently.

Being plunged into Croydon on board a train for the first mission, you’re transported to a Victorian London that is not only passable, it is half decent. It is stylised and a bit too empty to feel truly authentic but it does capture a traditional London atmosphere.

The main points that I think Assassin’s Creed could have worked better on with London are;

Aside from the lovely location work that develops and unfolds as you go on your journey through the game, the first mission introduces you to its best feature. Or features – the Frye twins.

Jacob and Evie Frye are a huge component of why this game is so good. Playing as the descendent in the World War One side mission didn’t quite feel as good. The Frye twins added a wonderful and intriguing layer of charm to an already interesting game.

Most importantly, Evie Frye was a serious female lead that wasn’t sexualised or a stereotype (well almost – there was a silly and unneeded love story). Playing as Evie was every bit as fun as playing as Jacob and in some circumstances, it was better to be Evie than be Jacob. In this respect, Ubisoft had balanced the genders perfectly, making each as strong as the other and complimenting each other perfectly (even when they were squabbling).

I don’t think the developers were fully confident in having such a strong female lead and they did fall into the trap of writing a soppy and unnecessary love story that was implausible and a bit absurd in the context of everything else you knew of Evie. I would have preferred that wasn’t included but massive kudos to Ubisoft for not falling into the “let’s sexualise our female character with skimpy outfits” trap.

I always evaluate games heavily on their storytelling element and I am not going to stop doing it with this review. The story is okay. I enjoyed the working in of historical characters, those were implemented well and you could fully imagine the characters being involved in their respective missions.

I loved the royal touch at the end and I felt that it was really a great nod to London and that era as Queen Victoria was a huge part of that culture. It was a nice royal seal of approval that fit well with the main story arc.

The main arc was a bit hit and miss though. The main bad guy Starrick didn’t really get my attention. He seemed more of a by-product of the London he lived in rather than a legitimately evil man. Apart from the final battle where you actually fight him, you don’t feel as though he is a worthy adversary. This is a huge problem for the game which centres on liberating an oppressed London – that doesn’t feel any less oppressed when it is freed.

I am not sure why the writers didn’t make Starrick or his empire a clear blight on London. When you retake areas, everything goes on as it was except now you get attacked a bit less… it is very anti-climatic in that respect. Starrick could have been made a real nasty piece of work, instead he tried to poison some medicine and experiment on some lunatics… it’s just a bit… silly.

Story Outside of The Animus

While the main story that centres on the Frye twins is a little rubbish (with the exception of the cameo appearances and the twins themselves), the story of what is going on in the modern (real world) is very good and the end sequence complete with faux cockney soundtrack is very compelling. This is a particular strong point as it is given so little air time but you really felt as though the outcome of the events in 1800s London would spill over into the real world.

This showed that the writers of Assassin’s Creed Syndicate are capable of writing decent material. It begs the question of why they didn’t for the rest of the game?

For those who would like reminding of the moment I am talking about I have linked it here;

The Assassinations in Assassin’s Creed Syndicate

That is good in one sense, but I also used the word ease, which should never be used when discussing bosses on a video game. Assassin’s Creed Syndicate was a little bit too easy and the assassinations although cool, weren’t satisfying because you never felt as though you had earned the kill.

Starrick by contrast was a bit harder which you would expect with him being the final boss but even then, it wasn’t too much effort. It would be great to have the dynamic game play and locations with a target that is smart enough to be difficult to outwit. Assassin’s Creed hasn’t got there yet but I feel as though they are on the right track.

This is a problem with most open world games and certainly not exclusive to Assassin’s Creed Syndicate. It is however a massive issue for the two Assassin’s Creed games I have played through. Both had a large portion of side missions (or collecting things) that were boring as hell.

In the original game it was endless flag collecting. In this game the glitches aren’t too bad but the other things that you pick up are tedious. Like posters that always seem to be in the exact same type of location or beer bottles or letters…

Syndicate does a better job of the collecting things routine and the music boxes present a nice and rewarding challenge. All other collections though are pretty useless except for achievements and I like to get my achievements! If they made the collecting things more difficult then I would maybe be a bit more inclined to say they served a purpose – but they are easy, in the same types of locations and it was a drag collecting them all.

Then there are the other really stupid achievements like the smash up x amount of things with a carriage… which even if you played the entire game through smashing everything in sight you wouldn’t be at 50%. And – isn’t the point of Assassin’s Creed not to draw attention to yourself?

There were some really, really lazy elements to the gameplay that were thrown in with no care at all and had it not been for the characters and location work, it would have completely ruined the game.

Assassin’s Creed as a Series

That last point brings me onto my conclusion perfectly. I have Assassin’s Creed Origins in its wrapper and recommended by my brother who writes the Subtext reviews. If it wasn’t for the Frye twins, the cameo story lines and my general love of all things steampunk and Victorian London, I probably would be writing a very poor review of Syndicate.

Against all my pre-judgements, Syndicate actually surprised me and was enjoyable despite its glaring flaws. But; I am not sure how much of that is down to the specifics I mentioned above. My suspicion is that taking away the Frye twins and Victorian London and I am left with a game that hasn’t really learned much from its original incarnation and that kind of makes me not want to play origins… because I don’t want to play games that are boring and repetitive.

I have a feeling both will prove to be bad decisions… but we shall see.