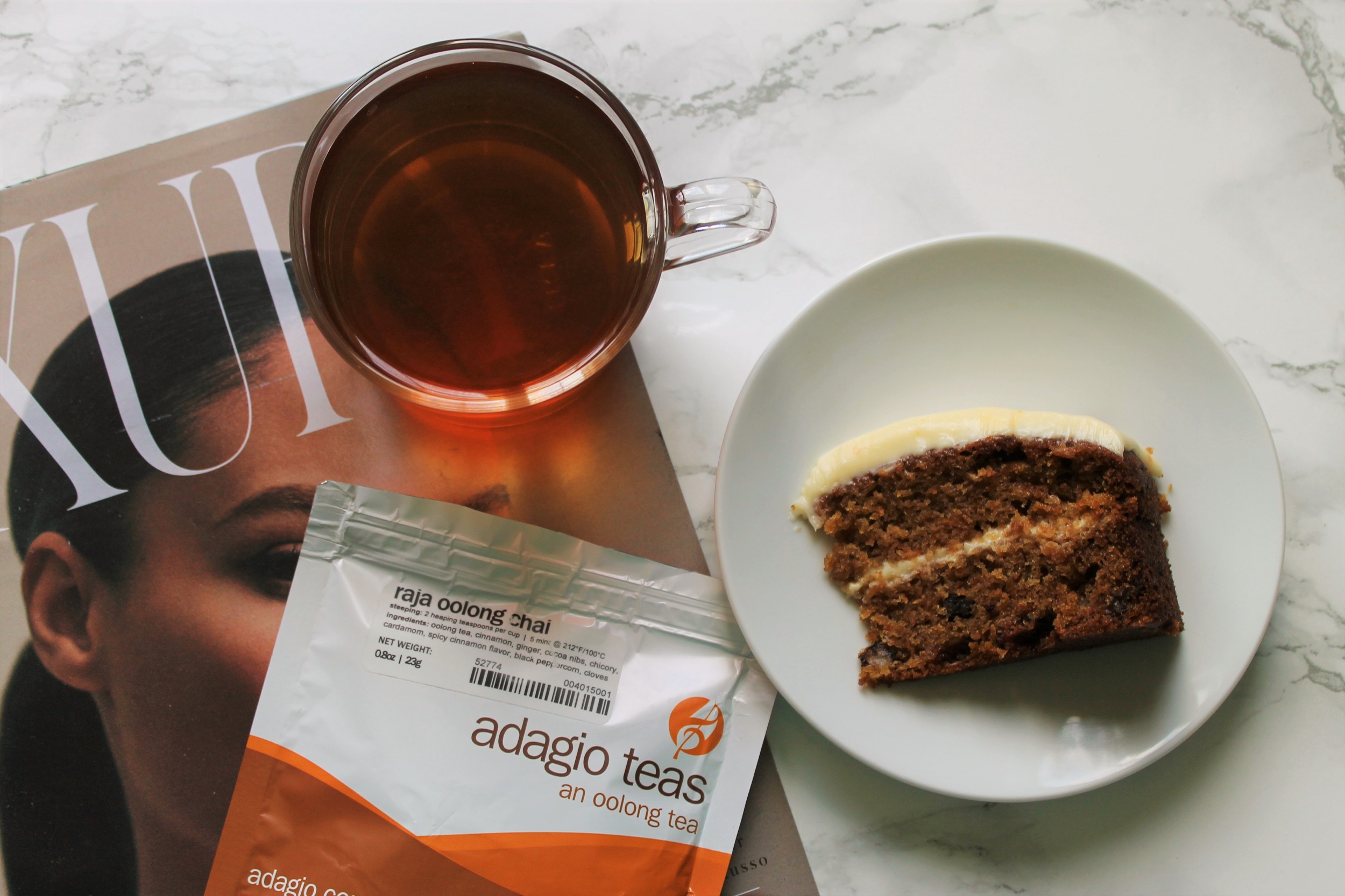 Sometimes you come across a tea that sounds quirky and delicious… but is actually the same old blend renamed. Other times, you find an interesting sounding tea and it’s just too bizarre to be enjoyable.

This tea is just a little bit different with those familiar masala chai spices to keep your feet firmly planted on planet Earth. I thoroughly enjoyed this tea and I know that any chai lover should have a sample in their tea cupboard.

Well isn’t this a hug in a mug. Adagio Raja Oolong Tea is very soothing to sip with a brown sugar sweetness that reminds me of treacle. Great for sipping in cold weather. 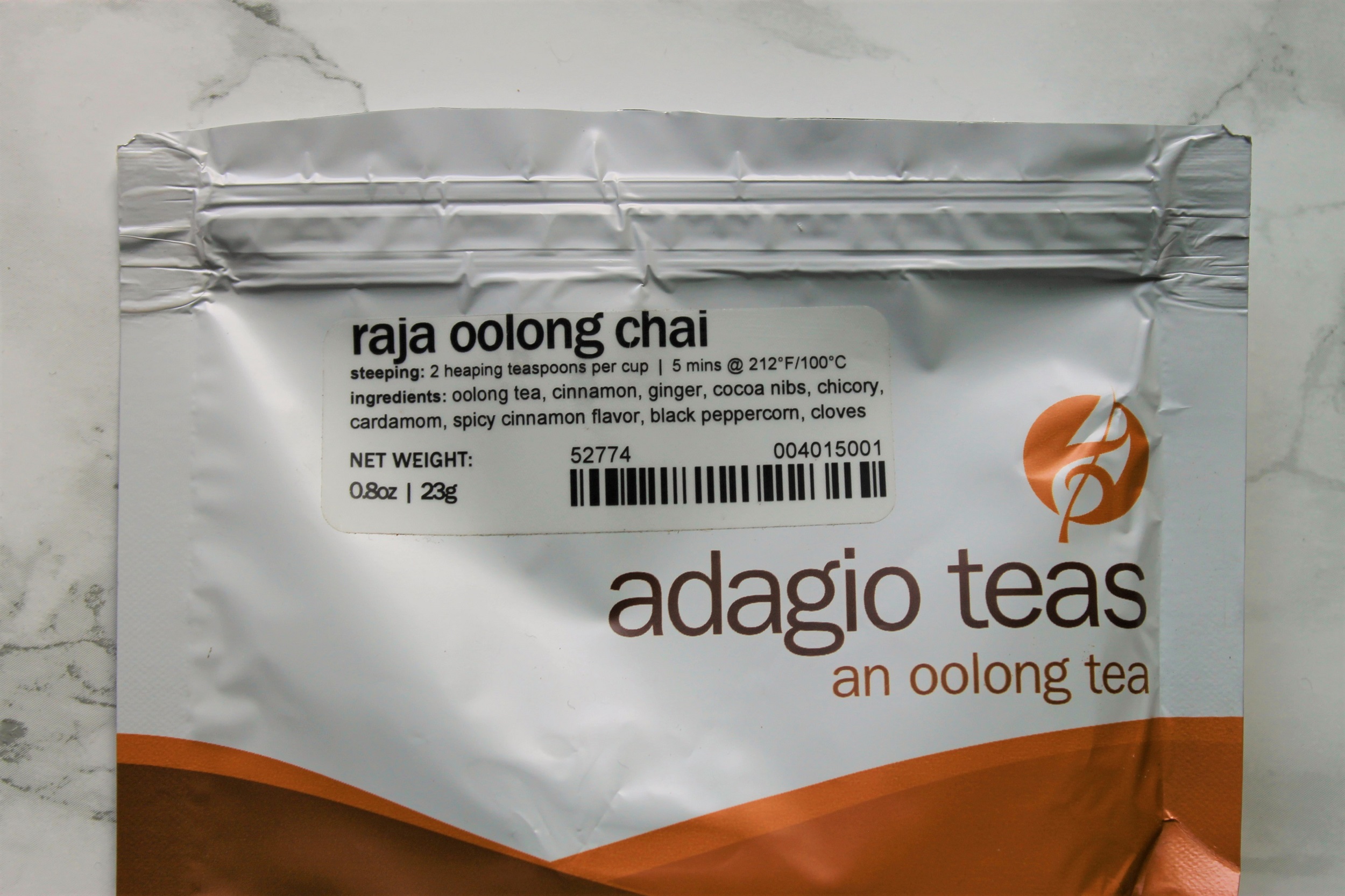 Opening the packet I’m hit with the usual chai suspects. Musty spice notes of clove, ginger and cinnamon tease my nose with a tingle of dust. So far, so good. Examining the dry leaf, it doesn’t seem too adventurous at all. If I didn’t know this was oolong leaf instead of black tea, I might not have realised.

It brews into a light brown colour, with a thick and syrupy texture that holds bubbles of dust at the surface until I blow the steam away. By the time I’m halfway through the cup, there’s a fine layer of dust at the bottom.

The flavour matches the wet aroma, which has an interesting earthiness underneath the typical warmth from the ginger and spices. It reminds me of wet leaves on damp earth. Combined with a brown sugar sweetness that reminds me of sticky treacle, it’s not at all unpleasant.

An unusual, but nonetheless delicious, tea. 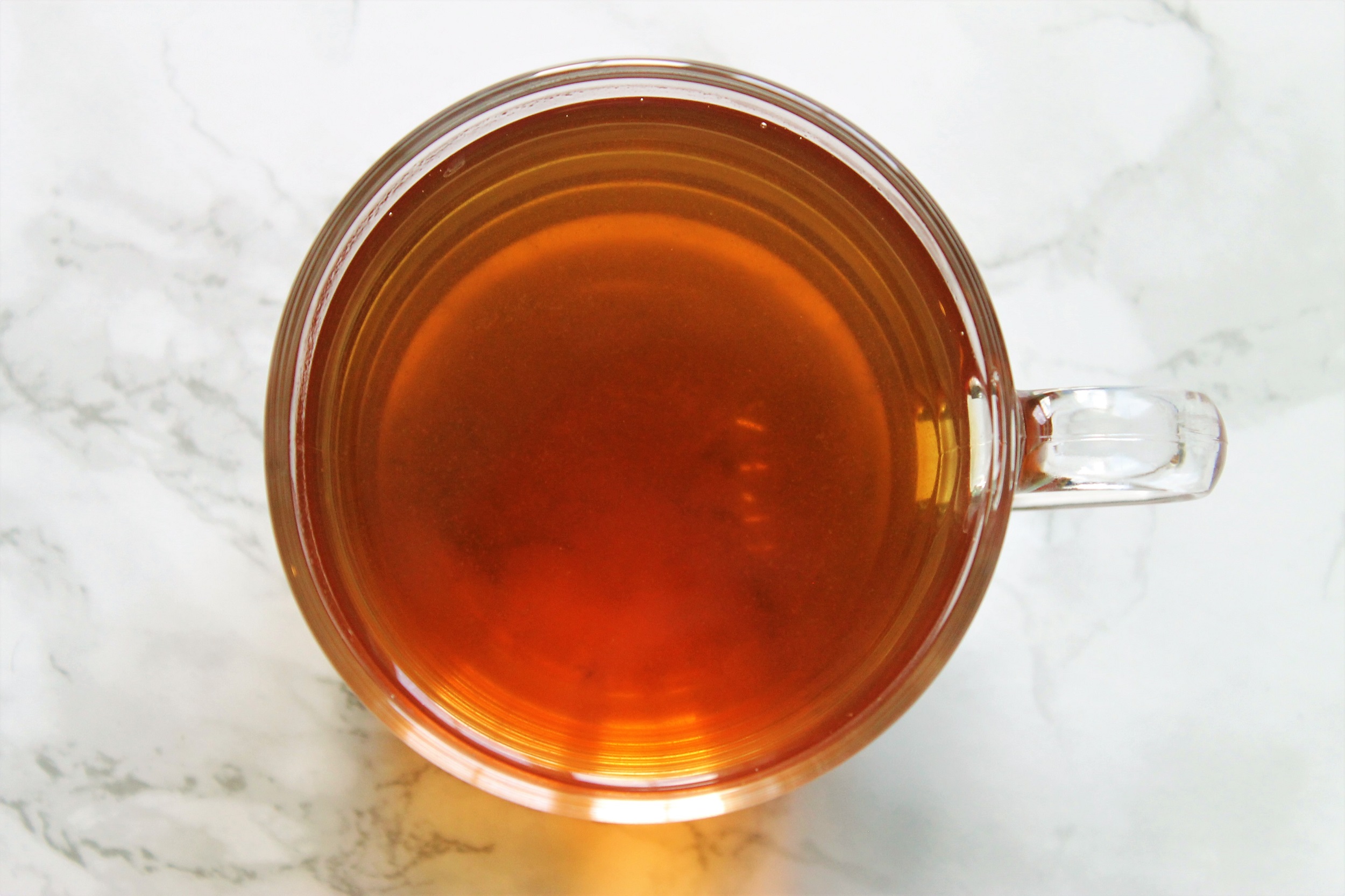 How to Brew Spiced Oolong Tea

Adagio’s recommended brew time for their Raja Oolong Chai blend is 5 minutes at 100°C, using 2 teaspoons of loose leaf. I followed this exactly and was pleased to find that the boiling water didn’t scorch the tea and the brew time was just about perfect for me.

If you like your spiced chai with milk, brew for a few minutes longer or add an extra teaspoon of loose leaf to strengthen it.

I enjoyed drinking this after lunch with a hearty slice of carrot cake (yep, homemade by yours truly) but you could enjoy this at any time of day, except evening. It is caffeinated so avoid it just before bedtime.

I’m reviewing 1 Adagio tea per week in the run-up to Christmas (and probably into 2020 too) because they very graciously sent me a super large box of tea samples to try. Having reviewed most of them by this point, I’ve developed a level of trust and respect for Adagio UK teas. 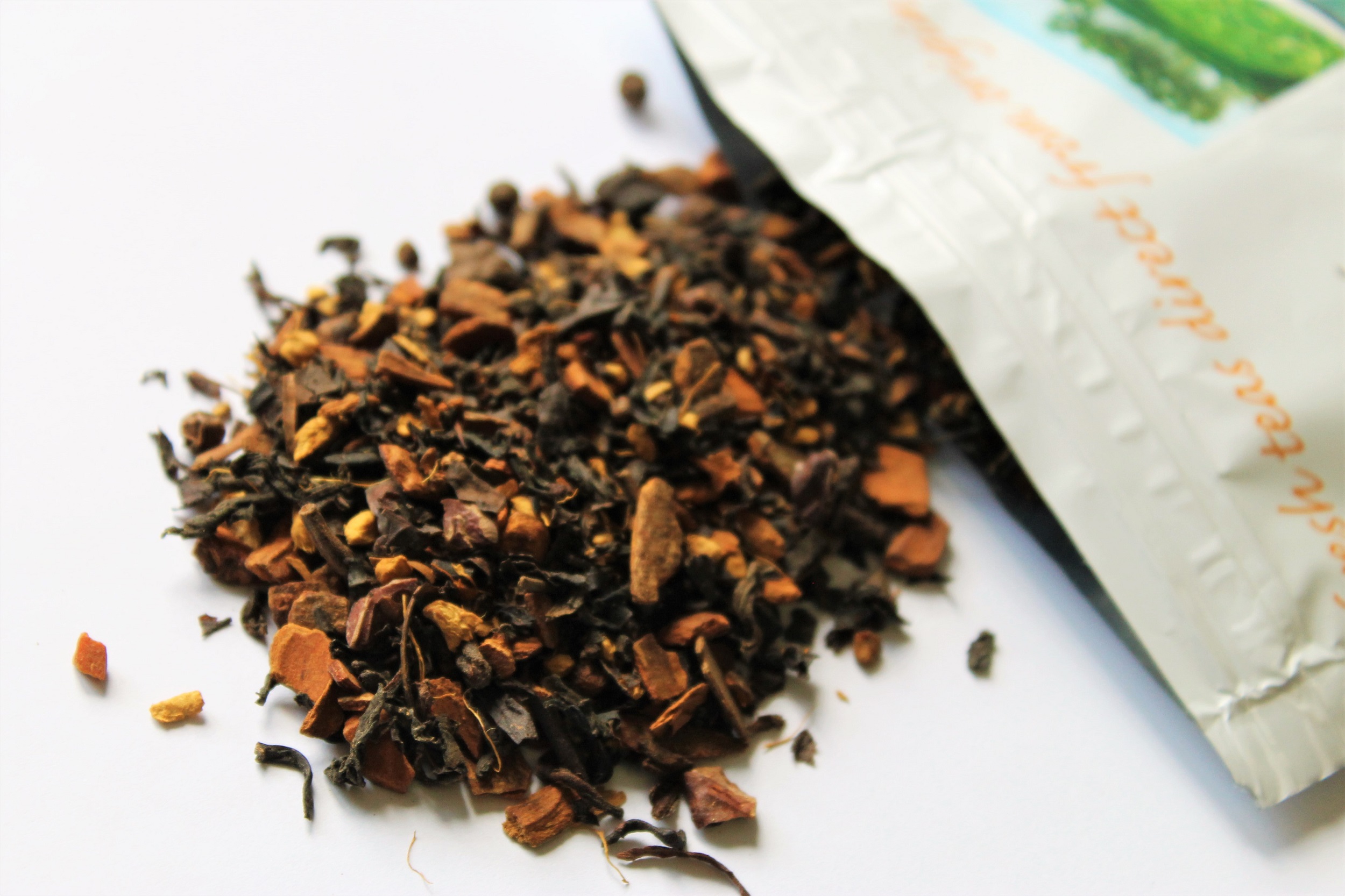 You can steep these loose leaf Adagio teas multiple times to get your money’s worth too.

Yes, yes and yes. I do recommend this tea. With a 3.2 review score, you might think it’s not all that good, but you’d be wrong. It’s not ground-breaking and it’s not making me go “wow” with every sip, and yet this tasty little treasure will be enjoying a semi-permanent spot in my tea cupboard over the winter. 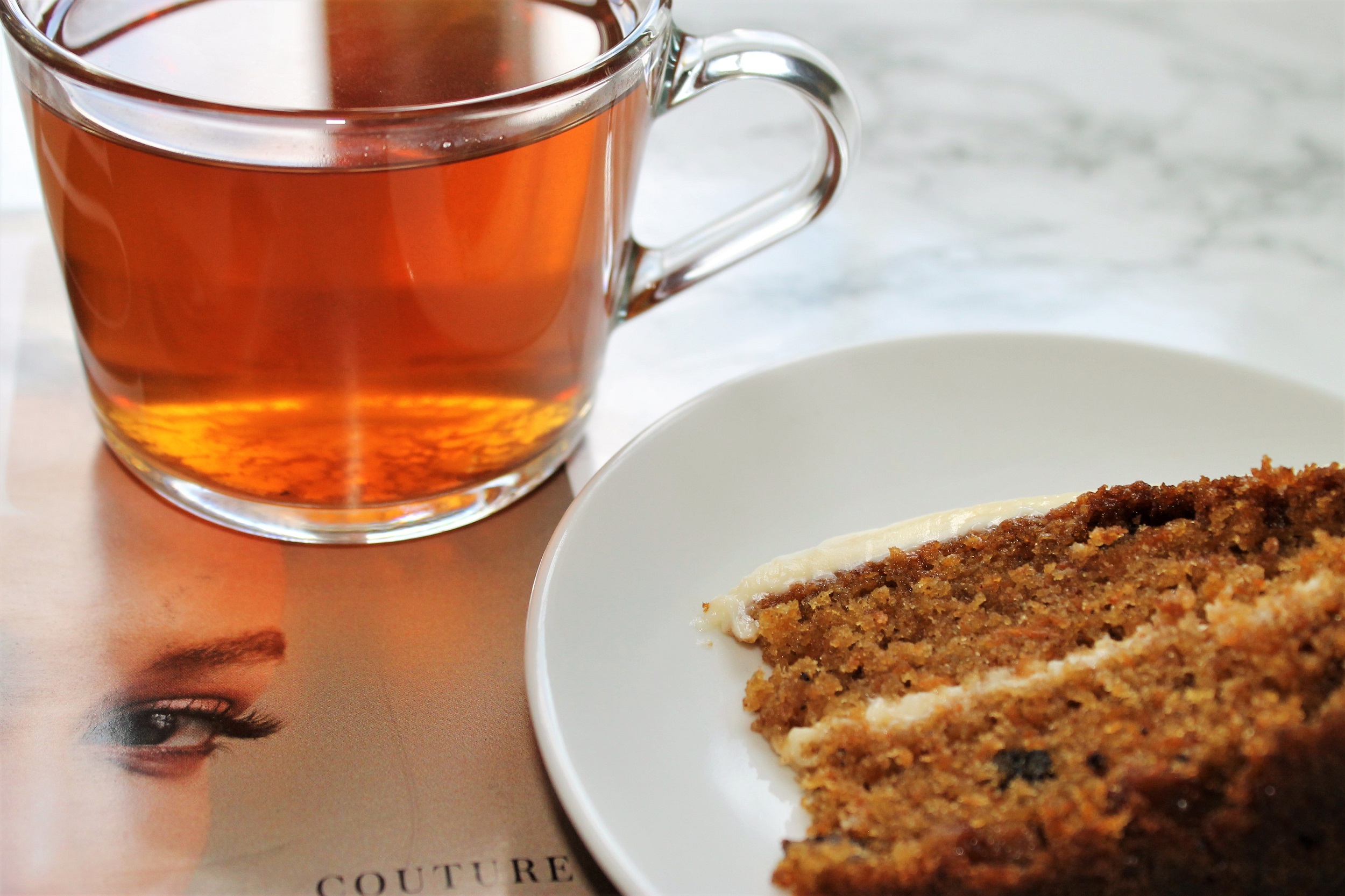 If you like the idea of a chai tea that isn’t a super heavy black tea with overpowering spices, then you’ll also love my review of Adagio Green Chai. It’s even lighter than Adagio Raja Oolong Chai but with just enough spice to add some Christmas spirit.