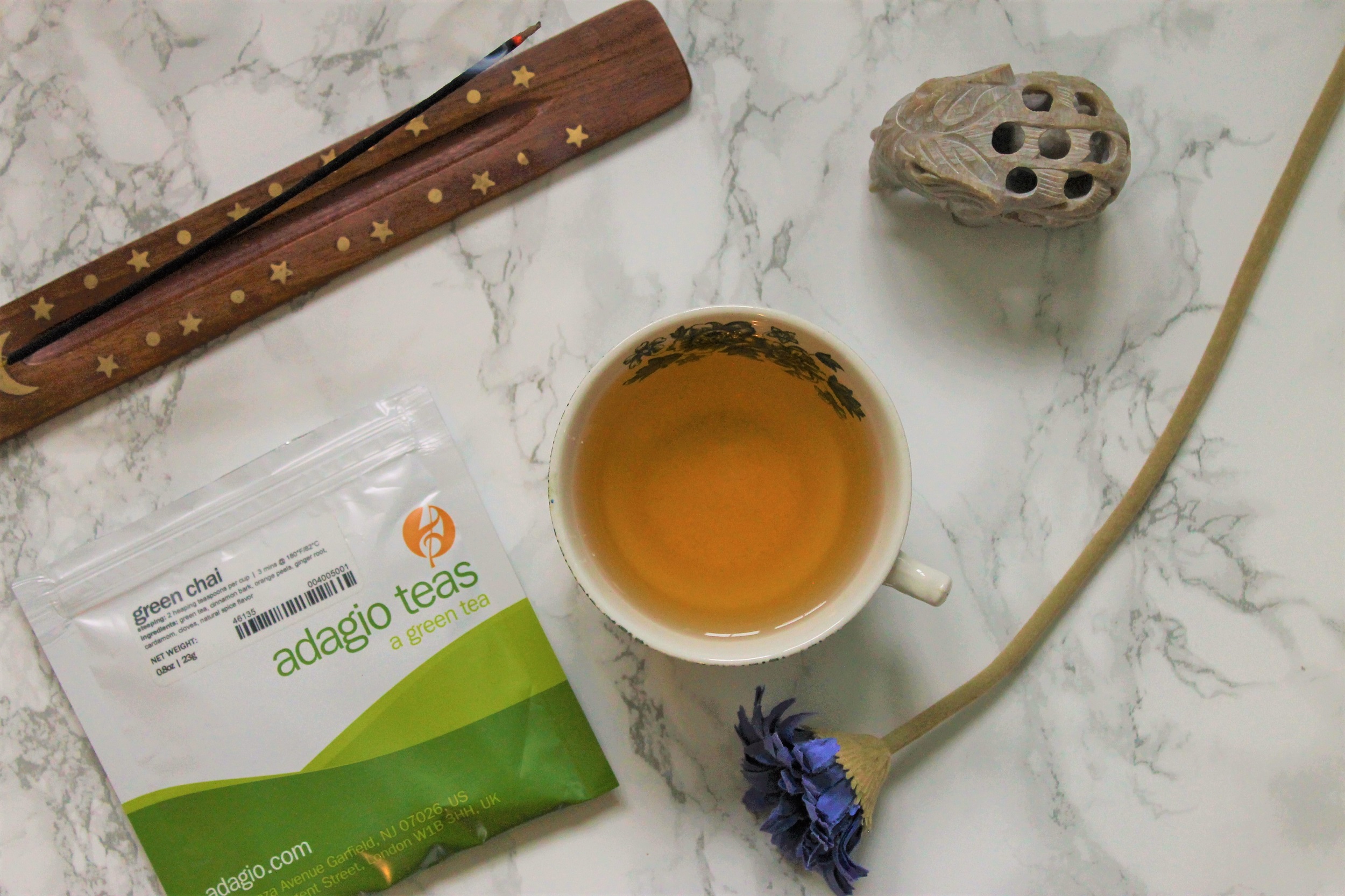 This is one of those Adagio teas that is blended to perfection. Green tea is not the usual base for a chai, as black tea tends to work so much better with complex spices. But Adagio are genius. They’ve added pops of citrusy orange and upped the floral cloves to create a very light yet undeniably chai green tea. It just works.

This is my full review of the tea, including tasting notes and a few tips on how to brew it.

Adagio Green Chai at a Glance

A lovely, light and refreshing chai tea that doesn’t swamp you in heavy spices. The orange notes sing through with the grassy green tea to make a light chai you will love brewing in the evenings. 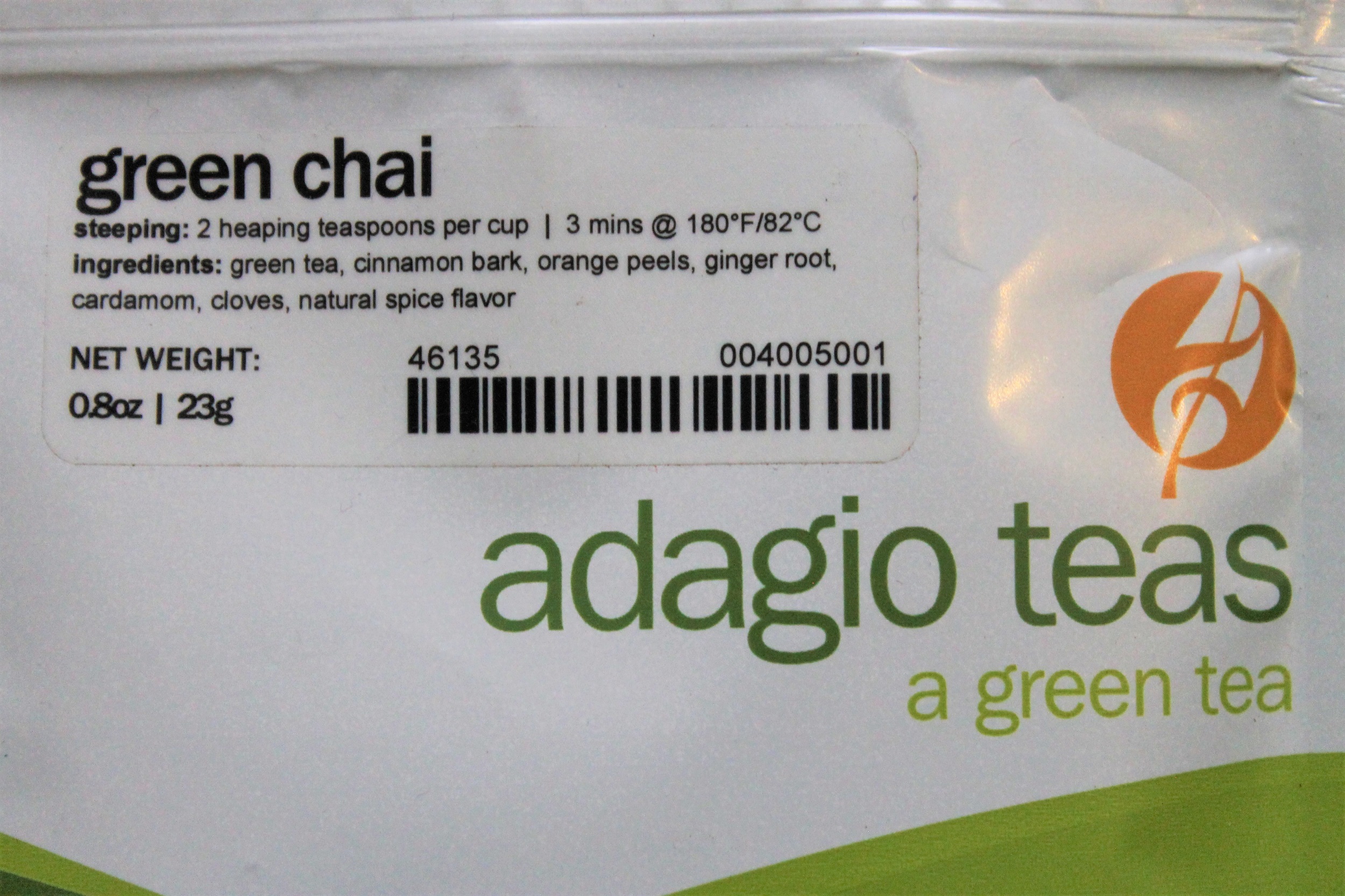 There’s a very intense aroma coming from the packet the moment you’ve opened it. If it turns out you don’t like this tea, you could probably reuse it as potpourri! Jokes aside, it’s an enticing aroma. The spices are so strong it’s almost smoky with the incense-like aroma, lifted with cloves, cinnamon, and spices.

That first sip is divine. The green tea is grassy with a hint of hay and light floral notes from the cloves. The orange also makes an appearance, particularly in the long aftertaste. What really stood out, however, was the surprisingly thick mouthfeel. It rolls over your tongue and coats your mouth in citrusy smoothness.

A very light and soothing chai tea that’s really nice to drink on its own or to wash down dessert. 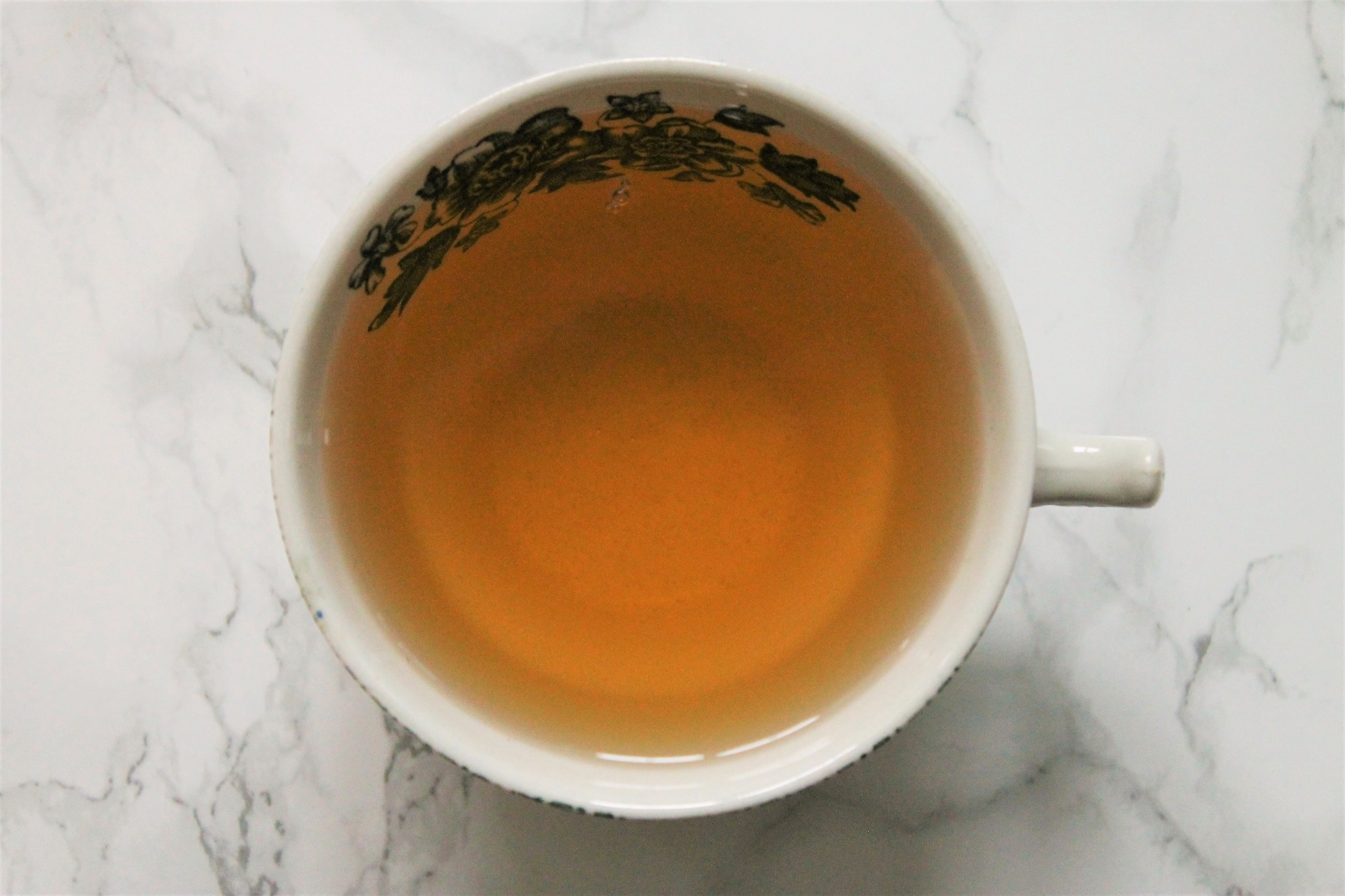 How to Brew Green Chai

Adagio Teas instructions for their spiced green tea are to brew 2 heaped teaspoons for 3 minutes at 82°C. Following these instructions leaves you with quite a weak green tea that’s pleasant for a quiet evening by the fire.

This tea seems to handle longer brew times quite well, so don’t worry too much if you end up brewing for 4 or even 5 minutes. Despite what the aroma would lead you to believe, the spices are actually quite subtle in flavour.

Adagio sent me a large box of teas to review in the run-up to Christmas. Tucked into the corner of the box was a 23g sample bag of Green Chai.

The packaging is great. Although the bags are plastic, they do seal airtight so your tea will keep for longer. I also like that the brewing instructions are clear and detailed, telling you how many teaspoons of tea leaves to use as well as temperature and brew time. 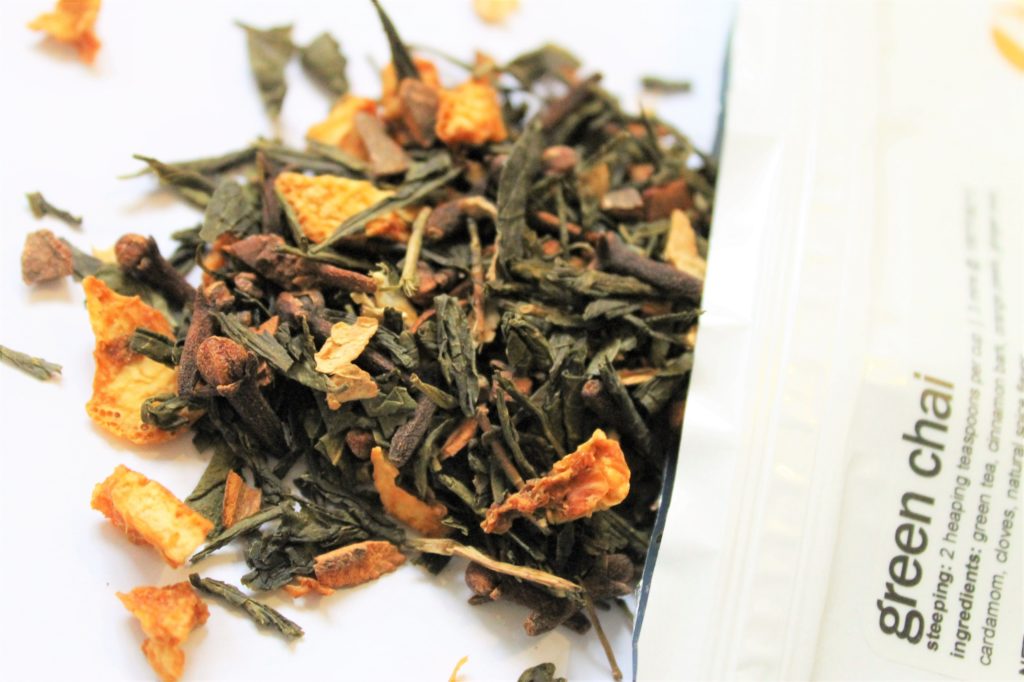 As for the actual tea leaves, the quality seems good to me and I’m always happy when I see whole cloves and chips of cinnamon bark floating around. There is a small amount of natural spice flavour included.

Overall, this is a good tea. Well-balanced, nice flavours, high-quality and very forgiving if you tend to over-brew. Just remember not to use boiling water and you’ll be fine. I recommend ordering a sample size pack first, before buying a vast amount. 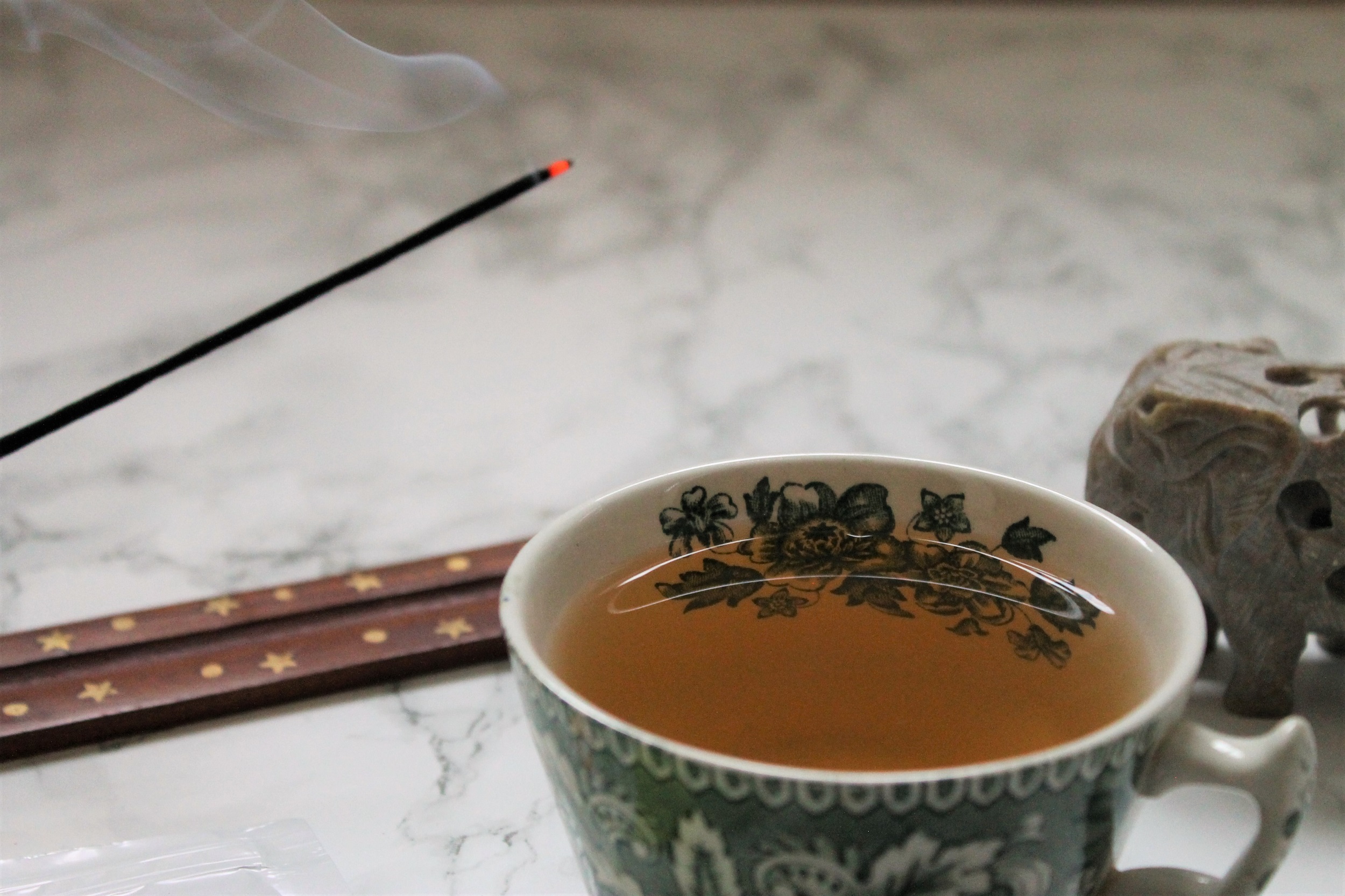 I review teas every other day here at Immortal Wordsmith, so if you’re searching around for a new tea you’ve come to just the right place (make sure you subscribe). Similar to Adagio Green Chai, my review of Basilur Moringa tea will make you crave a light, refreshing cuppa.