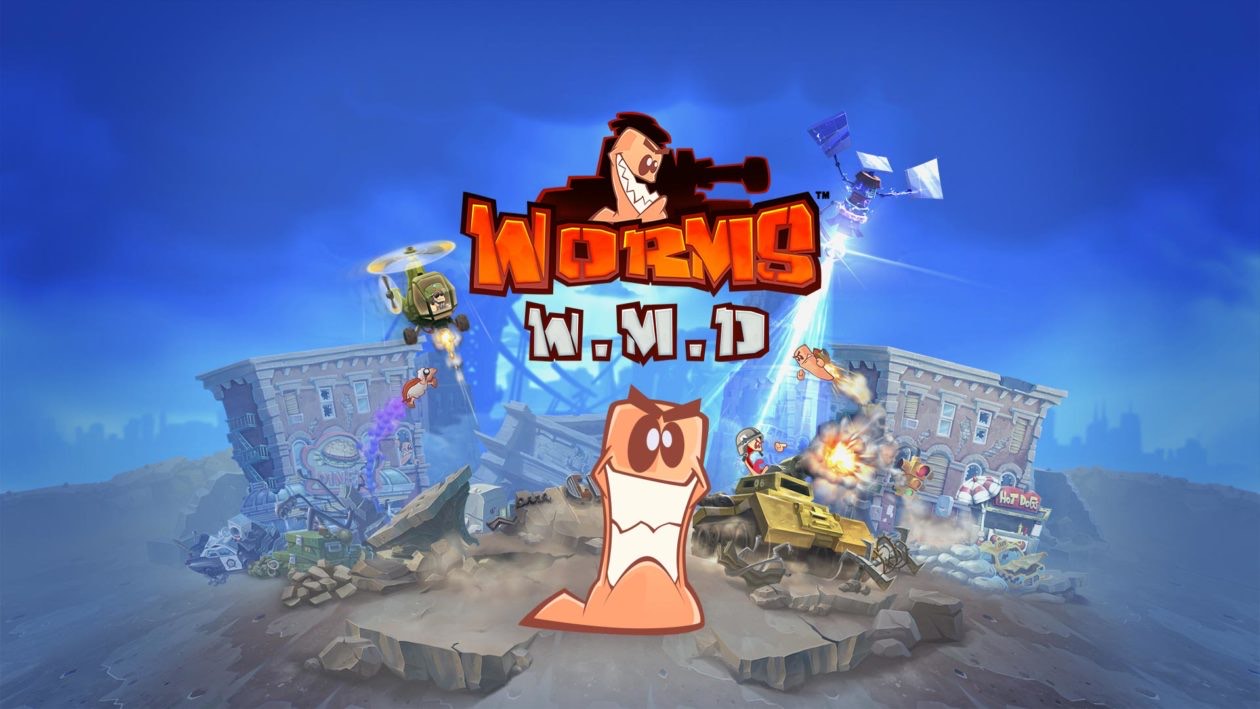 I am not ashamed to say that I have played many of the worms titles over the years and my favourite so far has been Worms Armageddon. When I saw that Worms WMD was available on my games pass (which I will review separately) the nostalgia crept in and I had to download it and show it to my four-year-old son as well as give it a spin.

What did I think? Well, mostly good thoughts…

How Has Worms WMD Changed from Its Predecessors?

Well, the great news for Worms fans is that Worms WMD has scrapped the 3D battle system that featured in some of the newer titles. Instead it is a completely 2D affair, the way worms should be. It was also as responsive and easy to pick up as the original games with a lot more polished game modes and vehicles.

As a single player game, Worms is fun, as addictive as ever and just silly enough to make you grin from start to finish. Progressing through the story and mission modes unlocks lots of goodies and the scenarios and gameplay are new enough to seem fresh but not too new that you might think it wasn’t a true Worms game.

There are a few problems with the game which I will get to further down. For the most part though, you can easily kill a day or two playing through the game, clocking up some “easyish” achievements and unlocking some cool weapons along the way.

In the past, Worms games have been crowned by their multiplayer mode and I remember endless hours spent playing against my brother and friends on Worms Armageddon. The multiplayer mode is a bit of a different animal on Worms WMD, and it’s not as good as it should be.

First off, there is the one vs one online ranked battles. I played one, which I won, but didn’t really feel as though I got anything from playing more. There was no incentive for me to play on and risk my undefeated record of 1-0. What they should have done is make online exclusive rewards instead of just the normal offline experience rewards you get anyway. I don’t know, the online ranked battle seemed kind of boring with not much effort put into it and the fact it is 1v1 makes the game less chaotic and unpredictable – which for me is what makes Worms fun.

Offline the multiplayer doesn’t fare much better, although surprisingly my little boy managed to pick up the games controls with ease and a few mistakes and dead worms later and he was dropping donkeys on my head like a pro.

Worms WMD is harking back to the glory days of worms and the levels, designs and weapons (for the most part) are every bit as good as the good ol’ days.

The control system hasn’t changed, which means any fan of the series can pick it up. The new vehicles give a different way to play and the buildings make for a bit more strategy, especially when you can’t see where enemy worms are because they are hidden in buildings.

The weapons are good with the familiar favourites like the carpet bomb, the holy hand grenade and the concrete donkey all making notable appearances.

What’s Not Great About Worms WMD?

The game isn’t silly enough. Some weapons don’t appear on the game or if they do, I haven’t unlocked them yet despite hours of playing. The French sheep strike just doesn’t seem to be on there.

The dialogue that seemed so funny on the old games has been replicated and has either aged poorly or the new game just doesn’t have the same ring to the voice acting. Everything behaves very responsively which is good if you take your worming seriously, but there was always that fear playing the old games that you would do something ‘Stupid!’ because you overreached with your ninja roping abilities or fired your Bazooka too prematurely.

The buildings give you premade bases as well which takes away the strategy element of bedding in with the blowtorch and using girders as shields. Hunkering down and waiting for sudden death to vanquish your foes. Lastly, the vehicles do add a bit of value to the game initially but have a very short shelf life, once you have used them once or twice you won’t really feel they are either fun or necessary.

For a game that makes light of the “Weapons of Mass Destruction” phrase, it is a bit of a damp squib. It is very good fun for a few days but then the novelty wears off and you will either be digging out your retro console and old Worms games or you just won’t be playing anymore.

With Team 17 being so keenly venturing into the mobile gaming world it might be that console games are just not as lucrative to make especially with production costs being higher on a console. That has resulted in a bit of a poorly thought through console game that gives us enough of what we want to make it worthwhile for a bit but not enough of the good stuff to keep us hooked like the old titles did.

Hopefully as online gaming and streaming becomes more of the norm, titles like Worms will get a new lease of life to give fans what they want. Mobile Worms might make the most money, but it simply isn’t as playable or fun as a console version. This is a common issue of our times though where developers are too concerned with obscene mobile profit margins and less concerned with their fan base.

In the end, both will come to an end unless developers start creating proper games again.