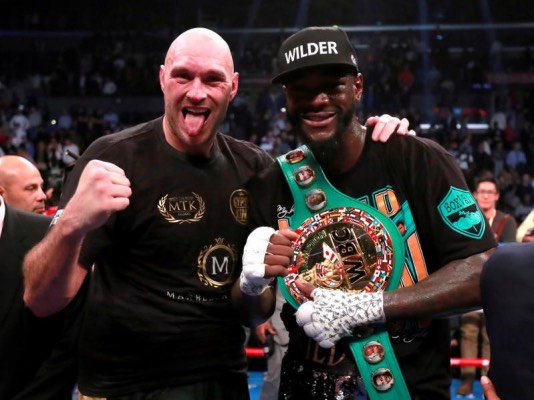 We are at a point in heavyweight boxing where the landscape is changing, where big business is superseding the sport and where fighters are increasingly protective of their records, always looking to avoid losing their 0. Tyson Fury has long been one of the major figures in heavyweight boxing and even during his two-year hiatus from the sport he was generating headlines and calling out boxers to come and fight. Following a comeback which saw him taking on the WBC champion Deontay Wilder, Fury was in a position where anything was possible for him in 2019.

But there are major problems that Tyson Fury needs to overcome.

Where Exactly Does the Gypsy King Fit In?

In true Ali fashion, abreast a resurgent and thrilling comeback, Tyson Fury donned the moniker of “The People’s Champ”, except he isn’t. While it is certainly true that Fury does have a large fanbase, to be the people’s champ you have to be loved by the most people. That accolade goes to Anthony Joshua by a country mile, with almost 4 times the following across social network platforms and even non-boxing fans flocking to see him. It is unquestionably clear that although popular (more so now than ever before), Tyson Fury is not “The People’s Champ”.

What about being the boxer that steps up to the plate? Fury arguably has done so twice by fighting Klitschko in Dusseldorf and Wilder in Los Angeles, both away from home and both against very credible opponents. He won both fights in my opinion but for his efforts the record shows a victory and a draw.

Is he the champion that goes anywhere to fight anyone? Well, no he isn’t.

Fury has yesterday pulled out of an immediate rematch with Deontay Wilder, this means that he isn’t prepared to go anywhere to fight anyone as he says. I am absolutely sure he had his reasons and there were likely contractual issues (specifically around rematch clauses) that meant the fight was not advantageous to Fury. This is a far-cry from the fighters of yesteryear who would literally go anywhere and fight anyone, remember Zaire and Manilla?

In terms of the champ that steps up, right now, strange as it may sound, I have to give that nod to Deontay Wilder, who notoriously ducked fights in the past, he has now found himself at the raw end of the WBC (whose belt he holds) that want to create fights that the fans want to see. This means he has been and will continue to be ordered to make fights. To Wilder’s credit, in these circumstances, he is not backing down and carving an easy path for himself, unlike Anthony Joshua, who cherry-picks defences (more on why this is in a future article).

All this begs the question of where is Fury in all of this? Well, he is with ESPN; signing with them after negotiations with Wilder were seemingly unfavourable in an effort to bolster his power in those negotiations. But; the ESPN deal has in fact hindered those negotiations and left Fury a bit red in the face, having to decline the Wilder fight against the backdrop of his own words.

He finds himself in a position of quite possibly being the highest paid fighter on the heavyweight roster (yes that does include Anthony Joshua, a cursory look at company’s house will show AJ doesn’t earn as much as he claims), but with no one to fight.

Fury claims his deal means that fighters will be approaching him and he can call the shots on negotiations, setting up the biggest and best fights. That is simply not true. Here is why;

It is quite likely that Fury will take fights with boxers on Toprank books that are rated around the top 25 mark. The likes of Bryant Jennings. Fighters who pose no real threat to Fury’s record and can generate money. Quite the opposite of fighting the fights that the fans want to see.

What About the Lineal Status?

The lineal heavyweight status is an accolade that all boxers should aspire too, but the truth is, most don’t. The lineage is shrouded in nostalgia and as a boxing fan, I absolutely class it as a valid title. Many boxing fans don’t though and beyond that, the casual fans wouldn’t even know what the lineal status is. With nothing physical attached to it (i.e. a Belt) the lineage is little more than an idea (a great one) and boxers don’t tend to like boxing for ideas, they prefer belts and money.

Yes, Tyson Fury is the legitimate lineal heavyweight champion, the man that beat the man that traces its roots all the way back to prize-fighter John L Sullivan. Does it really mean anything to most people? Not at all. It is sad to say that, but the absolute reality is that most fans and boxers don’t give credence to the lineage, and certainly wouldn’t go out of their way to challenge Fury for it as he says they should on countless interviews.

What does This Mean for Heavyweight Boxing?

It is probably great news for heavyweight boxing and not good news for Tyson Fury. Deontay Wilder will make a mandatory defence against Brazeale or Whyte, both of which he will be favourite. Freeing him up at the end of the year to focus on a mega-fight against Anthony Joshua for the undisputed crown. Providing AJ gets through Miller (which despite appearances is a stylistic nightmare for AJ and could prove a cherry pick too far). If not Wilder and Miller will be able to set up an all-American fight for the undisputed status.

Who wins? Anybody’s guess but if you asked me to put money on it I would back Deontay Wilder to come out victorious.

Where is Fury during all of this? Making lots of money with his big deals, fighting dossers. On the side-lines, looking in.