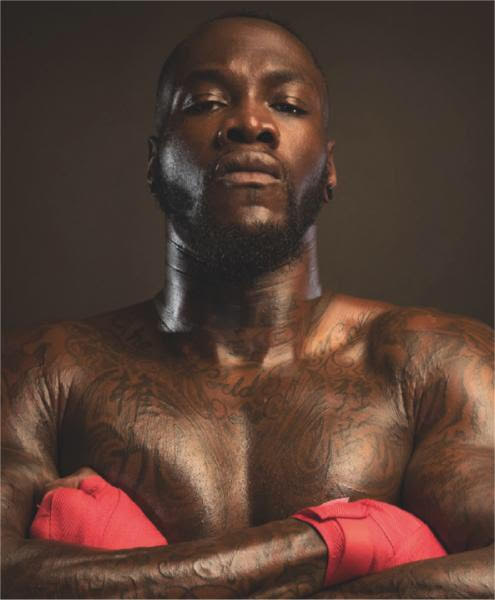 I recently did a bio/legacy post titled the Curious Case of George Foreman, so make sure you check that out after reading this!

I quite like the Curious Case moniker so I plan on making this a series! Today we are going to explore some very unusual things about Deontay Wilder.

Chris (my @theundercard counterpart) was deeply disappointed that rumours are circulating that Deontay Wilder is going to decline a $100 million – 3 fight deal with Dazn. A deal that would reportedly pay him $20million to fight Dominic Brazeale and $80million to fight Anthony Joshua twice for the undisputed heavyweight championship of the world.

At first, I was sceptical, thinking that Wilder must have been offered more from ESPN or Showtime/Fox in order for him to turn it down.

The truth after a lot of digging is that ESPN had offered (via Tyson Fury and Bob Arum) a 5-fight deal to Wilder (which is still under consideration) that would allow Wilder to fight exclusively on ESPN+ against four fighters of his choosing as well as a guaranteed rematch with Tyson Fury (When Fury chooses).

Showtime have no doubt put some form of package together that will have been put to Wilder and his team, though we don’t know what that might be at this time.

Let’s not kid ourselves here though, the ESPN deal is not going to be $100mil, if anything it is going to be significantly less and reports indicate that the ESPN+ package offered will pay Wilder a flat fee for the 4 fights of his choosing and a percentage based on subscription/viewing revenue. That flat fee is reportedly $3million.

The Fury fight itself would likely (though this is conjecture) be a higher flat fee and percentage deal but I doubt this will be much more than $10million. That puts the ESPN+ package at around $22million minimum.

The Showtime offer remains to be seen so any summation would be pure speculation.

Why This is SO Curious

Before I get into a bit more about Wilder and his team – it is important at this point to mention that up to this point across all of his fights, Deontay Wilder has not made $22million. Most accurate estimates put it at around $18million in total career earnings.

With that in mind, Wilder would be absolutely mad to turn down either Dazn or ESPN. But he looks set to turn down Dazn and it remains to be seen whether he declines ESPN.

The Dazn Offer Seems Too Good to Be True

I don’t know the ins and outs of the Dazn offer, and the information in the public domain is the headline terms and figures.

But; Dazn were going to pay Wilder $20 million to fight his mandatory? That is his career earnings to fight a fight he has been ordered to fight.

And then $40million per match with Anthony Joshua?

If this is the case then Dazn have more money than sense. First off, Deontay Wilder isn’t worth $10million a fight let alone $20million or $40million. He did reasonably well from the Fury fight taking home between $8million and $10million, but a lot of that success is attributed to Fury and his ability to market a fight.

The running joke building up to the Wilder fight from Team Fury was that no-one knew who Deontay Wilder was in his own country. Frankly, Deontay Wilder isn’t a big name in the commercial aspect of boxing and he isn’t a PPV draw.

The Numbers Don’t Add Up

Another reason this offer makes no sense to me is Dazn expecting that AJ vs Wilder will generate a minimum of $80million per fight (we have to at least expect AJ is getting 50%). Anthony Joshua’s must successful fight on the Dazn thus far was against Vladimir Klitschko gaining a staggering 16,000 views in the US.

Let’s assume that Dazn gets exclusive broadcast rights for both the AJ fights with Deontay Wilder (we will ignore the Brazeale fight as there is no way Dazn is recouping costs on that $20million).

Dazn, monthly subscription cost is $9.99. Both AJ fights will likely happen within a 12-month period, so we will assume an annual figure per sign up of $119.88. That means fans can sign up to the Dazn for 12 months and watch both of the fights between Wilder and AJ.

That means that Dazn will need to sign up 1,334,668 people for 12 months, just to recoup the cost paid to both fighters.

To put that into perspective, that is almost as many sign-ups they need to their platform as ESPN+ has entire subscribers across their streaming platform (2,000,000)

This begs the question? How are Dazn going to break even? Let alone make a profit! It is also worth noting that the Canelo fight streamed on Dazn did worryingly low viewing figures.

Dazn have offered to spend $180mil (including Anthony Joshua’s split) to sign Wilder to three fights and not only do I not see how they could have sustained this cost, but also, I don’t see why they valued Wilder (or Anthony Joshua, who has never earned $40million per fight) at that amount.

Conclusion on the Dazn Deal

I don’t think we are being given the whole truth around this deal and I hope the press conference on Tuesday offers some clarity. The headline figures seem excessive and for argument sake, if that is what they’re offering, how sustainable is Dazn with all these reported “huge deals” and a less than ground breaking number of current subscribers. Again, for argument sake, say Dazn has offered those figures, why the hell is Deontay Wilder turning them down?

This is where we get into a bit of detail about the Wilder team. First and foremost, on the ESPN+ deal, Wilder can fight who he wants and get paid $3million at a time. That’s a jackpot – he could fight absolute nobodies and net himself the same amount as he earned fighting Louis Ortiz!

His record grows, his title is safe, and his all-important KO rate grows too!

I don’t believe Wilder or his team will take this deal though, mainly because it means he is accepting less money to fight than Tyson Fury who is ESPN’s chosen heavyweight fighter. Wilder’s deal is for the ESPN+ streaming platform whereas Fury’s ESPN deal is across all platforms, effectively making him a household name to their 90million plus viewers.

It will be a bitter pill to swallow for the current WBC Champion, that he is not worth the coverage or high pay grade in his own country than one of his biggest rivals. For that reason, I suspect he will turn that deal down also – though with Deontay Wilder, you never know what is going to happen.

The Man in the High Castle – Al Haymon

This is where the Wilder narrative gets really weird! Team Wilder consist of Shelley Finkle and Al Haymon. Both incredibly powerful men in the world of US boxing. Wilder seemed all set to take the Dazn deal, made a positive statement and then in a matter of days that changed and management got involved.

It gets stranger that given that Wilder has never earned that kind of money, there is a sense that he won’t have many opportunities to earn that kind of money in the future. ESPN won’t be offering Wilder a Fury style package anytime soon and Dazn will think twice about publicly offering any kind of deal to Wilder in the future if indeed this deal does get declined.

The question is, what exactly are Wilder’s team holding out for? At 33 with 41 fights to his name he has a lot of mileage on the clock. Having had at least 7 surgeries on his formidable right hand he definitely won’t be having 40 more, in fact, they will be lucky to get another 10 top level fights out of him. What the hell are they waiting for?

One of the reasons this deal might not be appealing to Al Haymon is that by ceding Wilder to Dazn he is giving a rival promotor extra traction in the US market. Haymon is an almost mythical promotor, controlling a huge stable of fighters that all pledge blind allegiance to him. Rarely if ever seen, Haymon has a pied piper style control over his fighters and this move by Team Wilder could simply be a political move in a longstanding game of chess.

Perpetuated by Wilder, Anthony Joshua and Tyson Fury (with the former being most guilty) there is a rather dirty undercurrent to affairs that is being played out. Fans from all camps shout duck the minute something doesn’t go as expected. Wilder himself has vocally called AJ and Fury duckers on numerous occasions in the last month alone.

Poised to decline this deal to fight AJ, the duck brigade is out in force, quacking away about who is ducking who and to be honest, it has gotten a bit tiresome. We never will truly know if any of the fighters are ducking one another, or if it simply isn’t the right time because things are going on behind the scenes.

The Wilder Team and Ducking

While it is incredibly unfair to accuse Deontay Wilder himself of ducking (or Anthony Joshua and Tyson Fury), one does get the sense that all is not right in the Wilder camp. Time and again they opt to shy away from fights that they don’t feel like they can absolutely win.

Personally, I think Deontay Wilder is a phenomenal boxer, and, given the chance he has a great shot at becoming undisputed champion. It seems his team aren’t as confident in Wilder’s abilities as I am however and often look to steer him away from fights that are too difficult.

You might argue that Wilder fought Ortiz and Fury and those were big risks for his team to take, except with Ortiz the fight was ordered by the WBC so Wilder HAD to fight. In the case of Fury, he was coming back from a two-year, drug fuelled, depression ridden, stuff-your-face and gain 10 stone lay-off. To all concerned a win over Fury would add value to Wilder’s resume and was no concern, very few people expected Fury to turn out the kind of performance that he did.

From an outside perspective I have drawn 3 very odd conclusions to the curious case of Deontay Wilder.