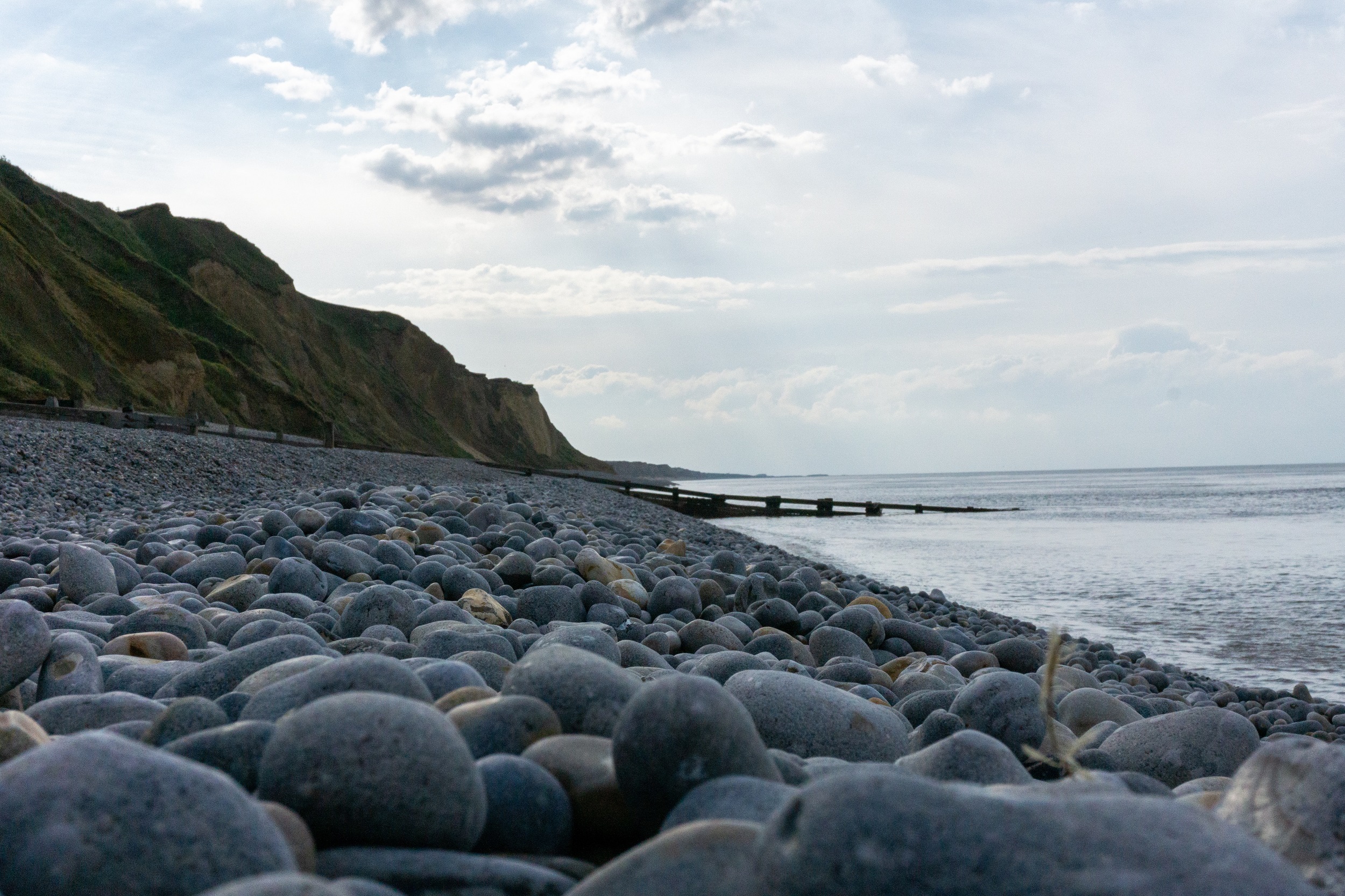 A few miles from the seaside tourist town of Cromer is a smaller, but no less impressive town called Sheringham. It lacks the sandy beaches that Cromer offers but has plenty of charm and things to see for those looking for something a little quieter.

This guide gives you the history of Sheringham as well as some helpful travel tips to make the most of your day.

If you happen to chance upon the community history board, you will notice that the town traces its roots back to around 1360 when the All Saints Parish was built. But for those a bit more inquisitive, you will realise the noticeboard doesn’t track the history completely and the actual town was settled over 300 years earlier.

It is mentioned in the Doomsday book of 1086 which lists it as a town called ‘Silingeham’ and then as is common and languages develop, the town’s name evolves into Siringeham by 1174. In the Book of Fees (a landholding ledger) of 1242 the town has a more familiar Scheringham. It seems the C was dropped from the name to form its modern usage.

The town comprised of two parts which is still slightly evident today, Upper Sheringham and Lower Sheringham. The upper part of the town dedicated itself to farming the abundant and fertile countryside around the town whilst the lower part was a fishing community.

Unfortunately, a lack of record keeping meant that from 1360 when the parish was built to the 1700s, there is very little information about the town. It’s nice to imagine that the farming and fishing communities flourished during this time and life carried on as it always had done – but the truth is probably much different, and I am sure there were periods of hardship for the Sheringham community.

Sheringham from the 1700s

By the 1700s the community had grown, and the town had expanded its productivity beyond farming and fishing. In 1786 a paper mill was opened and functioned until 1861, the site of which is marked by a town plaque and is still standing today (although used as a different business now).

By 1813, the wealth of the industrial revolution had begun to seep through to more rural communities and Sheringham was no different. The Upcher family bought the land around Sheringham in June 1811 and in 1813 the foundation was laid for the Sheringham Park – considered the best example of Humphry Repton’s work today.

Sheringham Hall stands on the land purchased by the Upcher family, and it was held for a few generations before it was passed over to the National Trust. The hall was completed in 1839 and was not inhabited by the original buyers as Abbott Upcher had died at the young age of 35 before it could be competed. His eldest son Henry Ramey Upcher took residence.

Meanwhile in the town around the Sheringham Park estate, life was also improving, and fishing in particular began to yield much higher profits. The north Norfolk coast is famous for its crabs, lobsters, and whelks.

During the 1800s, this newfound wealth helped develop some of the town’s landmarks that are still used today. In 1862 a water reservoir was built that is now used as the Sheringham Clock Tower and the sewers and sea walls were built a bit later in the 1870s.

In 1887 the railway line was built which again improved community life significantly. The railway allowed farmers and fishermen to market their produce and fish further afield and also bought in waves of tourists. Just two years later the Sheringham hotel was completed alongside the football club.

The tourist industry continued to flourish, and the existing hotel had trouble meeting demand, leading to the construction of the Grand Hotel in 1898 that stood until 1974. In 1899 the Burlington Hotel was built and is the only surviving hotel from this era.

Sheringham in the 1900s and the War Years

Upper Sheringham still exists but is a much smaller parish community around the original All Saints Church. Lower Sheringham no longer exists and today it is simply called Sheringham.

Perhaps one of the most surprising facts about Sheringham is that during the First World War it was the first British town to have been bombed. The bomb was dropped by a German Zeppelin L4 and didn’t detonate, instead crashing through the roof of a house. The remains of the bomb are on display in the Sheringham museum.

World War Two proved to be a much less eventful time for the community and the town was mainly used by the RAF and Navy to listen for German E-Boats and U-Boats. Following the wars, Sheringham continued to function as a fishing and tourist community, complete with a carnival that runs annually since 1950 and a lobster festival that started in 1994.

Today there are all the quaint hallmarks of its interesting past as well as more modern features such as the RNLI building and the recently built windfarm. The town continues to attract large amounts of tourists and has plenty to do and see – more on this below.

Things to Do and See in Sheringham

Before we discuss some of the things to do and see in Sheringham, it is worth mentioning that the town has a big parking problem. Given that it is a small community, there aren’t many open spaces within the town and as a result, car parking seems to be an afterthought.

The Tesco carpark provides 2 hours free car parking and there are a few other carparks dotted around which are pay and display. The trouble is that none of the carparks are particularly spacious and if you drive a reasonably sized or expensive vehicle, you may not want to park in them as the chances are that someone is going to open a door and scratch your car.

Unfortunately, I haven’t yet found a solution to the car parking issue and have pretty much just ‘made do’ on the number of occasions that I have visited the town. Hopefully in the future a larger car park with more generous parking is opened. A word of final warning, the Cliff Car Park is both expensive and very confined, making it a very poor parking option.

Parking aside, here are the things to do in Sheringham.

If you’re visiting Sheringham Park, you can disregard everything I just said about parking as it has its own dedicated car park operated by the National Trust. Bear in mind that Sheringham Park is a fair distance from the town, so it isn’t really ideal for those looking to visit both.

Sheringham Park is a modest hall (as stately homes go) set in beautiful grounds. The Hall itself isn’t open to the public but the grounds and walking trails are. It does have an admission fee of sorts with the parking costing £6.50 per car.

Make sure you visit the national trust website for further information including any events that they may be holding at Sheringham park.

If you want to urbex a bit more, the town itself has a few points of interest that the council has cheekily applied blue plaques to. While not the official blue plaque scheme, these plaques showcase points of ‘local’ interest.

I am unsure how many there are in total, but in wandering around we discovered at least nine – all with varying degrees of interest. While I certainly wouldn’t advise visiting the town just for the plaques, it is a nice little addition when exploring to have a bit of information about the buildings you’re looking at.

Another point of interest that you can easily spend half an hour to an hour looking around is Sheringham Market. The popular outdoor market is open every Saturday as well as on Wednesdays during the summer months.

The market stools are surprisingly varied and even though we ventured in expecting to only look around, we did end up parting with a bit of money by the time we had left.

Sheringham high street is most definitely focused on tourists and has all of the wonderful tourist shops you would expect to find including old fashioned sweet shops, souvenir shops, amusements and the like.

The thing that makes the high street more enjoyable than some other tourist traps is that the shops are filled with quite interesting things and you can easily spend an hour or so looking around the different shops and making small holiday purchases.

Given that there is a distinct lack of sand at Sheringham, it is unsurprising that the beach is not as busy as neighbouring Cromer. But it is still a lovely beach to sit and enjoy the crashing of the waves and have a quiet moment of reflection after a busy little day exploring.

If this blogpost whets your appetite for the history of the town, then Sheringham museum will undoubtedly fill out much of the backstory that I have outlined above. Unfortunately, there is an admission price that is currently £4.50 for adults and £2.50 for children between 5 and 12 year’s old.

I say unfortunately because the cost of admission is a bit steep, and the exhibits are only really going to appeal to a certain demographic – which I imagine leaves many feeling as though they got poor value for money when visiting.

If you like boating exhibits and the like though, you will find the admission charge a bargain.

Now, my final top tips before you plan your day to Sheringham.

And that’s it really, Sheringham is a great day out and well worth a visit if you get a chance. And now you have a bit of history attached to some of the things you might see when you get there.