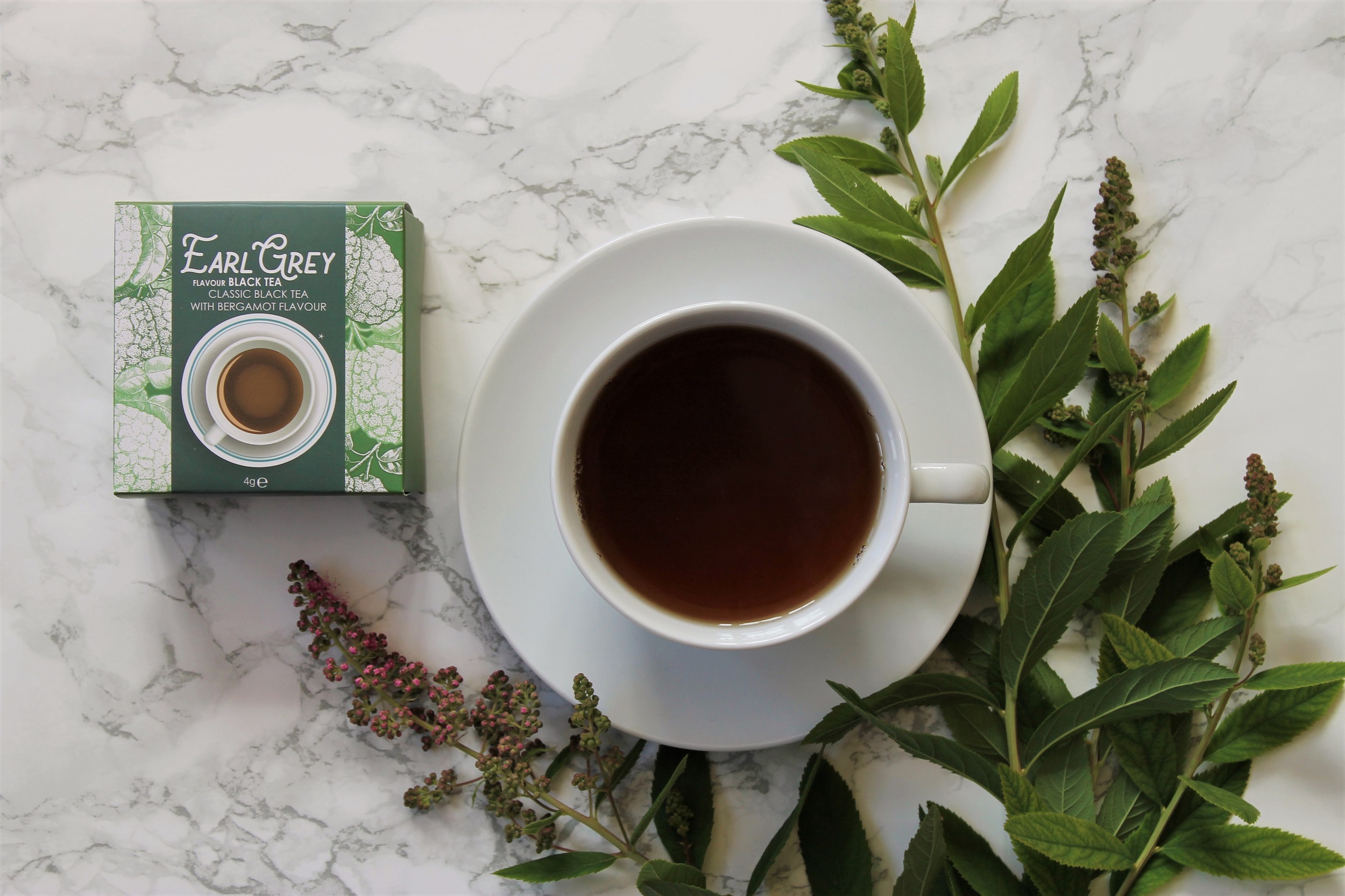 Sometimes, I just can’t resist. I know, I have a problem.

We only popped into Tesco for some water and to fill a prescription at the pharmacy, but yet again I walked out with a new box of teas! This is my review of Fosters Earl Grey tea, the first in the box of 9 teas by Fosters Traditional Foods.

Supermarket teas can be hit and miss. On the one hand, you find gems like Pukka, Teapigs, and Twinings herbal teas… but on the other, you find more obscure brands and supermarket own brands that are always a bit of a gamble.

I took that gamble when buying this black tea with bergamot and this is what happened.

A standard Earl Grey tea. Nothing fancy and very easy drinking! It’s a smooth cuppa that you could serve up to any guest – tea connoisseur or not – and they’ll soon have a smile on their face. 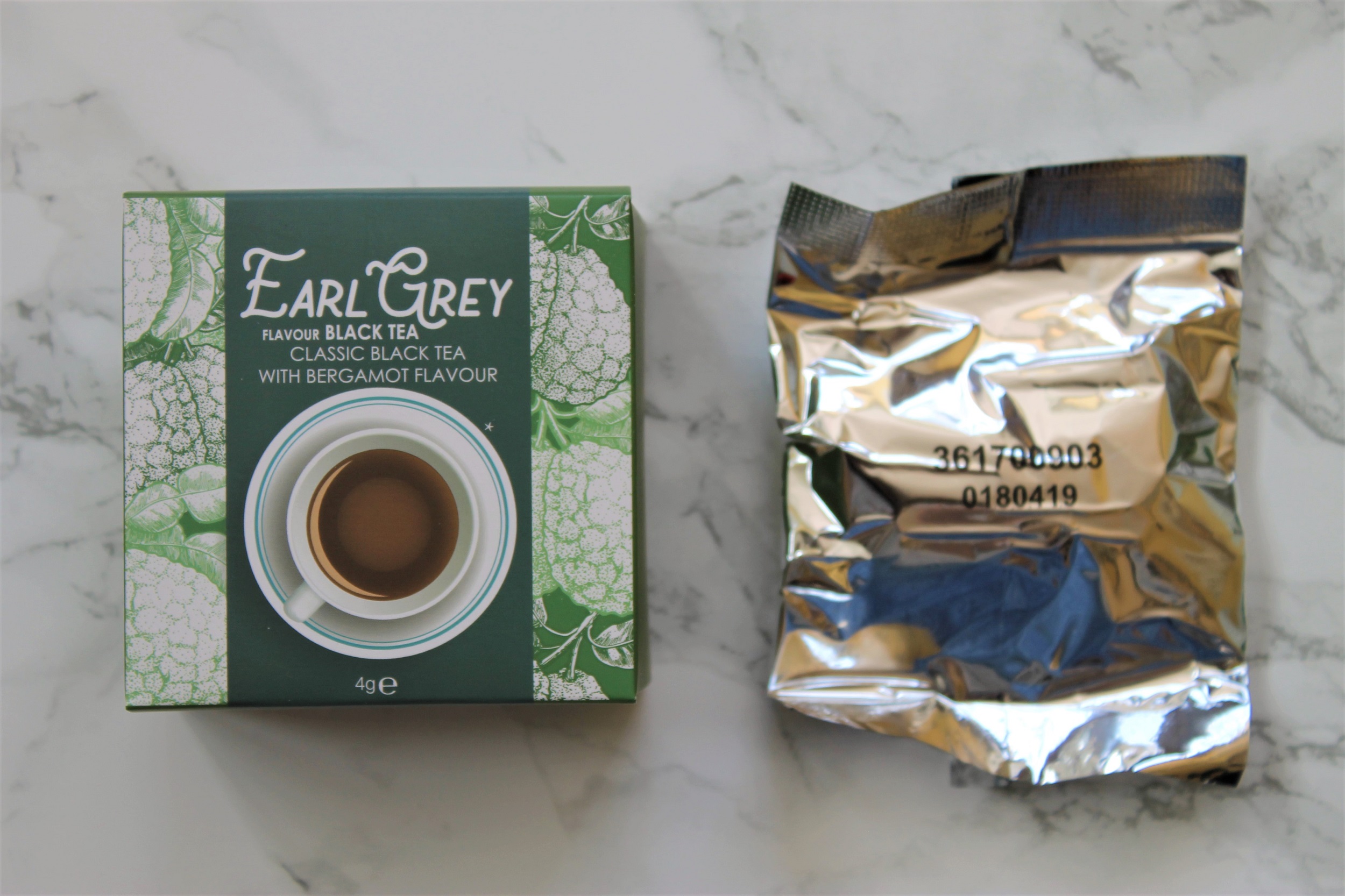 Ripping open the foil wrapped packet, I found 4 teabags in the little cardboard box. That puts the amount of tea per teabag at a measly 1 gram, compared to the standard 2 grams. Not a promising start!

The aroma, however, was enticing. Strong lemony bergamot notes hit my nose with astringent black tea. Altogether, it smells fresh and bright.

It brews into a dark brown but clear tea colour that’s perfect for drinking straight – although adding milk wouldn’t be an abomination. The steam that swirls out of my cup has that bright lemony bergamot aroma. It’s quite obviously fake flavouring, but it’s pleasant nonetheless.

I downed the cup with ease. It’s so smooth, washing over your tongue with that classic refreshing Earl Grey taste. That’s about all there is to say about this tea. It’s basic, simple, well-made and does the job. 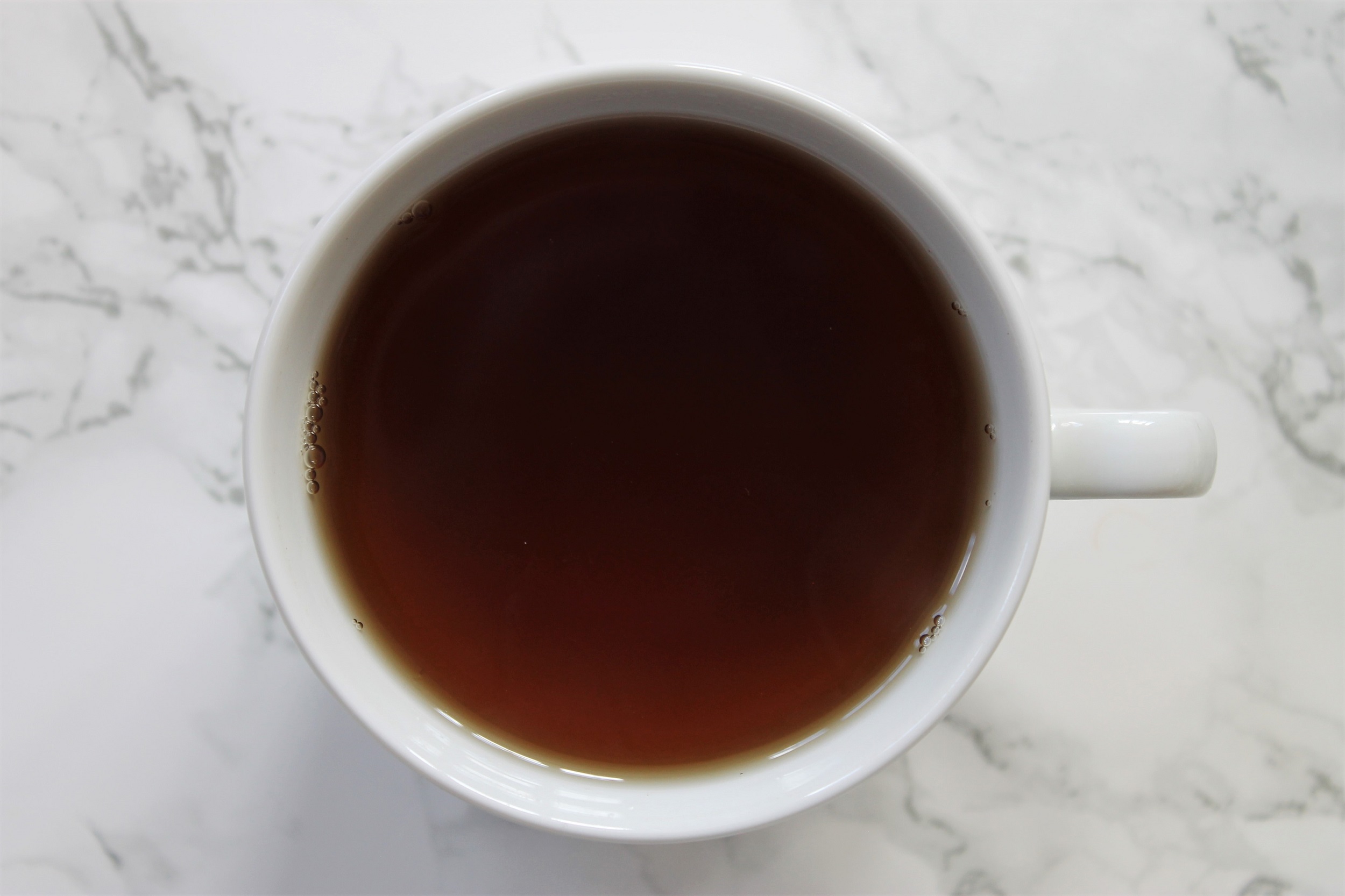 I’ve seen some vague tea brewing instructions in my time but this really does take the biscuit. On the back of the tea box is written:

“For the perfect cuppa we suggest adding one tea bag into a cup of hot water. Once brewed to perfection remove the tea bag, leave to cool and enjoy.”

First of all, forget hot water. You want freshly boiled water from the kettle. I know it sounds obvious to us Brits but for some of our American cousins I feel it’s a good idea to point that out. Don’t just get hot water from the tap.

I brewed for 2 minutes using 100°C water, which was perfect for drinking without milk. If you like milk in your tea, brew Fosters Earl Grey Tea for 3 minutes at least to get a stronger flavour.

Serve with digestives, bourbons, or any biscuit you have in the cupboard.

There’s not much known about this brand online – they’re certainly not a tea brand. Instead, Fosters Foods creates gift boxes and confectionary yummy things that you’re likely to find in gift shops and supermarket aisles. They are a British company.

The Tea Time Assorted Tea Collection that this Earl Grey arrived in is part of the Treat Co product line… and that’s about all I can tell you! 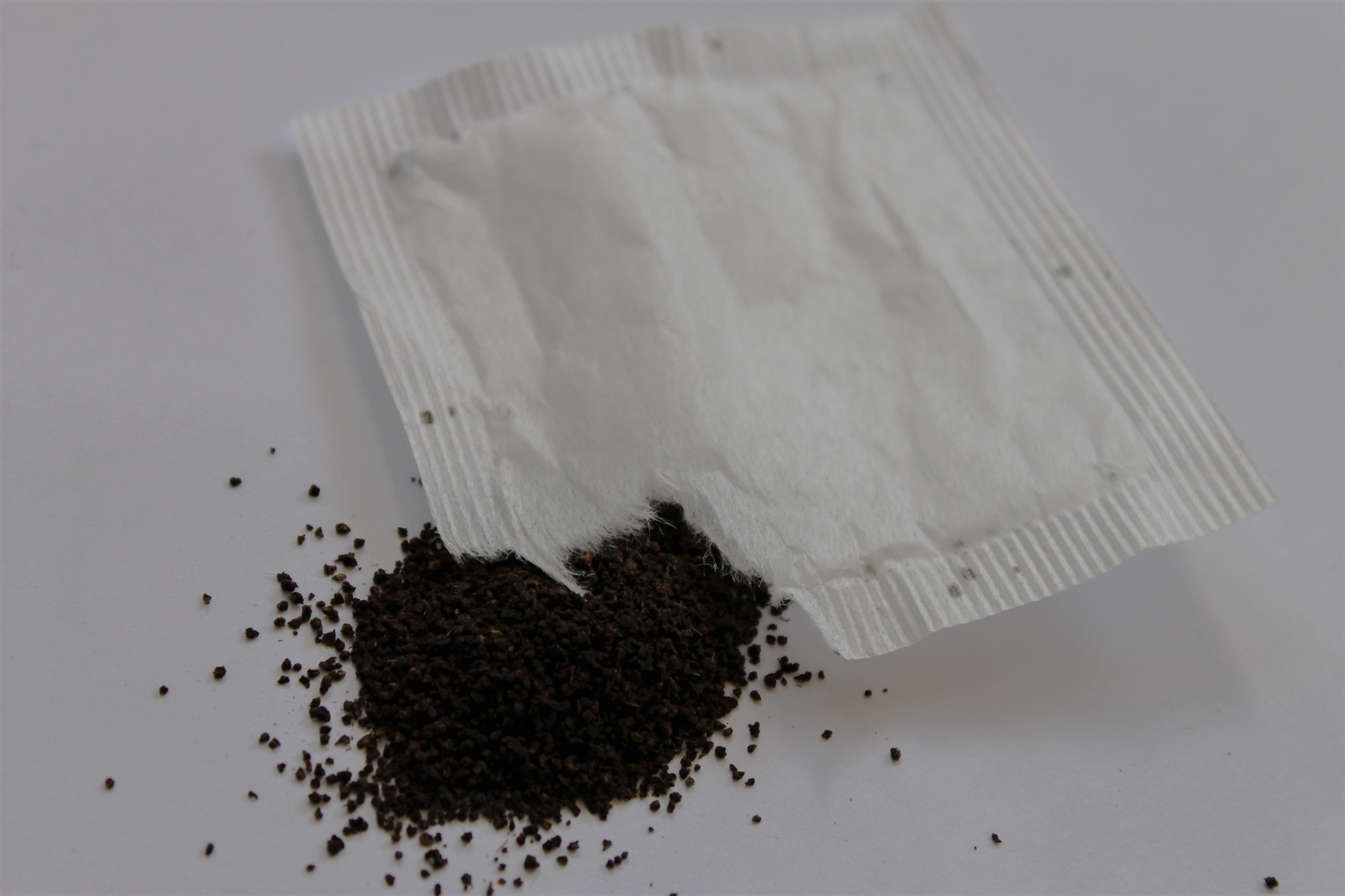 On the back of the packaging it tells me that the teas are a “product of Sri Lanka” and that they’re assembled into the tea collection in China. The quality of the tea is standard for tea bags, although I was impressed with the foil wrapping that kept it very fresh and flavourful.

I wish there was an organic or Fairtrade certification for it.

I recommend this tea as a standard tea. You could serve this to anyone that came round for a cuppa, even if they aren’t an avid tea drinker like you are. The flavour is smooth and pleasant, albeit basic. For the tea lover it may be a bit boring, but as a gift set with other classic teas, this makes a lovely gift for the novice tea drinker.

Check the gift aisle in Tesco. If it’s not there, I’m afraid you may be out of luck. 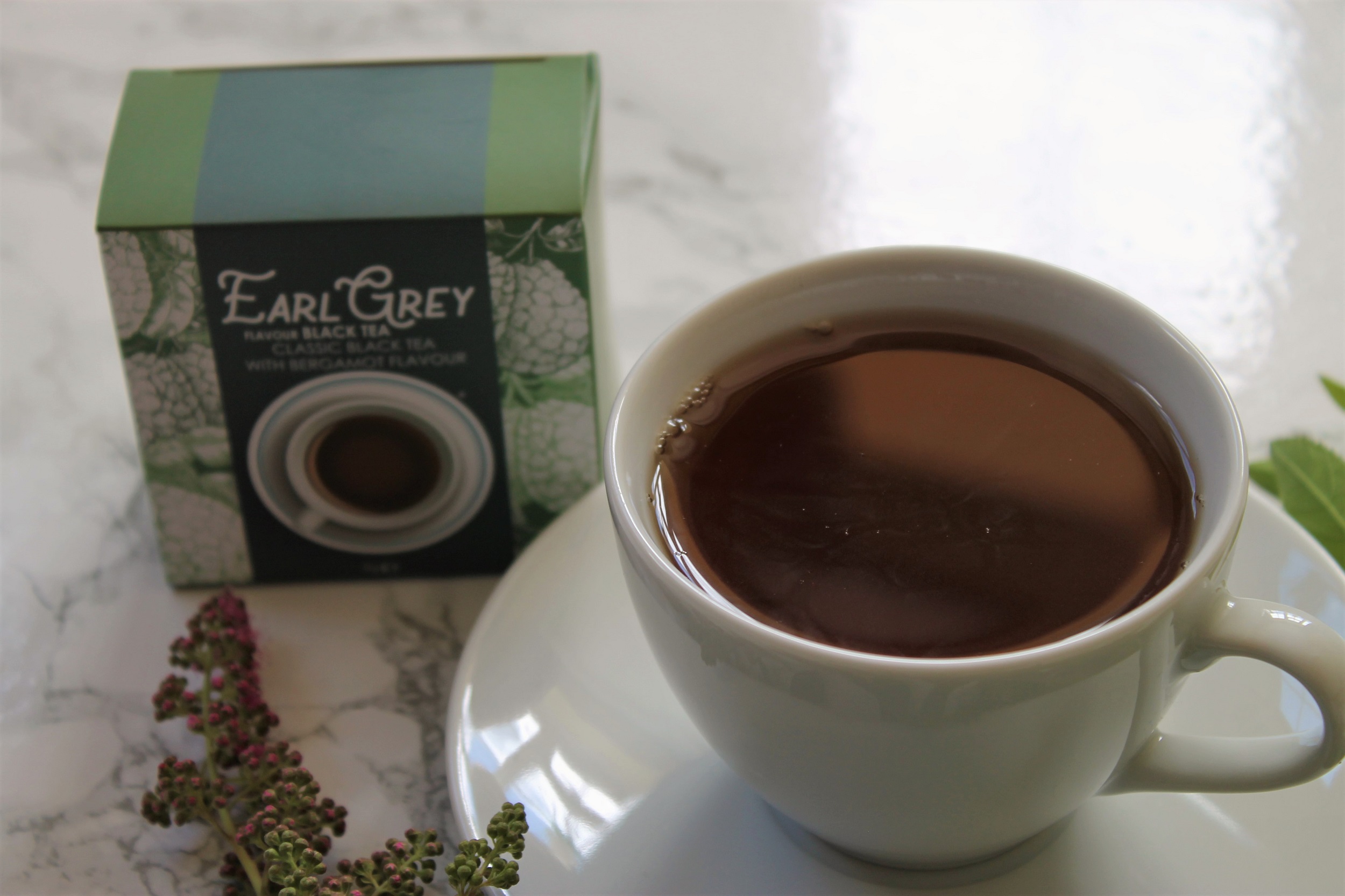 If you’re on the hunt of standard, everyday teas that you can serve up to anyone, then I recommend taking a look at my review of Teakruthi Colonial Mornings next. It’s loose leaf black tea, but don’t let that intimidate you.