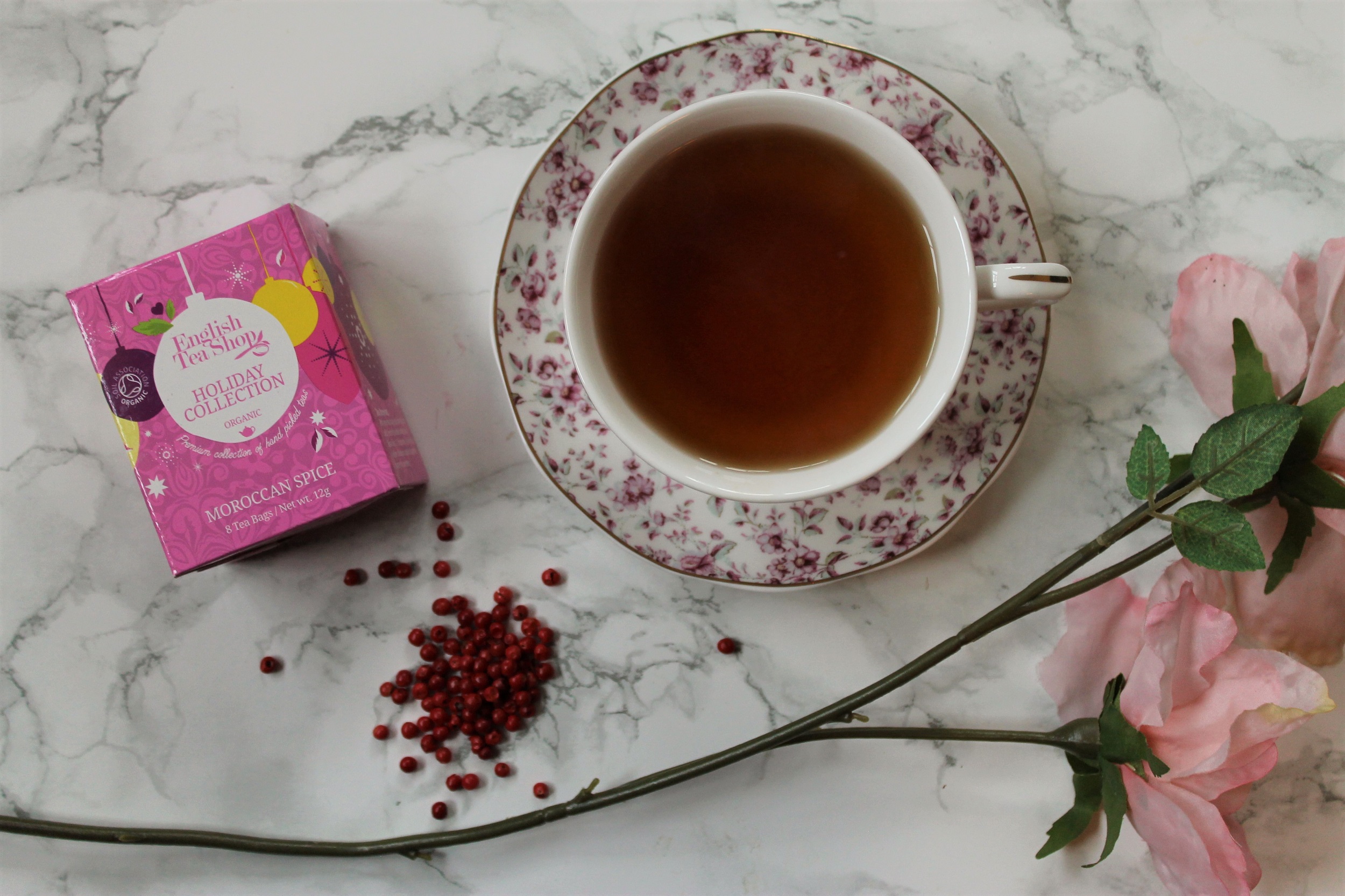 Naming a tea Moroccan Spice is a sure-fire way to get my attention! This spiced herbal blend by English Tea Shop contains some of my favourite spices. It’s almost like a chai, with cinnamon and ginger pieces.

This tea is from the Holiday Collection Red Bauble tray and after a long afternoon hunting for this tea online, I just don’t think it’s available to buy separately. So, use my affiliate links below to find the bauble tray on Amazon so you can try this tea and 11 other blends.

In my full review of English Tea Shop Moroccan Spice, I’ll cover what the ingredients are, how it tastes, and how best to brew it.

This is a pleasant herbal tea… but watch out! There’s a hidden kick from the ginger in the aftertaste that’s so spicy it’s almost peppery. You might like this herbal tea with a drop of honey. 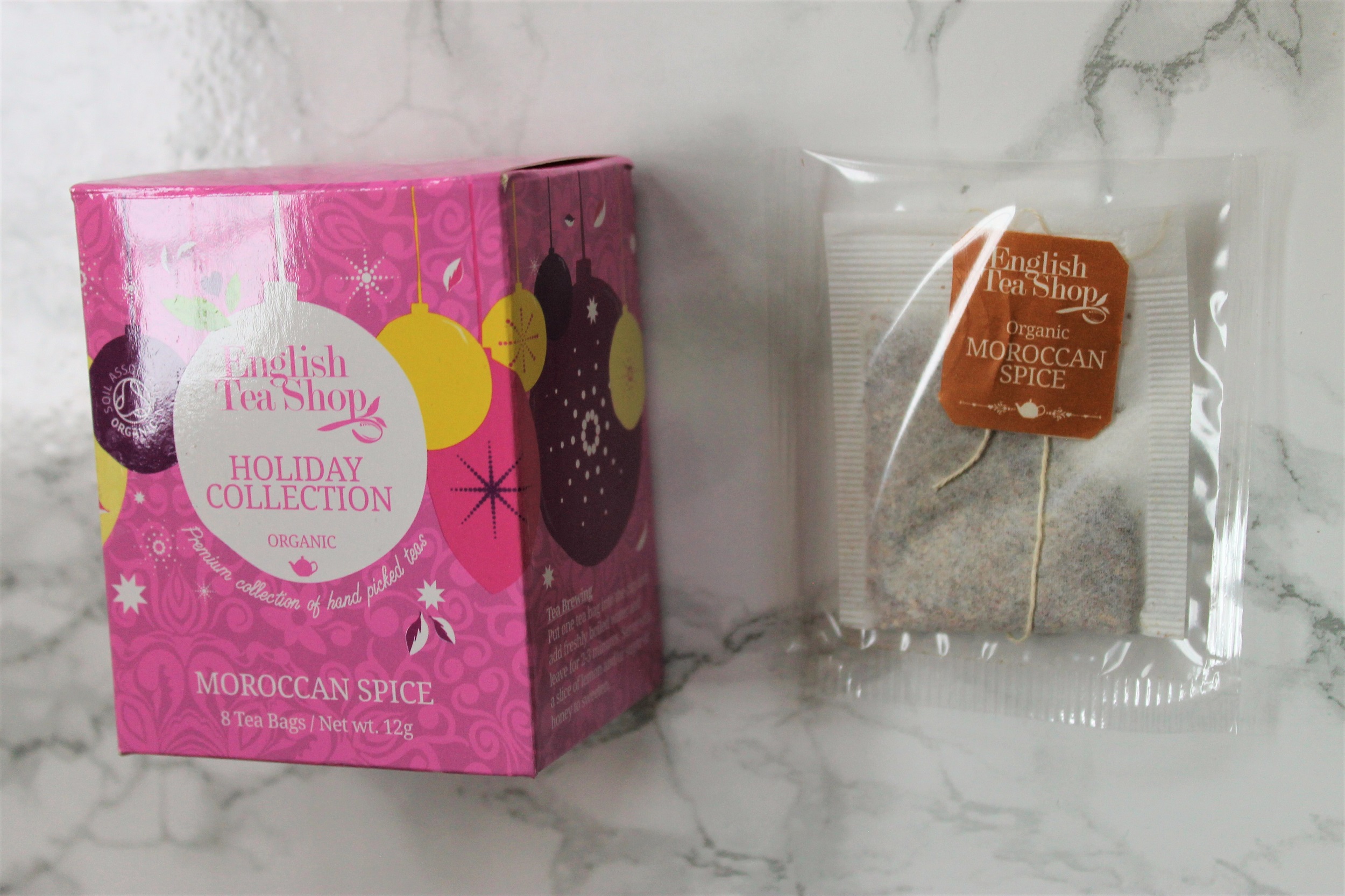 I’ve had some hits and misses with the English Tea Shop teas from the holiday collection, but this one is a firm hit. The initial aroma when you rip open that clear plastic wrapper (so satisfying!) is slightly musty but heavily spiced. Cinnamon and chamomile are the notes that strike me first, as there’s that sweet hay note dominating everything. Next, there’s a hit of cumin which gives the tea a unique savoury note. It’s interesting, to say the least.

If cumin tea sounds bleh to you, bear with me. It gets better.

You’ll end up with a light cinnamon brown tea that you’d be mistaken for thinking was black tea. This is definitely a caffeine-free herbal blend.

The aroma has completely transformed with the addition of hot water. It’s now a liquorice and peppermint dominated herbal blend. Refreshing, sweet and slightly musty with that chamomile scent pulling through.

It’s odd – there’s no chamomile listed in the ingredients!

As for the flavour, it’s not as strong as Moroccan ‘Spice’ would have you believe. The peppermint is the first note you can pull out distinctly after a few sips. Once the flavour builds, you get those mixed herbal flavours with cinnamon sweetness and a hint of ginger.

Boom. Then the aftertaste kicks in. A fire from the ginger is so strong it almost feels like black pepper on the back of your tongue!

Overall, it is a very pleasant albeit unusual tea to drink. 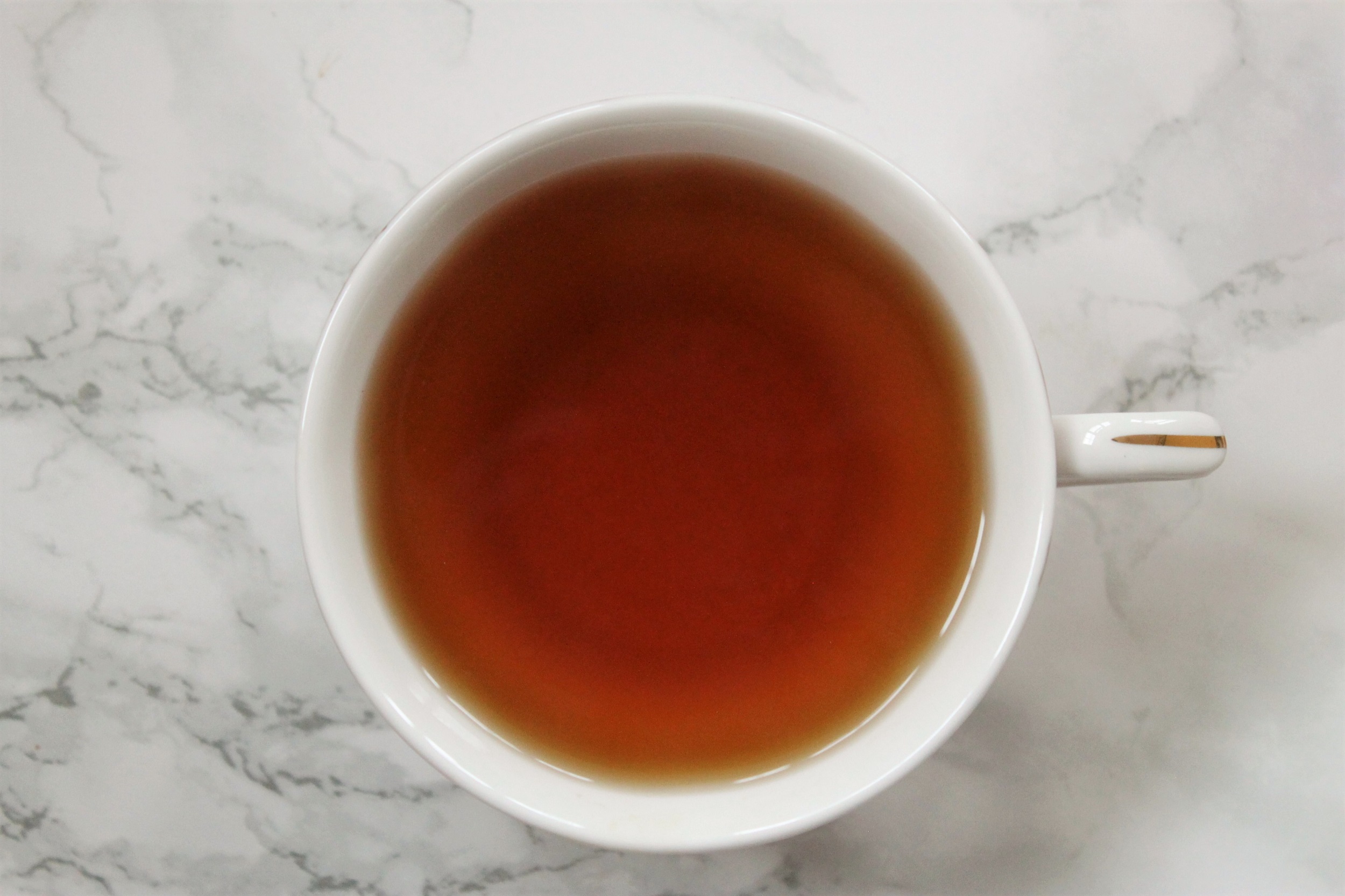 The instructions from English Tea Shop are to brew in freshly boiled water for 2 to 3 minutes. I disagree. For a light herbal tea, brew for 5 minutes. For a strong, spicy cinnamon tea, brew for 10 minutes.

I’m not sure what it is about these ETS teas, but they just perform so much better with very long and hot brews.

Although the spices are very chai-like, I wouldn’t advise adding milk to this tea. It just isn’t strong enough. A teaspoon of honey, however, would be very satisfying.

I’ve been really impressed with English Tea Shop pyramid sachets in the past. They usually contain whole leaf pieces, natural flavourings, and certified organic ingredients. These teabags? Not so much.

Even though Moroccan Spice is certified organic by the Soil Association, it’s still not an amazing tea. The herbal pieces are finely chopped and dusty, rather than large cinnamon chips and ginger pieces. This helps them brew faster but isn’t always great for flavour.

I also dislike how little tea is included in each teabag. There’s 12g of tea in the 8 teabags – approximately 1.5g per bag. This could be another reason why these teas are quite weak and take so long to brew.

There’s no shame in doubling up when you brew! Go ahead and use two teabags per cup if you like. 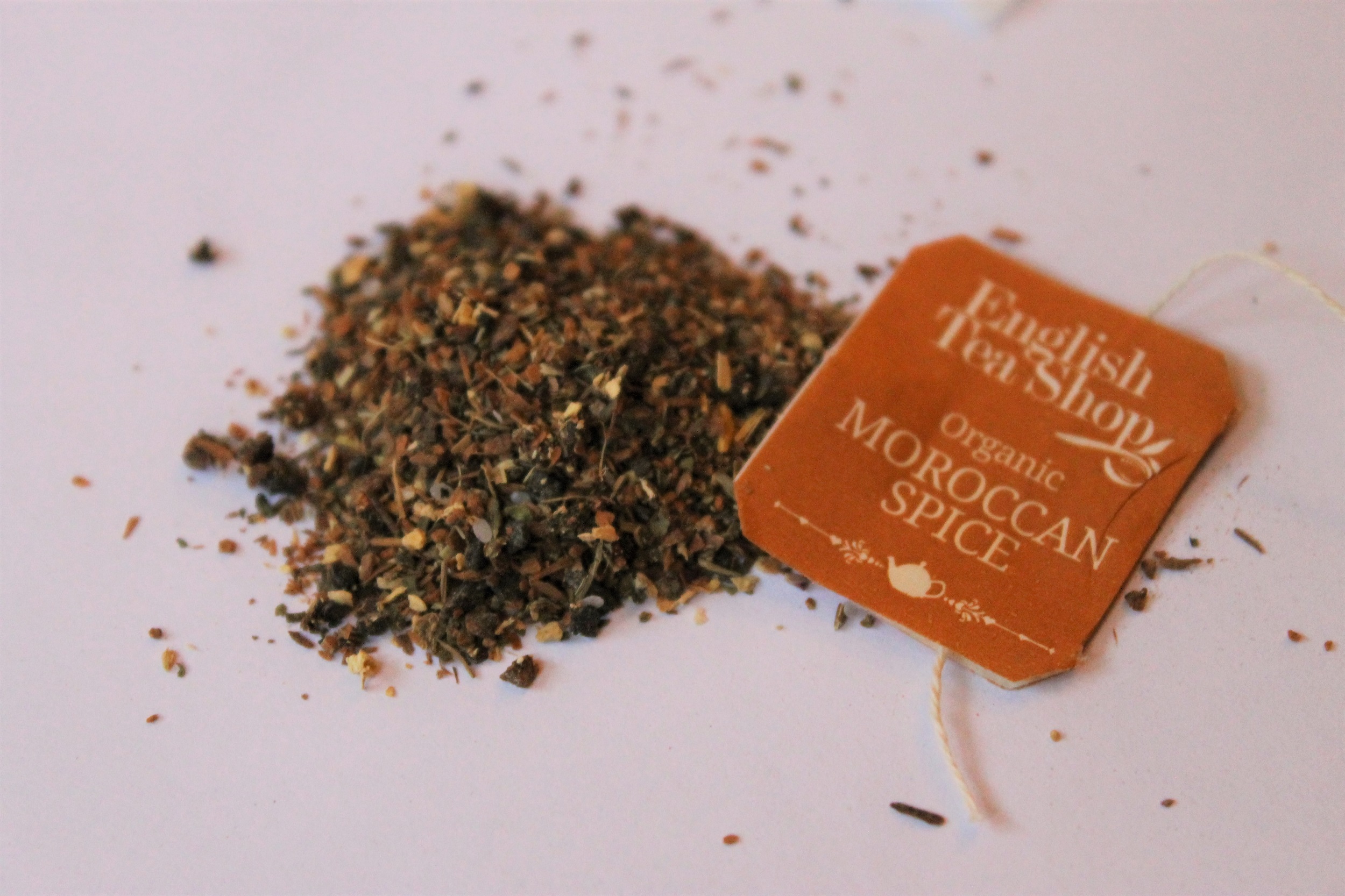 The main ingredient in ETS Moroccan Spice tea is cinnamon. This woody sweet spice makes up 39.5% of the tea blend, with chicory next on the list at 28% and liquorice at 10%. According to BBC Good Food, one of the main health benefits of cinnamon tea is for digestion. Cinnamon has also been used throughout history to relieve numerous ailments, thanks to its anti-bacterial/anti-fungal properties! It’s a common ayurvedic medicine ingredient too.

I haven’t noticed any significant changes or improvements to my health since drinking this tea, but it’s good to know that this tea is doing my body a world of good regardless.

On a side note, you shouldn’t drink excessive amounts of this tea, especially if you suffer from hypertension, because of the liquorice content.

This is a really lovely tea! Whether it’s worth buying the entire holiday collection tray to enjoy it is another matter… Make sure you read all my English Tea Shop tea reviews here on the blog so you can judge whether the 12-blend tea selection is a good choice for you. Find it on Amazon using the button below. 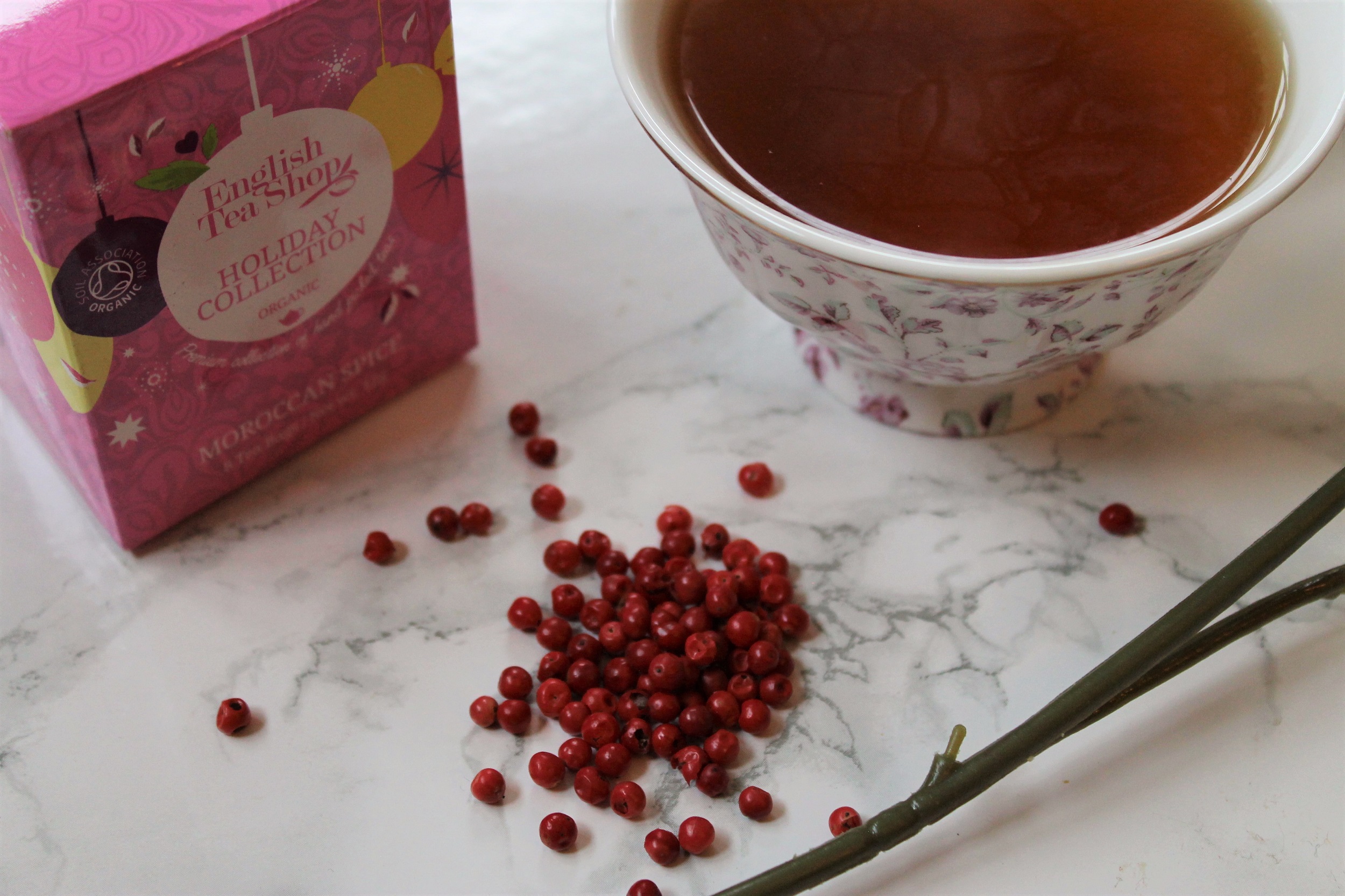 How about something simpler? When my collection of spiced teas have thoroughly knocked my socks off, I reach for a soothing single origin tea. This week I’m sipping Teakruthi Ceylon Ivory, a naturally sweet white tea with notes of honey, pear and lilies.