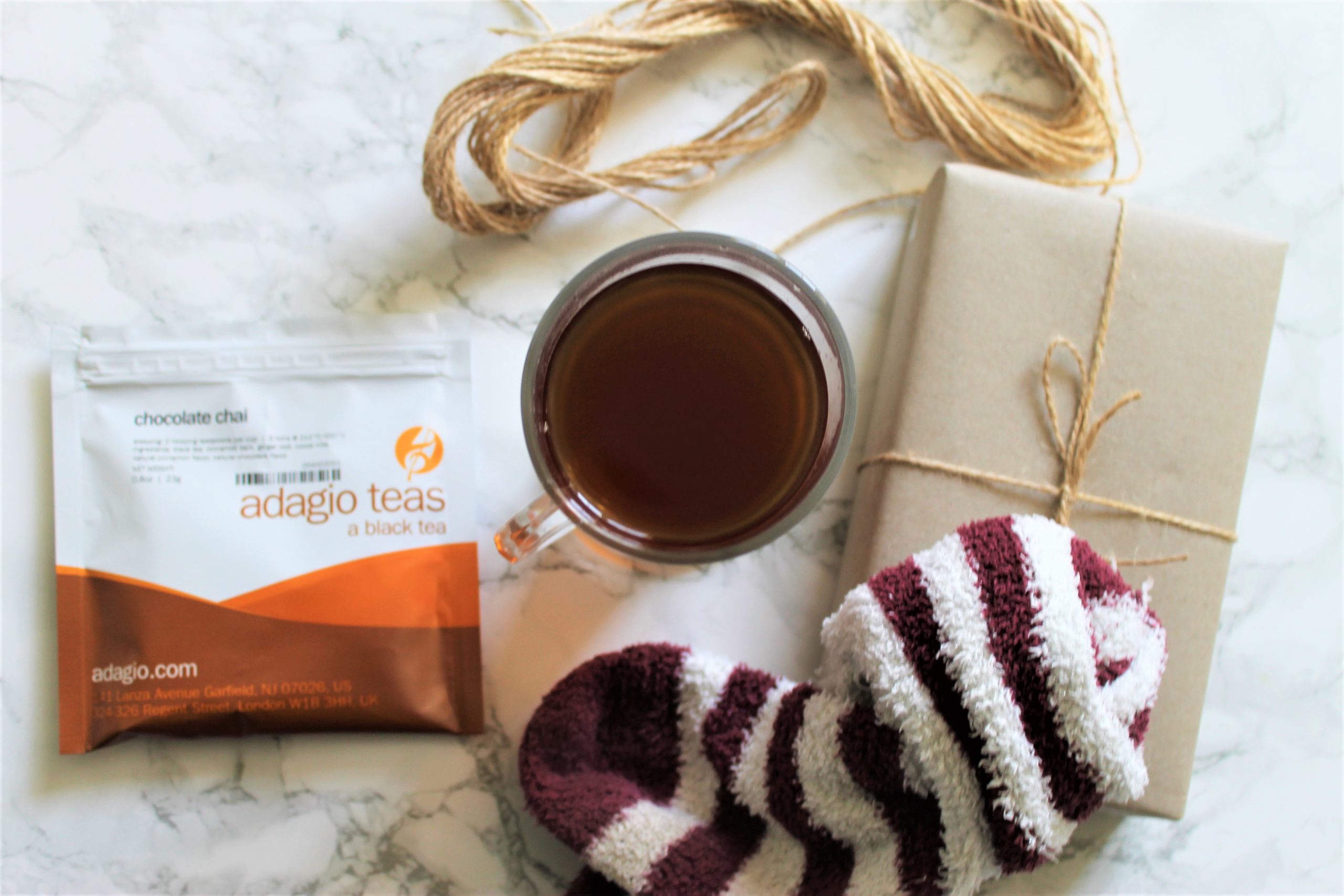 Adagio Chocolate Chai is an intriguing tea. If, like me, you have no restraint when it comes to chocolate, you’ll love it. It’s awesome if you’re trying to cut down on calories but still need your chocolate fix. Think of it as a caffeinated hot chocolate!

If you’ve tried this tea before and couldn’t get your head around the combination of chocolate and tea, you need to read this review. My prep method makes all the difference.

Find out how I got on with this chocolate tea below.

Adagio Chocolate Tea at a Glance

A seriously delicious but high-caffeine tea! You can get 2 good steeps out of this blend, creating a rich, chocolatey tea. Goes spectacularly well with milk and honey. 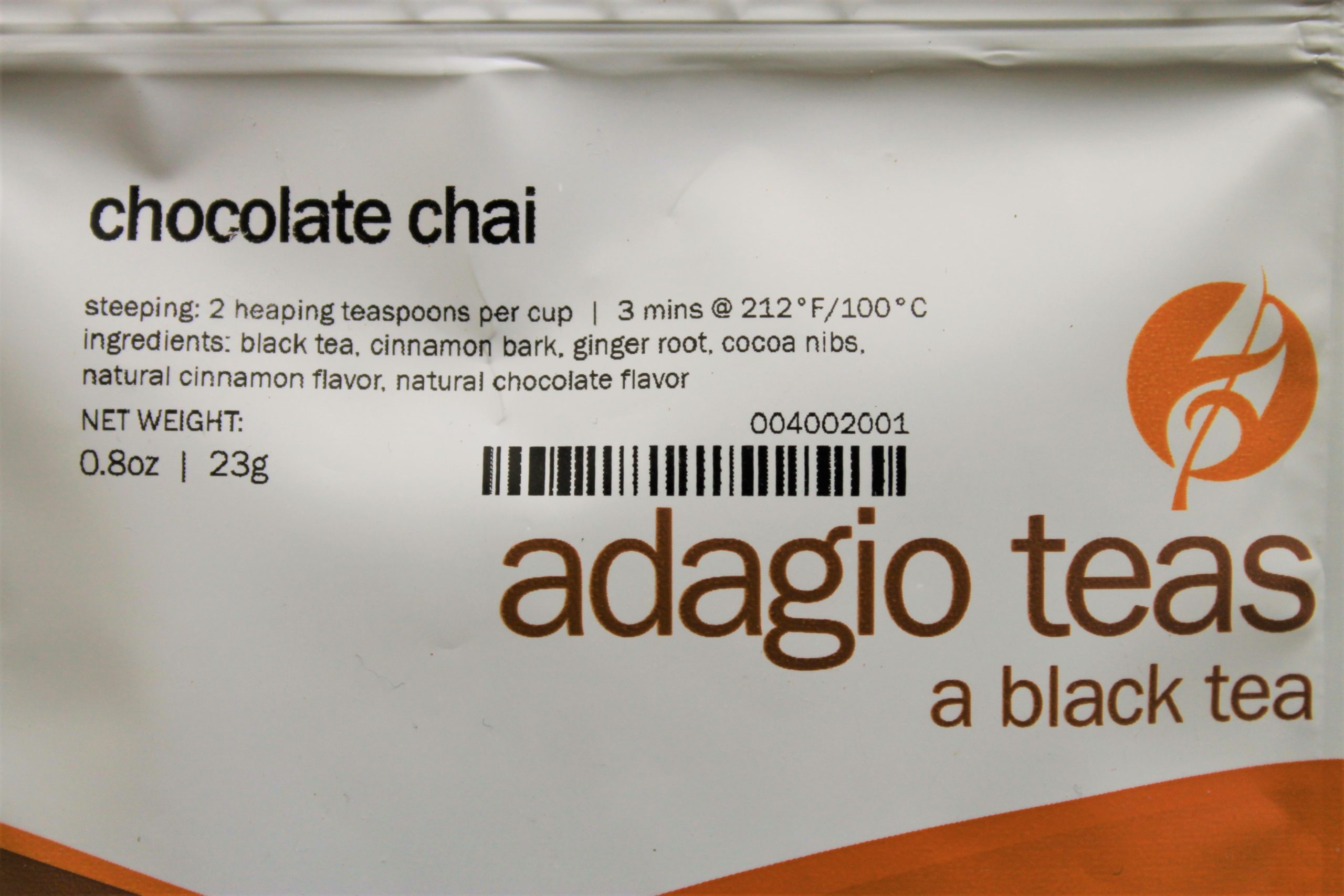 Opening the sample packet (don’t make the same mistake I did. Order a vast amount of this tea, it goes fast) I’m really enjoying the chocolate and spice aroma. It’s not sickly milk chocolate, instead it’s pure dark chocolate. The rough and bitter kind that smells great but never quite tastes as sweet as you want it to be. There’s also a slightly nutty tone along with notes of ginger and undistinguished spices.

It brews into a dark, murky mud brown tea with a thick texture. The aromas leaking out of my teapot as this brewed were dark and natural. There’s a bitterness to the chocolate and also a smooth black tea note that wasn’t present in the dry leaf aroma.

I reviewed it black for the purposes of this review. I’m instantly hit with Bournville cocoa powder. We used to mix this with Cadbury’s chocolate drinking powder to add more depth to our hot chocolates when we were kids. It’s not sweet, it’s dark and very rich. The black tea forms a light base to compliment the chocolate with a hint of cinnamon lingering in the aftertaste. 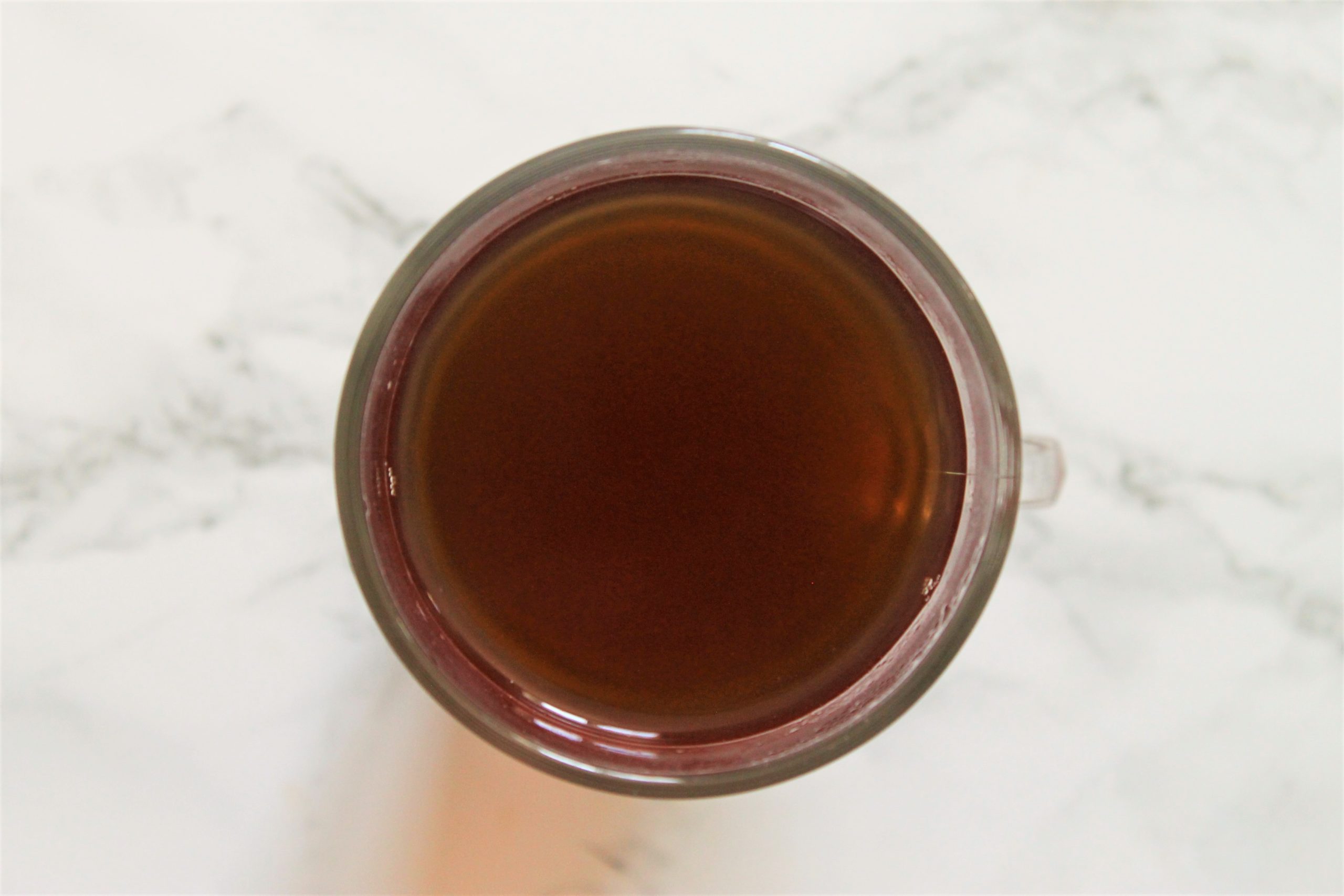 How to Brew Chocolate Black Tea

Instructions from Adagio are to brew with boiling water for 3 minutes. After a few tries, I found that lingering closer to 4 minutes produced a better tasting tea. I also used almost 3 heaped teaspoons, rather than the 2 they recommend. I wasn’t joking when I said this tea goes fast.

The good news is, the second steep of the tea leaves is usually just as good as the first.

As for my prep method, I brewed the tea strong and let it cool a little down to 70°C. This step is important. Next, I added a teaspoon of honey (adding honey to boiling temperatures ruins the health benefits) and a slow drip of unsweetened coconut milk until it was the colour of milk chocolate.

The coconut was hands-down the best milk to add. I also tested soymilk and normal dairy milk (both full-fat and semi-skimmed) but the coconut was best. Give it a try, it’s so silky and filling!

Adagio sent me their full range of Autumn and Christmas teas this year to review for the blog. Working through them all has been a real pleasure. This Chocolate Chai tea arrived in a resealable pouch, sample size. You can also buy large sizes or get it in pyramid tea sachets. 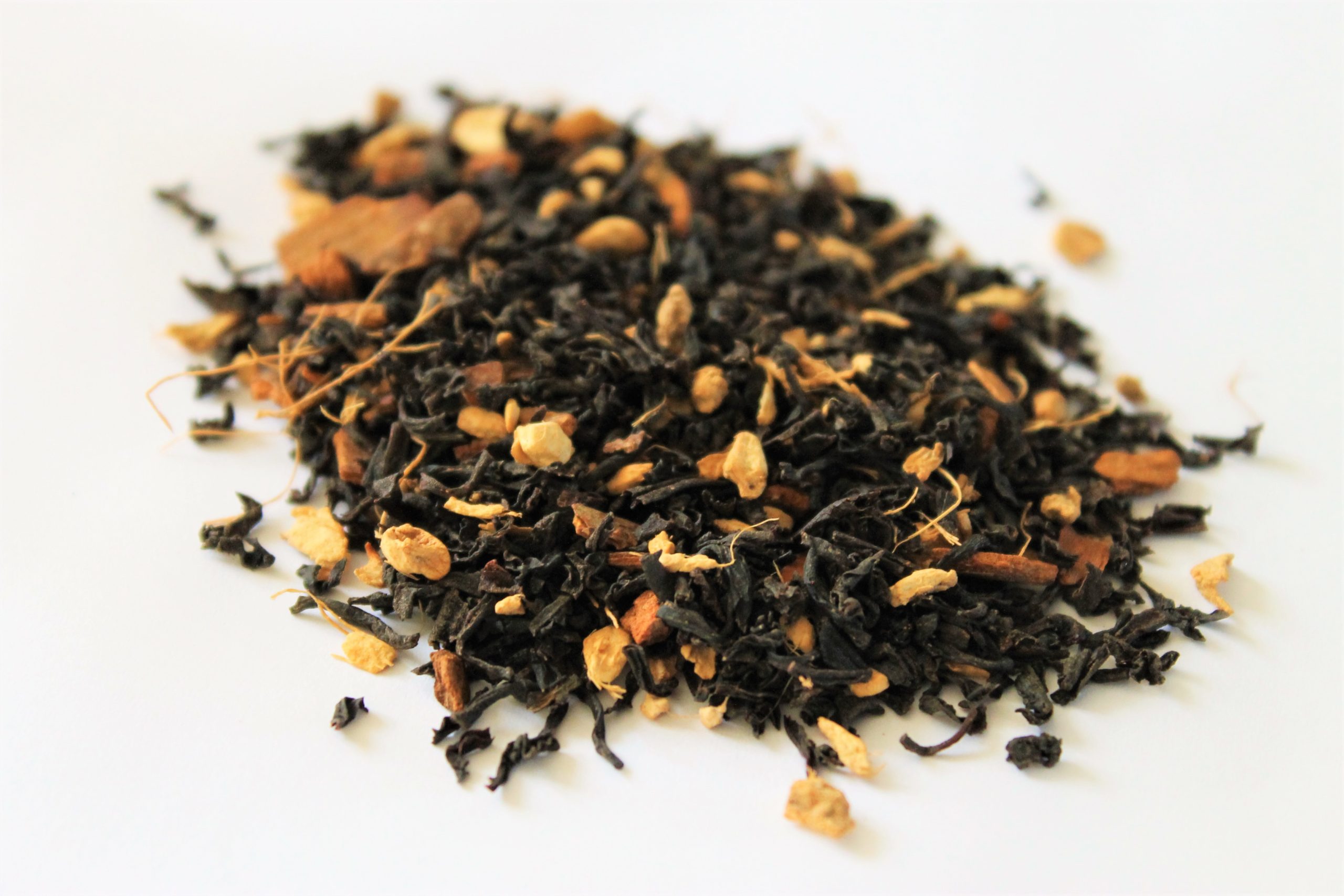 The quality is great. The real cocoa nibs (which are surprisingly good for you) add such depth of flavour while the cinnamon chips are perfectly balanced to create a nice spiced aftertaste. The added flavouring is natural and only enhances what’s already there. The result is a very authentic tasting tea and one that would make an excellent Christmas gift for both chocolate and tea lovers.

Yes, yes and YES. I definitely recommend this tea. Get your hands on a sample sized pouch and give my honey and coconut milk recipe a go. It really lifts the tea! You can find it in the UK and the USA at Adagio. 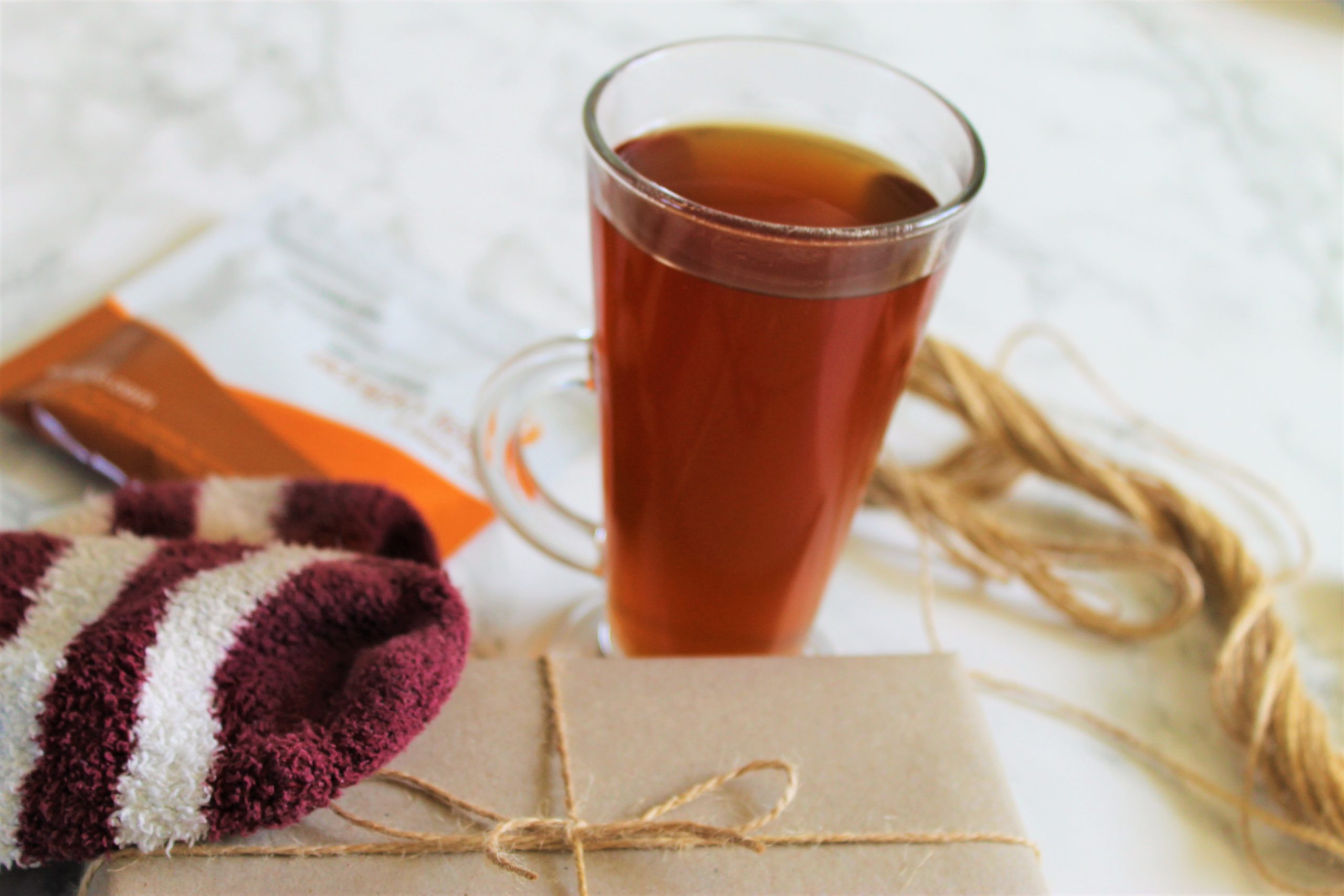 In an indulgent mood? Check out my full review of Whittard Glitter Tea. Black tea and caramel – it sparkles gold! It’s an awesome Christmassy tea with sweet notes and a robust black tea base. You’ll love it, trust me.