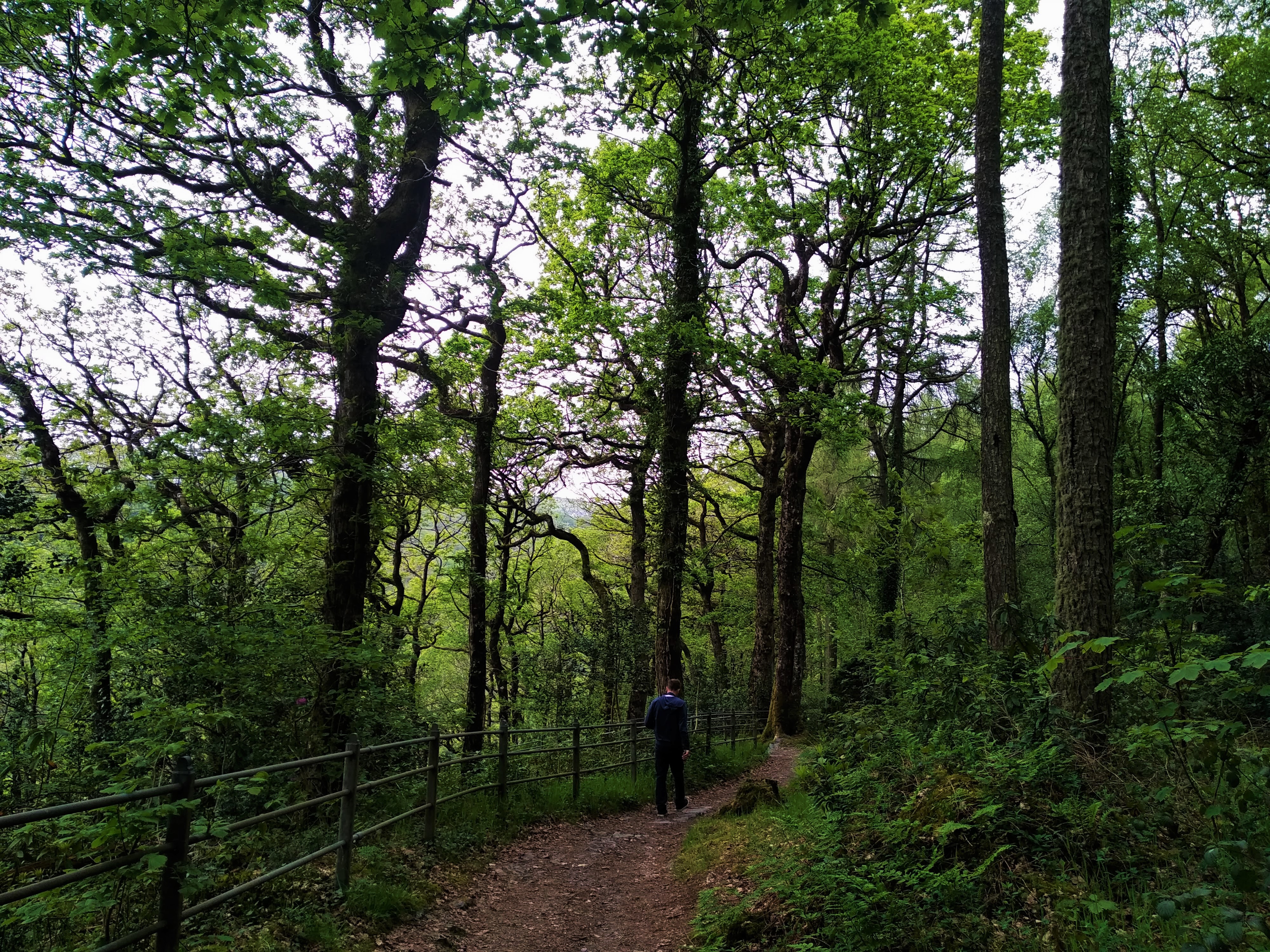 Once upon a time, there was a river that ran through a sleepy and quiet part of Wales. Its source was a lake high in the Cambrian mountains and for the most part it meandered lazily through green and lush countryside. But it doesn’t always flow calmly and when it reached a point by an abbey it cascaded sharply in a series of plunging waterfalls.

The abbey was a place of worship and housed both monks and, in a separate adjacent commune, it housed nuns. These types of abbey were known as double houses. The religious folk worked hard supporting the abbey, relying on the land around them and farming to sustain themselves.

On his wanderings and roamings, the Devil heard of the monks and nuns who lived high in the hills away from the world in a rich and green land known as Wales. He heard they were extremely devout and this tempted him to test how spiritual they were. He made a wager with God, saying;

“I wager that within one week I will have the soul of one the nuns at your precious abbey.”

God knew the hardworking people of the abbey well; he could see their hearts were pure and their minds were chaste. He replied;

“I agree, but if you fail to claim just a single soul, you are never to step foot in the garden that I call Wales again.”

The Devil laughed and said;

“If I win, I want Wales as my domain for ever more!” By now hopping eagerly and greedily from one hoof to the other.

“As you wish.” Before turning and leaving.

The Devil licked his lips and rubbed his hands together with glee as he set off happily to Wales. He was sure that within one week he would be able to claim at least one soul from this sleepy little abbey. He hopped and skipped and before long he had crossed the border into Wales. It was a beautiful country and he was absolutely thrilled that he would be able to claim dominion over it and call it his home.

Meanwhile, the abbey was its usual hive of activity. The monks and nuns both worked hard rearing sheep and making woollen clothing to give to the poor and needy. By sundown everyone was tired but accounted for except for Sister Gwen who had been left to count the sheep before locking them up for the night.

Sister Gwen wasn’t one for getting bothered easily and she certainly wasn’t one for cursing. No matter how many times she counted the sheep though, she came up one short. Thinking it best to check she headed out to the pastures on the hill to see if she could find the lost sheep. From the hillside she caught the last of the sunlight and also spotted the straggler. Unfortunately, the straggler was the other side of the river and it was not only treacherous to attempt to cross but the sun was fading very fast.

“Hi there!” Came a cheery cry from behind her. Little did Old Sister Gwen know but she was just about to come face to face with the Devil himself.

She about turned and answered the young man who stood before her.

“Is everything okay?” Asked the Devil. “You look troubled.”

“The last of our sheep is stranded across the river on the bank up yonder. The river isn’t safe to cross though and it will probably perish now.” She answered with a sorry sigh.

The young man’s smile broadened and he rubbed his hands together.

“I could build you a bridge, it would take me a bit of time but in the meantime, I will make sure the sheep is fine until it is finished. It should take me no more than a few days.”

Sister Gwen placed her hands together and silently thanked God in prayer before answering the young man.

“That is wonderful, but I have no money or means to pay you for your kindness.”

“Oh, don’t worry.” Said the young man, “In return I only ask for the soul of the first living thing that crosses my bridge.”

Old Sister Gwen was puzzled by the request, but in need of the bridge to retrieve the sheep she agreed. Losing a sheep would be terrible for the abbey.

“Excellent.” Said the young man, I will set to work tomorrow at dawn.

That night Sister Gwen was uneasy about the conversation she had had with the young man, but she managed to push her worries to the side and get some sleep knowing that the sheep would be safe.

The next morning as promised the young man (who was the Devil in disguise) set about constructing the bridge. He cursed and muttered constantly as he worked as he hadn’t realised just how challenging it would be to ford the river at the waterfalls. Struggling on he kept in mind the wager with God and worked hard knowing that he would be rewarded with a whole country if he finished the bridge.

From the hillside the nuns and monks watched the man building the bridge. Confused, the elder monk approached Sister Gwen and asked her what he was doing. Sister Gwen informed the elder that he was building a bridge to rescue the stranded lamb and in return she had promised the soul of the first living thing that had crossed the bridge.

“I am very worried about the deal; I have promised my soul to God and now I am to forfeit it to save this sheep.” She said sadly.

The elder monk was troubled by the deal also. He patted the sister on her shoulder and said he would pray for her before leaving her to her duties.

The next day came and passed like the first, except the work was getting more difficult and the young man was cursing more. The bridge had begun to take shape and it wouldn’t be much longer before it was completed.

On the night of the second day, Sister Gwen sought out the elder monk as she was distressed at having to give her soul to the young man.

“You should pray and God will provide an answer.” This was all the advice the elder monk had to give.

It took a few more days of heavy labour before the bridge was completed. Sister Gwen had prayed religiously during that time and with each day a greater unease crept upon her.

On the seventh day the bridge was fully finished. The Devil, still in the guise of the young man stood eagerly awaiting the Sister. Sister Gwen rounded the hill at dawn and greeted the young man.

“You have built a lovely bridge. I will be able to save the sheep now.”

The Devil eager to close the deal responded.

“Thank you, as promised I have looked after the sheep and now you have a bridge to cross this dangerous river if you ever need to in the future. Feel free to cross it now and remember our deal.”

“Yes, I remember our deal.” With that she reached into her pocket and threw a ball of stale bread across the bridge. In a flash the abbey dog bolted out from behind her and across the bridge, happily bounding after the bread roll that had landed the other side.

“There.” Said Sister Gwen, “The soul of the first living thing across the bridge as agreed.”

The Devil was infuriated, raging he immediately transformed and fled in complete anger from the bridge. Leaving Wales far behind him.

The elder monk, who had been watching from afar, approached Sister Gwen.

“Sometimes Sister, you have to do the wrong thing for the right reason. Your dishonesty was for the betterment of all.”

He patted her shoulder, leaving her to cross the bridge and collect the sheep.

It is said that even without the wager with God that the Devil, so infuriated by the Sister, has vowed never to step foot in Wales again. The only trace that he has been there is Devil’s Bridge, the lowest bridge of three that crosses the waterfall at Pontarfynach.

If you enjoyed reading about Devil’s Bridge, keep an eye out for our guide to the walks and don’t forget to donate so we can keep bringing you new stories!